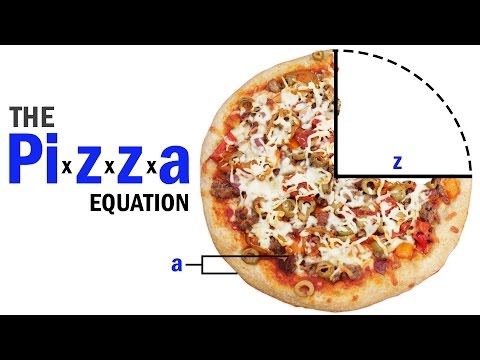 As the video above from ASAP Science illustrates the amount of extra pizza you get when you go up a size is almost always disproportionate to its price. For example, an 8″ pizza has around 50 square inches of pizza content (disregarding the ratio of pizza to crust, which is an important culinary factor). However, a 16″ pizza isn’t double the amount of pizza, like we might instinctively think. It’s actually four times as much, with 200 square inches of pizza. Yet you almost never find a pizza place where a small 8″ pizza is four times cheaper than a large 16″ pizza.

You can calculate your own pizza areas with a simple equation that you probably learned in middle school and have forgotten by now.

In other words, the area of a pizza is equal to the radius squared, times pi. Just plug in half of whatever size is listed on the menu into this equation and you’ll get your area. Then you can compare the price per unit to get the best deal. In almost all cases, you’ll find that the larger pizzas are better, but hey, it can’t hurt to double check the deal, right?