If you’re a cyclist, there’s a good chance you’ve thought about getting a GPS cycling computer so you can see mountains of data at a glance and you don’t destroy your phone’s battery every time you track your rides. The Garmin Edge 520 and Wahoo Elemnt are two of the newest, most forward-thinking options available, so let’s see how they compare. 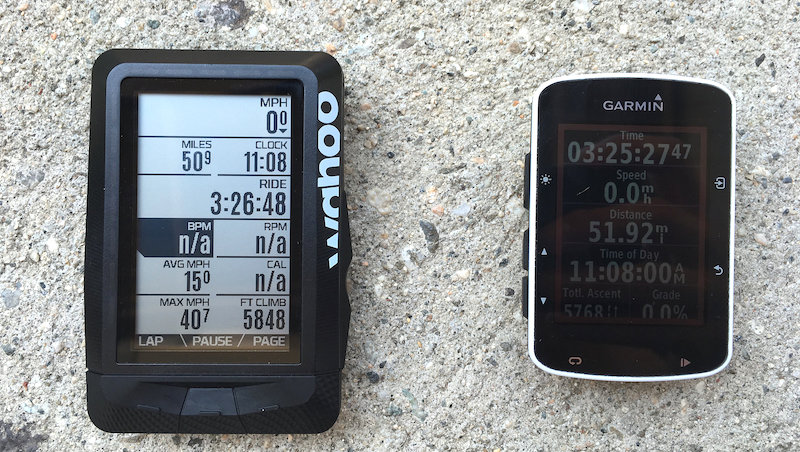 If you’re on a bike a lot, a separate GPS unit other than your phone is a necessity. These cycling computers are also waterproof and crash proof, which already puts them a step above mounting your phone to your handlebars. Beyond that, they also track more data than you phone can, and have a variety of workout and training routines to help you improve. The Edge 520 and Wahoo Elemnt aren’t your only options in this category, but they’re two of the most appealing, and they’re almost identical when it comes to features:

In my testing, both units held onto GPS signals pretty well, including times when I was well out of mobile phone coverage in the middle of nowhere. I also haven’t had any trouble with either unit staying connected to Bluetooth heart monitors or Ant+ sensors for heart rate, cadence, speed, and more. They both do what they’re supposed to do and I only noticed minor differences in the mileage and altitude data they collected.

Both the 520 and the Elemnt are solid little bike computers, but they do differ in a lot of ways. I’ve spent the last couple of months with both of them, and I’d be hard pressed to say that either is a bad choice. Still, they have different strengths and weaknesses worth considering before you pick one for yourself.

The Edge 520 Is Smaller and Sturdier with a Colour Screen, the Elemnt Is Bigger and Clunkier

As far as aesthetics go, better is always in the eye of the beholder, but the Edge 520 feels like a sturdier device. It has a hard plastic shell, tough rubber buttons (yes buttons, neither of these computers has a touch screen), and a screen that feels like it can take a beating. The Edge 520 has a 4.9cm x 7.3cm x 2.1cm case with a 3.5cm x 4.7cm colour screen. The colour screen isn’t useful often though, as the data screen you see when riding is black and white. The display is a bit difficult to see in the sun, so I ended up switching it over to night mode to make it easier to read.

On the 520 unit itself, you navigate the menus with a set of up/down directional buttons on the left side. The right side has what are essentially Enter and Return buttons, and the bottom has a Play and a Lap button for when you’re training.

The Elemnt is a bit bigger at 5.75cm x 9.05cm x 2.12cm for the whole computer and 6.86cm x 4.83cm for the screen. You navigate with contextual buttons that change depending on the screen you’re on, but the three on the bottom navigate you through menus while the two on the side are directional. The case itself is a bit clunkier to hold, and feels like it’s an Edge 520 wrapped inside an Otterbox case. None of this is to say the Elemnt ispoorly made. It simply doesn’t feel as durable as the Edge 520, which I’ve dropped more times than I can count.

The Elemnt has one other big difference in its main design: LEDs on the outer casing itself. These LEDs are customisable, so you can set them up to alert you about upcoming turns if you’re using the turn-by-turn directions, warn you when your heart rate is dropping, or alert you about upcoming Strava segments. It’s a neat little feature that helps you keep your eyes on the road, but considering the Elemnt has a pretty big display as it is, the added alerts don’t add that much to the experience overall.

In the end, the Edge 520 feels like something you could run over with a tank several times, which is exactly what you want from a GPS computer strapped onto a moving machine. The Elemnt feels more like a toy, though it still held up to plenty of drops in my tests. 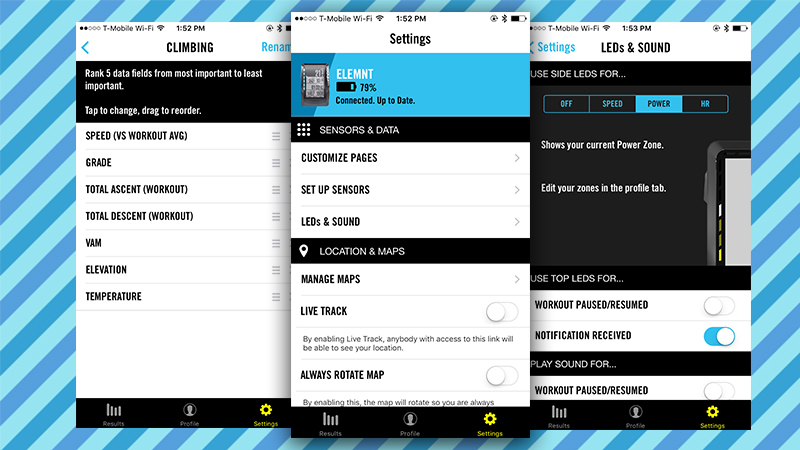 One long-standing problem with GPS units, especially the smaller cycling computers, is the horrible interface and general clunkiness that comes with setting one up. The Garmin 520 improves on its predecessors here, but the Elemnt blows it out of the water.

While it’s an improvement on older Garmins, the Edge 520 is still a disaster of interface design. Menu screens sit awkwardly inside of other menu screens, and it’s often hard to find the options you want. The Edge 520 does let you customise the home screen so you can pick which data shows up when you’re cycling, but you have to navigate through the labyrinth of bad design to set it up. For the first time in years I had to actually open up the manual on a tech product to figure out how to use it, which is a testament to exactly how badly the Garmin operating system works and how unintuitive it is. The good news is that once it’s set up, you’ll never need to mess with again. You can upload your cycling data to the web by connecting the Edge 520 to your computer via USB, or using Bluetooth and the Garmin Connect app onyour phone.

Conversely, the Elemnt is a joy to use. That’s because it doesn’t force you through archaic LCD menus, and instead you do everythingon your phone through the Wahoo Fitness app. This means with just a couple of taps you can rearrange the stats shown on the home screen, link the Elemnt with any sensors you have, customise how the LEDs work, upload routes from Strava or Ride With GPS for turn-by-turn navigation, and more. It’s incredible how much easier this makes the Elemnt to use. It took me just a few minutes to set it up exactly how I wanted it and I never had to open up a manual to do so. Even firmware updates on the Elemnt happen through the app, which means you barely need to pay attention to them. This is great, because there have been a ton of firmware updates adding a variety of features to the Elemnt.

Even loading up a pre-downloaded route to use for turn-by-turn navigation on the Elemnt is intuitive and easy to do. Conversely, loading up a route on the Edge 520 requires that you plug it into a computer and download routes first, and even then the process of loading it up before a ride is confusing. While neither computer has a live routing option where you just plug in a destination and get directions, the Elemnt is still the easier to use of the two.

The Verdict: The Edge 520 Has Garmin’s Pedigree, but the Elemnt Is More Forward Thinking

Aside from the sturdy case, the Edge 520’s biggest advantage is its namesake. Garmin is a well-established company who’s been making these things for a long time, so you know your $449 investment will also come with long term support. Garmin still updates the firmware for many of its older devices, so there’s no reason to think they wouldn’t do the same here.

The Elemnt, however, is so much easier to use that it’s hard not to recommend it. My one complaint is the size. Even though the Elemnt looks just a tad smaller than the Edge 520, it draws a lot more attention. Personally, I don’t want to pay that much attention to these things, so smaller is better for me, but your preference might be different.

Regardless, there’s no denying that the Elemnt feels like a device made in 2016 for modern humans, and that alone makes it an easier recommendation. The Edge 520 feels as clunky and awkward to use as that weird GPS unit still mounted in the dashboard of a 2002 Nissan. Add in the Elemnt’s regular firmware updates that come with added features, and it’s pretty clear that the Elemnt has its eye on the future where the Edge 520 is still kicking and screaming in the past. If you don’t mind sitting on the bleeding edge with a fresh company, the Elemnt is the way to go. If you don’t mind the archaic set up process and prefer buying from a company you know, go with the Garmin Edge 520.