Battle Ropes, And The Powerful Strength Workouts You Can Do With Them

Imagine yourself slamming, swinging around, pulling and moving a hefty, supersized rope, and then feeling like your arms, lungs and body are on fire, after less than a minute. Battle ropes are just as badarse as they sound, and they’re a novel and challenging twist to your regular fitness routine. Illustration by Sam Woolley. Image by AngryJulieMonday.

Badarsery and novelty aren’t the only reasons we’re talking about these ropes. Battle rope workouts uniquely challenge your stamina, strength and overall fitness, and burn a lot of kilojoules. Take a look at what I mean:

From the video clip, it looks like an exhausting arm workout (which it can be), but there are actually a lot of things going on here: I’m keeping my whole body, including my core, stable against the tug and pull of the rope in order to control the movements. I’m also making my whole body, including my wrists, forearms, ankles, hips and shoulders, move rhythmically with the waves I’m creating. It doesn’t look like a big deal, but it takes a ton of energy and coordination to keep the ropes moving for longer than 30 seconds, let alone keep up with a certain pace.

Believe me, battle ropes aren’t just for a flashy workout. They help you develop your grip strength and muscular endurance, and are a great form of cardio, too.

Where to Find Battle Ropes (or How to Make Your Own) 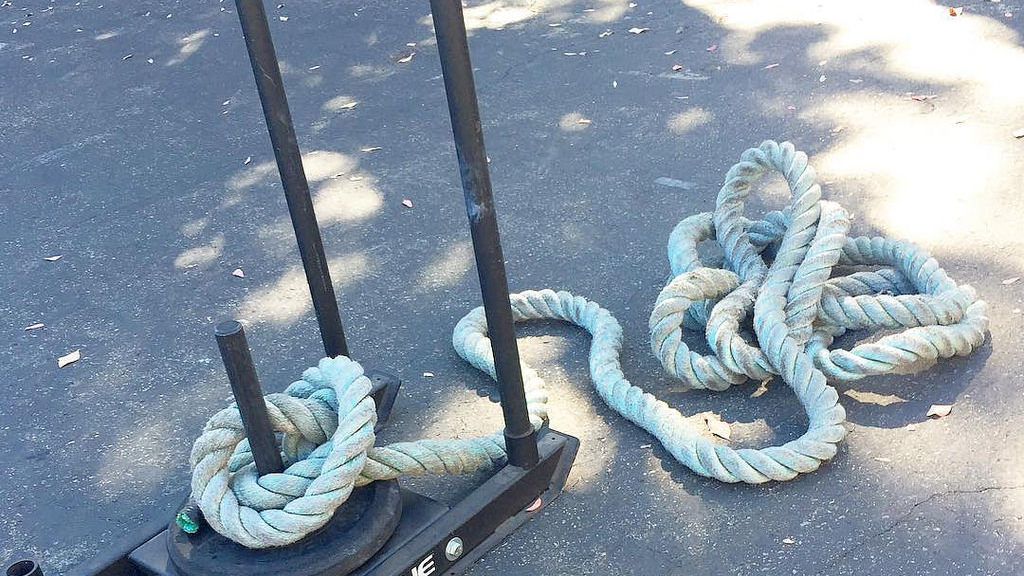 I first ran into to battle ropes many years ago at a smaller, boutique gym, but in recent years, I’ve seen them in commercial gyms with surprising regularity. I saw them sprawled out just the other day at my local 24 Hour Fitness. If your gym doesn’t have battle ropes already out in the open, try asking the gym staff. Sometimes they do have them, but keep them in storage because battle ropes can easily be mishandled and abused.

Most ropes typically measure between 12-15m long and are constructed from very sturdy polypropylene, manila or nylon material. Most of the ones you can buy are made from polypropylene or manila: Polypropylene-made rope is more versatile and can withstand a beating outdoors or indoors; manila threads will fray a lot more as you use them and so are better saved for outdoor use.

Battle ropes also vary in thickness, about 4cm to 6cm, and in weight. Not surprisingly, the heavier and thicker ropes give you a harder workout. If you’re new to battle ropes, a 15m, 5cm rope would be a good starting point: You’d get a crazy challenge from the get-go and still give yourself room to grow into them, even as you get stronger. You can buy workout-specific battle ropes online at stores like Onnit and Perform Better. They’re not cheap though, and they will set you back at least $US150 ($198), on average.

For a much cheaper alternative, you could make do with an old garden or fire hose (the latter of which is explained in Buff Dude’s video above); or buy some lighter-duty rope that’s 15m long and wrap the ends in duct tape to create handles. You could even just use a bed sheet, if you want to forego the rope but still want to mimic the workout.

The Awesome Exercises You Can Do With Battle Ropes

The above video by Onnit Academy will show you how to properly set up your battle ropes. Before you start whipping them around willy-nilly, make sure you have a lot of space. The rope itself needs to be fully unravelled from the anchor point, like a pole, a lamp post, a tree, a squat rack or some other very secure, heavy object, but you should still leave a little slack in the rope. To make sure it’s secured, loop the rope twice around the anchor point.

Once you’re ready to rock, all you need to do is learn a few primary movements. Of course, proper form comes first. The video above, by Warrior Sciences: Self Defence and Athletics, goes over “good” technique. With every battle rope exercise, you should always brace your core, leave a slight bend in your knees as if you were sitting back and keep a straight back and /”your shoulder blades down”. At the same time, keep your weight centred and stable, and fight the whip and pull of the rope as you work out. It’s all part of the challenge.

While holding the ends of the rope in each hand, stand shoulder width apart and keep your knees slightly bent. Raise both arms up simultaneously to around shoulder level and whip them down, as if you were fanning something to create waves with the rope.

Remember, this is not just an arm movement; you should bounce up and down to move in sync with the ropes, and keep the waves controlled and steady. The smaller the waves, the more force and speed you have to apply and the harder it is.

Similar to the double wave, stand shoulder width apart and grasp the handle in each hand. This time raise one arm up to start the wave on one side, but as you lower that arm, raise the other arm to do the same thing. Continue to rapidly alternate raising and lowering your arms. This takes a bit more coordination and extra effort to keep yourself steady and avoid swaying side to side. Think of pulling up on the rope as though you were trying to flip a pancake with a frying pan.

The power slam is the appropriate next step once you’ve gotten comfortable with the double wave.

Much of that oomph will come from syncing up your body’s movement with the ropes. That means when you raise both arms to shoulder level, your whole body should also rise up. Then use the downward momentum and all your might to forcefully slam that rope, and repeat. During this exercise, you can keep your feet planted on the ground or incorporate a slight jump squat of sorts for extra leverage, speed and power. You can try alternating power slams, too.

Snakes on the Floor

Stand with your feet shoulder width apart. This time you’ll hold a slight squat and keep both ropes to one side and low to the ground. Then sway them both side to side, creating what looks like slithering snakes, sliding side by side on the floor. If you prefer, you can also do alternating snakes on the floor, as long as they don’t get tangled up.

This is more straightforward: While still holding the ropes, do star jumps as you would normally. The ropes simply add extra weight and force you to maintain stability to keep from being tugged around by the ropes.

Of course, these are just the basics. Many more advanced battle rope exercises are simply modified versions of them. Once you feel confident in your coordination and skill level, you can add side shuffles, lunges, squats and jumps for a whole new challenge. Don’t worry if you don’t get a movement right away, or feel out of shape. Battle ropes have that effect on pretty much everyone. Stick with one exercise at a time. If you want to string a couple of the exercises together, here’s what that workout would look like:

Battle rope workouts typically last about 20 minutes. They’re short, sweaty and intense, much like high-intensity interval training (HIIT). In fact, you can treat battle ropes as you would a HIIT workout, which means that the workout itself is based on a timed work-to-rest ratio. For example, you can do double waves, power slams, star jumps or any battle ropes exercise each for 20-30 seconds and rest 30-40 seconds, for about four to five sets.

In general, these workouts are meant to supplement your normal fitness routine, whatever that looks like for you. Best of all, they’re lower impact than sprint intervals and still offer a fantastic way to get in shape without tying up too much of your time.