Last weekend, I helped out with a Guardians of the Galaxy-themed burlesque show. Having no background in theatre and even less in burlesque, I was only barely prepared for my job duties. Here's what I learned about working under pressure when you have no idea what the hell you're doing. Illustration by Angelica Alzona.

My girlfriend invited me to work on a show that was being put on by the local burlesque group Hysteria Machines. I would manage microphones and make sure everyone had the mic packs they needed when they needed them. I studied television production so I was sort of familiar with this, but once I arrived, I picked up a few other duties I was entirely unprepared for. Many jobs are like this. You show up to work on your first day expecting one thing and you find out you have five other responsibilities that you're not sure you're ready for. Fortunately, if you're prepared to learn on your feet, you can tackle a lot of problems even if you don't know all the specifics.

Do Your Homework, Don't Wait for Someone to Do It For You

When I first joined the show, the "position" I was filling didn't exactly exist. I received a very detailed spreadsheet that showed who was supposed to have which mic pack at what time. However, that document didn't specify when a mic pack change occurred. The spreadsheet was an excellent tool for the people running sound for the show, but since my job was managing mics on the actors themselves, I needed something a little different.

With a week before the first show, I got to work creating my own spreadsheet. I tracked down every mic change, who was getting a mic, who they were getting it from and how much time we had backstage to get it done. During the show, it was an invaluable tool. If I'd waited until show time to figure all this out, something would have gone terribly wrong, and it would have been my fault.

It's nice to think that your employer is going to give you a step-by-step walkthrough for everything you need to do. In real life, that's usually never the case. Sometimes your job is to figure out your job. You might have to build a project from nothing or turn a disorganised stream of chaos into an orderly process. Whatever it is, you have two choices: Complain, or get it done.

If you choose the latter, independent research becomes your best friend. In my case, I recognised that I had a problem, but also that I needed to solve it myself, a week before show time. No one told me I needed to do it, but I took the initiative. Don't wait for someone to tell you what specific things you need to do. Ask, or look for the problems you're most likely to run into, identify the tools you need to fix those problems and then either get those tools or make them.

Get the Job Done Now, Save Your Feelings For Later 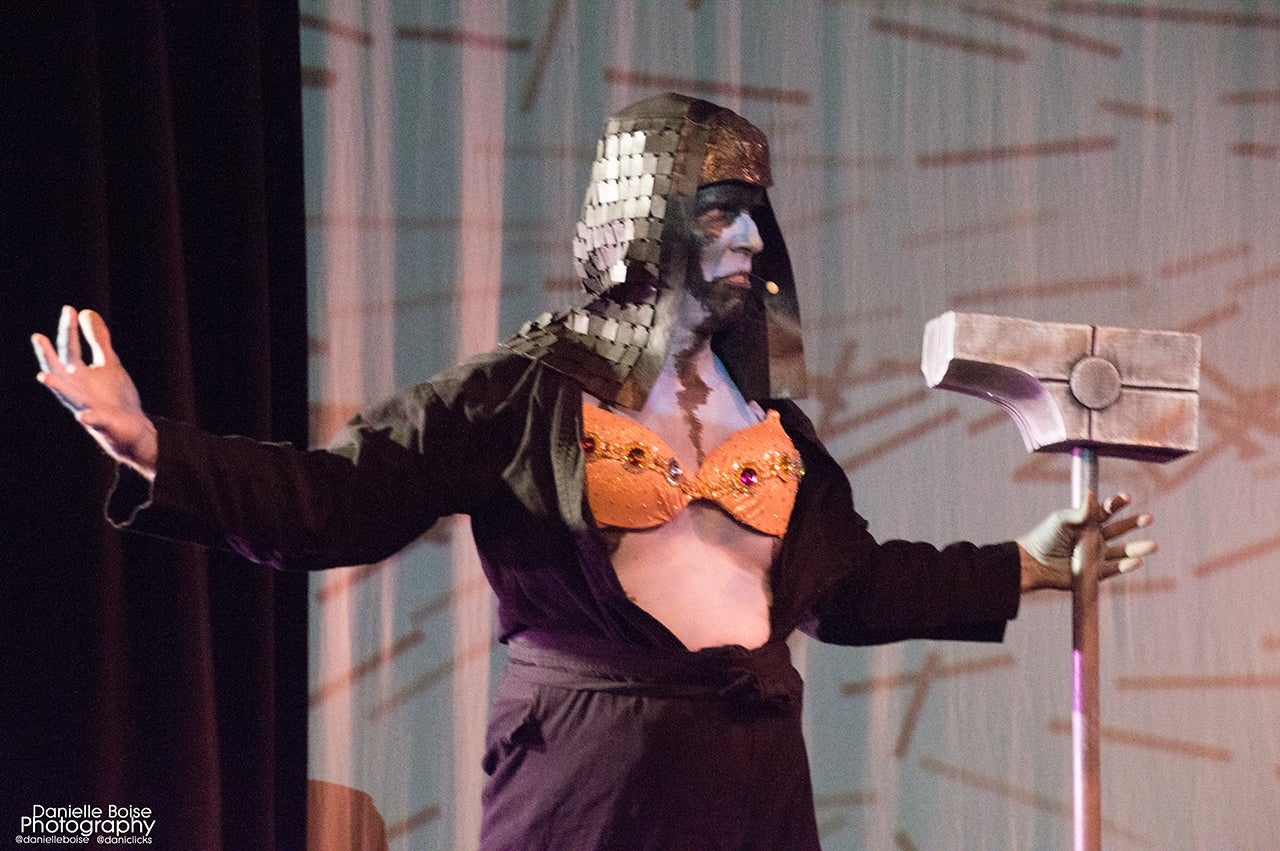 That microphone was my job. I wish I could take credit for anything else. Photo by Danielle Boise Photography, courtesy of Hysteria Machines.

Preparing early turned out to be a great decision. Once the show got started and I had the mic changes on lock, I found myself being an assistant stage manager, which is essentially a gopher for the stage manager. I had a call box backstage connected to the sound booth. When I heard a command yelled through that box, it became my job to carry it out.

There's an inherent simplicity to getting things done when you're working in theatre. It may be a high-stress environment, but everyone knows what's happening on stage matters more than anything else. If someone says to do something, you do it. If someone says to get out of the way, you get out of the way. So, when a voice on the callbox shouted, "Where's Deadpool?!" or "Why isn't Thanos' throne on its mark?" I didn't have time to get upset and argue that I'm just the mic guy, even if I wanted to. I relayed the message immediately, or I dealt with the problem.

Of course, no one likes to do things that are really someone else's job, or that they haven't prepared for, or even know how to do. It's easy to get angry, or irritated when someone barks at you for something you didn't know you had to do — or even how to do. Your first instinct when you're knocked off balance is probably to overreact. In the moment, that's not helpful. Instead, acknowledge those emotions and make a mental note to deal with them later, once the fire is out.

When you set aside your emotional reactions, usually you'll find one of two things is true: Either the reaction was just nerves and you're actually fine, or there's a legitimate offence problem underneath that needs to be dealt with. In my case, it was usually the former. Everyone on the show was professional and supportive, but loud noises through a squawk box are always jarring, and urgency usually doesn't leave room for delicacy. By waiting to indulge my reactions until later, I was able to sift out actual problems (which is a great strategy for emotional arguments in general) from heat-of-the-moment responses. This brings us to the next important step.

Ask for Help As Soon and As Clearly As Possible

We put on two shows, one on Friday and the next on Saturday. The first show was fantastic, but not without its rough edges. After a brief night's sleep, we got together on Saturday afternoon. I took this opportunity to bring up each issue I'd run into during the last show. I worked together with the producer, director and stage manager to make sure every issue we ran into was ironed out.

There was no whining or complaining — remember, my emotional reactions were dealt with earlier — and everyone involved got the tools they needed to make sure the show went smoother the second time around. I coordinated with stage hands to improve our communication when something wasn't in place. I talked with a couple actors to iron out technical issues. The result? The Saturday show went much more smoothly.

It's tempting to not bring up the problems you run into. If you have to ask for help, that means you can't hack it, right? I could've reasonably come to this conclusion, too: I've never worked in theatre, and some of the actors on stage had more experience backstage than I did. When you don't entirely know what you're doing, impostor syndrome and fear can creep in. Both of those make you do stupid things, like not ask for help when you need it.

But not asking for help when you need it is pretty unprofessional. If you don't know how to do something or if you're not getting the resources you need, you're only putting everyone at risk, whether you're on a team of office workers or working behind the curtains like I was. In any case, ask for what you need. I was lucky to work with a friendly crew that knew what they were doing. Not every team is like that, but if you ask for help, there's only a chance that someone will judge you poorly. If you don't ask for help and you screw up, they will know you can't do the job. It's better to get the resources you need than to indulge the fear that comes from being out of your element.

Get to Know Everyone 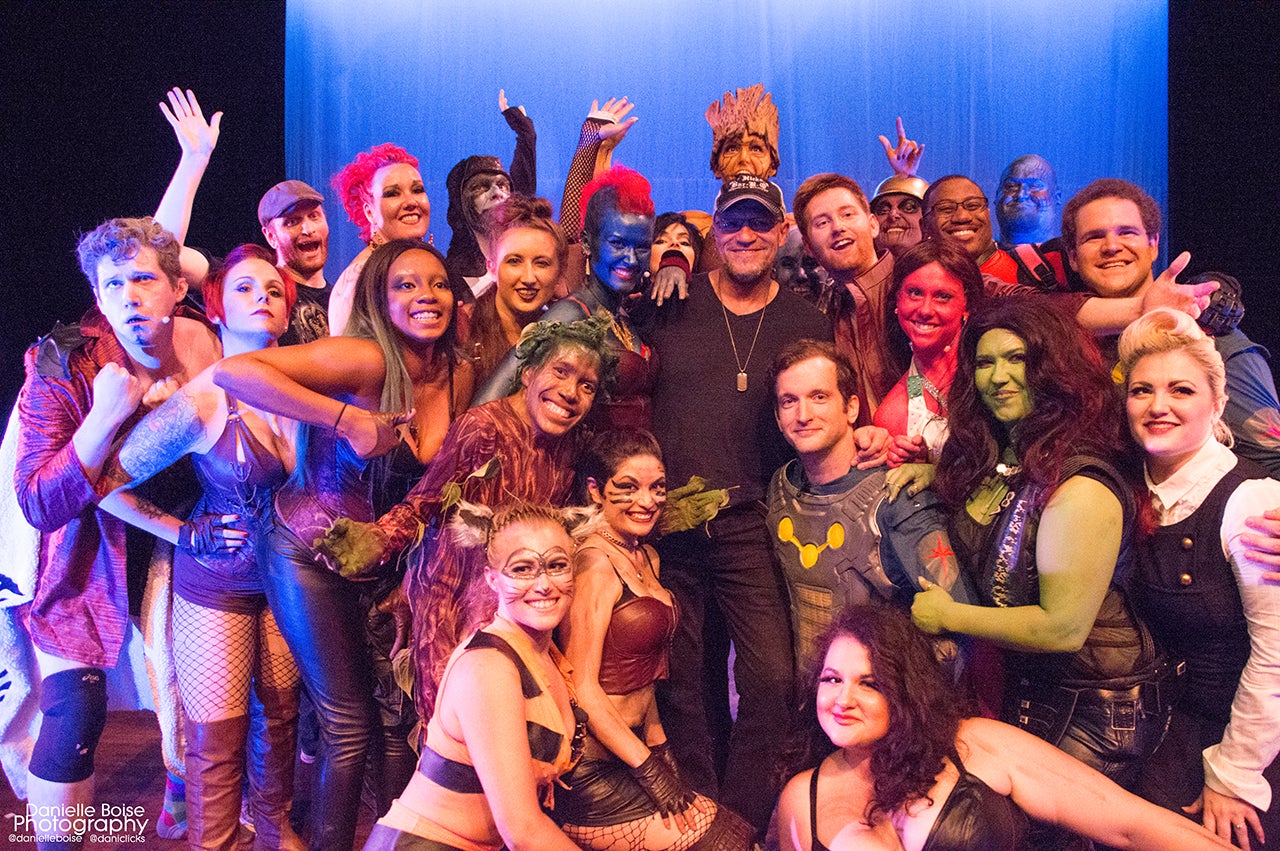 If I wanted to focus solely on my job in the show, I could've easily waited until the last dress rehearsal before the show. I could have gotten a quick rundown of what I needed to do, had the schedule emailed to me, and kept my nose out of anything that wasn't my business. Instead, I asked to go to every rehearsal I had the time to attend.

I didn't go because I expected everyone to drop everything to talk microphones with me. Instead, I just wanted to get to know the people and the show itself. I had time to learn names, have a few useful conversations and get comfortable with everyone in the room. On a personal level, it was nice to make new friends. On a professional level, it was immensely useful to know who was doing what job and who I could turn to for answers. When I needed to ask the stage manager a question or get help from a stage hand, I didn't have to ask who that person was, or explain to them why they needed to talk to me. We already knew each other.

At the very least, give yourself time to introduce yourself to everyone. Learn everyone's names and their jobs. Get contact info for the people that you need to talk to to do your job. If you can make friends, that's even better. The more the people around you want to work with you, the easier it is to get the job done. When you're thrown into the deep end of a job, every little bit of friction you can reduce helps.

More than anything, it helps to just be flexible. I got to have a one-of-a-kind experience on an amazing show that I was completely unprepared to work on — all because I didn't go into it expecting to half-arse it or just stay in my corner. Not every job is the same, but most can benefit from the same strategies. Who knows, you may even find out that everyone's winging this and you're not quite as lost as you thought.