Spend less than you earn, save your money, and — poof! — your financial problems are solved. If only it were this easy. Being broke sucks enough on its own, and then there are obstacles that make it extra hard for poor people to fight their way to financial security. For example, here are a few expenses that actually cost more for low-income individuals. Illustration by Sam Woolley

Toilet Paper and Other Staples

Even if you’ve never heard the phrase “the toilet paper effect”, you’re undoubtedly familiar with how it works.

In other words, as the study’s title points out, Frugality is Hard to Afford. We’ve discussed this phenomenon in detail, too. It’s not just toilet paper. When you’re poor, it’s not easy to buy stuff in bulk or buy high-quality items that will last. There are a lot of hidden, systematic ways poor people pay more for stuff, and there are some expenses that aren’t so subtle.

Car insurance premiums are tricky, and there are some surprising reasons why you might pay more for car insurance — you rent your home or you didn’t go to university, for example.

Recent research (PDF) from the Consumer Federation of America (CFA) found that lower income individuals pay more for their insurance, and it’s not because poor people are bad drivers. Specifically, the study found that good drivers pay $US681 ($913) more each year on average “due to personal characteristics associated with lower economic status”.

The CFA looked for quotes from five of the largest insurance carriers in the United States. They compared policies for two hypothetical men and two women who shared the same car model, address and driving record. They only changed socio-economic traits, and they found that insurers charged between 40 and 90 per cent more: 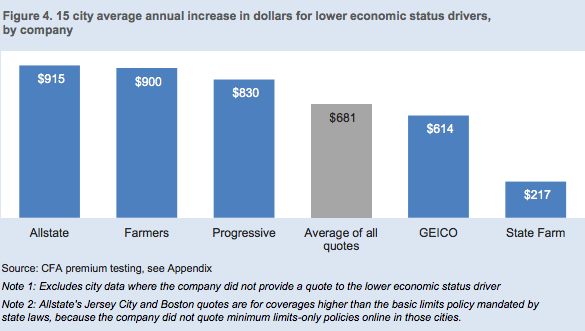 Sure, you could argue that car insurance premiums are more expensive for a reason, but the fact remains: They tend to be higher for low income individuals, even when those individuals are good drivers.

This expense might come as a surprise. The general assumption is that the poorer you are, the more grants and scholarships you qualify for.

That may be true, but many universities, especially private ones, use a method called “gapping” to squeeze more money out of poorer students — or discourage them from attending altogether. Basically, those universities offer prospective low income students tuition packages that don’t really meet their financial needs. They underfund those students and save the aid for wealthier students who can afford to pay full tuition rates. A recent report from the New American Foundation explained:

…colleges are increasingly using their own institutional aid dollars as a “recruiting tool,” rather than as a means of meeting a student’s financial need…In practice, this means that the highest-achieving students, who often come from affluent families, receive the most generous financial aid packages from their schools.

In basic terms, this practice makes it more expensive for poor people to go to university. They will get aid, but it’s not enough. Meanwhile, wealthier students get more aid than they actually need. Of course, poorer students then take out even bigger loans to make up for the difference and then graduate with larger debt loads.

Banking and Other Financial Services

Bank fees make it expensive just to maintain your money in an account, which is ridiculous. They’re easy enough to get around, though — if you have the money.

For example, the Commonwealth Bank’s Everyday transaction account comes with a $4 monthly Smart Access fee. It’s waived if you deposit at least $2000 every month, which is no easy feat if you’re poor, though it’s a decent option if you have a job that earns enough and also allows you to sign up for direct deposit. You can also get around it if you have a balance of $50,000 or more in eligible contributing accounts.

The point is: There are solutions, but in practice, those solutions don’t seem to work well when you’re flat-out poor. Studies show that there are fewer financial service options for lower income individuals, so they rely on costly alternatives: Payday loans and other debt traps.

For example, a study from the US National Poverty Center found that 17 per cent of the unbanked say their application to open a bank account was denied. Many others find their existing bank accounts closed because the minimum balance was too low. Whatever the reason, not having access to these accounts makes it even harder to save, work toward financial security or build a nest egg. The reasonable mainstream services that are available to most of us just aren’t as accessible for low-income households, which means they pay a lot more for alternatives.

It’s easy to judge other people’s choices and simplify their solutions — just don’t fall into a debt trap, right? You’d be stupid to take out a payday loan. The problem is, there are limited alternatives for a lot of people. If you’re struggling financially, this isn’t to say there’s nothing you can do about your situation, but it does take overcoming some extra obstacles most people overlook. When you know what those obstacles are in the first place, you’re at least in a better position to find solutions.