The PocketC.H.I.P. Is The Handheld Linux Machine I've Been Looking For 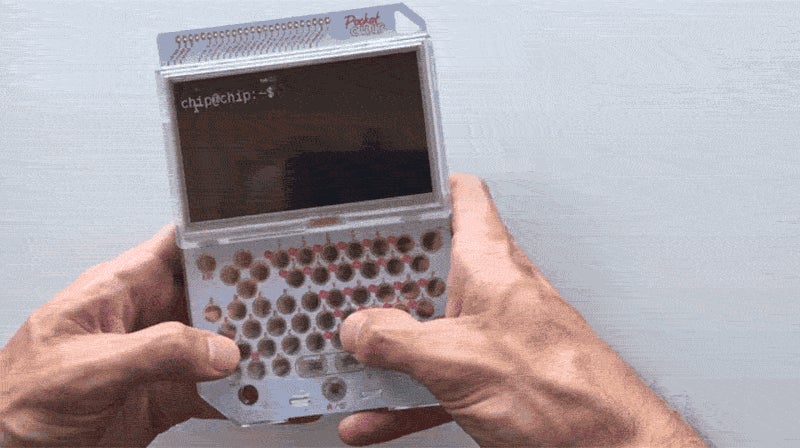 The variety of ways people have found to cram the palm-sized Raspberry Pi computer inside a handheld device are some of my favourite Pi projects. But those projects are usually expensive, and some even require a 3D printer. The PocketC.H.I.P. isn't nearly as powerful as a Pi, but it's still the handheld machine I've wanted for a long time. Plus, it's just $US50 ($67).

What Is a PocketC.H.I.P. and Why Is It Awesome? 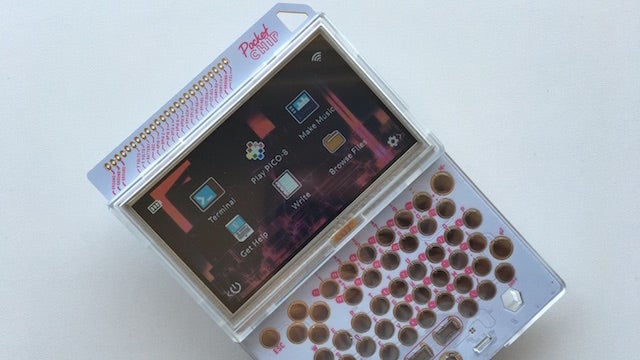 C.H.I.P. and PocketC.H.I.P. are both Kickstarter-funded DIY computers. If you're wondering, C.H.I.P. doesn't appear to actually stand for anything. The C.H.I.P is a $US9 ($12) Linux development board. The PocketC.H.I.P. currently costs $US49 ($65) (it will eventually bump up to $US69 [$92]) and basically operates as an integrated keyboard and screen for the C.H.I.P. When you buy a PocketC.H.I.P. you'll get a C.H.I.P. already installed, and you can swap it out with another C.H.I.P. easily.

As far as power and features, the C.H.I.P. is similar to something like the Raspberry Pi Zero, but has plenty of tricks of its own. Here are its specs:

The C.H.I.P. differs from the more popular Raspberry Pi in a number of ways. First off, there's no native HDMI. You'll need to shell out $US15 ($20) for an HDMI adaptor if you want HD video out. However, the C.H.I.P. has Wi-Fi and Bluetooth on-board. Storage is on-board too, which means that, for better or worse, you don't use SD cards to store your operating system on the C.H.I.P. like you do with a Raspberry Pi. This is good for beginners because the C.H.I.P. comes with a Debian-based version of Linux preinstalled. As for installing other operating systems, you use a web-based tool to "flash" operating systems onto the C.H.I.P. over USB. While the tool does support installing pretty much anything Linux, you'll still need to do the legwork and make sure it can work with the C.H.I.P.'s processor.

While the C.H.I.P. is interesting in its own nerdy way because its price compares well with similar Linux-capable boards, for me, the whole PocketC.H.I.P. package is the main draw.

Aside from the surprisingly pleasant little clicky-keyboard, you get a 4.3" low resolution, 480x272 touchscreen and a battery that should last around five hours. The display isn't mind-blowing, but for the price, it does what it needs to and looks fine. I was more surprised by the quality of the keyboard case. The case is a sturdy plastic, and the keyboard has a satisfying metallic click that reminds me of the Game and Watch Crystal Screen series. Having used a variety of handheld keyboards over the years, I wasn't expecting much from the PocketC.H.I.P., but it's nice to use. Once I got the hang of it I was banging out Terminal commands nearly as quickly as I would be on a full-size keyboard. Here's a closer look at it: 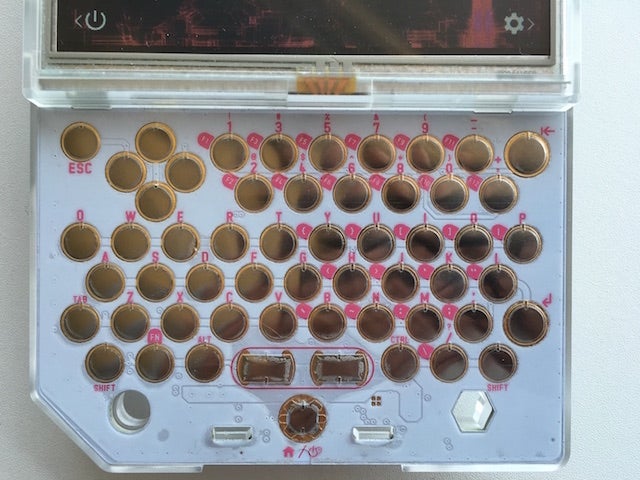 The keyboard case also breaks apart easily. This way you can swap out different C.H.I.P.s, access the GPIO or even replace the battery if you want. The case feels sturdy enough, but I still wouldn't take it apart too often for fear that the plastic pieces would crack.

Setup and Getting Started Is Ridiculously Easy 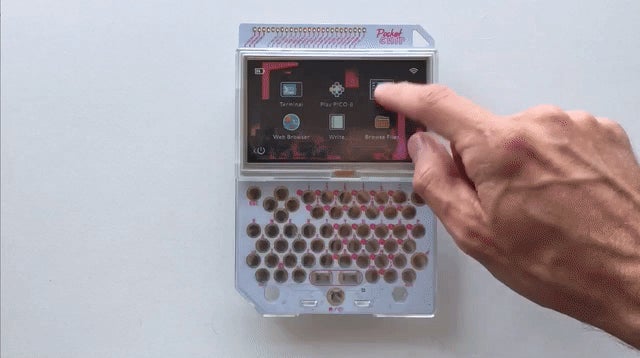 As far as Linux-based computers go, the PocketC.H.I.P. might just be the easiest setup process I've ever seen. The operating system is already installed, so all you have to do is turn the thing on:

That's it. Seriously. You're ready to go. There's no need to jump into the Terminal, no complicated operating system downloads or out-of-box patches and no old fashioned menus to navigate to set up basic tools. The sucker just works out of the box. Which is a kind of crazy thing to say considering it's based on Linux.

The PocketC.H.I.P. Comes with the Software You Need to Play Games, Make Music, and Code from the Command Line 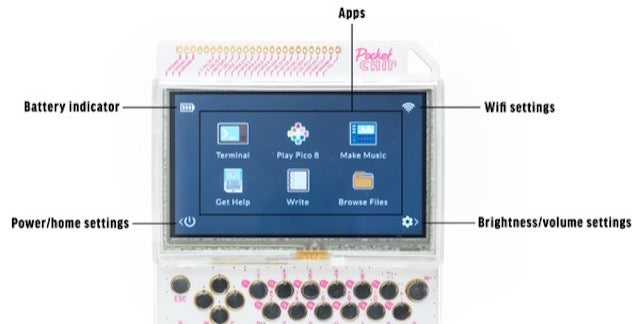 Easy to use, but you still get access to power features like the Terminal and all the GPIO at the top.

While you can always install new software on the PocketC.H.I.P., it's worth talking a little bit about the tools it ships with since this is where most of us will spend our time:

That's pretty much it for included software, though you can install any compatible Linux software you want using the command line.

The Pros and Cons of the C.H.I.P. Platform 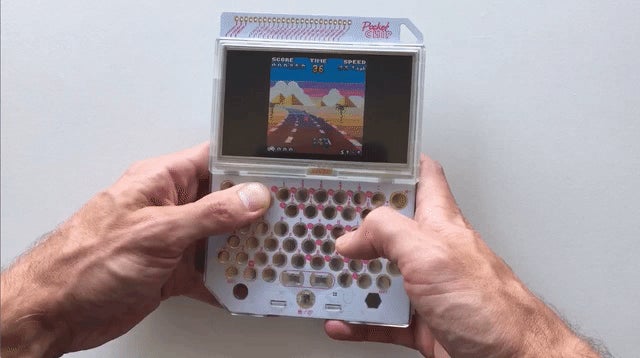 For the sake of simplicity, it's easy to compare the C.H.I.P. to the Raspberry Pi, but the two work differently. Sure, they're both Linux-based boards meant for hobbyists to start tinkering with electronics, but the similarities end there.

The C.H.I.P. ecosystem is pretty small, but as more units get out to the public, that community will get much bigger A hobbyist computer is only as good as the community behind it, but the good news is that the community behind the C.H.I.P. is growing fast. Take a look at the project page and the forums to get a good idea of what people are making with the C.H.I.P. The more people that get their hands on this thing, the people will make tools to customise it, so give it some time.

All that said, if you buy one and find the vanilla version as limiting as I did when I first got it, there are already ways to customise it. Here are a few guides I found useful:

The PocketC.H.I.P. has a ways to go before it's great, but it's off to a good start. Personally, I find the lack of a multi-page home screen maddening, and the fact you can't easily customise which software appears on the home screen is a major bummer. Even just installing a browser and putting it on the home screen is a chore, which takes a bit of the fun out of the touchscreen in general. Thankfully, the keyboard's capable, so it's not a big deal to launch software from the Terminal, but it'd be nice if this was just included in the Settings in the future.

The PocketC.H.I.P. is far from perfect, but I'd be hard pressed to label any hobbyist computer even close to perfect. Regardless, this is the first handheld Linux machine I've felt was actually capable of doing what I want it to, and it's also affordable without requiring a series of DIY hacks or 3D printed parts to make it work. If you've longed to have the command line in your pocket, the PocketC.H.I.P. is an excellent start and I'm excited to see what the community comes up with for it as time goes on.

Claire Lower 28 May 2020 4:20 PM
Burgers have gotten out of hand. Not only are bistro pubs and hip bars topping them with everything from avocado to pork belly (both of which detract and distract), but the patties themselves are just too darn thick. A burger is not a steak; a burger is a sandwich, and a sandwich is about balance between all the fillings.