Should You Measure Your Running In Minutes Or Kilometres? 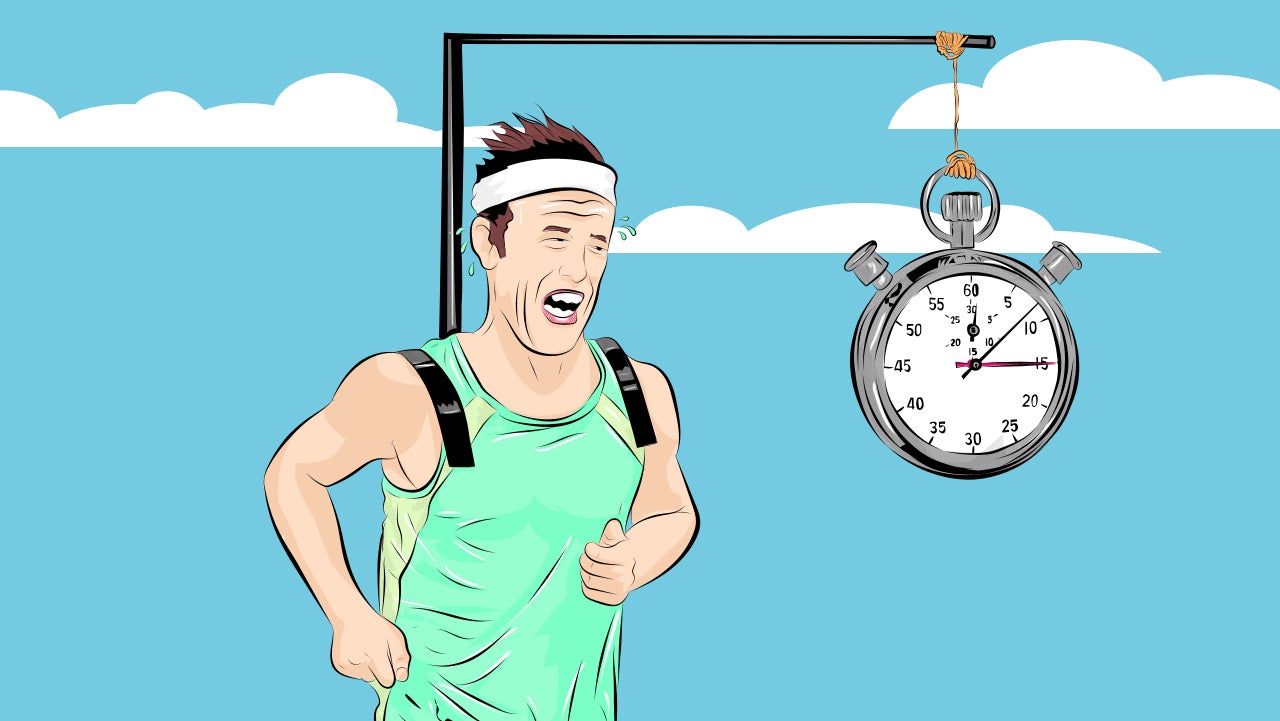 Should you head out the door for a 30-minute run or a 5K? If you train for a marathon, are you working up to racing for 42km or for a certain number of hours? You can plan your workouts by time or distance, but each has its advantages. Here's how to decide. Illustration by Sam Woolley

The Case for Kilometres

Distance measurements are standard for serious runners, though by no means universal. Here are some of the points in favour of kilometres.

Other Runners Speak in Kilometres

Thinking in terms of distance helps you communicate with other runners, since most — but certainly not all — think in terms of the distance per run, or their distance per week, or how many kilometres they have put on their shoes.

Distance per week is a key number when you're reading about what other runners do. Pros may push their weekly kilometres past 160, while your average mortal might hover around 15 or 30 with an occasional push to the 50's if they decide to train for a marathon. Weekly distance has become a shorthand for gauging how serious a runner you are, your fitness level and the amount of time you're able to dedicate to training.

For example, a training plan might say that it's suitable for someone who's been consistently running 30km a week. If you track your distance, you can take a quick look at your calendar to see if you qualify. You can also track your consistency and your progress through weekly distance. For example, if you were running 30km a week before you sprained your ankle, you can count up your weekly kilometres for a reality check on your recovery: If you're barely making 15 a week, you haven't really gotten back to where you need to be.

And about that training plan: Most likely, it will dictate your runs in terms of distance. That's not always true, and you can find minutes-based plans if you want — but in much of the running world, distance is the norm.

Can't you just track your weekly minutes (or hours)? Yes, but there's a difference. If you're walking and doing slow jogging on that tender ankle, you might still be out there for an hour but not cover nearly as much distance as a pre-injury hour.

Running doesn't just tax our muscles and lungs: We also slam our feet into the ground thousands of times per hour, which puts strain on our tendons, ligaments and bones. These tend to adapt more slowly than muscle. That means a jump from 10 to 30km a week is a serious increase in the stress you put on those tissues, even if your legs and lungs were able to handle it just fine.

Tracking weekly distance helps to prevent injury, although there's some disagreement about whether you should keep weekly increases to 10 per cent or less (the classic rule) or follow a more flexible system.

Your shoes suffer similar stresses: Most manufacturers recommend retiring shoes from running duty after 500-800km. If you know your distance (or if you track it with an app that lets you indicate which shoes you wore on which run), it's easy to know when shoes are due for replacement.

If you're training for a race at a known distance, you'll want to know what that distance feels like. When I run a 5K, I have a very good sense at the halfway point of how much road, and how much effort, lies between here and the finish 2.5km away. Likewise, when I was training for a marathon, I set my GPS watch to beep every time I completed a kilometre. Learning how long a kilometre felt — at a variety of paces from "Whee I'm flying!" to "Ugh, I'm going to die" — helped me interpret the distance markers, and properly pace myself, on race day.

As you settle on your favourite running routes, you'll find that, due to physics, they are the same distance every day. If your training plan says you need 8km today, and you know a loop in the park that covers 8km, you can forget your watch or your tracking app and just cover those kilometres. When you're done, you're done.

One last benefit to running a set distance: If it's a day for a medium-to-fast run, committing to a distance but not a time means that the faster you run, the sooner you get the workout over with. For runners that hate running — which, paradoxically, is most of us — that's a wonderful opportunity.

The Case for Minutes

When I surveyed my runner friends on whether they used time or distance to measure their runs, everybody who favoured time chose it for mental health reasons: Basically, giving their brain a break from obsessing over their pace. It has a few other advantages too.

Minutes Save Your Sanity

On the flip side, measuring runs by time helps you to keep your pace slow on the days that you've planned an easy run. You can certainly tell yourself that you're going to run 5km easy, and that really means easy this time — but not all of us have the discipline to run as slow as we should.

When you run by minutes (especially on a route whose distance you aren't sure of), you just head out until your stopwatch says it's time to turn around, and come back. If you're a beginner or if you're returning from a break (that sprained ankle?) you don't have to look at your pace every time and feel sorry for yourself: You can just log on your calendar that you ran 45 minutes as planned, mission accomplished.

Time-based runs also work well for unpredictable terrain, like if you're hitting the trails (which will always be slower than the same distance on the roads) or if your urban route features traffic lights and train crossings that would mess with your otherwise ideal pace.

Minutes Are Better at Measuring Effort

Consider, for a moment, Olympic marathoner Shalane Flanagan, who ran that impressive distance in two hours and 25 minutes in London. That's 42km of pounding on her shoes, but if her lungs and legs could talk, they'd describe it as "two and a half hours at top speed". If it takes me twice as long to run the same distance, I'm arguably doing twice as much work. My body would have to spend twice as long dissipating heat and finding ways to get fuel to my muscles. This is, in part, why the slowest runners in a long-distance race are often more likely to end up with heat illness or other medical issues: They may not be running faster, but they're running more.

Think about that when you're looking at a training program that plans runs in kilometres: If a slow and a fast person each run 10km at the same effort level, that's a bigger workout for the slow runner. If both of you are ramping up to the same goal race, that mileage may be necessary — but it's important to acknowledge the difference.

In fact, if you're gearing up for a long distance like a marathon or triathlon, it's often better to focus on the time you need to work up to, rather than the distance. To do this, you'll need to learn to gauge your likely pace (there are calculators that can help) and then make sure you've worked the right length run into your training: For a four-hour triathlon, for example, it's more important to know that you can work hard for four hours than to count kilometres.

On the other end of the spectrum, people starting a running program have a similar problem: They just need to get moving for 20 minutes, say, rather than worrying about how many kilometres they're covering. That's why so many beginner programs are written in terms of minutes. Just don't be surprised when you decide to move on to a more advanced program and have to recalibrate yourself to kilometres.

With advantages to each, it might seem tempting to use minutes for some runs and kilometres for others, but there are a few caveats. Remember about tracking weekly distance? You can't do that if you don't know your total kilometres for the week. I deal with this by figuring out my distance after a time-based run (not before or during, because that way lies craziness) and adding it up on my calendar or tracking app.

If you run with an app that tracks both speed and distance — which they pretty much all do — it's hard to escape getting both numbers. Consider turning off any mid-run alerts that tell you how fast you're going, and promise yourself not to take the phone out of your pocket for a peek.

Once you get a sense of your pace on a given route or terrain, time and distance become linked: If your tempo pace is 7 minutes per kilometre, then a 21-minute tempo run and a 3km tempo run are the same thing. Likewise, if you're running a new trail without a tracking app, but want to keep track of kilometres in your training log, you can multiply your time by the approximate pace you usually get on that sort of trail.

The bottom line: Since both time and distance have their advantages, you'll have to choose based on the type of run, your training goals and what kind of mindset helps you train your best.