The Samsung Galaxy TabPro S is one of the slimmest and lightest 2-in-1s on the market. While this is great for portability, it can prove problematic for forgetful mobile workers who have a hard time keeping track of their things. (You know who you are.) Because you can barely feel the TabPro S in your bag, it’s easy to accidentally leave the device behind on public transport.

To protect against these user errors, Samsung has equipped the TabPro S with Samsung Flow; a mobile app for Galaxy smartphones that provides additional security features and other neat tricks. We put it to the test during our road trip.

I’m pretty terrible at looking after stuff. On more than one occasion, I’ve disembarked from a train or taxi without taking all of my gadgets with me. Once I even did it on an aeroplane. (I blame the fact that I’m always in a rush.) Work laptops are a potential treasure trove for identity thieves — so you need to embrace any extra security measures with open arms.

Samsung Flow provides a secure PC login by using the fingerprint sensor on compatible Samsung Galaxy smartphones. You can also use it to sync notifications between your Galaxy smartphone and TabPro S and enable a mobile hot spot with a single click (for those that have the Wi-Fi version of the tablet.)

To use the Flow app, you’ll need a Samsung phone with a touch-type fingerprint sensor and Bluetooth 4.1 running Android 6.0 or higher. (This includes the Galaxy S7, S7 Edge, S6, S6.) Once connected, you can log onto your TabPro S securely by tapping your unlocked Galaxy smartphone and scanning your fingerprint. This makes it much more difficult for thieves to access your laptop data in the event of loss or theft.

The set-up process is a bit complicated, but Samsung does a good job of guiding you along the way – for instance, tapping your phone against the TabPro S automatically fires up the Flow download on Google Play. Once the app is installed on your NFC-enabled phone, you simply pair the devices via Bluetooth and follow the prompts. (Note: you need to register your fingerprint on the phone and Windows Hello to make this feature work.) 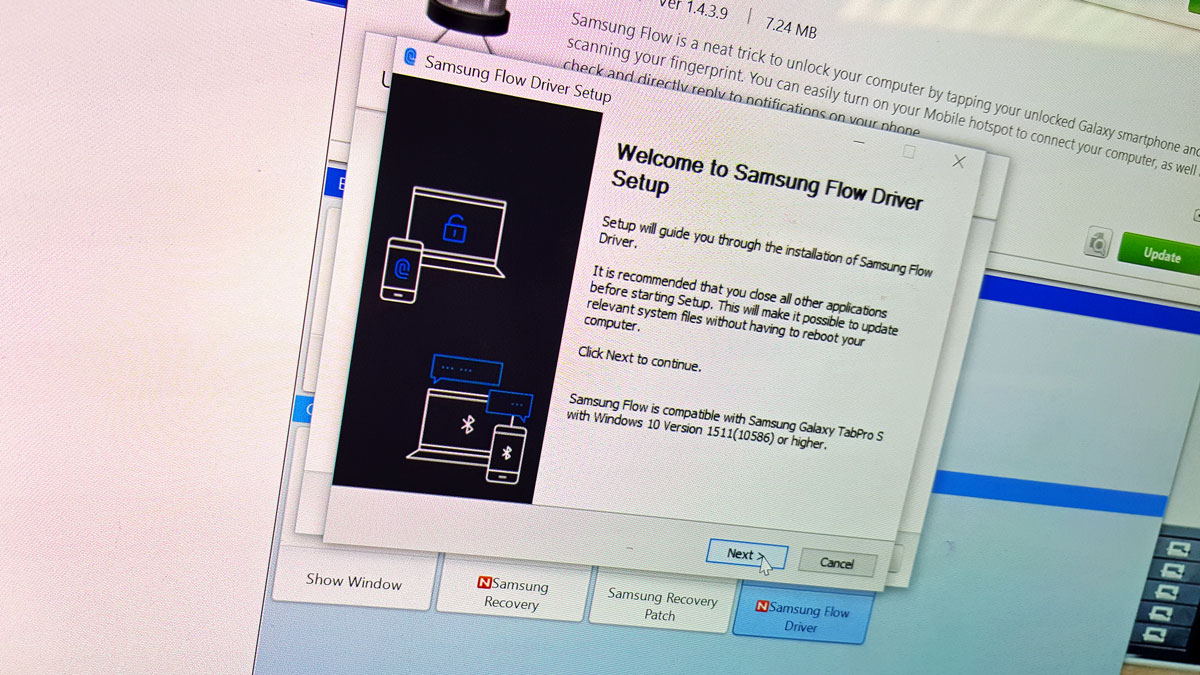 Once the application has been set up, tapping the backside of your phone on the TabProS’s keyboard will bring up a fingerprint scanning request. Assuming they haven’t hacked your finger off, it will now be much, much harder for thieves to access your laptop’s data. It’s like two-factor authentication but without the frustration.

If you’re not comfortable storing fingerprints on your phone for whatever reason, you can use Samsung Flow to set up a pattern unlock instead. This works exactly like the one on your phone, but with the pattern unlocking the TabPro S. You can use the same pattern as your handset or a completely different one for extra security.

In addition to beefing up your laptop’s security, Samsung Flow can also be used to integrate productivity across both devices; you can even see texts and phone calls on the laptop, much like with Apple’s Continuity feature or the various notification-dispensing wearables on the market. What’s interesting here is that the devices run on completely different operating systems.

Currently, Samsung Flow is only being used for a handful of dedicated tasks. However, the application has plenty of potential when it comes to making Windows and Android play nicely together. We’re keen to see what future updates bring. In the meantime, being able to use your smartphone as an authentication device is definitely useful for IT managers and security-conscious individuals who happen to own both devices.