The AM09 Hot+Cool is the latest swanky home appliance from Dyson. As its name implies, it’s a cooling fan and heater in one, which means you can use it all year round. It also boasts near-soundless operation, safe-to-touch heating elements, intelligent climate control and an impressively sleek design. But is it worth the astronomical $699 asking price? We put it to the test.

Dyson seems pretty proud of the AM09 Hot+Cool’s dual temperatures — it’s right there in the product’s title. It’s a bit odd when you consider how prevalent hot/cold heaters are. Indeed, even $20 no-name models usually contain a cool fan mode.

Thankfully, this isn’t the only trick up the Hot+Cool’s sleeve.

Like everything Dyson makes, the AM09 Hot+Cool is designed to stand out from the crowd. The futuristic blade-free build and absence of visible heating elements is unlike any personal heater on the market. It’s an everyday device re-imagined to look fresh and avant-garde.

The heating element is quite similar to Dyson’s range of hand driers that require you to insert your hands into a cylindrical opening. Which is to say: most of the heat is supplied via a stream of concentrated airflow.

Setting up the device couldn’t be easier. It’s a self-contained unit with easy-to-understand controls; simply plug it into a wall and plonk it down in the desired area. The supplied power cable runs to 1.8 metres, which is a pretty decent length.

There are a handful of physical buttons on the top of the device, with advanced functions such as a sleep timer selected via an included remote control. More on that in a moment.

In terms of operation, the Dyson AM09 Hot+Cool shares more in common with an air conditioner than a floor heater. It comes with a remote control and allows you to set precise temperatures right down to the desired degree. By contrast, most conventional heaters provide a handful of incremental heat settings that you adjust with a dial. 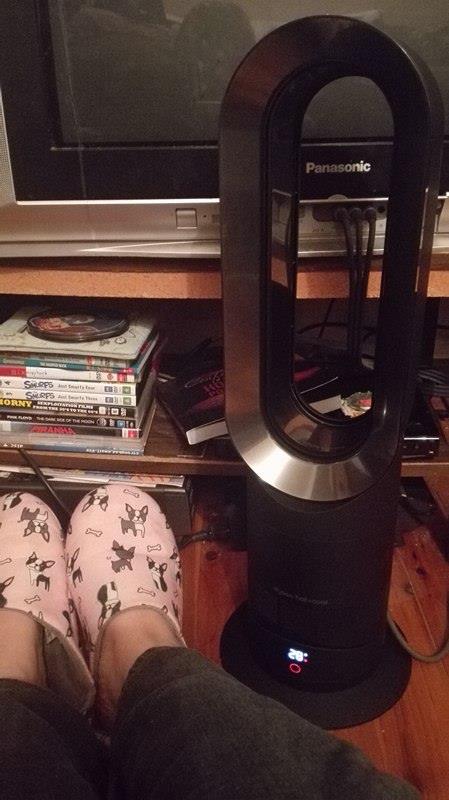 As mentioned, the AM09 Hot+Cool comes with all the features you’d expect from a high-end heating unit. On the other hand, it doesn’t pile on a bunch of bells and whistles to justify the price tag.

Noteworthy features include a revolving motor with oscillation control, a sleep timer with an automatic cut-out safety function, an inbuilt display that shows the temperature, and the so-called ‘Jet Focus’ technology that provides two airflow modes: Long-Range for focused heating and Diffused Mode for heating up an entire room.

In terms of what’s offered, we think Dyson struck the right balance with the Dyson AM09 Hot+Cool: it contains all the essential modes and features a good heater requires with no superfluous gimmicks you’re unlikely to use. That said, we think a slightly bigger remote would have been nice given the price tag. As it stands, older users may have a hard time deciphering what the tiny buttons do.

Because it’s winter we focused on testing the unit’s heating capabilities, which is the make-or-break function here. Like any air-based fan, the cool setting simply blows out air slightly below room temperature.

The Dyson does a pretty great job of providing heat in both Long-Range and Diffused modes. Naturally, its ability to warm up an environment largely depends on the size of the room and whether the space is sufficiently closed off. In other words, you’ll get best results in a bedroom.

We compared the Dyson’s heating chops to an el cheapo “Home Collection” fan heater with just three heat settings. From memory, it was purchased at K-Mart for about $20.

Interestingly, the Home Collection did a better job heating the room at maxed out settings than the Dyson. However, this is not nearly as advantageous as it sounds: the room quickly became uncomfortably suffocating and stuffy.

By contrast, the Hot+Cool’s temperature remained pleasant and evenly dispersed at the highest setting. It is also smart enough to keep the nominated temperature constant. If you forget to turn it off at bedtime, you’re not going to wake up parched and sweaty — unless you set it at 30+ degrees, of course.

In addition, the cheap model gave off an off-putting burning smell that is a common issue with fan heaters. The Dyson AM09 Hot+Cool Personal Heater maintains a temperature below dust’s burning point regardless of how high you crank it up. If you can’t stand the smell of burnt dust, this is a chief selling point.

The operation noise isn’t completely silent, but it’s pretty darn close — the sound is comparable to a modern laptop under medium load. In other words, it’s just loud enough to know it’s working.

Is the Dyson AM09 Hot+Cool worth $699? Is any fan heater worth that much? When you consider portable air conditioners start at around $400, the Hot+Cool’s asking price is a pretty big hurdle to cross. Anyone with this much money to burn probably has cutting-edge smart heating installed in every room of their house already.

With that said, we can’t fault the AM09 Hot+Cool when it comes to room heating. Anyone that requires a powerful, quiet and user-friendly fan that can be used in summer and winter will not be disappointed. It will heat most rooms rapidly and evenly with minimal noise and zero smell. Plus it looks incredibly cool, if you care about that sort of thing.