How Using An Ultrawide Monitor Boosted My Productivity

I moved a few weeks ago, so I had to break down and re-set up my workspace. When I did, I replaced my dual-display setup with a new 34″ ultrawide LG curved display. It’s had its quirks, but now I’m not sure I could ever go back. Here’s why, and why it’s worked so well for me.

The last time we discussed ultrawide monitors, the promise of one display on your desk that offered the benefits of two, or even three, was appealing. You get great horizontal real estate, clean up your cable mess and enough room to keep multiple windows and applications open. Ideally, it will help you be more productive.

While appeal of a single, wide display meshes with my working style (lots of windows and apps open next to each other, hiding behind each other, and never one thing completely full-screened,) if that’s not you or you keep one window maximised at all times, a monitor like this probably isn’t for you (but this particular display has a few tricks you might like that we’ll get to later.) If you’re more like me though, you’re in for a treat.

Going from Multi-Monitor to Ultrawide Was An Easy Transition

Physically, it was: I hefted my two displays off my desk, put one thinner, curved display in its place, connected it to power and plugged in a single DisplayPort cable. I turned it on and everything was great, aside from some stretched desktop wallpapers.

I’ve been using it exclusively with my Windows setup for work and gaming for a few weeks now and it’s a pretty impressive panel. Hardware Canucks put it to the test as well (video above) and loved it.

I was afraid that going from multiple displays on my desk to one might cramp my cross-platform style of using multiple computers, but the 34UC98 features dual HDMI ports, that single DisplayPort port and dual Thunderbolt ports on the rear (which makes it a great alternative to Apple’s now-discontinued Thunderbolt Display), so I could easily connect a second computer, like that Macbook Pro I mentioned earlier.

It also has dual USB 3.0 ports (perfect for charging mobile devices) and a headphone jack you can use for private listening. The panel also boasts built-in 7W speakers, which are surprisingly powerful for speakers you would find in a display, but let’s be fair — you probably won’t use them. They’re nice to have, but they won’t replace my headphones or my PC speakers.

I will say this, though — I do love the look of the panel and the more organised profile on my desk is something I also appreciate. Going from a mess of power, USB, and video cables to corral down to one power and one video is a nice benefit.

As for the actual transition though, I was actually surprised how easy it was to go back from multiple displays to a single one, but I think that the horizontal working space — 3440 x 1440 native — is to blame for that. Going back to work was easy enough, and the only real quirk or feature I miss is the ability to move between displays or snap to interior bezels, or look from my primary to my secondary when playing games to read a web page or keep an eye on email, or chat while I’m playing. That’s more of a single-monitor problem than an ultrawide problem, though. 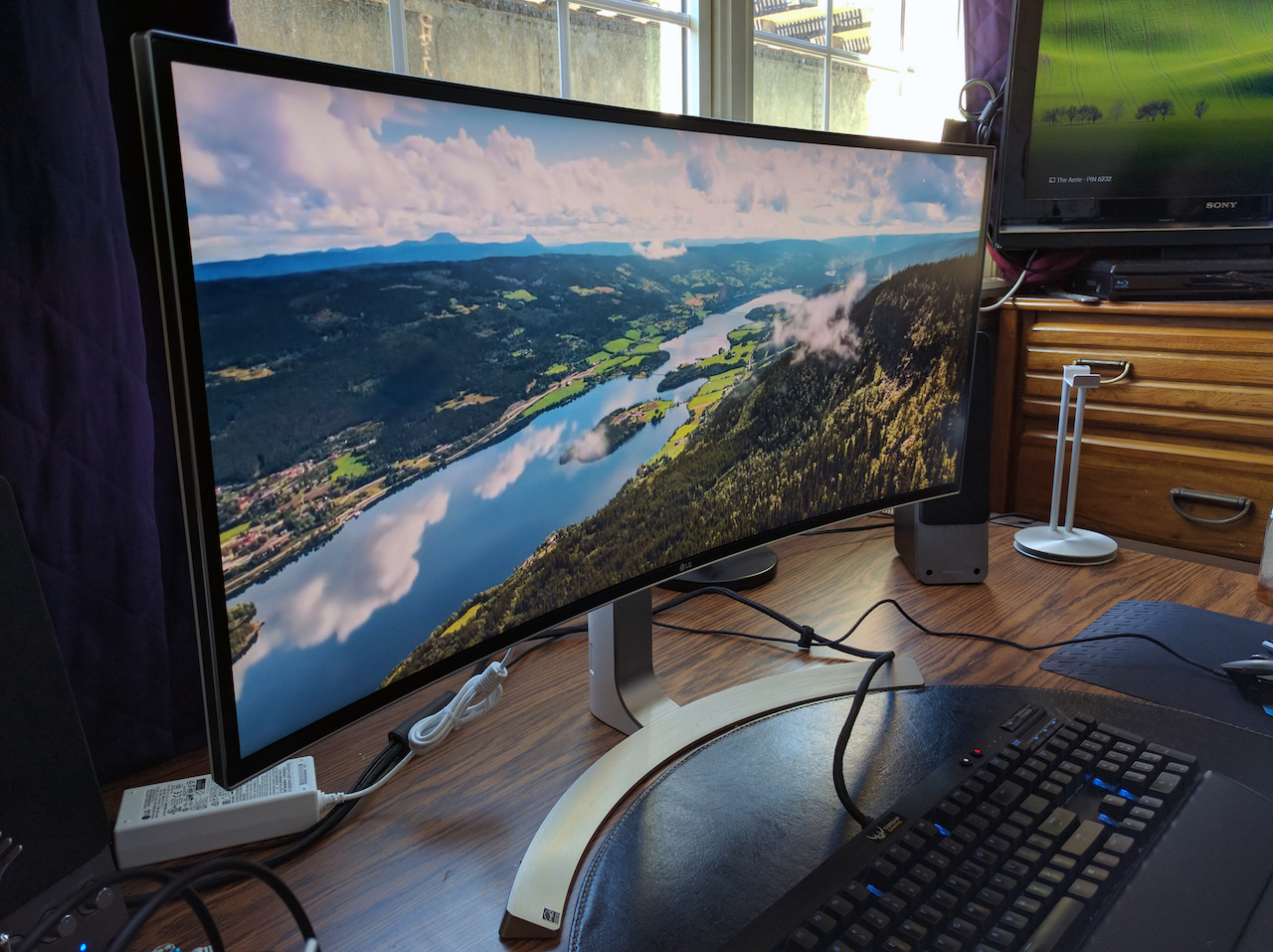 The cable management is a work in progress, but already much cleaner than the last iteration.

The cable management is a work in progress, but already much cleaner than the last iteration.

When it comes to work, the display itself is actually lovely to use, but that’s largely due to the way I work. I’ll keep research open in a window behind the one I’m writing in, a video or music player running over to the side where I can see it, a chat window open somewhere else, or maybe Twitter or Slack hiding in the background.

When you have the sheer amount of horizontal space a display like this gives you, you can keep many of them open next to one another and keep an eye on everything at once. It’s not hard to have Google Docs up in a window, a reference video in a smaller window just to its right, Tweetdeck docked to one side and Slack or an article open in a corner. When I have to navigate a massive spreadsheet, it’s beautiful to have that much horizontal space.

While I’m not really a “distraction-free, single window at all times” kind of user, displays like these aren’t ideal for those people, unless the app you work with can make use of all of that space. For example, if you’re a creative professional or an engineer, you could probably fill the same space with terminal windows and text editors, although more vertical space may really benefit you.

If you’re a video editor or photographer, you could easily fill all that horizontal space with a preview window, multiple editing tracks of video and audio, or Photoshop windows, actions and toolbars.

This is LG’s image, not mine, but this feature does indeed work well.

This is LG’s image, not mine, but this feature does indeed work well.

On the other hand, I’ve seen people lament that displays get wider and wider every year, while most web sites still shove all the useful stuff into a single column with whitespace on either side — which would look silly full-screened at 3440 x 1440. For those folks, this particular display comes with the ability to simulate two or even three smaller displays, in both vertical or horizontal layouts, so you can get that multi-monitor feel on a big, wide panel.

I tried it a few times, and while I fell back to managing the whole display myself, I could see how those configurations might ease the transition from two displays to a single large one, or give those “I’d rather have more vertical room for reading” folks something to love. It would be great if more ultrawide manufacturers included LG’s features in their displays.

At the end of the day though, whether an ultrawide like this will transform the way you work depends heavily on whether or not you can use the screen space. If it’s too much for you, or you’re a single-tasker and use tools where all that space on the sides would just be wasted, it may not be worth it.

For everyone else though, it’s worth considering — the added real estate has been a huge benefit to me, and helped me stop tabbing around and work that much faster.

Gaming and Movies Are Absolutely Gorgeous, but There Are Some Quirks 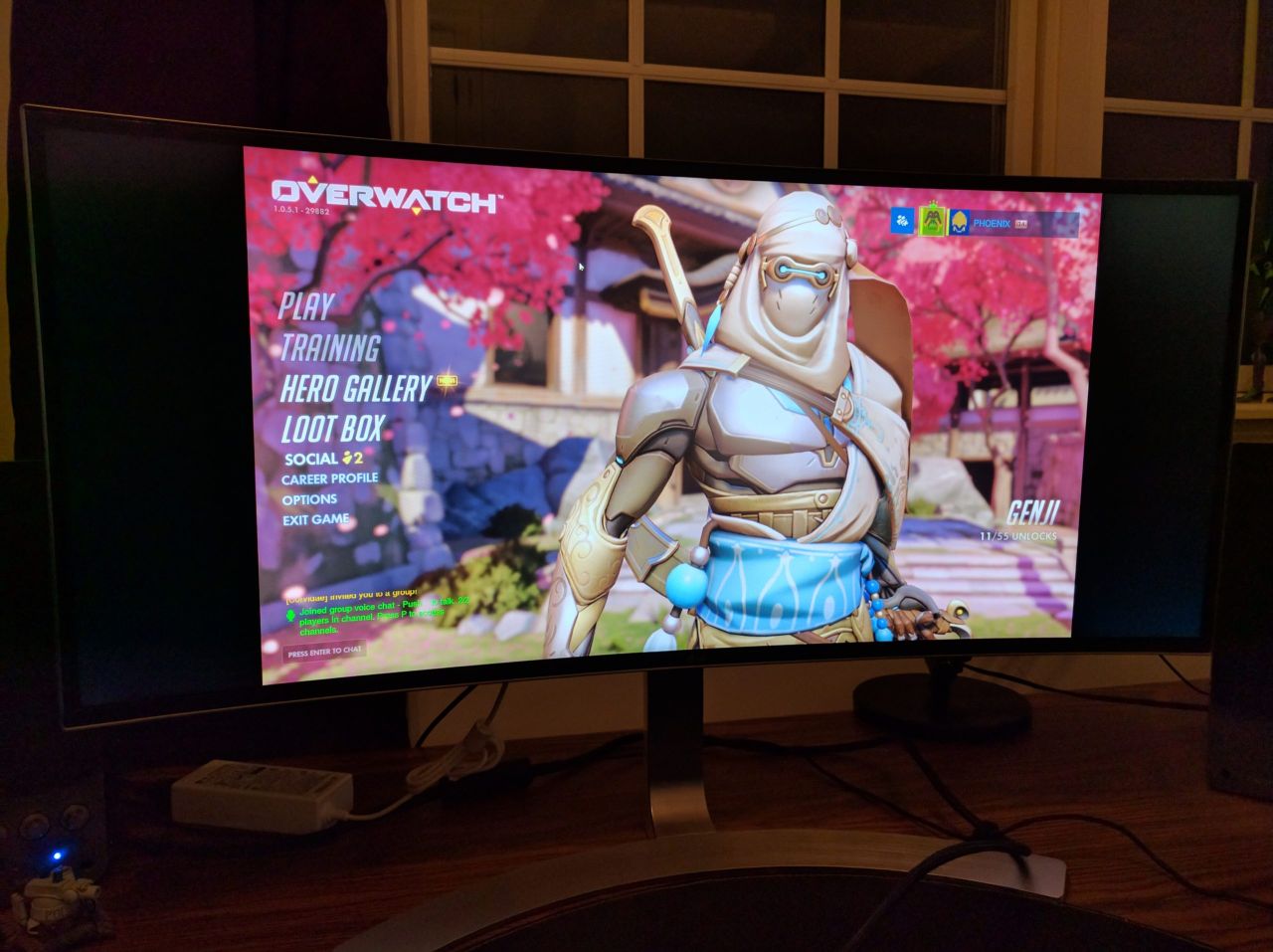 When you invest in an ultrawide display, there’s no getting around the fact that the majority of your games and video are probably 16:9 today and may not fully support a 21:9 monitor. That means that if you full-screen a YouTube video or downloaded movie, or fire up your favourite video game, you’ll be greeted by big black bars (called “pillarboxing”) on the sides of the screen, limiting you to the largest supported 16:9 resolution at 1440 pixels high.

Of course, there are definitely gorgeous games and videos out there that support 21:9 resolutions, and you’ll be thrilled when you find them. You also get used to the pillarboxing after a while, but it’s amazing when you don’t see it. If you love video games like I do, visit the Wide Screen Gaming Forum and check their master games list to see which of your favourites support 21:9 displays.

You can also see which allow you to customise their Field of View (FOV) settings to give you that wide, cinematic look while you play and of course, which games can be tweaked manually even if ultrawides aren’t officially supported. The community there is great and full of very smart people.

LG equipped this particular model with AMD FreeSync over DisplayPort, which promises to smooth out framerates and eliminate screen tearing in games by supporting dynamic framerates. If all of that is over your head, it’s designed to make your games — especially on large displays — run smoother and look better.

Of course, you need to have an AMD graphics card that supports this (I happen to have one) and you have to make sure your games are configured to meet FreeSync’s framerate requirements, but once they are, it’s a great experience, especially if your game can really make use of the whole panel. Don’t run out and buy a new GPU just for this, obviously, but it’s a nice perk.

I May Go Back to Multiple Displays… Just Not Right Now 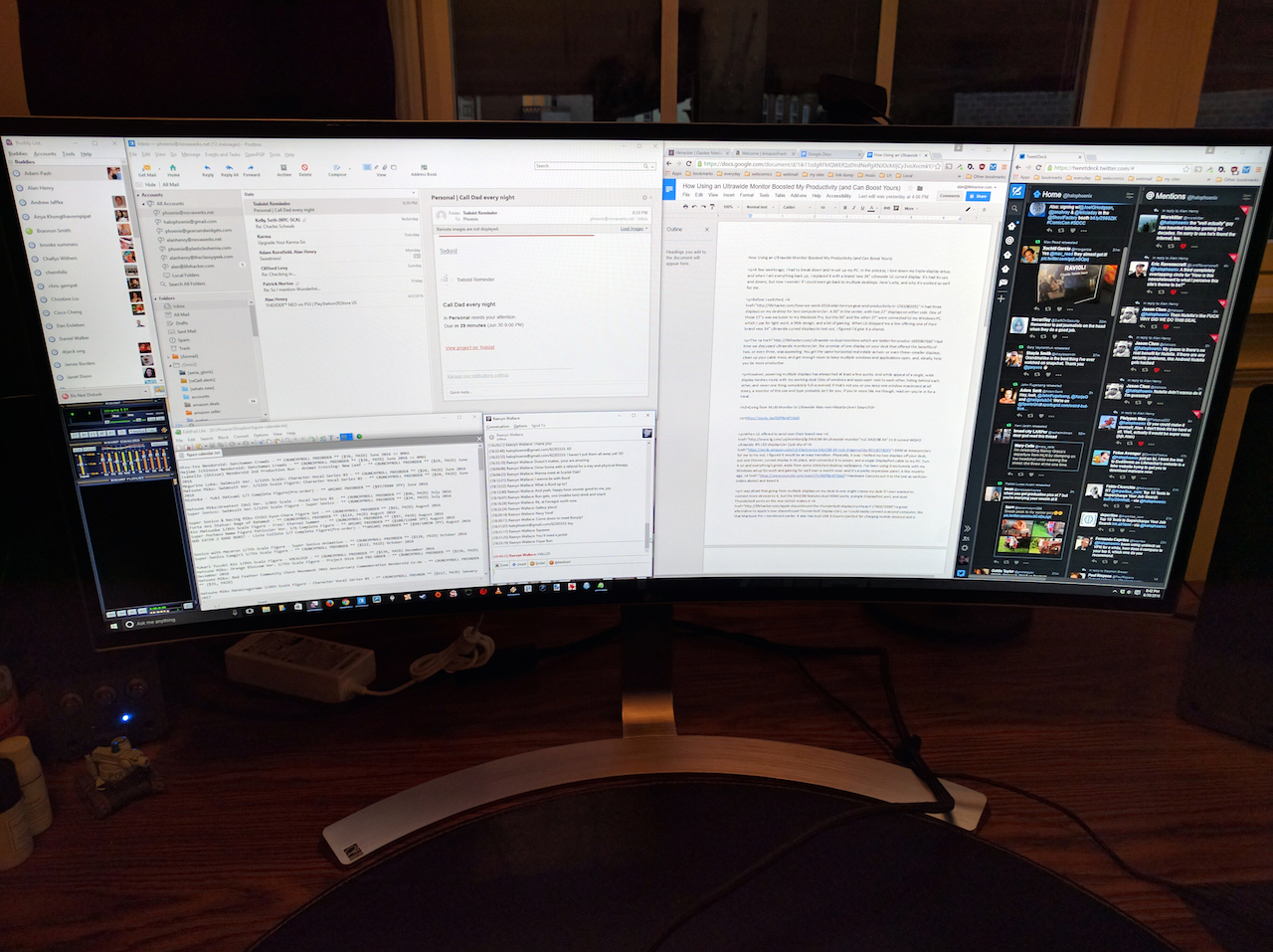 That’s me writing this article. And in between Winamp playlists.

That’s me writing this article. And in between Winamp playlists.

When my time with the LG I’ve been testing is over, I may go back to my old setup, but I’m seriously considering getting on the 21:9 bandwagon. I hesitate to outright say that it’s made me more productive since I don’t think hardware can really make you anything. However, it might let your own abilities shine when you find a good match for your work (and play) style. In my case, that’s certainly true.

From a work perspective, this experiment has been a resounding success, but your experience may differ depending on what you do. From a gaming and media perspective, it’s also been a success, largely because I can look past pillarboxing when I run into it, and when I don’t run into it, the experience — especially while gaming — has been incredible.

So yeah, I may go back to multiple discrete displays. Just…not right away. I’ll give it a little while longer. Just don’t ask me how long.