How To Deal With Frustrating Workplace Bureaucracy 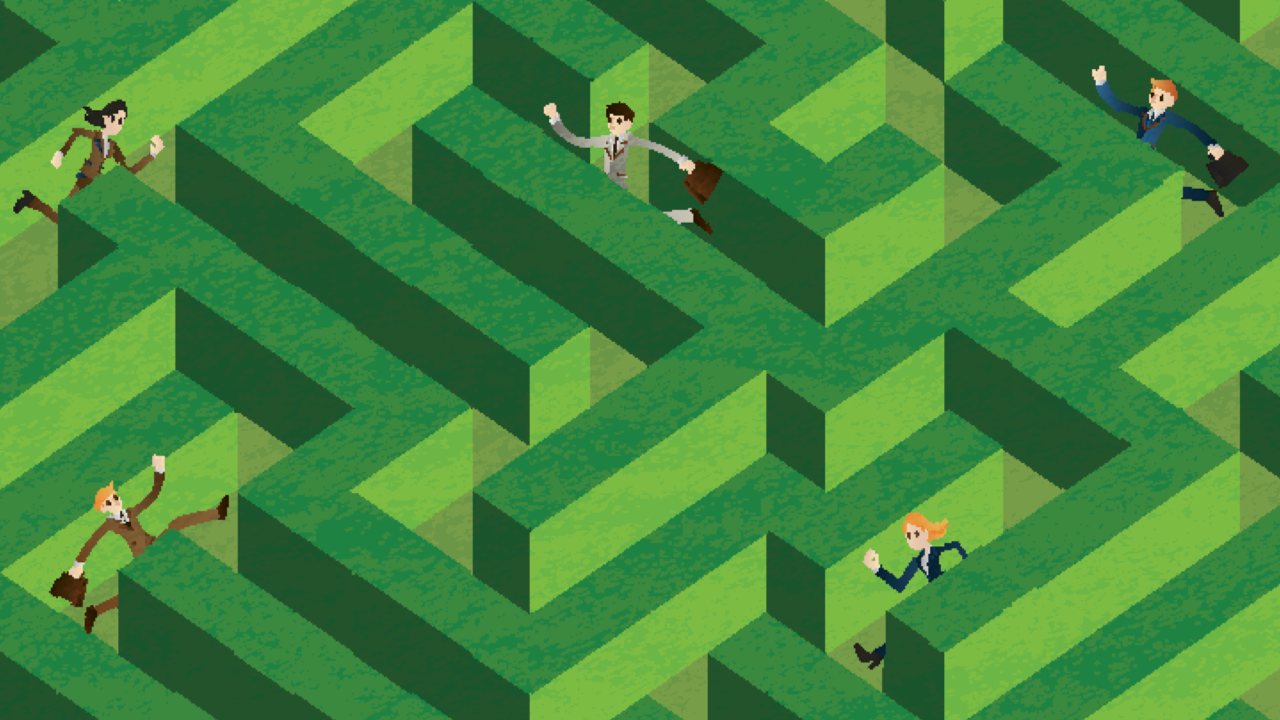 Working in a big corporate office can be a blessing and a curse. On one hand, you have a ton of resources at your disposal — technical help, creative teams, mentors, a well-stocked supply room and anything else you need just a purchase order away. But on the other hand, the bureaucracy of a corporate setting can easily put a damper on new ideas and slow down the work you need to get done. This post originally appeared on The Muse.

Between needless policies, endless paperwork and a lack of decision-making authority, you can start to wonder if the corporate rule-makers are actively trying to make your job harder. The truth is, you probably won't be able to single-handedly rid your company of this kind of ridiculousness — er, bureaucracy — anytime soon. But, by facing it head-on and dealing with it the correct way, you can make it a lot less frustrating on yourself and your team.

After spending a few years in the corporate world, here are the things I found most frustrating — and how I learned to deal with them proactively.

The Issue: Lack of Transparency

Unless you're in the C-suite, chances are you're not going to get much information about your company's business decisions. Even if you're in a supervisory role, you'll probably be blindsided by unexpected announcements, new initiatives and policy changes.

Take my own office: About a month ago, four of the employees in my department were called into a meeting where they were laid off — all without my prior knowledge. As their supervisor, I rushed to my manager to ask what she knew about the situation. Turns out, she had no idea the layoffs were happening, what information they were based on and if there were more coming.

The same thing happened when our company was purchased and merged with another company. Changes in structure and management were conveyed only to certain departments, leaving the rest of the employees to depend on rumours until the information was strategically filtered down.

There's really no guaranteed way to gain insight into your company's inner workings — if the CEO doesn't want you to know, you probably won't be able to find out. However, it doesn't hurt to regularly communicate with your supervisor and ask what he or she knows about certain situations. I've found that even if my manager can't give me many specifics, I can glean occasional nuggets of information (which at least give me a piece of the big picture, even if I can't see the entire thing).

The other side of dealing with a lack of knowledge (and the frustration that comes along with it) is to focus on being agile within your role. Hard as it may be, if you can learn to accept change in a graceful and calm manner (rather than complaining or constantly asking why things can't go back to the way they were before), you'll have a much easier time adjusting and taking the changes in stride.

Check out any company's handbook, and you'll find policy after policy regarding everything from expected behaviour to the dress code to taking days off. And for the most part, you probably don't question why these policies are necessary.

That is, until you come across a rule that specifies something absurd: For example, that PTO can only be requested in half or full-day increments, instead of by the hour (and half hours? Forget it!) — so you have to use four hours of that precious holiday time for a doctor's appointment, instead of just one. Or, the rule that states that hourly employees can't use their mobile phones to text or surf the internet even when they're off the clock during lunch and breaks.

For an office full of adults who know how to get the job done? These policies seem unnecessary and unfair.

Frustrating as the rules may be, there are probably valid reasons for them. I've found that it helps me accept (and enforce) them if I'm able to get more information about those reasons. If, for example, I find out that our PTO system simply can't process anything other than four or eight-hour requests, I feel more satisfied than assuming our HR department simply wants to force us to use up our hours as quickly as possible. (I also know, given that this is the only reason for the rule, that it may be possible to skirt it — like allowing an employee to skip her lunch hour to make up for that doctor's appointment that made her late.)

The Issue: Lack of Decision-Making Ability

Until you're in a director-level position, you really don't have much leeway to make decisions on behalf of your team, clients or even, really, yourself.

For example, my team's primary function is to set up clients' software to transmit insurance claims electronically, but we were also recently handed the responsibility of responding to invoice disputes. So clients would call in, irate that they were charged for twice the amount they should have been. We'd be able to research the issue to some extent, since we could remotely log into their system.

But the catch was, even if we did find that the invoice was incorrect, we didn't have access to the client's contract, which spelled out what they were and were not responsible for paying for. Even if it was apparent that the client deserved a credit for overpaying, we weren't authorised to give it to him or her. We had to transfer the client to another department, then had to go up through the ranks to get the approval. It was exhausting and infuriating for everyone involved.

Whatever position you work in, you likely experience this, too. You may not be authorised to make decisions, change processes or go out on a limb for a client without proper approval — which can make for some uncomfortable situations.

If I know ahead of time that I'm not the correct person to make a change or give approval for something, I like to give full disclosure of that from the get-go. So, when talking to a client about an invoice, I'll preface the conversation by explaining, "I'm going to help research this problem, but to actually get your invoice corrected, I'll have to transfer you to our customer service department, OK?"

By setting the correct expectations with anyone involved, you'll eliminate the frustration that would have come if you waited until the end of the conversation to explain your lack of authority.

While you may have an endless to-do list and a full docket of projects, actually making progress on those items often turns out to be easier said than done. Instead of diving right in, you first have to create a project plan, detailing who you'll need to involve, the expenses you'll incur and an expected time table.

To get feedback on it, you'll email it to your boss — and when you don't hear back after a week, you'll send a few follow-up messages. You'll wait for him or her to get approval from up the line and only then, weeks after you "started" the project, will you actually be able to start.

Sound familiar? In environments like this, it's hard — and incredibly frustrating — to actually get anything done.

Unfortunately, resisting an existing approval process, long and tedious as it may be, will only make it take longer. My employees, for example, often come to me to complain about a particular way of doing things, and every time, I'll ask, "Can you document a few examples?" After all, that's the only way I can determine if a change can be made — and present it to the higher-ups if so. If my staffers aren't prepared with those examples, that adds at least a day or two to the process — but if they're ready, we can get started right away.

Same goes for drafting project plans, filling out paperwork and crafting project plans. Yep, they're a pain, but if you can anticipate the need for them and get started ahead of time, you'll a head start (and you'll avoid the frustration of hearing your boss repeat, "Have you documented this?"). Pro tip: Try creating reusable templates you can use when asking for approval, suggesting a change or presenting an idea.

At the end of the day, rules and policies are there because they make it possible for business to run smoothly. They may be frustrating, but they're not going anywhere. But by adjusting the way you deal with the bureaucracy, you'll be able to more easily navigate the waters — and you'll make a big difference in your everyday work life.

How to Deal with the Worst Organisation Bureaucracy [The Muse]