Connecting all the webapps and services you use and making them work together for you is all the rage, but the two established services for doing so, IFTTT and Zapier, are now joined by a new heavyweight: Microsoft Flow. It’s time to compare these three powerful options to see which is the best, and for whom.

Automation services do one simple thing: they create cause and effect links between the various web services you use. Want to save every photo you’re tagged in on Facebook to your Dropbox account for safe keeping? Automation makes that happen behind the scenes, without you lifting a finger. If This Then That (IFTTT) has long been one of our favourites for this, but that doesn’t mean it’s the only game in town. Zapier is a similar service that’s been around for a while and largely aimed at business users and enterprise services. Microsoft recently released Flow, the newest contender here. Let’s take a look at each of them:

Regardless of which app you end up using, all of these simplify your life by automating basic tasks you’d otherwise have to do manually. Which works best for you depends entirely on your needs. 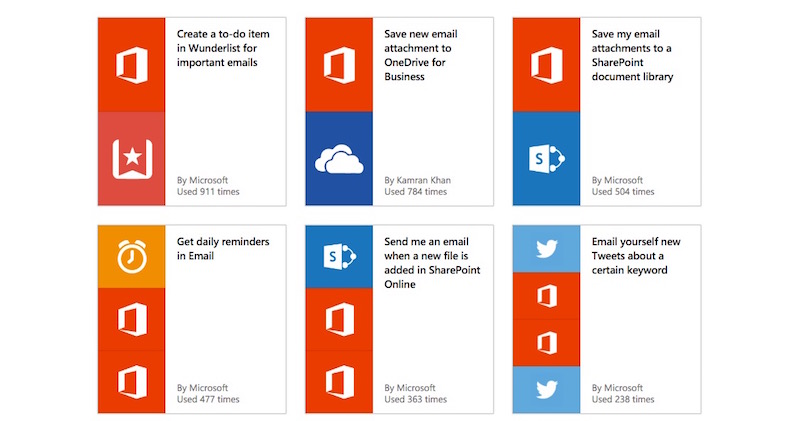 Each of these three services has strengths and weaknesses when it comes to which third-party apps they support, but how many is an easy enough question to answer:

Numbers aren’t the important thing here though. The main obvious distinction between Zapier and IFTTT is the type of app. Flow supports so few that it’s barely worth discussing, but it shouldn’t be surprising that it’s made for inter-Office app integrations. Flow does support a handful of third-party apps, including Slack, Facebook, and Instagram.

IFTTT supports mostly consumer-facing software. This includes every social network you can imagine, but also connected home devices like the Philips Hue and Nest Thermostat. Pretty much all of IFTTT’s recipes come from apps common users need, from Facebook to Spotify. IFTTT is also free, which sounds great on paper, but does mean the third-party integrations can be a little janky at times. For example, you’ll likely experience a bit of a delay with some recipes. It’s rarely a long delay, but it’s definitely not as instantaneous as Zapier tends to be.

Where IFTTT focuses on connected devices and common web apps, Zapier taps into the business world. Which isn’t to say Zapier doesn’t have plenty of consumer-friendly app integrations. It certainly works with apps like Wunderlist, Evernote, or Dropbox. But instead of going after connected devices, which Zapier skips over entirely, it goes after specific business software. This is most obvious if you take a look at Zapier’s explore page. Here, you can sort apps by type, like of “accounting,” “call tracking,” or “HR.” Depending on what you do for a living, you’ll find Zapier helpful or useless overkill, so take some time to look at what apps it integrates and what it doesn’t. If you’re looking at Zapier for personal use, that’s fine, but it might prove too much and a little too irrelevant for the average user.

Ease of Use and Setup 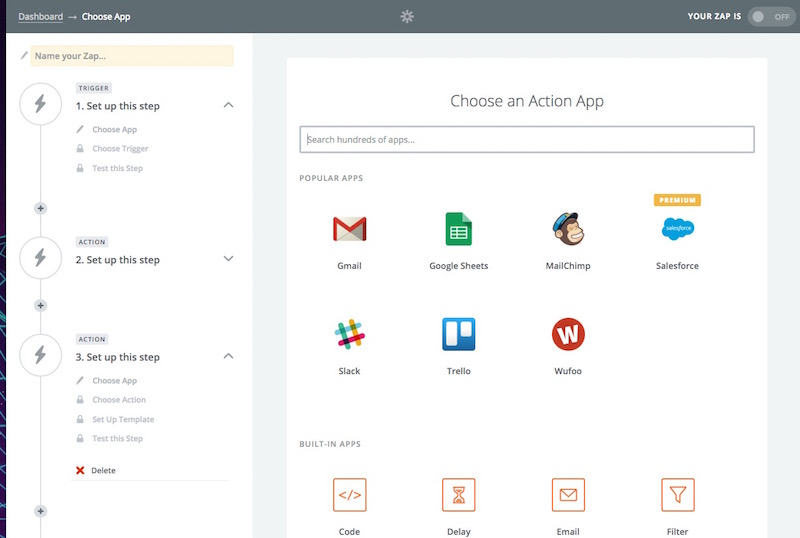 Since automation is all about simplifying, it’s important that the software you use to do so is easy to use. Otherwise, you end up wasting more time setting it up then you’ll save.

This is where things start to break down. IFTTT and Flow are definitely the easiest to use, but you can do tons more with Zapier. IFTTT and Flow both work under a simple idea: a single trigger leads to an action. This makes IFTTT and Flow easy to set up and start using right away.

To create an IFTTT recipe, all you need to do is find the service you want to act as a trigger, pick the option that triggers it, then pick what you want happen. This can be just about anything as long as IFTTT supports the app you want to connect to, from turning an email into a Trello card to sending yourself an email when it’s going to rain tomorrow. Its browse function isthereal starhere. Don’t know why or how you’d use IFTTT? Just look at all the recipes other people have created and use the ones you like. You can browse by general popularity or by specific app, so if you want something to happen using Instagram, you can search for that, or Dropbox, or Evernote, for example.

Flow works in a similar fashion and is just as easy to use, but like we mentioned, it’s only useful for people in the Office ecosystem. Flow can make your life a lot easier with templates like this one that create a task on Wunderlist when you mark an email in Office 365 as important or this one that sends you a text when your boss emails you. Creating your own template works just like it does in IFTTT. Pick your trigger, then your action, and you’re done. However, all of these services are also supported by IFTTT. Pretty much everything in Office 365 is available on IFTTT, so it’s not totally clear why you’d use Flow over IFTTT yet.

Because of the amount of customisation Zapier affords, it’s a little more overwhelming than IFTTT at the start. It can be as simple as IFTTT, with just one trigger leading to one action. Or you can make it so one trigger leads to several actions. Or, if you really want to be specific, Zapier supports filters, which make it so triggers only run when it finds keywords. For example, you can set up an email trigger that only goes off when “vacation” is in the body of the email. Because of the variety of options, creating even just a two-step zap takes a little more time in Zapier than it does in IFTTT.

IFTTT is clearly the winner here. It takes less than five minutes to learn how to use it, and the simplicity of browsing recipes makes it so even the the least technically inclined can figure out why they’d use it. 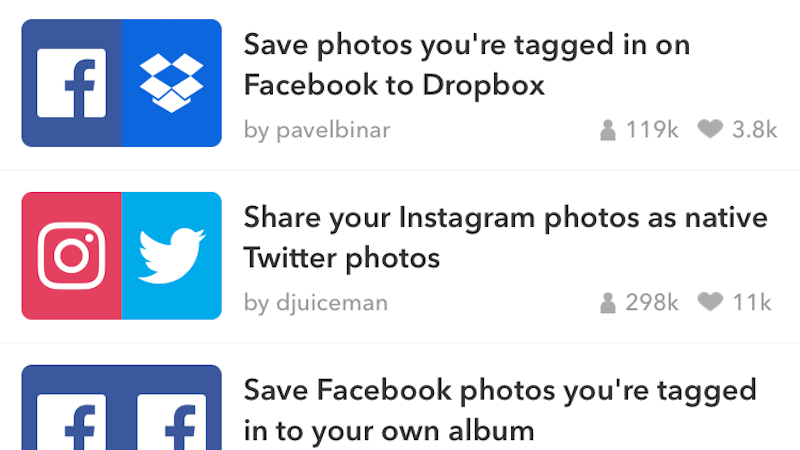 Considering Zapier doesn’t have mobile apps, IFTTT is the winner if you prefer to work off your Android phone or iPhone. Aside from the excellent IF apps, IFTTT also has three single purpose apps: the DO Button that operates like a manual trigger for recipes, DO Camera that will share photos to multiple services at once, and DO Note that does the same thing for text. More importantly though, the IF app is fully-featured. Anything you can do on the web version of IFTTT, you can do in the mobile app. Even better, the mobile app actually integrates with your phone’s services too, so you can do things like save iOS photos directly to Dropbox or automatically send a text on Android when you arrive at a location. The fact is, the IFTTT mobile apps are fantastic, can do a ton of different things, and like the webapp, they’re free.

While it’s unfortunate that Zapier doesn’t have mobile apps, having nothing to offer is better than what Microsoft did with its Flow app. Microsoft Flow is only available on iPhone right now and is just a wrapper for the web version. In fact, when you try to create a template, you’re taken to the web site. Again, Microsoft Flow is still in preview mode so we won’t complain too much, but the app’s pretty useless right now.

IFTTT’s the best here kind of by default, but it’s worth pointing out the strength of its mobile apps nonetheless. You could happily use the mobile apps exclusively without ever touching the desktop version, which is a pretty astounding accomplishment.

The Verdict: IFTTT Is Best for Most People, Zapier’s Great for Business Users, and Avoid Flow for Now

The winners here are pretty easy to declare. If you’re a casual user looking to automate a few basic things, go with IFTTT. If you’re a business user, or you’ve been using IFTTT for a while and wish you could do more with it, then go with Zapier.

IFTTT is powerful enough for most people, but more importantly, the massive database of pre-made recipes work like an instruction manual for how to use it.

You can look through “popular zaps” on Zapier too, but it’s not as intuitive or fun to browse. Implementing the popular zaps you find isn’t as easy either. Regardless, if you want to tweak, fiddle, and futz about with the specifics of triggers and actions, Zapier’s the webapp you want. That’s all beside the fact that Zapier’s extensive amount of enterprise apps makes it the obvious choice for anyone who uses niche business software.

We’ll cut Flow some slack here because it’s a preview build, but it’s still pretty hard to tell why it exists in the first place, or why Microsoft even released it in its current state. At a glance, it works exactly like IFTTT, but in an extremely limited capacity. It doesn’t add anything new to the table other than Wunderlist integration, which is easy enough to get around by using any of these hacky integrations on IFTTT. Right now, there’s no reason to use it other than pure curiosity.