The Types Of TV Shows You're Most Likely To Binge Watch 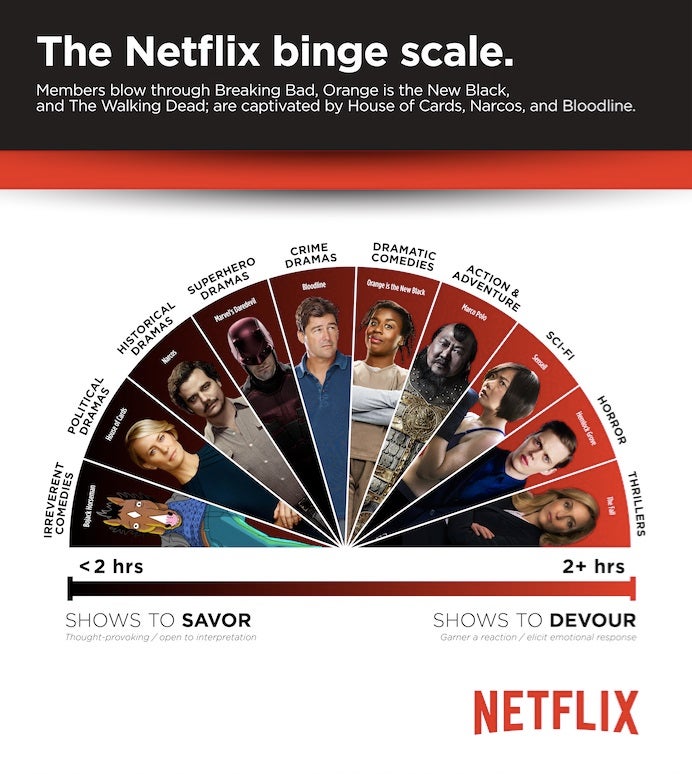 Nothing ruins getting to bed on time like a good binge-watching session. If you want avoid those late nights and lost afternoons, these are the shows that are most likely to keep your eyes glued to the screen, according to Netflix.

Netflix is finally using their streaming data to show what shows you're most likely to binge your way through, as well as the types of shows that you're more likely to savour. Behold! The official Netflix binge scale (pictured below). The scale is based on global viewing data of over 100 serialized TV series featured on the service, and gives an interesting perspective on our TV habits. We're more likely to binge on thriller, horror, sci-fi, action and adventure, and dramatic comedy shows, and more likely to savour crime, superhero, historical, and political dramas. We also tend to keep our irreverent comedy intake to a minimum each day so we have more time with our favourite characters. So the next time you're winding down for the evening, or taking a break from some productive work, you might want to consult the binge scale and make sure you're not watching something that will keep you saying "just one more."