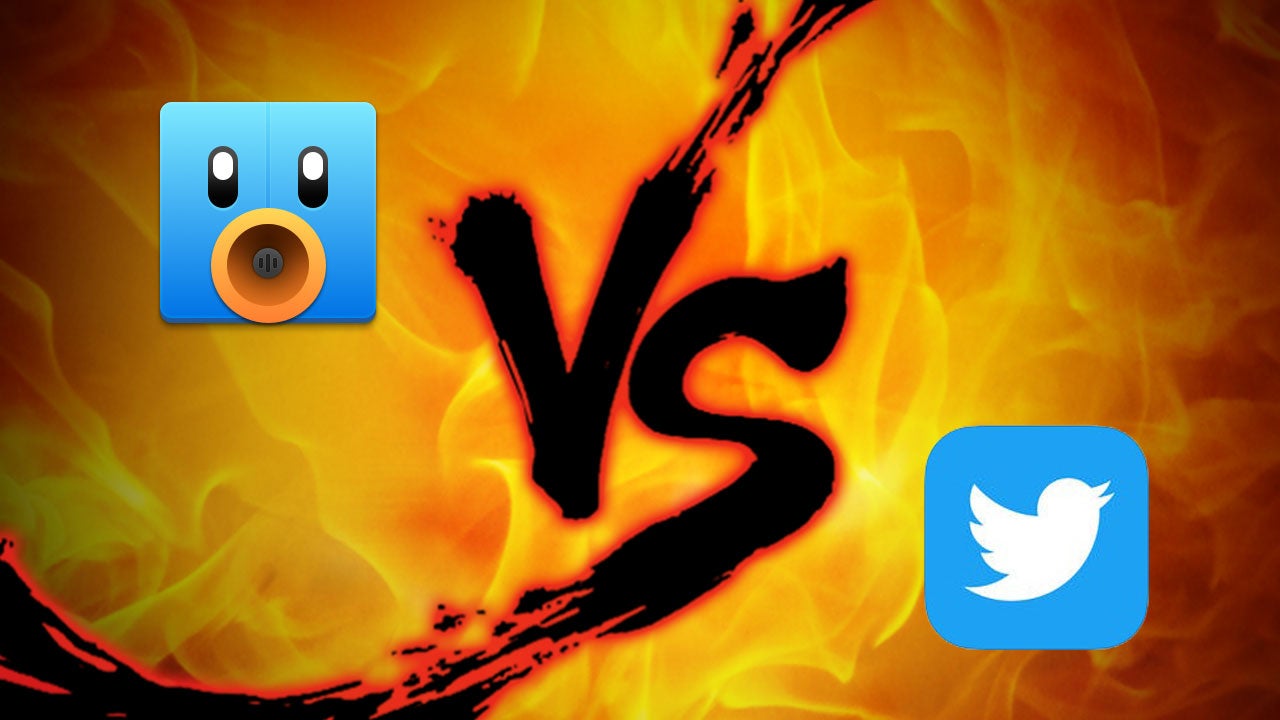 There are dozens of Twitter clients for the iPhone, but the official Twitter app and the third-party Tweetbot are two of the most popular. One's free, the other's pretty expensive at $US9.99 ($14.99). Let's dig into the main differences between the two, and see if the difference in experience is worth the difference in cost. 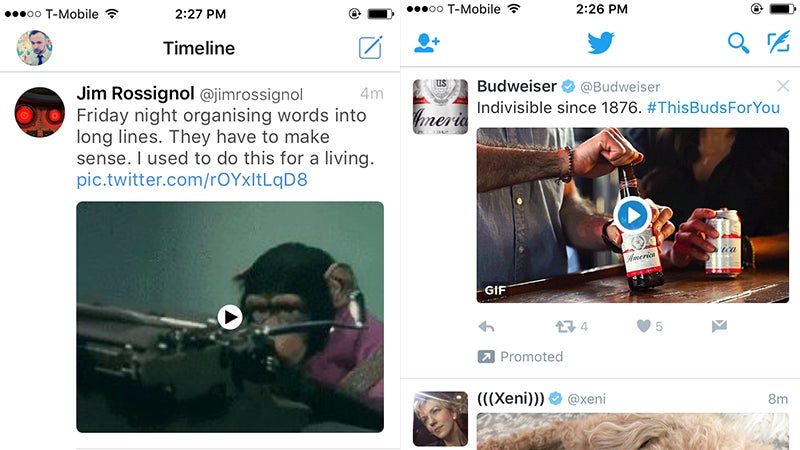 Tweetbot (left) orders your timeline, y'know, by time whereas Twitter (right) does whatever it wants Because of the way Twitter works, developing a Twitter app is a pain. It's expensive for developers because Twitter charges them for keys to access the site, which means developers tend to pass that charge over to you, and then revoke access when you get too popular. Subsequently, most good Twitter apps tend to be on the pricey side, Tweetbot included. Let's start with a quick look at both apps:

Assuming that the $US10 ($14.99) price tag on Tweetbot isn't enough to turn you away outright, picking between the two really depends on how you use Twitter. 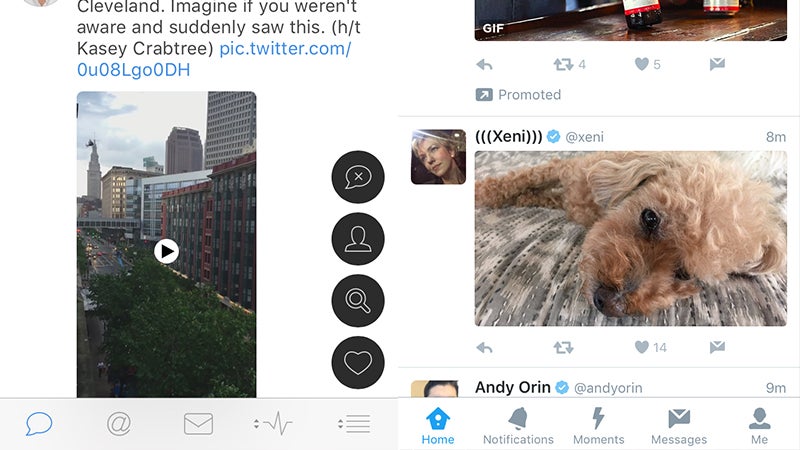 Don't like the tabs on the bottom? Tweetbot (left) lets you change them up The official Twitter app is about as vanilla as an experience as you can get. Open it up and you'll find an interface similar to the web site, with tabs on the bottom for your notifications, moments, DMs, and your profile tab. Functionality in the app is the same as the site as well. You can't alter any of this. You can't change the tabs, the colours, or even adjust the font size. With the Twitter app, what you see is what you get.

Conversely, Tweetbot has a variety of customisation options. For example, the bottom tab bar has two buttons on the right that you can swap out for whatever function you want: activity (which includes mentions, replies, favourites, and new follower information), search, profile, likes, mute filters, or lists. If you use lists to tame your Twitter feed, having access to them in the tab bar makes your life easier. The official Twitter app tucks those lists behind several taps. If you're using Tweetbot on an iPad or a iPhone 6 Plus, you also get support for columns in landscape mode, which lets you see two tabs side-by-side. Tweetbot also allows you to chose between a couple fonts, swap between username or full name for your timeline, alter the image size in your feed, and even customise the avatars. There's a dark mode included if you prefer to do your tweeting late at night in a dark room.

Tweetbot also has extremely customisable notifications, so you can tweak them so you only get the notifications you want. Tweetbot has options for links too, allowing you to open links in Tweetbot, Chrome, or Safari, and even includes a reader view that strips away the visual styling of an article.

In the end, if you want an app you can customise, Tweetbot's the one you're looking for. The official Twitter app doesn't allow you to change anything. 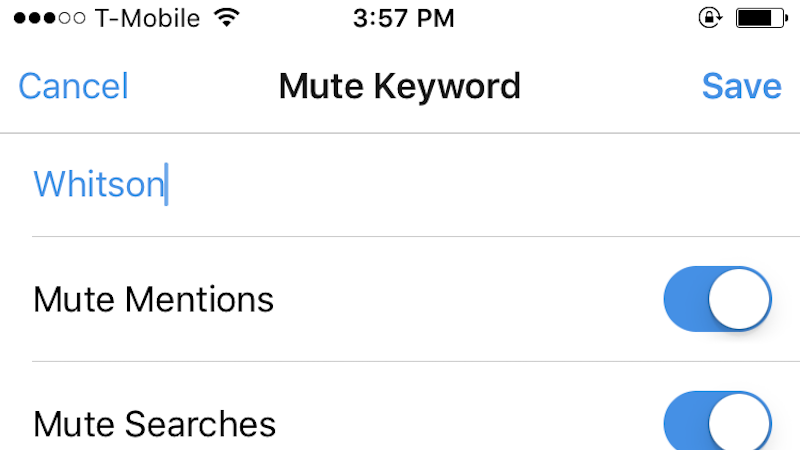 Tweetbot's mute filters let you get rid of any part of Twitter you don't want to see Twitter is a noisy place. People tweet dozens of times a day, publications don't seem to ever stop, and there's always a chance for spoilers if you're anticipating any type of media at all. Tweetbot has ways around this.

Tweetbot has a powerful set of mute filters. You can mute keywords, phrases, users, or hashtags. When you do so, any tweet that contains those things will not show up in your feed. This is great during sports playoffs when you're not a fan, election seasons, or if you're avoiding spoilers for something. If you do mute something, Tweetbot's also smart enough to still show you replies that might mention those things, so you're not totally cut off from the world. The downside is that these mute filters don't carry over to the web version of Twitter, so it really only works inside the Tweetbot ecosystem (which includes the $US10 ($14.99) Mac app). If you only use the Tweetbot iPhone app, it's great, but if you're also using the web version on your desktop computer, it's a bit annoying.

Plus, like pretty much all third-party Twitter clients, you won't see ads in Tweetbot. Considering how often those annoying sponsored posts seem to pop up, it's a nice little addition if you're not a fan of advertisements. 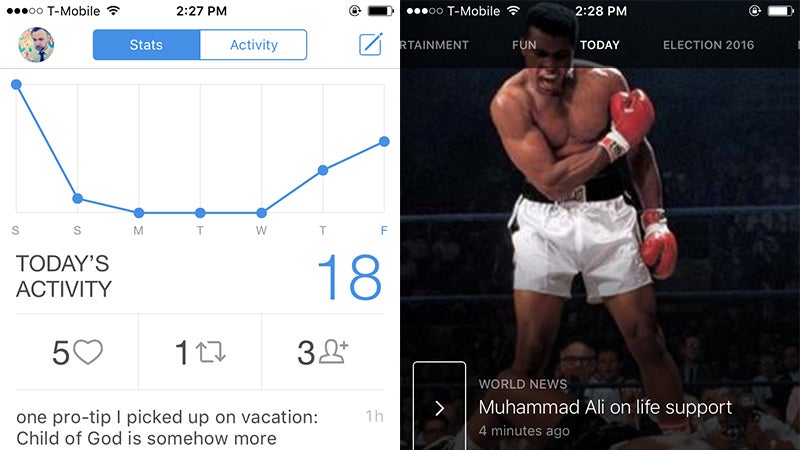 While Tweetbot lets you take a close look at what's happening in your feed, Twitter likes to show you a more global view The one area where the official Twitter dominates Tweetbot is in support for new features. The folks behind Twitter love to introduce new little features all the time, whether that's fun stuff like polls or weird features like Moments. If you're using the official Twitter app, you will almost always see an update in the app to support these new features immediately.

Tweetbot doesn't do this at all. Heck, Tweetbot still doesn't support polls. For whatever reason, many of the cutting edge features that Twitter decides to roll out don't end up working on third-party clients. Of course, that's also a feature of Tweetbot if you like a simpler Twitter experience as a whole.

The Verdict: Tweetbot's the Better App, but Twitter Is Free, Still Does Enough for Most People

Let's be honest here: the general population who just glances at Twitter a couple times a day doesn't need a $US10 ($14.99) Twitter app. If you only manage one account, don't mind seeing a bunch of extra garbage like ads and obnoxious hashtags, and it doesn't bother you when Twitter adds some half-baked new idea to the app every week, then the official Twitter app is all you need.

If you spend a lot of time on Twitter during the day, then Tweetbot's the best app for making that experience better. The mute function alone is worth the price of admission for some people, but the customisable toolbar and activity menu make it much easier to manage large scale accounts.