Mobile document scanners are possibly the most boring apps imaginable, so it’s puzzling they’re also some of the most awful, sleazy and confusing apps you can download. It should be simple: Scan receipts, digitise notes, sync to the cloud, that’s it. Useful, but not exciting. But there are dozens, all nearly identical. Some are free. Others are a couple of bucks. Most have in-app purchases. All of them are confusing as hell. Document scanners have been in app stores since they launched. I remember downloading a random scanner app back on my iPhone 3G when I needed to scan a document for school. Like faxing apps, document scanning apps have been necessary evils most of us only need rarely. Perhaps because of that rarity, it’s become near-impossible to find one that just works out of the box without some weird payment scheme.

Let’s take a look at a few of the most popular and free document scanner apps, FineScanner (iOS), Scanbot (Android/iOS) and CamScanner (Android/iPhone). Each of them is free to download, but they’re all limited unless you unlock bits and pieces of them with increasingly annoying in-app purchases.

The In-App Purchases Are Out of Control 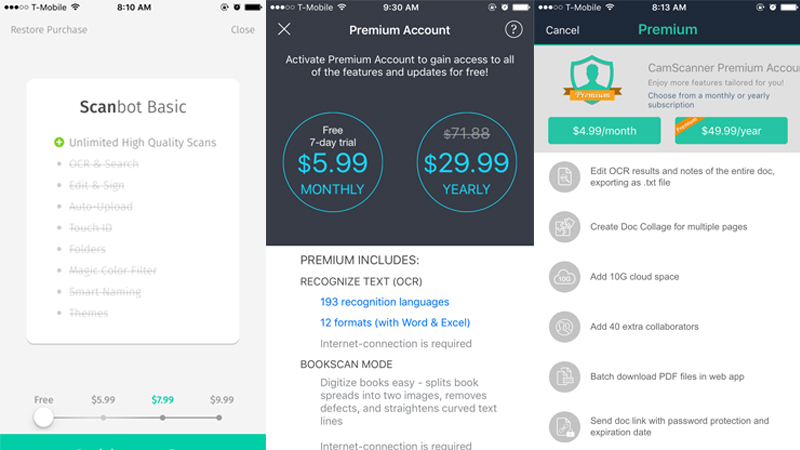 Scanbot at least makes in-app purchases very obvious, but FineScanner and CamScanner do not.

Scanbot at least makes in-app purchases very obvious, but FineScanner and CamScanner do not.

Let’s start with Scanbot. It’s free, and has multiple in-app purchases. It’s also one of the most recommended iPhone scanner apps available. Out of the box, you can scan documents and save them locally. For an in-app purchase of $9.99, you get optical character recognition (OCR) and search, as well the ability to sign documents digitally. For $12.99, you get automatic uploads, Touch ID protection, folder support, a colour filter, smart naming and themes. For $14.99, you get everything listed above plus an extra copy of the app for a friend. That’s four versions of the app locked behind three paywalls. Arguably, none of these paid features are necessary for most of us, but it still makes for a confusing experience. At a glance, without digging through everything, most people won’t know which features they will need and will likely just overpay to be safe. It’s the same kind of scheme Microsoft uses with Office.

FineScanner and CamScanner are even more confusing. The free version of CamScanner is ad-supported and adds watermarks to any PDFs you save. You can get 200MB of free cloud storage by registering for an account with CamScanner. For $7.99/month or $79.99/year you get more cloud storage, auto uploading, batch downloading and a few other random features. Beyond the in-app purchases, CamScanner gets confusing because there are four versions of the app available. Besides CamScanner Free, there’s CamScanner+ for $0.99, which is the same as the free app, but doesn’t include the ads or watermarks. There’s also CamScanner Pro for $7.99. I have no idea what the difference between this and CamScanner+ is. The ad copy in the iTunes App Store of each app, CamScanner Free, CamScanner+ and CamScanner Pro, is identical, so good luck figuring out which one you want. Oh, there’s also CamScanner+ with Symantec, which is made for enterprises using Symantec tech. That one’s $US1.99 ($3), and unavailable in the Australian store.

FineScanner is even worse. A premium account is $7.99/month or $30.99/year (no, that’s not a typo.) With the premium account you get OCR, a book scanning mode, no ads and password protection for PDFs. You can also pay a one-time fee of $89.99 to unlock those same premium features forever. Or, you can pay $38.99 to unlock the OCR mode, $4.49 to unlock the BookScan mode, $9.99 to remove ads, or $9.99 to get the password protection for PDFs. That makes seven possible in-app purchases (the US App Store actually lists 10 options but I can’t figure out what the hell the other three even do). I wish I was kidding about this. 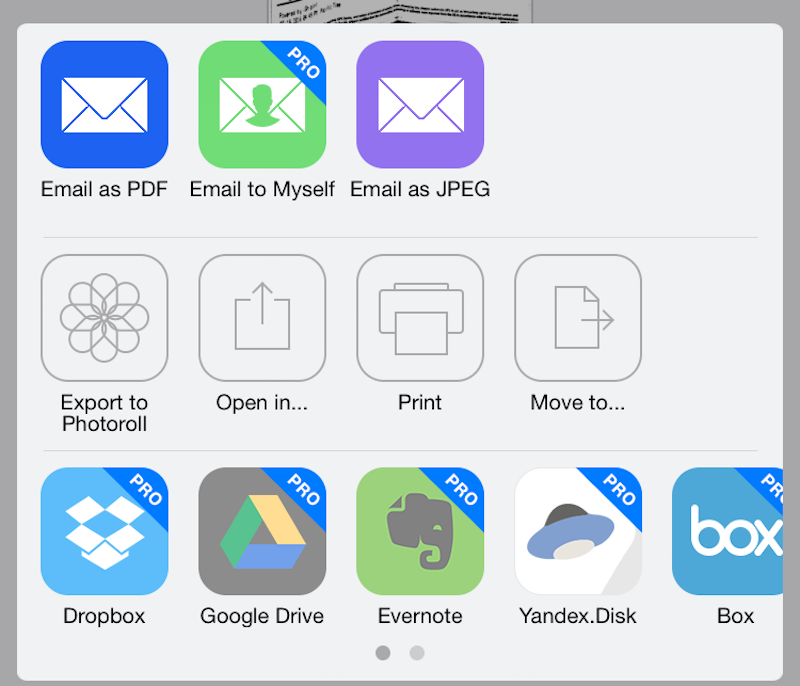 You could pay to unlock “Email to Myself”, or you can just email it to yourself as a PDF. You can even pay to use Dropbox… or just use the Open in… button.

FineScanner is the worst offender here, but plenty of other popular apps lock away extremely simple features for no discernible reason. iScanner Free not only has ads in the free version, it also requires a Pro account to use the “email to myself” button. That’s ridiculous, because you can use the regular “email” button for free, and then just type in your own email address and it works. TinyScanner does the same thing, and also requires a pro account to link into cloud services like Dropbox. This is nonsense because TinyScanner supports the “Open In” function, where you can just open and save your PDF in another installed app… like Dropbox or Google Drive. They’re asking you to pay for features that you already have on your phone.

Sometimes It’s Better to Just Buy a Good, Honest App than Fiddle With Free Ones

Trying to pick a decent app for the absurdly simple task of scanning paper is a pain. Scanbot is probably the least scammy free app, but the way the in-app purchases works turns me off. This problem isn’t limited to document scanners though., Lots of productivity apps lock away obscure features, but document scanners take it to a new, sleazy, creepy level.

After looking into all of these apps and a ton of other options, I ended up settling on an app I actually had to pay six bucks for, Scanner Pro 7 (iOS-only, Android users can just use Google Drive though, which is free. Evernote’s Scannable and Microsoft’s Office Lens are also solid free options, but both require accounts from their parent companies.) Why? Because it’s a one-time cost. The only in-app purchases are to send faxes. Every feature is included, including text recognition, password protection and editing. For $5.99, I’ll never need to think about this stupid app again.