Food for when you’re exercising is a whole product category these days. There are sticky sweet energy gels (every marathoner’s frenemy), plus a variety of bars and chews that are pretty much all expensive and taste terrible. The book Feed Zone Portables has an alternative: Homemade, portable food that has the nutrition you need, while tasting great. I’ve read this book and made several of the recipes. I’ll give you the verdict right up front: These recipes are delicious and pack well. But most shouldn’t be kept in your running belt pocket all day — they could become unsafe. We’ll get to that in a bit.

Who These Recipes Are For Food for the middle of a long run, or a long day cycling, kayaking or any other endurance activity, has to fill a pretty tall order. It has to be easy to eat even when your mouth is dry (goodbye crackers), and it has to agree with every part of your digestive system (goodbye prunes and jalapeño poppers). Nutritionally, you need this kind of snack to be mostly carbs, to give your body plenty of fuel for the long haul. Oh, and it can’t be the kind of thing that’s ruined by being smushed in your pocket for hours.

Gels fit all these requirements, and so do other foods made for endurance exercise, like PowerBars and Clif Shot Bloks. But they’re not to everyone’s taste, and they can be expensive: Over $1 for a 418-kilojoule (100-calorie) gel is a typical price. Ask experienced runners and cyclists what they eat, and you’ll hear about raisins and gummy bears and the occasional PB&J sandwich. Some will stuff a mashed sweet potato into a ziploc bag and bite off the corner when it’s time to suck it down.

All of these are sweet, though, and what drew me to Feed Zone Portables initially were the little packets on the cover labelled “savoury”. Is it possible to eat on the run without sucking down something that tastes like synthetic cake frosting?

The answer is yes, according to the authors, exercise physiologist and cyclist Allen Lim and chef Biju Thomas. They’re writing for cyclists, but runners and other exercisers have similar needs.

The book opens with the usual chapter on why the book exists, which I started flipping through on the way to the recipes. But wait — there’s really good stuff in here! Some of the highlights:

The information in this section is really solid, so give it a read if you want to know more about how your body works when you’re eating on the run.

The snacks in this book follow a few basic plans, each with sweet and savoury variations. They include:

There are also waffles, “take and make” recipes that can be prepared in a hotel room (tip: bring a waffle maker), and an “aha” section of the least fussy recipes that you can make with whatever is in your kitchen. For example, instead of layering your rice into cakes, you can just mix it with some blenderised leftovers and scoop it out into balls.

There’s one major caveat about many of these recipes, especially the savoury ones. They should probably stay refrigerated for food safety reasons. For example, there’s a rice cake with (deliciously seasoned) beef inside. Would you walk around with a pocket full of rice and beef, and think it’s OK to eat after a few hours? In a food safety post on the book’s website, Lim says: “So far, we have had no problems with rice cakes cooked fresh in the morning lasting about 5 hours in the back of a jersey [cycling shirt] pocket.”

Food safety expert Ben Chapman isn’t buying it. “No one has been sick that they know of. And the sample size is probably pretty small,” he said in an email. Cooked rice can harbour food poisoning bacteria. At room temperature, cooked food is safe for four hours. In the heat, next to your body, it could grow significant amounts of bacteria even sooner.

Because of that, I probably wouldn’t eat a rice cake after many hours on the trail on a hot day. I might keep one on ice until the run starts, and then eat it in the first hour or two of my run (saving the gels for the later hours if I’m running for a really long time). Cyclists or hikers could carry these with an ice pack, if you don’t mind the few grams of extra weight. They would also work fine if you have a place to stash a cooler, like if you know you’ll be running past the same spot a couple of times.

Since I’m not actually training for a marathon these days, I actually find these recipes really handy as grab-and-go snacks for before or after a short workout. They’re actually so good I ended up eating a selection of them for lunch on more than one occasion.

I made five recipes, three of them rice cakes. I also wrapped them in the recommended way, which is similar to this method we’ve detailed for wrapping a sandwich. If you get the snack-to-paper ratio right, you get two tabs on the bottom and can tuck one into the other. I was sceptical, but this actually worked really well. (You could also secure the little packages with rubber bands or tape, if that’s easier.)

All of my sample recipes survived being carried in a pocket for hours, and didn’t fall apart or break. They all came out as little bricks or pucks, just like they were at the start, and they all tasted good. Here’s the rundown, and while we’ll tell you how to make them, you’ll have to check out the book for the full recipes with measurements: How they’re made: Cook red lentils and sushi rice together. Season with a mix of yogurt, tomato paste, onions and spices.

How they taste: A little bland, but seasoning is easy to adjust. These actually perfectly satisfy the pizza crust craving I get on long runs. (Why pizza crust? No idea.)

(Sorry — no photo because they are all in my belly.)

How they’re made: Cook ground beef and onion in a pan, and season with fresh ginger, soy sauce and molasses. Then layer the cooked mixture with sushi rice. Cut into blocks when cooled.

How they taste: I ate half the batch before the other half was cooled. Um, yeah, they’re good. The beef is savoury and flavorful. I would have preferred more beef and less rice, but then it might not have made such neat little bricks. How they taste: Like sweet rice and plain raspberries. Underwhelming, compared to the other amazing recipes in this book. Still beats a PowerBar, though. How they’re made: Sauté onions and mushrooms, then mix with eggs, rice and swiss cheese. Bake in muffin tins (I used silicone because the frittatas don’t stick, and they’re easy to pop out).

How they taste: Excellent. Delicious. Amazing. I’ve tried mini-omelettes before, and always hated the taste of cold eggs. But somehow, the extra ingredients overshadow that flavour and eliminate the slimy texture. 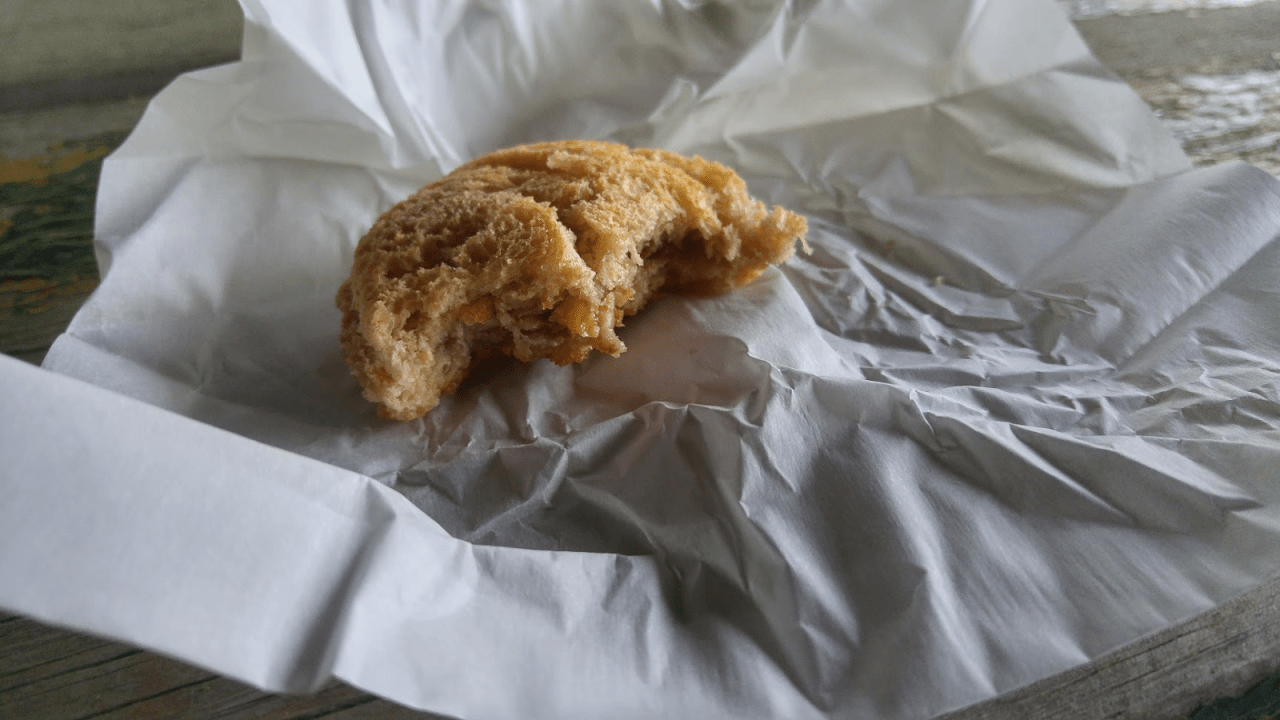 How they’re made: Mix chopped bananas, walnuts, brown sugar and cinnamon. I used the “quick crust” method, where sandwich bread substitutes for a real pie crust. You sandwich a dollop of filling between two slices of bread, cut the whole thing out with a glass or a cookie cutter and then bake until toasted.

How they taste: This is another winner. The toasted bread actually made a really good crust, and with the filling it tasted dessert-like but not sickly sweet.

These snacks pass the deliciousness and portability tests with flying colours. Every recipe I tried was at least good, and many were amazing. The book is full of recipes I can’t wait to try, like the Curry Potato and Chicken Pot Pie, the Sweet Cream Grits and the Baked Pasta. There’s also a chapter of “sticky bites”, like these chocolate and sea salt ones. Yum.

I am disappointed by the food safety issue, though. If you choose to keep any of these snacks in your pocket all day, do so at your own risk. You can still fuel yourself on the last few hours of a long run with one of the recipes that’s more like a traditional cake or cookie, like the Snickerdoodles or the Spiced Pumpkin Cakes.

If you’re used to eating packaged products like Clif bars when you’re too busy for a meal, any of the recipes in this book would be a satisfying alternative. They’re are a great addition to a lunchbox, or for a before- or after-workout snack. These snacks don’t have to be just for exercise, of course. I’m eating one right now, and I kind of want to try a raspberry rice cake, warm, with ice cream on top.

The book is available from Book Depository for $31.82.