A Gadget Won’t Save Your Baby From SIDS

I, and every new parent I know, am terrified of Sudden Infant Death Syndrome, better known as SIDS. It’s the leading cause of death for babies between one month and one year old, killing approximately 130 per year peacefully in their sleep in Australia. And so we check constantly to see if our babies are still breathing. Illustration by Sam Woolley.

Friends have asked me if this obsession dies down over time. I’m on my third baby, and I don’t worry as much as I did with my first. But if she’s been napping for more than, say, half an hour, I still creep into the room and stare at her chest until I can be sure I see it going up and down.

Can you blame parents of babies for being paranoid about whether our little ones are still alive halfway through a nap? We don’t even have a clear picture of why SIDS happens, so it’s hard to figure out exactly how much to worry. The risk is remote, but every parent is told (often at the hospital where their baby is born) that we must always put babies on their backs to sleep and maintain a safe sleep environment. So we take action every day, just in laying our babies down, to try to shift the balance against SIDS. It’s on our minds.

The current theory about SIDS is based on a “triple risk“: The baby has a subtle brain or breathing problem, they reach a stage of development where their body’s functions are temporarily “destabilised” and then a factor in the baby’s environment tips the balance against the baby. That factor could be secondhand smoke, or it could be sleeping on their stomach instead of their back.

Can Technology Help Us Stop Worrying?

I know I worry more than I need to; SIDS is rare. Knowing that doesn’t stop the worrying, though. And that’s why I was intrigued by the ads that keep showing up for me on Facebook, for a device that promises to worry about your baby’s breathing for you. 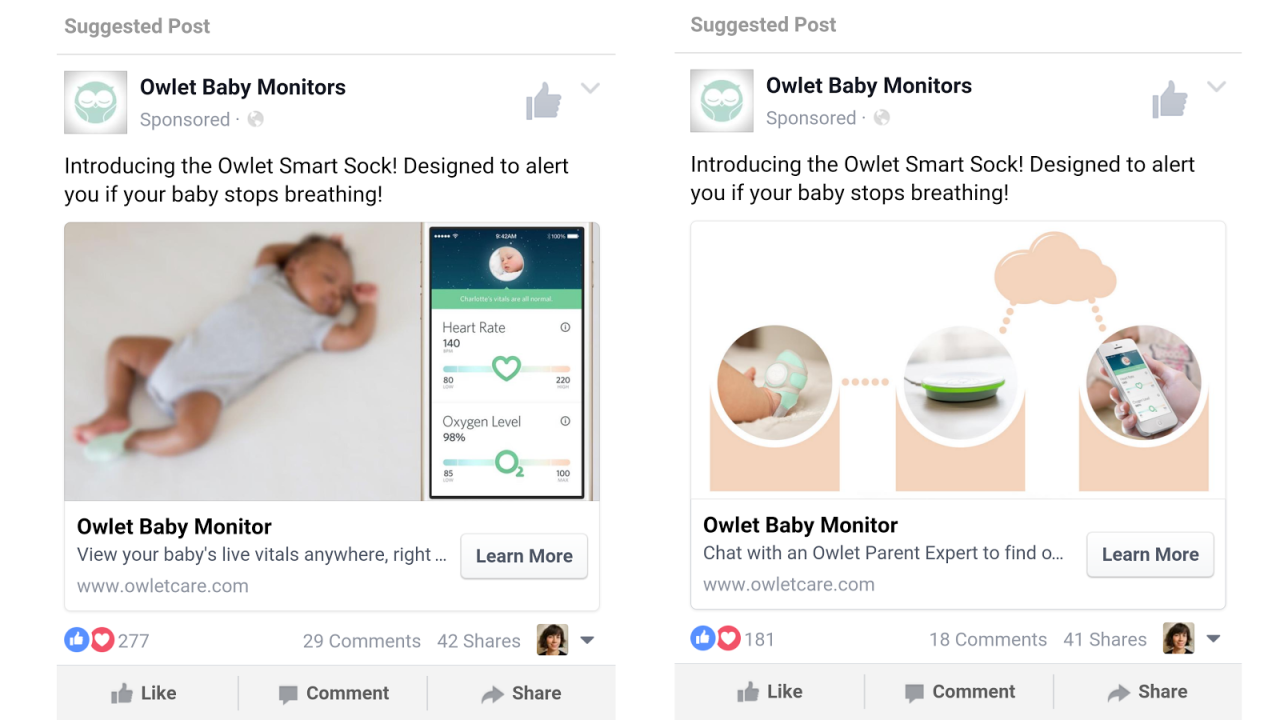 The device, Owlet, is wireless and fits in your baby’s sock. If your baby stops breathing, the company says, the app will sound an alarm. You can check your phone anytime you like (from the next room, from your date, from your business trip) to reassure yourself that your baby is still alive.

This sounds awesome. It also sounds like the ultimate in obsessive parenting: Do you really need to track your child’s every breath? It’s probably unnecessary. It’s also $US249 ($337), which is the only reason I haven’t bought one. It also doesn’t ship to Australia. If it were $30 at Target, I bet it would be considered standard-issue baby gear: Carseat, crib, nappies, breathing monitor.

Owlet isn’t the only gadget along these lines: Sproutling ($US299 [$405]), Mimo ($US199 [$269]) and Monbaby ($US169 [$229]) all offer, among their features, the function of telling you if your baby is still breathing. They each work a little differently. Mimo and Monbaby feel the motion of the chest; Sproutling checks heart rate; Owlet monitors blood oxygen in the same way as those finger clippy things in the hospital. None of these are sold in Australia, but the Babysense 2 and clip on Snuza function on a similar premise to the Mimo and Monbaby, detecting motion.

So will these monitors help in a real emergency? Owlet says it will alert you if your baby stops breathing, but it doesn’t say what you should do when it alerts you. Not that I have a clear plan for what I would do if my dark room peerings showed a non-breathing baby. I can envision my reaction, though: Pick her up, pat and rub her, scream for my husband, call 000, begin CPR.

Owlet’s website doesn’t consider this possibility. Their list of Common Questions includes only one in the right ballpark: “Does Owlet guarantee the safety of my baby? No… Your baby’s safety is your responsibility.” The rest of the top questions are about things like fit and washing instructions. Buried in the tech support section, Owlet gives a list of things to do if the device sounds a red alert. Basically, you should check the fit of the sock.

This seems strangely half-arsed for something sold as a lifesaving device: There are no instructions on how to use it to save a life. Either Owlet never thought of this (hey, SIDS is rare), or they’re being skittish about the fact that their product is not regulated or approved as a medical device. Still, my sneaking in and checking on the baby isn’t a medical device either.

I asked David King, a clinical lecturer in paediatrics at Sheffield University, why he doesn’t think that Owlet and similar monitors are useful for parents. He wrote as much in a paper in the medical journal The BMJ.

“These devices have never been tested in any meaningful way,” Dr King says. In other words, we don’t know if they could actually save a life. In the 1970s and 1980s, he points out, research showed that monitors did not prevent SIDS deaths, and possibly could not. This 1988 review published in the Annals of the New York Academy of Sciences mentions several deaths that occurred during monitoring where the babies could not be resuscitated. Just because you know a baby stopped breathing doesn’t mean you can do anything about it.

If a device isn’t helpful, are we better off without it? Using and checking a monitor could end up making you worry more, especially if there are false alarms. The authors of the 1988 paper noted that monitors increased anxiety in parents, especially when one parent wanted to use the device and the other didn’t. The monitors of the time were expensive and cumbersome, with wires that could accidentally disconnect. Today’s monitors should be simpler to deal with, although I could see date-night arguments breaking out over whether one half of the couple should stop checking their baby monitor app so much.

The founder of Owlet dismissed Dr King’s concerns by noting that he is not a parent, and thus can’t relate to the constant worry. “I’m not saying they should be banned or anything,” Dr King says. He just thinks parents should know that a monitor like this doesn’t “have some sort of medical role” and that the devices’ makers should avoid implying that they do.

After all, is there much of a difference between a breathing monitor like Owlet, and a video baby monitor that lets you snoop on your child’s rising-and-falling chest? Sometimes we just want another way to check in.

I can’t help thinking that if a person is worried enough to buy and use a breathing monitor, maybe they could put their nervous energy to better use — either instead of one or in addition to it. Here are some things that really could save your child’s life someday (or somebody else’s).

I won’t tell you to relax and not worry. SIDS is a real risk, and obsessive worrying may even be a universal aspect of parenthood. So the best you can do is keep risks in perspective. Car accidents are also a common cause of death in children and adults, but we click our seatbelts and just try to drive safely. So if you get peace of mind from checking on your child’s breathing from an app, go ahead and do that. And if you sneak in to watch their chest rising and falling in the crib, that’s fine too.