The Secrets Of Highly Efficient Napping 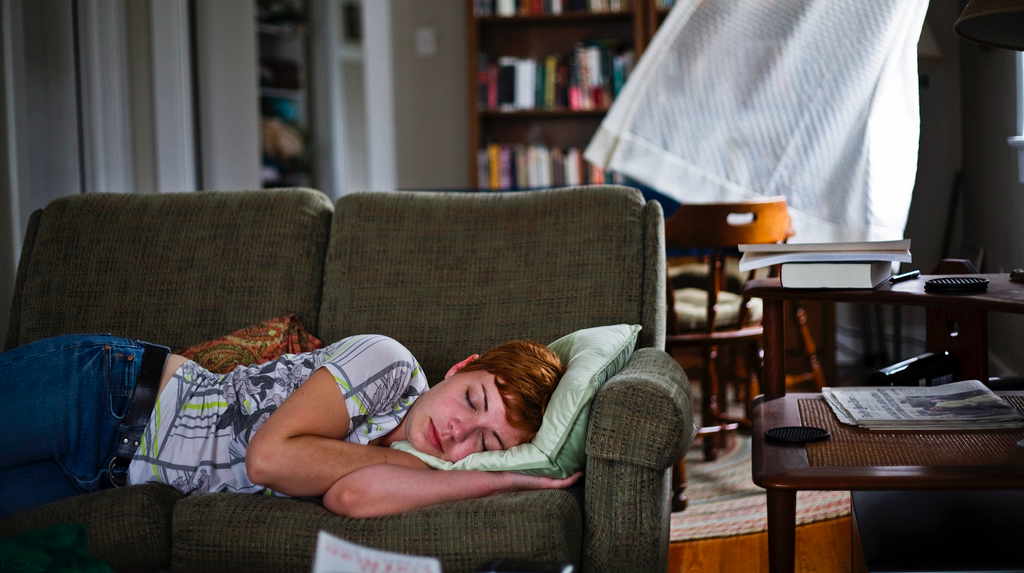 Before we begin, we need to determine if you're napping for the right reasons. For that, we need to nail down your napping style. There are three basic categories of nap, according to the US National Sleep Foundation. They are as follows:

The Planned Nap (AKA "The Preparatory Nap") — It's Saturday afternoon. You're going out tonight. The last thing you want is to start dozing off at 8:30pm, so what do you do? You take a nap. It's 2:17pm, and you're not even that sleepy, really. But a short snooze now means more party-happy fun-time later. This is the planned nap. The responsible nap. The leisurely pursuit of prudent, dedicated partiers everywhere.

The Habitual Nap — A habitual nap is a nap you make time for regularly. Daily, semi-weekly, whatever. The point is that it's scheduled. It's a habit. The nap typically lasts for a set amount of time and takes place around the same time of day. Remember pre-school? Remember nap time? Remember how awesome that was? You may not have appreciated it at the time, but I bet you do now. Daily, school-mandated nap time is the last time the vast majority of us practised habitual napping.

The Emergency Nap — Exactly what it sounds like. Unlike the planned nap or the habitual nap, which you frequently indulge in even when you're not feeling particularly sleepy, emergency naps are taken out of bleary-eyed, foggy-headed necessity. They are a hallmark symptom of poor sleep hygiene, and they can strike at any time. (Note: Early-afternoon sleepiness is, for many people, normal, and should not be confused with the beckon of an emergency nap. For more, see WHEN TO NAP, below.)

If you're an emergency napper, you might want to stop reading. There's a good chance you've got bigger issues to deal with. Emergency naps can be bad news, especially if you find yourself resorting to them regularly. The fact that emergency naps tend to choose when you take them, instead of the other way around, is a good indication that your body needs more sleep, in general.

If you remember one thing from this guide, let it be that naps are most beneficial when they're taken with intention. You choose the nap. The nap does not choose you. This is your mantra. When utilised in this way, naps can become a beneficial component of a healthy sleep schedule. Here's how to make the most of them.

There's no such thing as a single perfect time to take a nap. There is, however, a commonly recommended window. For most people, early afternoon is best. Biologically, humans are biphasic sleepers; we pack in most of our sleep at night, but most people's brains experience a dip in alertness somewhere between 1:00pm and 4:00pm.

The timing and duration of this window can vary from person to person, depending on their chronotype. If you regularly wake at 6:00am and are asleep by 9:00pm or 10:00pm, odds are your ideal nap time will fall on the earlier side of the window. If you're a night owl — hitting the hay past midnight and rising at 8:00am, 9:00am or later — your ideal nap window will probably be shifted more toward mid-afternoon.

A BRIEF ASIDE HERE REGARDING SHIFT WORK: If your job requires you to work odd hours of the day — the graveyard shift, for example — the early-afternoon nap window probably does not apply to you. The fact that your sleep-wake cycle is at odds with the rising and setting of the sun means you may need to nap more strategically. The National Sleep Foundation has some tips to help you nap more effectively.

Dialling in your ideal nap time will take some troubleshooting on your part. A good rule of thumb, when starting out, is to time your siesta for six to eight hours after waking. You can also try this napping wheel — designed by University of California's Sara Mednick, author of Take a Nap! Change Your Life.

HOW LONG TO NAP

This is the fun part — choosing what kind of nap you want to take. The results from a number of studies suggest that the benefits reaped from napping are correlated with the duration of the nap you take. Your mileage will almost certainly vary; many sleep studies have shown more sleep to be associated with greater benefits, while others have shown short naps to be every bit as effective as longer ones. The following list should be taken with a grain of salt, but it may help you predict what kind of return to expect on your investment.

The Ultra-Short Sleep Episode (six minutes): The Six Minute Nap sounds like something you'd hear hocked on a late-night infomercial, but research suggests a brief, six-minute nap, known as ultra-short sleep episode, can improve declarative memory, a type of long-term memory that aids our ability to recall facts and knowledge.

The Power Nap (10 to 20 minutes): The 20-minute power nap is the OG of naps. It's long enough to improve alertness, mood and concentration, but just short enough to stave off the unwanted effects of "sleep inertia", described by the Journal of the American Medical Association as "the state of impaired cognition, grogginess, and disorientation commonly experienced on awakening from sleep".

According to Joyce Walsleben, associate professor at the NYU School of Medicine's Sleep Disorder Center, and an internationally recognised authority in the field of sleep disorders, "twenty minutes keeps you from upsetting your schedules, getting into deeper sleep, and waking up groggy and refreshing you enough to continue safely."

The NASA Nap (25.8 minutes): In 1995, NASA researchers published the results of a study that examined the beneficial effects of in-flight naps on 747 pilots. Their findings, which appeared the Journal of Sleep Research, showed that pilots allotted a 40-minute nap window "demonstrated vigilance performance improvements from 16% in median reaction time to 34% in lapses compared to the No-Rest Group". The pilots who had napped also experienced dramatically fewer instances of micro-sleep* (34, versus 120 in the non-napping group) during the last 90 minutes of their test flights. On average, napping pilots fell asleep in 5.6 minutes and slept for 25.8 minutes.

The Groggy Nap (45 minutes): There's a reason NASA restricted its nap window to 40 minutes. One of the negative side effects of naps is sleep inertia, described above as the unpleasant groggy feeling one feels upon waking. There is some controversy over how long sleep inertia lasts, with duration ranging from one minute to four hours, depending on the study. Most researchers agree, however, that, barring instances of major sleep deprivation, sleep inertia rarely exceeds 30 minutes.

Another point of consensus regarding sleep inertia is that it tends to last longest when emerging from a deep, slow-wave sleep. I'm summarising here, but most people pass through four stages of sleep during their descent into the fifth stage of sleep, better known as rapid eye movement, or "REM", sleep. Stage one refers to the period during which you're actually falling asleep. Stage two, you're asleep, but you're sleeping lightly. Most sleepers hit this stage after about 20 minutes. Stages three and four, you're entering a progressively deeper stage of something called slow-wave sleep. Most people hit stage three around the 45 minute mark. Beyond stage four lies REM sleep, the dreaming stage. REM sleep usually kicks in between the 60 and 90 minute mark. The Boston Globe has a handy diagram depicting the stages of sleep.

Abrupt awakening during an episode of slow wave sleep (stage three or four) has been shown in numerous studies to produce more sleep inertia than emerging from stage one or two sleep, while emerging from REM sleep tends to result in intermediate grogginess. This is why most experts suggest avoiding naps between 40 and 60 minutes in length. Some experts, like Mednick, even recommend avoiding 30 minute naps, just to be safe. The most important thing to remember is this: If there's a chance you'll wake from your nap during an episode of slow wave sleep, make sure you give yourself a 30-minute window on the tail end of your nap. This should give you enough time to fully rejoin the waking life.

The Hour Power Nap (60 Minutes): By 60 minutes into their nap, most people are about two-thirds of the way through a standard sleep cycle. A 2008 study published in the Journal of Sleep Research asked test subjects to remember a list of 30 words, following either a 60 minute nap or an hour-long activity. The nappers fared significantly better.

The REM Nap (90 Minutes): One potential issue with an hour-long nap is you're still gambling with the possibility of waking during a slow wave sleep phase. If you do, you risk a significant period of sleep inertia. Why not just spend that time napping? If you can spare the extra minutes, many sleep experts recommend napping straight on through for a full hour and a half — approximately one full sleep cycle. Two studies conducted by Mednick and her colleagues, the results of which appear in Behavioural Brain Research and Proceedings of the National Academy of Sciences, suggest that longer naps that include a period of REM sleep confer a unique set of benefits, including increased creativity and improved emotional and procedural memory (valuable when learning a new skill) — while minimising the effects of sleep inertia.

What kind of nap you choose will depend on several variables. We've already mentioned a couple. How much time you have at your disposal in the first place is an obvious factor. How much time you'll need to recover from sleep inertia after your nap is another. A third thing that you'll definitely want to keep in mind is how your nap will affect your ability to fall asleep later that day. Even short bouts of sleep can interfere with your ability to fall asleep, when they happen later in the afternoon. Be sure to keep track of how your naps affect your later sleep periods, and adjust accordingly.

*The American Academy of Sleep Medicine defines a micro-sleep as an episode, lasting anywhere between a fraction of a second to half a minute, during which external stimuli are not perceived. Your most memorable encounters with micro-sleeps have probably been while trying in vain to stay awake during a movie or lecture, your head jerking around like some droopy-eyed bobble-head doll; but micro sleeps are most dangerous when we don't notice them at all. Have you ever driven through an intersection only to realise that you had no idea what colour the traffic light was? There's a chance you were experiencing a bout of micro-sleep.