The Cognitive Biases That Lead To Bad Money Decisions 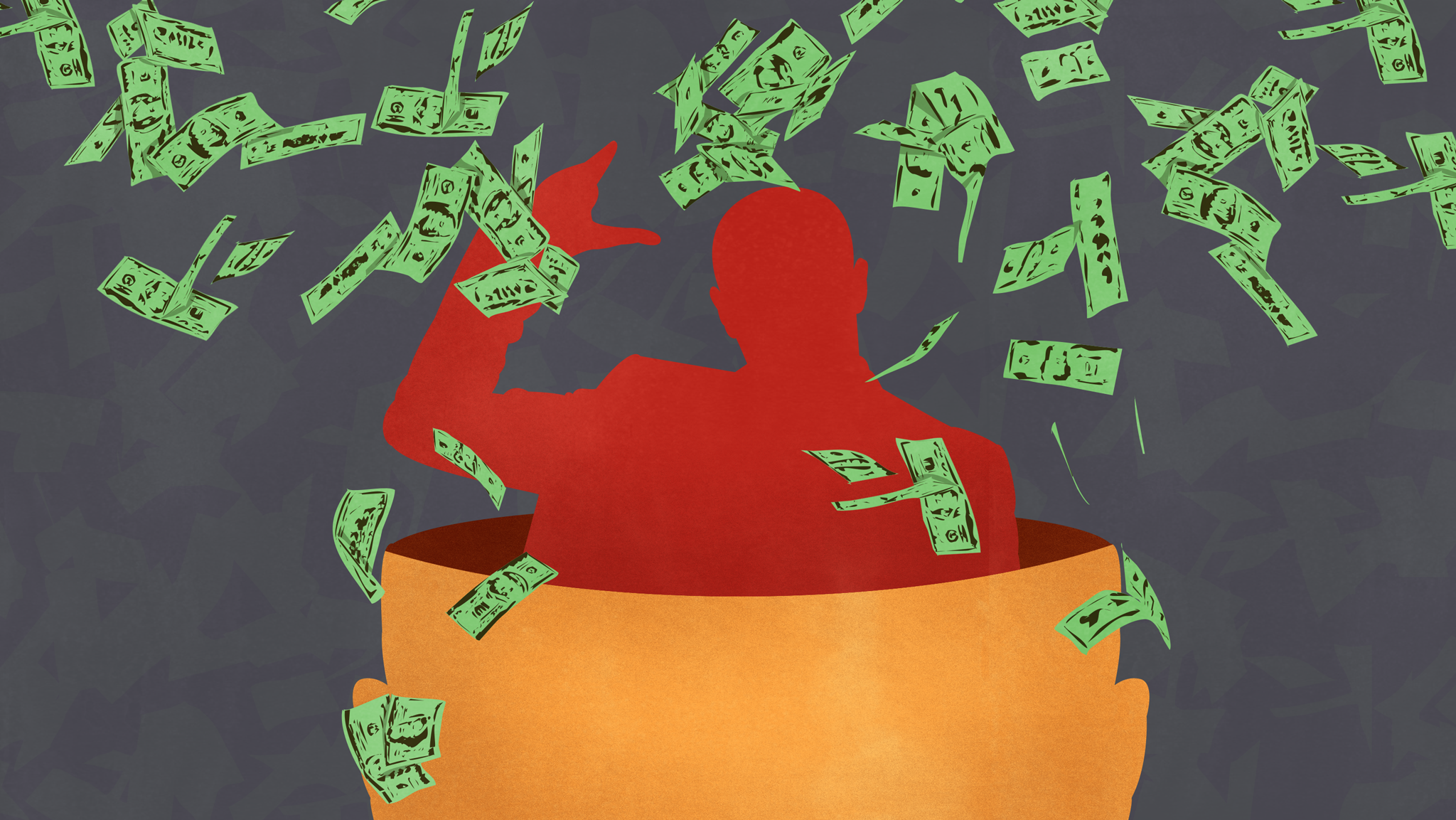 If managing money were as easy as crunching some numbers and following a spending plan, we'd all be awesome at it. Money isn't hard because of the maths, it's the psychology that trips us up. Our brains often work against us when it comes to financial decisions, but if you recognise these cognitive biases, you can overcome them.

If you've ever been in a bad relationship that lasted way too long, you've probably dealt with the sunk-cost fallacy. You invest in something, and however unpleasant it unfolds, you still hate to pull out because that would mean it was all for naught.

There are some subtle ways sunk-cost fallacy sneaks into your everyday thinking, and it often leads to bad shopping decisions. Here are a few of my own examples:

Spending can be a problem, but the sunk-cost fallacy creeps into a lot of major financial decisions, too. Maybe you stick with a college major you hate only to pay for a degree you never use. Maybe your failed business becomes a money pit, but instead of cutting your losses, you keep throwing cash at it. These are all expensive long-term mistakes. I use a two-step process to deal with it. First, I recognise my trigger. Then, I calculate how much more I'll pay if I keep going.

My trigger is a variation of this statement: "I've gotten this far, I might as well [insert bad decision here]." Whenever this thought pops into my head, I recognise it as the fallacy in action. Now, I follow up with, "How much more will I pay if I keep going?" The maths doesn't have to be exact, the point is to simply stop and think about any additional losses. For example, if I buy more paint, this mistake goes from $25 to $100. When you quantify it in that way, it puts your choice into perspective.

Really, though, simply recognising your trigger is the most helpful deterrent.

Buyer's remorse usually starts with denial, also known as post-purchase rationalization, a form of choice-supportive bias. It's the tendency to ignore other views in order to protect a decision you've already made.

This happened to me recently. I overspent on a wedding dress I couldn't afford, and while I eventually returned it, I initially convinced myself it was a good decision. It's a big, important day, I told myself. I'll have this dress forever. I didn't want to admit I'd blown my budget.

This rationalization is often called "Buyer's Stockholm Syndrome," and here's how one marketing website explains it:

Post purchase rationalisation, also known as buyer's Stockholm syndrome, is our brain's mechanism for reducing cognitive dissonance...the state of discomfort we experience when holding two or more contrasting beliefs at any one time...As if our own internal justifications weren't enough of a concern, we also seek out complementary evidence to back up our decisions, whilst ignoring facts that conflict with them, in a process known as confirmation bias.

You can probably list a few times you've been there with your own spending decisions, but this cognitive bias goes beyond shopping. It can be especially sneaky when it comes to complicated decisions — and financial decisions are often complicated.

For example, after college, I was intent on paying off my student loan, and I turned a blind eye to the 401(k) match my employer offered. I navigated my finances, budgeted for my debt payoff goal and committed to it. When a coworker mentioned I was leaving money on the table, I refused to see his point. I already made a decision, and according to my bias, it was the best decision. As a result, I did indeed leave "free" money on the table. It takes time to figure something out, so it's hard to admit you didn't get it right. It would have been smarter to hear my coworker out and review my options, but it was easier to ignore any other facts and tell myself I already made the best decision.

The remedy is simple: keep an open mind. Of course, that's much easier said than done, especially because we think we're more open-minded than we actually are. Ultimately, you just have to listen to other views and facts. As our own Thorin Klosowski put it, "if you're in a conversation, you have a better chance of actually hearing what the other side is saying if you shut up and listen."

It helps to have someone to hold you accountable, too. My parents and my fiance are good at giving me a reality check. When I told them about the dress, their surprised reaction snapped me out of my bias and forced me to come to terms with my buyer's remorse. Also, defensiveness might be a trigger. The bias often makes us immediately defensive of our decision when someone offers another point of view. If you can recognise that trigger, it's easy to recognise the bias.

You might have heard about the anchoring effect in terms of shopping. It's when you rely too heavily on the first piece of information you're exposed to, and you let that information rule subsequent decisions. You see a $US19 ($26) cheeseburger featured on the restaurant menu, and you think "$US19 ($26) for a cheeseburger? Hell no!" but then a $US14 ($19) cheeseburger suddenly seems reasonable.

Advertisers obviously take advantage of this phenomenon when they sell you stuff, but anchoring bias comes into play when you negotiate, too. Let's say you interview for a job, and they tell you the starting salary is $US35,000 ($48,334), which is much less than you expected. That figure becomes your anchor, though, and instead of counter-offering a higher amount, you lower your rate to match that anchor. As a result, you miss out on your earning potential.

In this way, not only does anchoring influence how much you spend, but it can also affect how much you earn. Beyond simply recognising it, the best way to overcome it is to do your own research. If you buy a car and the dealer throws out a crazy number on a different vehicle, he's trying to anchor you, but it shouldn't matter because you've researched the value of that car and you already know what to expect.

The same goes for your salary. If you research your industry, job role, and potential company, you should know what to realistically expect, despite whatever figure is thrown at you.

After college, I wanted to buy a new car: put down some cash, then pay it off in five years at 5% interest. My dad asked, "Why not just save up a little longer and buy a used car in good condition? That way you don't go into debt." I replied, "Everyone goes into debt to buy a car, though. That's just what people do." That's the bandwagon effect in action.

Instead of making well-rounded, researched decisions that might benefit us more, the bandwagon effect makes us simply do what we generally accept as the norm. It's part of the reason for the housing crisis. For years, it was the norm to get approved for a certain mortgage amount, buy a house for roughly that amount, then spend years paying it off. Letting the bank decide how much house you could really afford was normal, so everyone kept doing it and as a result bought homes that were way beyond their budget.

I did something similar with my retirement savings. For years, I only saved the bare minimum, and justified it with, "None of my friends are saving anything, though." Obviously, my friends have nothing to do with my retirement, but that's how the bandwagon effect works.

It's not always a bad decision to follow the crowd. In some cases, paying off a car might make sense (some of our savvy readers have pointed out that interest rates are so low, they invest their money instead). Overcoming the bandwagon effect doesn't mean making the opposite, unconventional decision. It just means you do the research, then make the best decision, regardless of what everyone else is doing.

When you're faced with any financial matter, do the maths, research all the different scenarios, then do what works for you.

The status quo bias is the tendency to favour decisions that don't change your life or your perspective very much. And it can work against you when it comes to your finances. For example:

We usually prefer the status quo because it's comfortable. It's hard to muster up the willpower to completely change your life. That's a tall order. If you take your milestones one step at a time, though, and make the overall change gradual, you can trick your mind into ditching the status quo bias.

This is why many experts say you should leave some room in your budget for splurges. Or, if you're going to deflate your lifestyle, cut back one area at a time — restaurants one month, gadgets the next, and so on. It might also help to incorporate a "personal finance day" into your schedule. That's an easy enough first step, and you devote time for other small steps, like lowering your mobile phone bill or shopping for a new bank account.

Biases aren't always a bad thing. Let's say you have a safe, "set and forget" investment portfolio, and a crazy investor comes along and wants you to give it all up and invest in his new fund instead. Status quo bias or even choice-supportive bias can save you from an impulsive, expensive change in that moment. However, it's probably better to hear the investor out, then reject the idea based on your own well-rounded knowledge and research. Typically, biases are blind spots, and while blind spots can occasionally work in your favour, they usually do more harm than good.