If you’re an outdoors adventurer, DIY-er, PC builder, or just like to be prepared for anything, you need a good multitool. The Leatherman Wave and SOG PowerLock are both reliable, sturdy, well-built and popular choices, but if you could only have one, let’s decide which deserves to live in your carry-all. 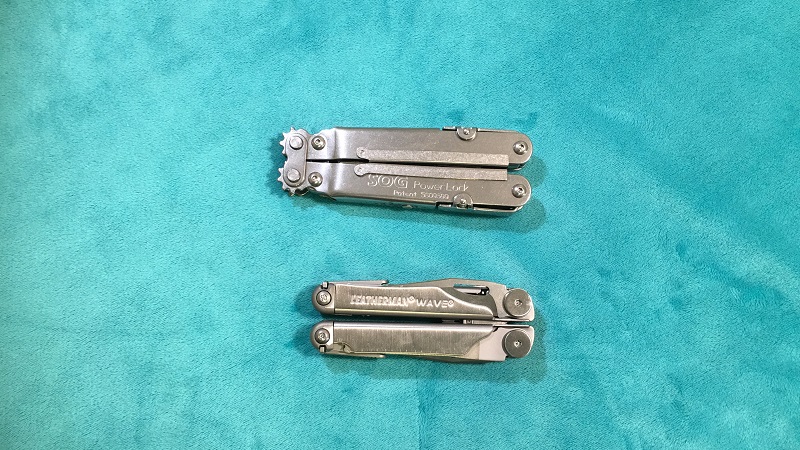 Leatherman and SOG are big names in specialty knives and tools, and they have both been making them since the ’80s. The original Leatherman tool, created by Timothy S. Leatherman, was inspired by his desire to build a “Boy Scout knife with pliers.” SOG’s founder, Spencer Frazer, took his inspiration from a unique combat knife carried by US Special Ops in the Vietnam War, and SOG is still the knife of choice for Navy SEALs today. The Leatherman Wave and SOG PowerLock are the consumer-focused, mid-range models of each company’s multitool, so let’s see how they stack up: 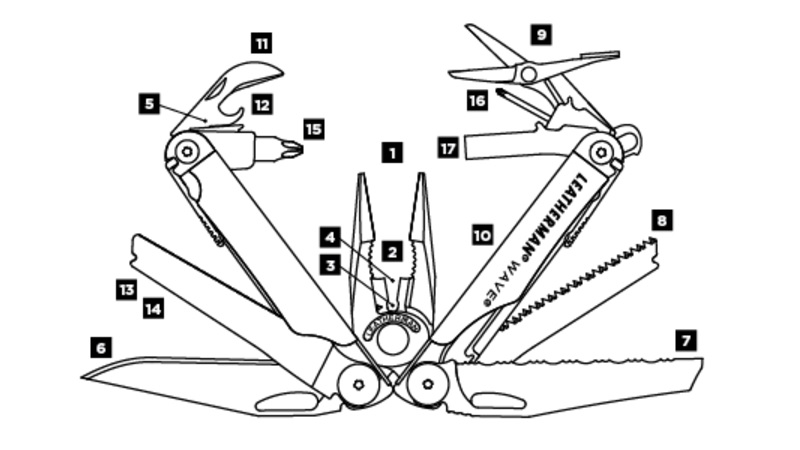 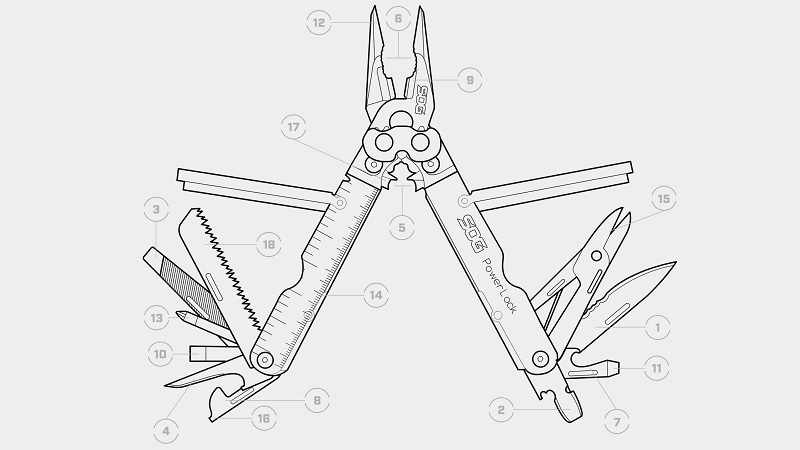 On the most basic level, both of these tools perform a lot of the same tasks. There are a few differences, though. The SOG PowerLock has wire and blasting cap crimpers and an awl that the Leatherman doesn’t, and the Leatherman Wave has a smaller bit driver, a wire stripper (more on that later), and an extra blade that the SOG doesn’t. (The PowerLock combines the normal blade and serrated blade into one combo blade.)

Functionality and Accessing the Tools 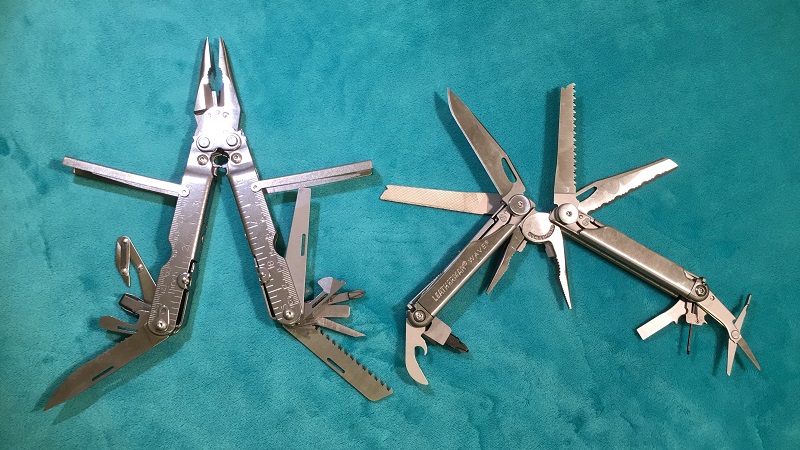 The Wave and the PowerLock may have a lot of the same tools, but the way you get to those tools is different. The Wave lets you access the standard knife blade, serrated knife blade, file, and wood saw without you having to open the multitool up. You can whip out your Wave and access those tools instantly, as if it were a pocket knife. The PowerLock, however, requires you to open up the tool to “plier mode,” lift a metal wing grip on the side, and then access your tool. Those two extra steps aren’t a total dealbreaker, but it does hamper the PowerLock’s ability to be a pocket knife replacement — and that’s usually one of the perks of having a multitool.

Fortunately, the PowerLock makes up for it with its proprietary gear-driven, Compound Leverage system that lets you flip open the tool with a flick of the wrist. You can access the blades on the Wave with one hand, but opening the multitool up to use the pliers or access the other tools definitely requires two hands. In fact, I found the Wave to be kind of stubborn to open up, especially when I want to use the pliers. Granted, I’m using a brand new Wave and my PowerLock, while barely used, is a little older. There may be a “breaking in” phase with the Wave that I’m not aware of. 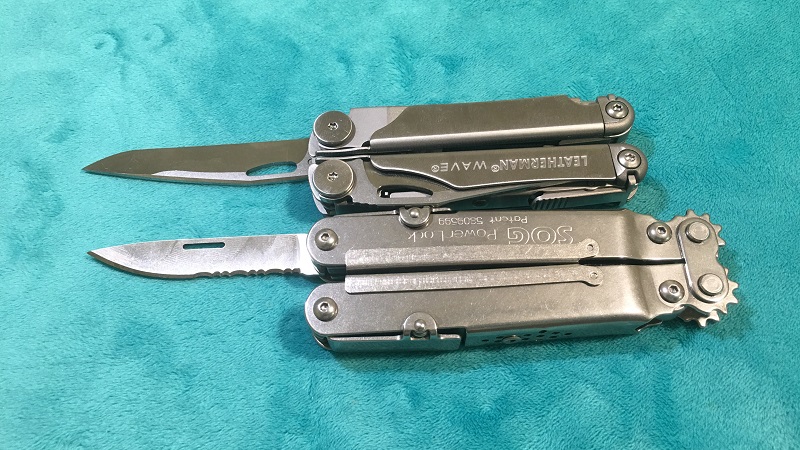 Just because both of these multitools have a lot of the same tricks doesn’t mean each tool does its job well. Here’s a quick rundown of how some of the most oft used tools compare to each other:

For the rest of the tools like files, screwdrivers, bottle openers, and can openers, they all work as advertised. Neither multitool does anything revolutionary with those tried and true staples. 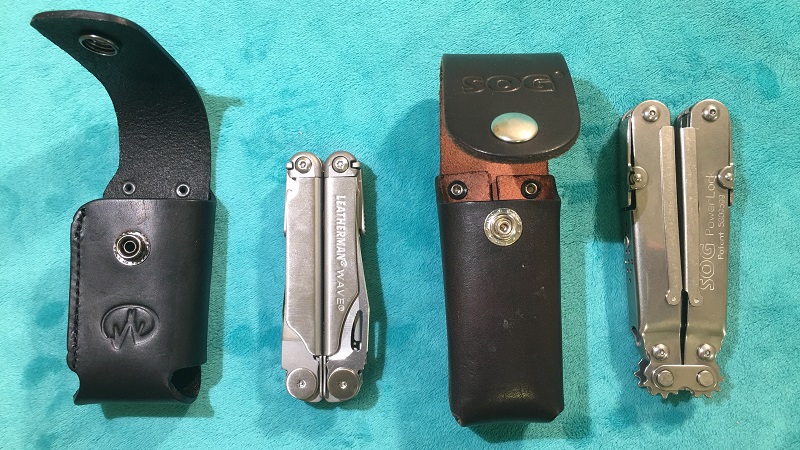 The Leatherman Wave comes with a no-questions-asked limited 25-year warranty. Basically, if something breaks and the cause isn’t misuse or abuse, Leatherman will fix it or replace it at no cost to you. The SOG PowerLock, on the other hand, comes with a lifetime warranty with similar no-abuse stipulations, but it doesn’t seem quite as lenient as Leatherman’s. You’re protected from manufacturer defects, but SOG’s warranty doesn’t cover rusted or stained blades, broken or bent knife tips, chipped knife blades, or worn tool components. SOG does offer a blade sharpening service, but it will cost you unless your multitool came with dull blades out of the box.

The Wave is for people who want a pocket knife plus tools, the PowerLock is for professionals, electricians, and handymen. There’s no completely wrong choice here — both tools basically put Inspector Gadget in your pocket — but the Leatherman Wave is definitely the best all-around option for the everyman. The decision ultimately came down to functionality. Being able to access the knife blades without opening up the multitool is killer, and makes the Wave feel like a better version of the classic Swiss Army Knife. This is coming from someone who personally prefers SOG overall. So, for most of you, I recommend the Wave.

That said, the PowerLock does a few things way better than the Wave. If you’re doing electrical work, the pliers, wire cutters and clamps make the PowerLock a no-brainer when compared to the Wave, especially if you get the wire stripper add-on. Did I mention the pliers are way better? I know I did, but seriously guys — kickass pliers. For those of you who need a multitool for actual work work, I recommend the PowerLock. Plus, PowerLocks will usually cost a little less than Waves. So, depending on what you’re after, you might actually be able to get more tool for less.