It's OK To Cook Acidic Dishes In Cast Iron (And Other Cast Iron Myths, Debunked) 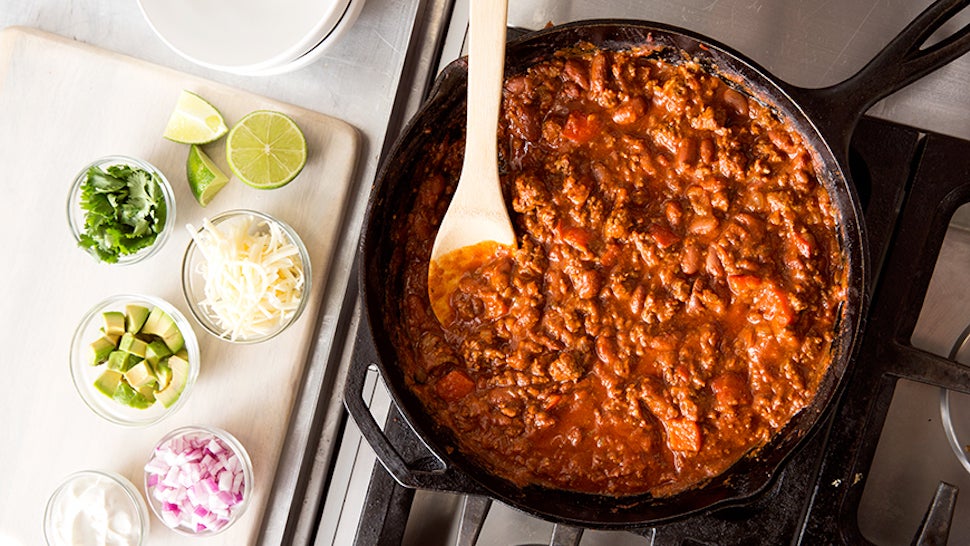 You've probably heard that it's not a good idea to cook acidic foods like tomato sauces, wine sauces or chillies in cast iron because the iron could leach into the food and add a bitter, metallic taste. Well, America's Test Kitchen put that theory (and some others) to the test, and the bottom line? It's fine. Photo by America's Test Kitchen.

First of all, it's absolutely true that when you cook acidic ingredients in cast iron for extended periods of time, trace amounts of iron molecules from the metal can get into your food. The good news though is that first, it's not bad for you at all, and second, you won't taste it. In fact, America's Test Kitchen says that it won't even be noticeable unless you're cooking for a long time. To test the theory, they simmered a highly acidic tomato sauce over medium heat in a cast iron skillet and checked every 15 minutes for off flavours and any damage the sauce may have caused to the pan:

In the end, our tasters could detect metallic flavours in the tomato sauce only after it had simmered for a full 30 minutes. So, while you can definitely cook with acidic ingredients in your cast-iron skillet, you have to be careful. First, make sure your pan is well seasoned; seasoning keeps the acid from interacting with the iron — to a point. An acidic sauce can afford a brief stay in a well-seasoned pan with no dire consequences. You should also be careful to remove acidic dishes from the skillet after they finish cooking; don't let them sit too long in the warm skillet and transfer any leftovers to an airtight container. (These rules do not apply to enameled cast-iron skillets; the enameled coating makes it safe to cook acidic ingredients for any length of time.)

So it's OK — you just need to be careful about how long you cook your sauce, and how long you let the sauce stay in the pan. For less acidic sauces than the test tomato sauce, you could get away with longer simmers without noticing any odd flavours or impact to the pan itself, which is great news if you want to make something like Shakshouka, which traditionally uses cast iron (and is delicious).

ATK also tested out some other cast iron cooking myths, like the notion that a rusted cast iron skillet is a ruined one (spoiler: It's not, but it may take some work to bring back to life), and the old adage that cast iron cooks evenly, which is why it's so great (actually, cast iron is a poor conductor and can heat very unevenly, so a pre-heat in the oven is necessary if you want a quick, even sear on something before adding other ingredients). Hit the link below to read the whole piece.