How To Choose Your First Weightlifting Belt 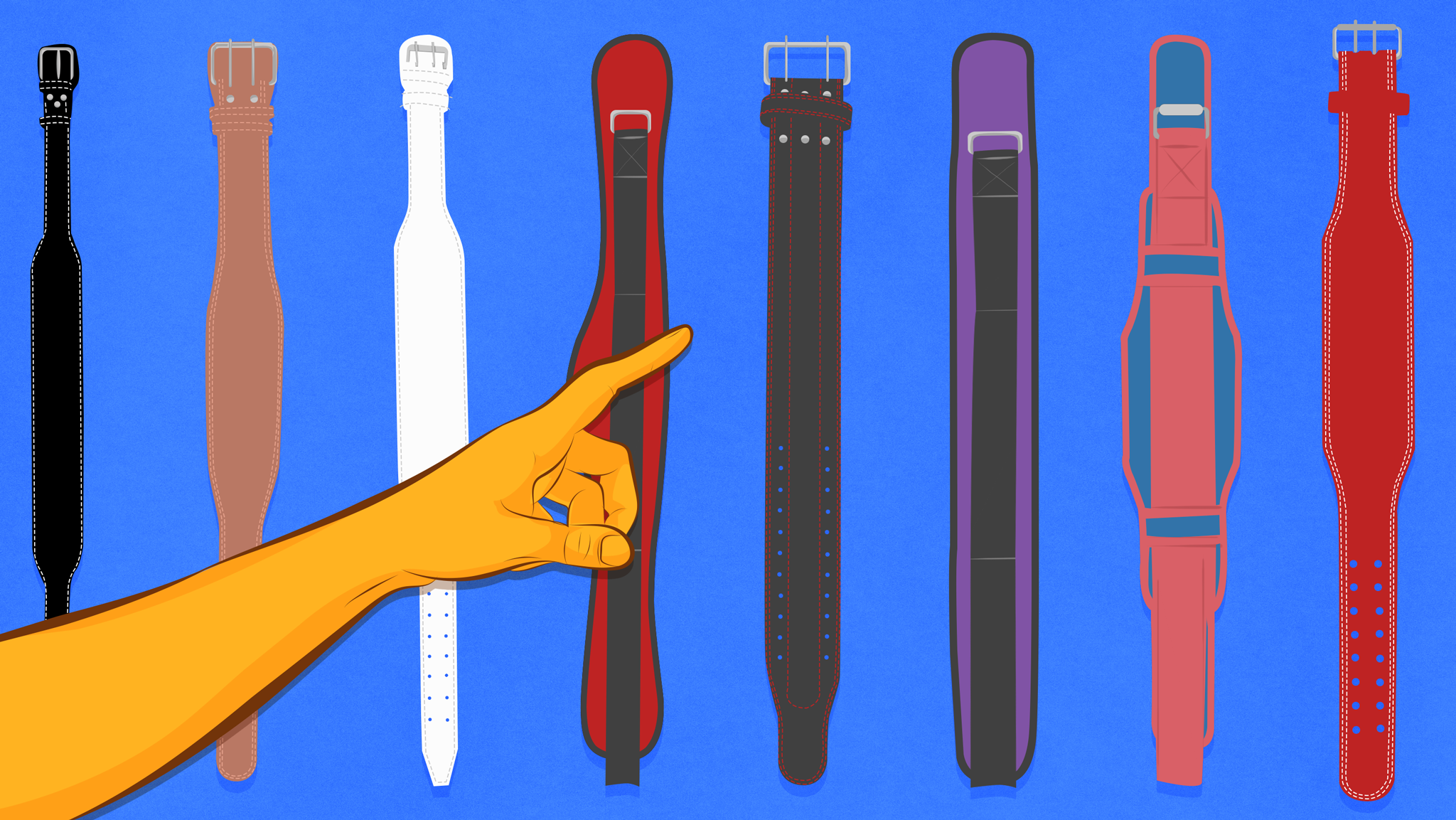 Shopping for a weightlifting belt is like shopping for a running shoe: you need to have an idea of what you need, and try different ones for fit, comfort, and functionality. There are a lot of variables to think about in your first belt, so let's help you sort out what's what.

We've already discussed the benefits of weightlifting belts, so we'll get right to your options in this post. Most weightlifting belts will set you back $US50 ($68) to over $US100 ($136), so it's not a trivial investment. On the bright side, if you choose well and take care of it, it will last you ages.

At first, choosing a belt will feel overwhelming, but take heart: the kind of lifting exercises that you generally do (powerlifting, Olympic lifting, or bodybuilding) helps narrow your choices. Then the rest is just personal preference.

You'll find two main kinds of belts: powerlifting belts and weightlifting belts. Check out the video to get an idea of the visual differences.

Generally speaking, powerlifting belts are for people who frequently lift heavy in squats and deadlifts, aka powerlifting movements. Weightlifting belts are for people who do Olympic lifting (snatches and clean and jerks), CrossFit, and bodybuilding. Going with a belt that matches your style of training is the quickest way to pare down your choices.

The most obvious feature that differentiates the two kinds of belts is their width. A powerlifting belt runs approximately 10cm wide and is consistent all around, while a weightlifting belt typically features a 10cm-width for the back support part, but dramatically tapers off in the front. Some weightlifting belts may also have extra padding in the back, but as I've pointed out, the padding won't do much for back protection.

Those different widths are intentional design choices. For powerlifting, you'd want a greater surface area in the front for your abs to "push against" when you breathe into your stomach. When you do, you create greater intra-abdominal pressure to protect your spine under such heavy loads. On the other hand, if your belt is too wide in the front for weightlifting movements, it might interfere with movement.

If you like to dabble in a little bit of every kind of strength training, there's a belt for you too. Some manufacturers have belts that will prepare you for whatever type of lifting you choose to do. Best Belt's Athlete Powerlifting Belt ($US109.99 ($149)) is one example.

Aside from different widths, many lifting belts should come in 10mm or 13mm varieties. Thickness provides that stiffness to keep your spine from bending like a Slinky. The thicker the belt, the stiffer and more durable it will be, and the more likely it will stay put when you lift.

For first-time belt-buyers, the struggle to choose between 10 and 13 is real: 13mm offers sturdier support, but it can be really, really uncomfortable and overkill for a majority of lifters. It's usually reserved for folks who plan on moving some otherworldly weight. Most lifters, even the really strong ones, typically lift with a 10. If you're not convinced, give the 13 a whirl. You'll know when it's too thick because you'll likely have a hard time getting into proper lifting positions.

As an aside, if you plan on entering a powerlifting competition, your belt must be no wider than 10cm anywhere and no thicker than 13mm to meet International Powerlifting Federation regulation rules. Some suggestions: Inzer's Forever 10mm belt ($US89.95 ($194)), Titan's Brahma Belt ($US109.99 (around $220)), or this cheaper option by Ader (price varies by size).

Choose Belt Material Based on Your Lifting Style

Belts are made from leather, suede, or velcro, and really it's going to come down to personal preference. For powerlifting, most lifters that I talked to suggest leather. Leather belts tend to better constructed, more durable, and stiffer. A suede belt like Best Belt's Athlete belt will feel softer, won't shift around as much, and is perhaps more comfortable. On the other hand, many belts like Inzer's Forever belt combine the ruggedness of leather and the non-slip material of suede to give you the best of both worlds.

For Olympic lifting, leather and suede options also work, but you could go for a velcro-style belt.

Test Your Belt For Fit and Comfort

You never know if the Best Belt in the World will work for you without at least wearing it and lifting in it (or at least simulating the exercises).

To find out how big of a belt you need, you'll need to measure your waist circumference at the navel. Grab a tape measure and measure firmly, making sure the tape goes level around your torso. And be honest: don't call it 81cm when it's actually 34.

Also, you want to try on belts of varying widths. There are 10cm wide belts, but you can also find belts that are 3 inches or 2.5 inches wide. For most people, 10cm is that sweet-spot width between the rib cage and hip bone.

When you try on a belt, start off by having your belt go around your belly button, not your hips. You definitely want to avoid having the edge of your belt painfully pinching you while you're trying to hoist a scary amount of weight, or any part of your belt catching the bar during the movement. If that's the case, you might like a belt that's slightly tapered in the front.

Weightlifting belts are secured either with a single prong or double prongs, or a lever. The video above by YouTube channel A7 Intl shows you the pros and cons of each.

From talking to other lifters and reading the opinions of many more, the consensus seems to be to kill double prongs with fire. Most people prefer single-prong belts like elitefts' P2 Power Belt ($US115 ($156)) because they're less annoying to open or close, and just as secure as double-prong belts. With double prongs, you just have one more step to fuss over, which can divert focus away from your lift in order to tighten up the thing that's supposed to help you lift.

A lever-style can be handy because it cuts down the number of steps. Once you set your desired tightness, you just put the belt on and click the belt into place. It's great if you use the exact same tightness each and every time for any lift. You can readjust the tightness, but you'll need to have tools ready and spend some time to do it manually.

You'll either hate or love the lever belts, and if you want to give it a try, many have recommended Inzer's Forever Lever belt here for $US90 ($194).

How to Properly Wear Your New Weightlifting Belt

This video by Alan Thrall, a strongman coach and owner of Untamed Strength, offers some good tips on choosing and wearing a belt. Be warned: Weightlifting belts are going to be uncomfortable for a while, especially as you're learning to get used to one.

Once you get comfortable with your belt, you can start to experiment with changing the belt's position on your torso. For instance, Omar Isuf, a strength and performance coach, told me that experienced belt-users tend to wear their belts higher on their torso during a deadlift than they do during a squat. More specifically, in a deadlift you might find wearing it around the mid stomach to be more comfortable. During a squat, you might like it above the iliac crest.

You also want your belt to be tight enough to stay in the same place while you lift, but not so tight that you're cutting off full, deep breaths or circulation. The clothes you wear and even down to how much water you're holding could influence how tightly you have to pull your belt. If you're just learning, it's ok to wear it a tad looser until you learn to love its not-so-tender embrace. Finally, keep in mind that your new belt needs to be broken in the same way a shoe does.

For beginners, a belt that's thinner and less wide will typically be more comfortable and usable in the short-term. At the same time, you want to think about getting immediate benefits, sure, but you also want to keep your long-term goals in mind (do you want to keep getting stronger?). If you've been lifting for a while and will continue to do so, a 10 mm, single-prong belt is my suggestion. If you're unsure and don't want to invest, this beginner- and budget-friendly belt gets good reviews, and my reccomendation.