How Melatonin Helps You Sleep 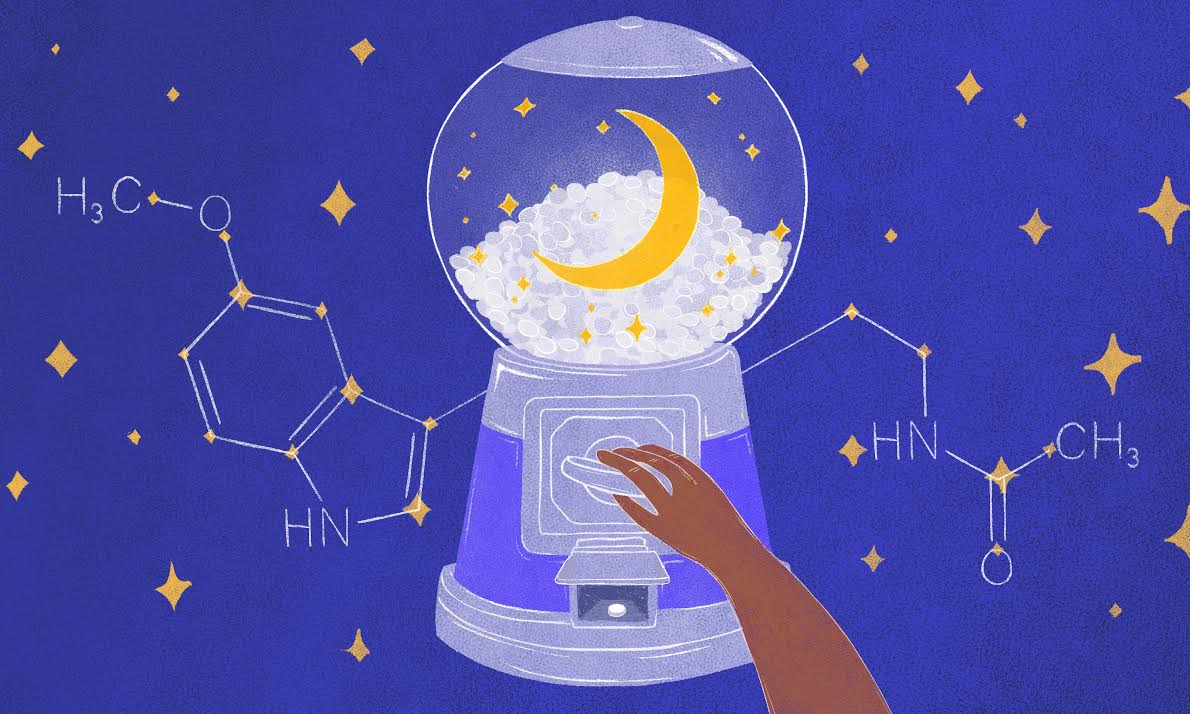 If you’re having trouble sleeping, melatonin is a popular and easy remedy. It’s effective for many people, doesn’t have any serious safety issues and is available as pills or gummies for only a few cents a dose. It’s also misunderstood, though: melatonin is not a traditional sleeping pill.

How Melatonin, the “Darkness Hormone”, Works

Sleep signals are complex, but the important thing to know about melatonin is that it doesn’t tell the body to sleep; it tells the body that it’s nighttime. That may sound like a subtle difference, but it means melatonin won’t knock you out like a sleeping pill, and it can’t cure every type of sleep problem — just certain ones that stem from an out-of-whack body clock.

Our actions throughout the day, like when we go to sleep and when we eat, are partly programmed by a system of brain signals and hormones that make up our body’s clock. Melatonin helps to keep the body clock synced with the earth’s cycles of night and day through the convenient sunlight detectors in the front of your face. You know, your eyeballs.

Some of the light that enters our eyes helps to signal a part of the brain called the suprachiasmatic nucleus (SCN). At nighttime, little to no light comes in, and the SCN tells the nearby pineal gland to make melatonin, which then circulates through our blood.

Melatonin supplements add to the amount of melatonin circulating in our blood. Even small doses from pills, around 0.5mg, can boost the amount circulating in our body. Most melatonin pills are between 0.5 and 5mg. Higher amounts aren’t necessary; the signal doesn’t seem to depend on dose. (Imagine shouting to someone that it’s nighttime, versus telling them in a quiet voice. They will get the message either way.)

What Melatonin Supplements Can (and Can’t) Do

For some people, some of the time, melatonin has a hypnotic (put you to sleep right away) effect. But its effect on shifting the body clock is much stronger and more reliable. That means that sometimes it can do the opposite of what you want. Take melatonin in the morning, for example, and you might end up staying awake later — because you just told your poor confused brain that day is night. Children’s sleep specialist Dr Craig Canapari, of the Yale Pediatric Sleep Center, made the video above to show how the effects of melatonin change depending on when you take it.

This effect may be partly responsible for some of the confusion over how well melatonin works. Vox recently reported on several reviews of melatonin studies. One doctor described melatonin’s effect on insomnia as positive but weak; another said melatonin is “a lousy sleeping pill”.

These different studies may be hiding a real effect that only applies to people with certain body clock issues. Dr Nitun Verma, a Stanford-trained sleep specialist and longtime friend of Lifehacker, says that “it’s difficult to say what per cent of people will benefit from melatonin because some research studies look at a population who only have insomnia, or delayed sleep phase syndrome (DSPS), or a combination”.

Delayed sleep phase syndrome is common in young adults and people in the tech industry, Dr Verma says, and people with DSPS are more likely to benefit from melatonin than people who just have insomnia.

Besides DSPS, melatonin may help with other circadian rhythm disruptions. A Cochrane review found that melatonin is “remarkably effective” for travellers with jet lag, especially people travelling east. Another Cochrane review looked at drugs for shift workers, and found that while melatonin didn’t work very well, it was still better than other types of sleeping pills.

Should You Take Melatonin?

Even if your problem is one that melatonin can help with, melatonin isn’t the only answer. Exposing your eyeballs to sunlight and darkness at appropriate times also helps to sync up your hormones and retrain your brain. That’s why screens at bedtime can screw up your body clock: your brain gets the “daytime” signal when it’s really night. On the flip side, it’s not smart to take melatonin and then watch movies on your iPad while you wait to fall asleep.

Don’t forget to consider other reasons why you might be having trouble sleeping. Do you have a sensible sleep schedule and a bedtime routine that gets you in the mood to sleep? Make sure to cover those bases, too.

Insomnia can also be a symptom of other medical or mental problems, including depression, anxiety and sleep apnoea. If insomnia is interfering with your life, and especially if you have other medical or mental issues that could be related, talk to a professional. Your regular doctor is a good place to start, or you can find a local sleep specialist. They can help figure out if there’s an underlying cause for your insomnia, and they may be able to recommend more comprehensive support.

Every drug has its risks, and thankfully melatonin doesn’t have very serious ones — at least as far as our current studies have shown. An Australian paediatrician warned last year that we shouldn’t assume melatonin is safe for children, since its long term effects haven’t been studied very well. One concern is that long-term use might affect the hormones involved in puberty. Melatonin has effects throughout the body, and Dr Verma points out that it may also interfere with fertility, so he doesn’t recommend it for people who are trying to conceive.

Melatonin can also interfere with how your body processes other drugs, including birth control. As always, it’s wisest to discuss your situation with your doctor.

If you’d like to try melatonin, you can buy it as a dietary supplement in Australia, the United States and Canada. It’s considered a prescription drug in many other places, including much of Europe. Supplements are always a bit of a gamble, so keep that in mind.

I asked a few people who use melatonin regularly how they would describe the feeling. All agreed that its effect is more gentle than something like a drowsy-making allergy medicine. “More like a warm glass of milk than being knocked out with a blunt object,” was a typical description. All agreed that it didn’t make them sleepy in the morning, either. One complaint I heard a few times was that it gave people extremely vivid dreams. It’s not clear if crazy dreams are a side effect of melatonin, or just something that happens when you catch up on sleep.

So melatonin is a real drug that may help you sleep — depending on exactly why you’re not sleeping. Don’t expect miracles, and do make sure to take it at the right time: ideally five hours before your intended bedtime. Because we don’t know a whole lot about potential risks, most sources I consulted for this article say to use the lowest dose that works (try 0.5mg to start) and if you intend to use it long term, talk to your doctor.