How Being Tired Affects Your Thinking And Performance

Something I notice every time I get really tired is that I become really clumsy. When I find I’ve dropped several cups, bumped my knee on a desk and opened a door into my face in the space of a couple of hours, that’s usually a sign that I’m overtired. This post originally appeared on the Crew blog.

Being clumsy is pretty annoying, and usually enough to make me realise I need to toddle off to bed. But there are lots of other ways being tired affects us that aren’t as obvious. Understanding them doesn’t necessarily mean we can overcome them, but we can be more aware of the effects and — more importantly — try to avoid lacking sleep at all.

When it comes to making decisions, you might think being tired is a bad state to be in — especially for important choices. It could depend on what the decision is, though.

If you’re making a decision about your health, or spending money, you might see this trend as a good thing. Try going shopping when you’re tired and see if you’re less likely to make impulse purchases — that could be an interesting experiment.

On the other hand, you’re probably less likely to take a chance on meeting someone new or trying a new experience when you’re tired. The studies I mentioned above found that participants felt more vulnerable to risks when they were tired, which lead to more cautious choices. This could be an issue if you’re attending a networking event or you’re travelling and you want to be able to take small risks to get more out of the experience.

Knowing how being tired can affect your choices means you can prepare in advance by taking a nap before a social event or managing your schedule while travelling to make sure you get plenty of sleep.

When We’re Tired We Fall Back on Old Habits

When I was researching my recent post about junk food cravings, I was surprised to find out that we don’t necessarily make unhealthy food choices when we’re tired. In fact, we actually fall back on whatever our normal habits are. So for me, that equals eating unhealthy food that’s quick and easy, but for someone who’s put in the effort to build up healthy eating habits, that’s what they will fall back on when they’re tired.

This can work in pretty much all areas of your life. For instance, if you have a really solid habit of going for a short walk before bed every night, being tired will mean you fall into that habit more easily, rather than resisting the effort. It’s actually more effort to resist your habitual actions, even if they’re healthy ones.

That’s pretty good news. It means if you can be bothered to put in the effort of building up strong, healthy habits, you can relax in the knowledge that being tired shouldn’t make it harder to keep them up.

As you start building up these habits, those tired moments will inevitably be a struggle as your old habits want to kick in. One trick I came across to help with this is to prepare a list to have ready for these moments. Vlad Dolezal wrote on his blog about how he uses this method:

On my wall, I have a sheet of paper titled “Foods of Vladdyland”.

It tells me all the foods I like to cook regularly, and what ingredients they require.

This list can be a life saver when I’m feeling tired and don’t really know what I want to cook. I can simply glance at it, imagine each of the meals as I look over them, and when my body says “Yes! Let’s eat that!”, I know what to cook. No hard thinking required.

Vlad also has a list of work-related tasks he can do, sorted by how much energy they require:

Before I had this list, I would sometimes deflect to procrastination, because I couldn’t remember what else to work on.

This helps him to stay productive when it would be easier to procrastinate.

It’s not just our thinking that’s affected by being tired. Our bodies struggle to perform as well as they can without enough sleep, too.

Research has actually found that being tired means athletes perform at lower levels than they’re normally able to. Our reaction times and strength suffer from being tired, and we struggle to get as much out of our bodies. Several studies have found an improvement in sports performance after athletes get more sleep on a regular basis. The results have been consistent across swimming, tennis, basketball and football.

Our bodies also need sleep to recover properly from exercise or training. If we don’t sleep enough to let our muscles recover, they will perform worse the next day as well, and our potential for injury increases. So lack of sleep over time is even more dangerous as the effects start to compound.

A link has even been found between the lengths of professional sports careers and the amount of sleep players get. The chart below shows players from a baseball study against their “sleepiness score” (the higher the score, the more sleepy they felt). Each player in blue was still active three years after the study, while each player in white had become inactive or been demoted: 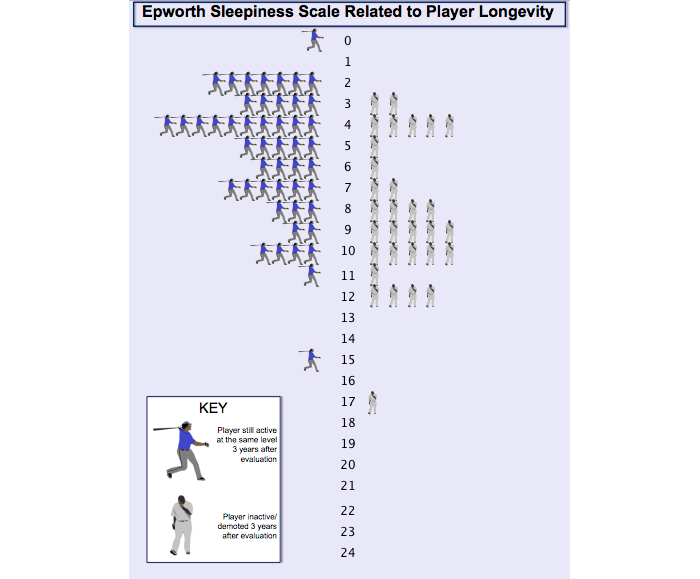 Since the cognitive benefits of sleep carry over to our physical performance, there are a whole lot of reasons to focus on getting more, higher quality sleep every night.