How to Offer Advice Without Making Someone Hate You

Get The Newest Version Of Windows Forever With Windows Insider 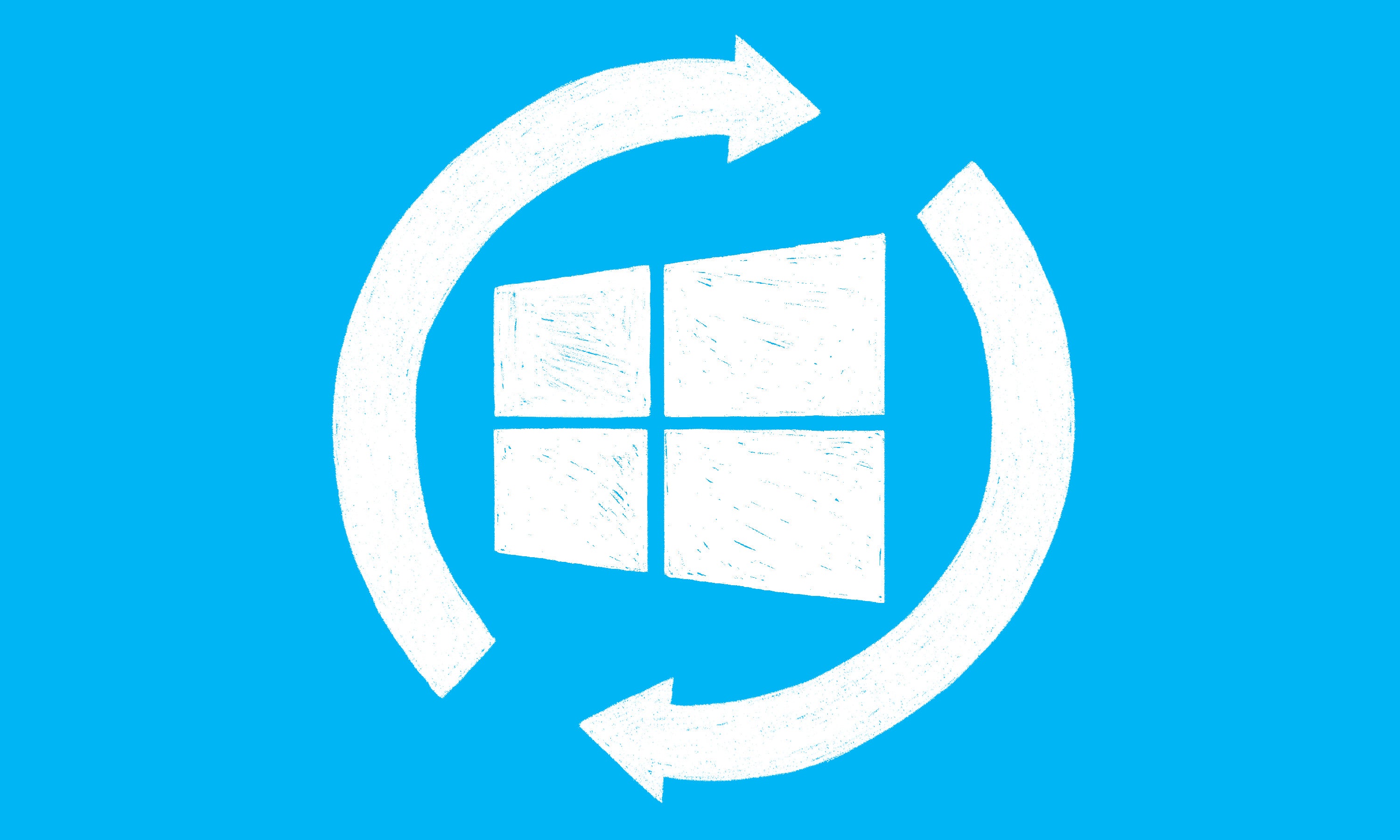 The Anniversary update to Windows 10 is rolling out later this winter, but you can try out all the new features like Bash and notifications from your Android phone right now with the Windows Insider program.


Stay On the Cutting Edge With Windows Insider 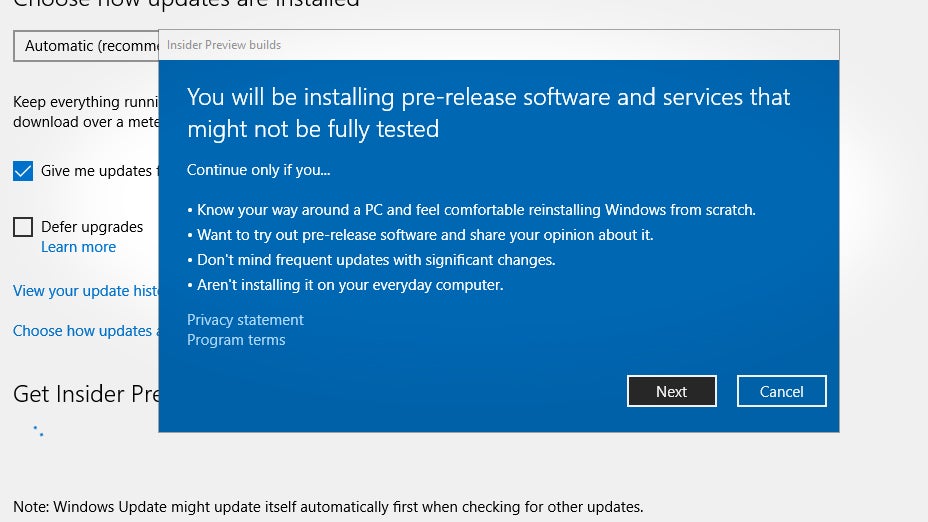 The Windows Insider program is designed to give adventurous users the chance to try out the newest version of Windows before anyone else does. For example, the Anniversary update brings a full Bash client, a smarter Cortana and a dark colour scheme. Insiders are the first to receive feature updates like these, but they also shoulder a lot of the risk of untested software (since you’re the ones testing it). However, with a few tweaks you can avoid most of those risks.

You’ll need to be running Windows 10 in order to enrol. Then follow these steps:

From this point on, you’ll be on the Insider channel and will be notified of new updates as they roll out. If you used the trick above to guarantee a Windows 10 licence even after July 29, then not only do you get Windows 10 for free, but you also get to check out any new features without paying a dime for upgrades. At least until Microsoft changes its policies.

What You Can Do As An Insider 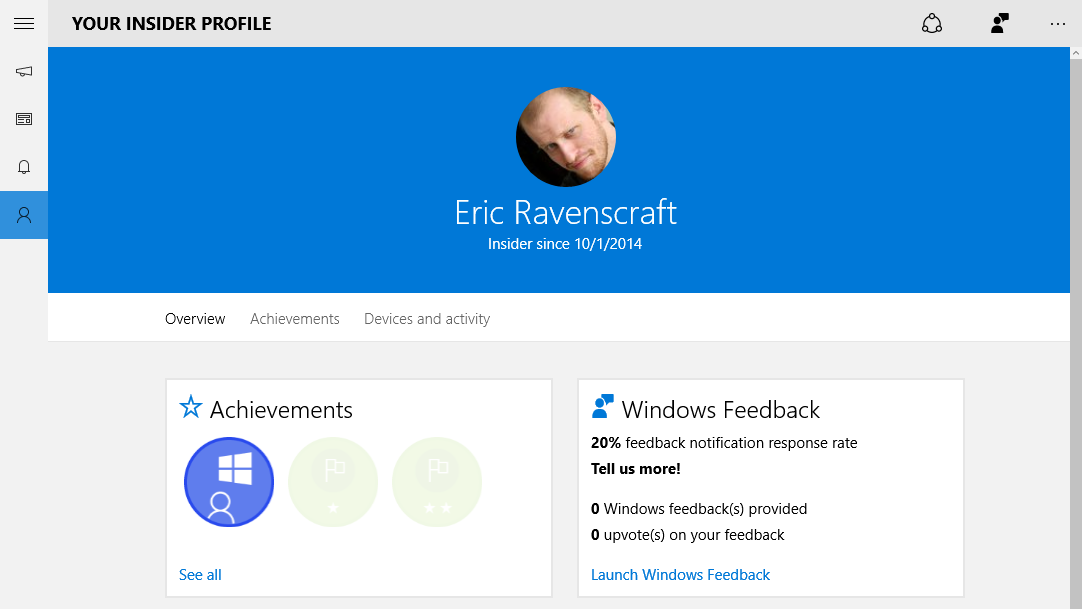 Being an Insider doesn’t just mean that you’re first on the list for free updates. Microsoft uses Insiders to get feedback on what’s working and what isn’t, and to tweak features before they’re released to the public. If you want to get involved in the feedback process, you’ll want to install the Insider Hub by following these steps:

If you don’t plan to actively contribute feedback, it’s safe to ignore this app most of the time, but it has a few useful purposes:

Of course, if you’d rather ignore the Insider features and use the program to live on the bleeding edge of Windows, you can do that. The worst you’ll get is a very rare nag that asks how you like a certain feature. Beyond that, the Insider builds work just like regular Windows. I’ve been using the preview builds for over a year and my computer hasn’t melted. If you really don’t want to pay for Windows and you don’t mind living on the edge a little, this method should give you free Windows for as long as Microsoft keeps the Insider Program going.

To become an Insider, you’ll need to have a copy of Windows 10 on your machine. Right now, you can still get Windows 10 for free, as long as you have a licence for Windows 7, 8 or 8.1. After July 29, the price will go up to $179. However, if you upgrade right now, you can “reserve” a licence that you can use again in the future, as How-To Geek points out. When you upgrade to Windows 10, your computer is given a “device entitlement” which is sort of like an invisible, hardware-specific activation key. This allows that hardware to upgrade again in the future. You can secure your entitlement one of two ways:

For now, you can still use Windows 10, even if you don’t pay for it. Unlike previous versions, Windows 10 doesn’t stop working entirely if you don’t activate it. You’ll just be nagged with a watermark, and a few personalisation features won’t work until you pay up. Switching to Insider builds may remove some of the nags, since each periodic update resets the clock on the nags Microsoft sends your way.

Adjust Your Settings As An Insider to Limit Your Risk 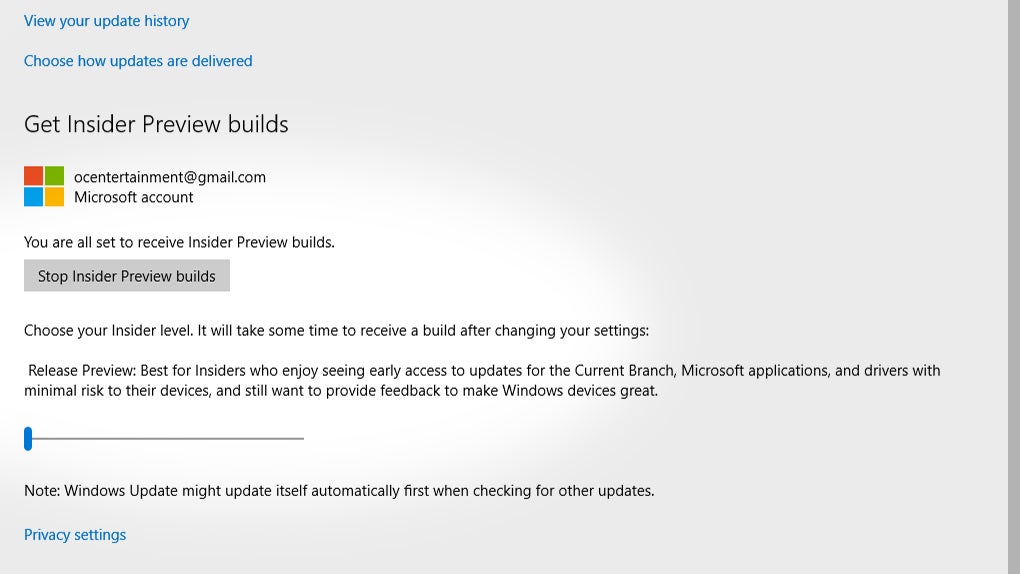 Microsoft doesn’t advise using Insider previews as a daily driver, but you can tweak a few settings in order to limit the risk to your machine.

There are three different levels of Insider builds, depending on how much risk you’re willing to take. The Fast level will give you the most bleeding edge, potentially broken updates Microsoft releases. The Slow level will take it easier, minimising risk but still giving you pretty early updates. Finally, the Release Preview level (which should be the default when you first sign up) is the safest update channel. These are the builds that are ready for final testing before going out to the public at large.

To tweak these settings, search for “Insider” from the Start menu and choose “Advanced Windows Update options”. At the bottom of the window that opens, adjust the Insider Level slider. We recommend staying on Release Preview if you’re planning to use this machine regularly.

You can also slow your update process down even further by deferring updates. This feature exists in Windows 10 Professional, Enterprise and Education, but Windows 10 Home users don’t normally have the option. Ironically, becoming an Insider lets you “defer upgrades for several months“. This is especially handy if you want to get into the Insider program without the risk.

You can find this feature in the same menu where you adjusted your Insider level. At the top of the window, enable the checkbox that says “Defer upgrades”. Unfortunately, you can’t determine how long upgrades are deferred (and security patches will continue to rollout no matter what), but it at least gives you a long time to make sure Microsoft fixes any critical, computer-breaking bugs.