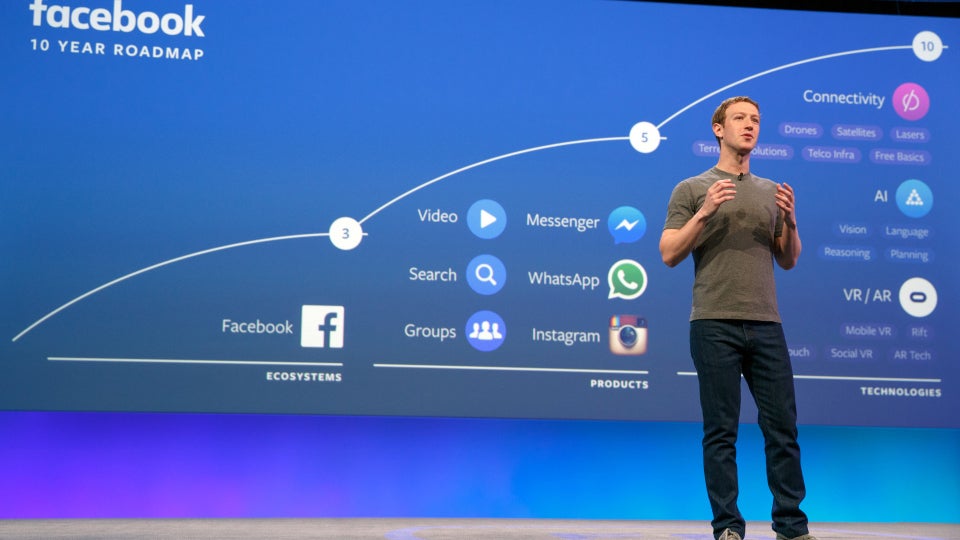 Facebook has enormous ambitions for its chat app, Messenger. So big, that it doesn’t even think of Messenger as an app. Facebook thinks of Messenger as a platform on which entire businesses will be built. Read on to find out why.

“We are one per cent finished, as we say at Facebook,” Julien Codorniou, Facebook’s director of platform partnerships, told Wired’s David Rowan. “One day, there will be companies built on Messenger, and we are at the beginning of that ecosystem.”

That was reported by Business Insider’s Jillian D’Onfro in October.

Last week, the company announced that it has more then 900 million people now using Messenger very month, and more than one billion messages being exchanged every month between people and business. Today, it has officially moved in on Slack’s turf introducing its new “send, receive” API which essentially is the interface for businesses to build their own customer experiences onto Messenger.

The news was announced at its F8 developer conference, where it has also announced that bots will now be available for Messenger, which will dramatically change customer service capabilities for businesses using the platform. Business Insider Australia spoke with Frerk-Malte Feller, the head of Messenger’s business initiatives at Facebook last week, ahead of the conference to find out more about the new functions now available on Messenger.

Messaging apps are taking over

“Messaging has become the number one way we interact,” said Feller, “however it’s less well-known that businesses have taken to messaging. It’s such a great experience in so many ways. When you message with people you have the instant communication that we so much enjoy between people, and that equally applies with businesses.

“What we want to give you is a place on people’s smartphones where you can have rich interactions that go far beyond text these days. People use photos, stickers, video calling. We see a huge opportunity for businesses to integrate their businesses prophesies into Messenger and use our platform to have much richer interactions.”

Over the past year Feller and his team have been working with businesses such as Hyatt, Wal Mart, Shopify and CNN, to explore the different ways businesses can integrate the platform into their business.

“This week we’re launching with KLM airline which sends your ticket confirmation in Messenger and lets you check in,” said Feller. “You can also call and Uber or Lyft in Messenger without needing to go into a separate app.

“These rich interactions that people have got used to in their private life, we’ve been able to build into Messenger. As we built that out over the last year we’re now ready to open that up as a platform.”

According to Feller, this is Messenger’s advantage over its competitors.

“The big distinction for Messenger is that it’s a consumer platform,” he said. “It’s a platform which is used by people in their every day life. Some other platforms are business to business communications side between employees, we’re not that.

“You’ve got 900 million people, pretty much in every continent, so you have this presence that you can’t get on Messenger that you really can’t get anywhere else.”

The other major drawcard, Feller said, is that the API also enables businesses to build autonomous bots with Messenger.

“Bots are a really big thing now,” he said. “We think of bots as something that is a bit different from what we have seen other people do.

“What’s important is that bots are not this kind geeky thing that requires people to learn programming languages to use them. They’re super simple and intuitive. So the same way you build the initial experiences with business, developers can build experiences… so that users can interact with the bots.

“The real magic in the Chatbots is it creates a contrasting experience to the traditional customer service experience on the phone or online where you’re in an endless queue, where you pressing #1 for this and tapping #2 for that,” Feller said. “We’re enabling Chatbots with artificial intelligence to let business recognise and build experiences paired to what the customer is asking for.”

He said the biggest challenge for Messenger once the bots are live is pairing the customers’ expectations with the reality of what the bots can do.

“It’s not easy to have a Chatbot that is actually helpful, and you need to have a high bar of responding,” he said.

The way Messenger plans to create great experiences is by providing a rich set interactions.

“Text is one interaction, we’re enabling graphics, images and buttons to tap on so a customer can be presented with a couple of different options that they can select and can have an easier navigation assisted by the bot,” Feller said. “Enabling text interactions, assisted by artificial intelligence, plus enabling graphical interactions, is really how you can create magic with a bot and choose which interactions work best with the use case you’re trying to do.”

Overall, he said the new capabilities is about creating more “delightful relationships” with Messenger.

“You don’t have to download and app, you don’t need to go to your website or click on your email, it’s going to be much more instant and much more available to people,” Feller said. “More importantly when you start using these experiences you see how much more simpler and fun they are.

“We’re looking to evolve the platform to make more functionality available to developers can build better, and better things,” he said. “We want to create value for people.”

This article was originally published on Business Insider Australia