Dick Smith Is A Sad Wasteland Of Defeat And Broken Dreams

The Dick Smith of my childhood was a magical place. Gazing with wide eyes at the gadgets and gizmos around me, I was resigned to never owning them but found satisfaction in looking and dreaming. The store that I visited this week was a pit of despair and humiliation, as consumers picked the bones of the carcass and workers faced the end with resigned apathy.

And they mean everything – even if it is bolted down.

I hadn’t intended to enter the doomed vessel that is the Westfield Sydney Dick Smith store when I passed by on Wednesday. But while I was on my way to poke around clothes racks and pretend I knew what I was doing, I was suddenly struck with the realisation that one of my favourite childhood stores would soon be gone for good. I felt the need to go and record what remained, like a stenographer by the bed of a dying man. If anything were to be left over, I expected it to be the Kindles.

The strangest thing I saw were little areas between shelves that had been cordoned off for no apparent reason other than to obstruct traffic (pictured top). The only conclusion that I could draw was that the shop attendants were phenomenally bored and, considering that they will all soon be out of jobs, decided to build themselves makeshift forts from which they can fling unsold phone cases at each other after closing. Phone cases are the one thing they have in abundance. Phone cases, and ennui. A few phones left, but other walls were barren.

There wasn’t much concern regarding security. In the span of only a few minutes I saw two people set off the security alarms (which were $400 per pair), each waiting dutifully by the door before realising that nobody gave a damn. Though to be fair, often people don’t care even if the store isn’t imploding around them.

In lieu of a security guard, a lone party rocker stood watch over the store, determined to party rock until the end of his days. 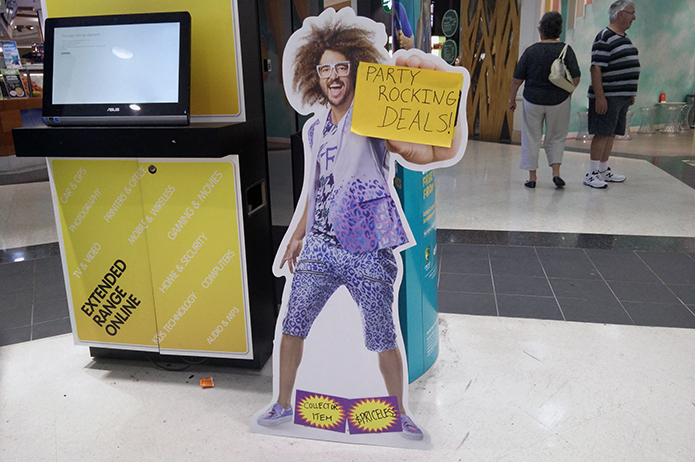 Eat, drink and be merry, for tomorrow we die.

Though he was “priceless” and a “collector item”, I briefly considered inquiring about him anyway. Ever since a boy in my high school art class obtained a cardboard cutout granny, it has been a weird, irrational dream of mine to own a cardboard cutout of a person. I have no idea what I’d do with it. Maybe leave it outside closed doors so that people get a shock when they open them. Maybe talk to it for ten hours straight to max my Charisma skill.

Unfortunately logic won out when I realised that there was no way I could justify bringing him home. “Amanda, why have you brought Redfoo into our home?” There’s no good answer for that.

Besides, he’s a liar. The deals were not party rocking. Maybe swaying gently in a rocking chair as they nod off into blissful oblivion. There is nothing for me here, only death.

The game bargain bin, the one area of possible potential, held a selection of predominately PS3 games which you already have if you have any interest in them. They included Gran Turismo 5, SingStar Ultimate Party, Uncharted 2 and 3 and Beyond: Two Souls. I admit, like a sucker, my heartrate momentarily spiked when I spotted the sign. Game Titles: 70% off. I knew all would be an arid desert, but the optimist in me had to go and poke the tumbleweed. Five hundred bucks for this weird table, if you want your dining room to look like a contemporary art gallery.

All the fixings were on sale – tables, shelves, cupboards (though it was noted that the lockable cupboards came sans keys). Everything you need to start your own store, because I can’t imagine what use you’d have for a giant slanted table with appendages for securing mobile phones, unless you ran a store. Maybe to hold one of those fancy dégustation meals you see on Masterchef and Heston’s Feasts, where the food is stuck to sticks to make it look like they’re flowers. That little sign there says ‘Sold – Matt’. I don’t know if Matt sold it, or bought it. Either way, good on you Matt.

While I was photographing the above table, a store attendant helpfully informed me that it had already been sold. I was not interested in buying it until he informed me I could not have it, at which point I immediately tried to figure out how I could use it. “I could use it as a computer table. I could put a fishbowl on it. It seems like the kind of table that you’d put a fishbowl on. I could get fish.” I have no clue for what purpose the purchaser has found for it, but I have to commend his presumable ingenuity. Such savings. Much deal. Wow. That would never fly at JB Hi-Fi.

Everywhere were little yellow and purple signs proclaiming deals, hastily scribbled and slapped up all over the place, as if the existence of discounted items in this no man’s land free-for-all wasn’t clear from the utter devastation and chaos surrounding us. The employees were clearly going through the motions. “Why are we putting up signs?” “It’s the way it is done, son.” “But why? What purpose does it serve?” “It is how our forefathers did it, and their forefathers before them. Now shut up and write – the people have to know that our last items are on display.” I feel like there’s a good Disney/Pixar story here. The Little Radio That Was Left Behind, with voices by Harrison Ford and Ellen Page.

As previously reported, store fixtures such as peg hooks and signs were all up for grabs. If I were opening a shop and needed pegs, I’d probably buy them in bulk from the internet, rather than scavenge closing down sales. I suppose you could use them for an art project. You can use everything in art projects. Probably some sort of statement on consumerism.

The best thing I saw by far, and the one thing I more than briefly considered actually purchasing (aside from Redfoo), was the clearance on clearance stickers. Yo, I heard you liked clearances…

Upon first entry to the store it hadn’t appeared as stripped bare as I had expected – there were a few phones, cables and mini portable turntables remaining. But upon closer inspection it became apparent that the presence of marketable products was a mere illusion. The remnants of commerce were all configured to give the appearance of much more going on in the store than there actually was. All that was really left were things that even bargain hunters didn’t want to pick up. Check out that wire management. This reminds me of the Parliament of the Daleks.

Behind the counter a pile of disabled security devices and display pegs spilled out from a cupboard, as though somebody had run a knife through the belly of the store and spilled its disembowelled guts onto the floor. As the world crashed in around them the staff marched on, carrying out their duties despite everything around them indicating the utter collapse of all systems of organisation, civilisation and humanity. Akin to the band on the Titanic, they continued brave-faced toward the end of all things, dutifully guiding patrons toward life boats while the water rose around them. Godspeed, my friends. I will never bring my children to Dick Smith to check out the 51st Sims X expansion. And as flippant as I am about it, it’s a little bit sad. As much as it declined in its dying days, and as offputting as its prices often were, I’ll always associate Dick Smith with my childhood wonder and excitement.