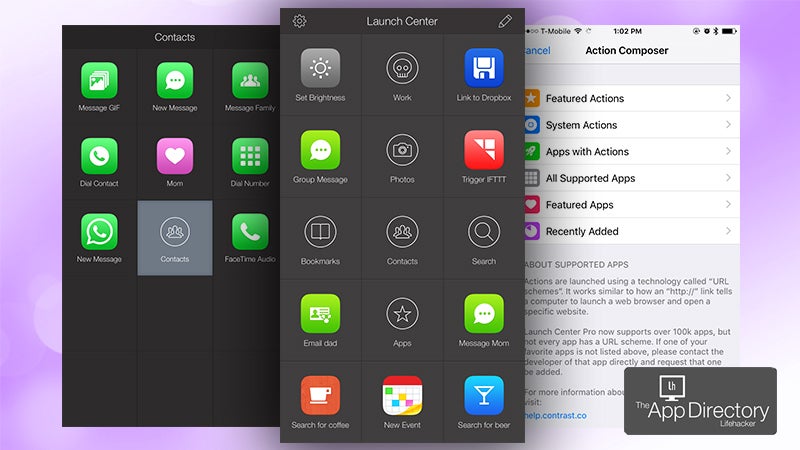 The iPhone doesn't support app launchers in the same way as OS X, but that doesn't mean app developers haven't come up with clever workarounds. Case in point, our pick for the best launcher, Launch Center Pro lets you launch not only apps, but specific actions within apps.

Launch Center Pro is one of the first apps to get the idea of being a launcher on iOS right. Instead of simply linking you to various apps on your iPhone (which your home screen already does), Launch Center Pro links you to what it calls actions. An action is what you do inside an app. For example, from Launch Center Pro, you can instantly jump into Facebook's new photo page, start a text message to a specific person, compose an email to a group or countless other things. Launch Center Pro essentially gives you access to a specific place inside an app without you having to tap around a bunch to get there. It's incredibly useful once you get the hang of how it works.

Launch Center Pro does an admirable job of toeing the line between the average user and the power user. When you open up the app, you're greeted by a number of tutorials to help you get started creating your own actions. Within a few minutes you can instantly create launchers for simple stuff, like texting a close friend or searching for coffee near your current location using Yelp.

While Launch Center Pro certainly does its best to make creating actions easy, it's still a little complex for the average iOS user. Still, if you're willing to invest just a little bit of time in it, you'll eventually grasp how it works. Once you do get over that hump, the usefulness jumps up quite a bit as you start experimenting with different types of actions, triggers and more. All that said, because of the complexity of the app, it would be nice if there was a free, trial version for people to check out first.

Less directly, Workflow ($4.49) sort of falls under the same category of apps as Launch Center Pro and Launcher. Workflow is an incredibly powerful app that allows you to create your own set of actions that function like micro-apps. Workflow differs a bit because it doesn't always require a third-party app to complete those actions. While Workflow is powerful and does a lot of what Launch Center Pro does, it's not exactly a launcher. Workflow lacks some of the base functionality needed in a launcher app, especially when it comes to a breadth of app support. Still, Workflow can be manipulated to work as a launcher if you spend some time with it, so it's worth checking out if you're looking for something a little different.