How To Crack, Devein And Devour Tasty Crustaceans 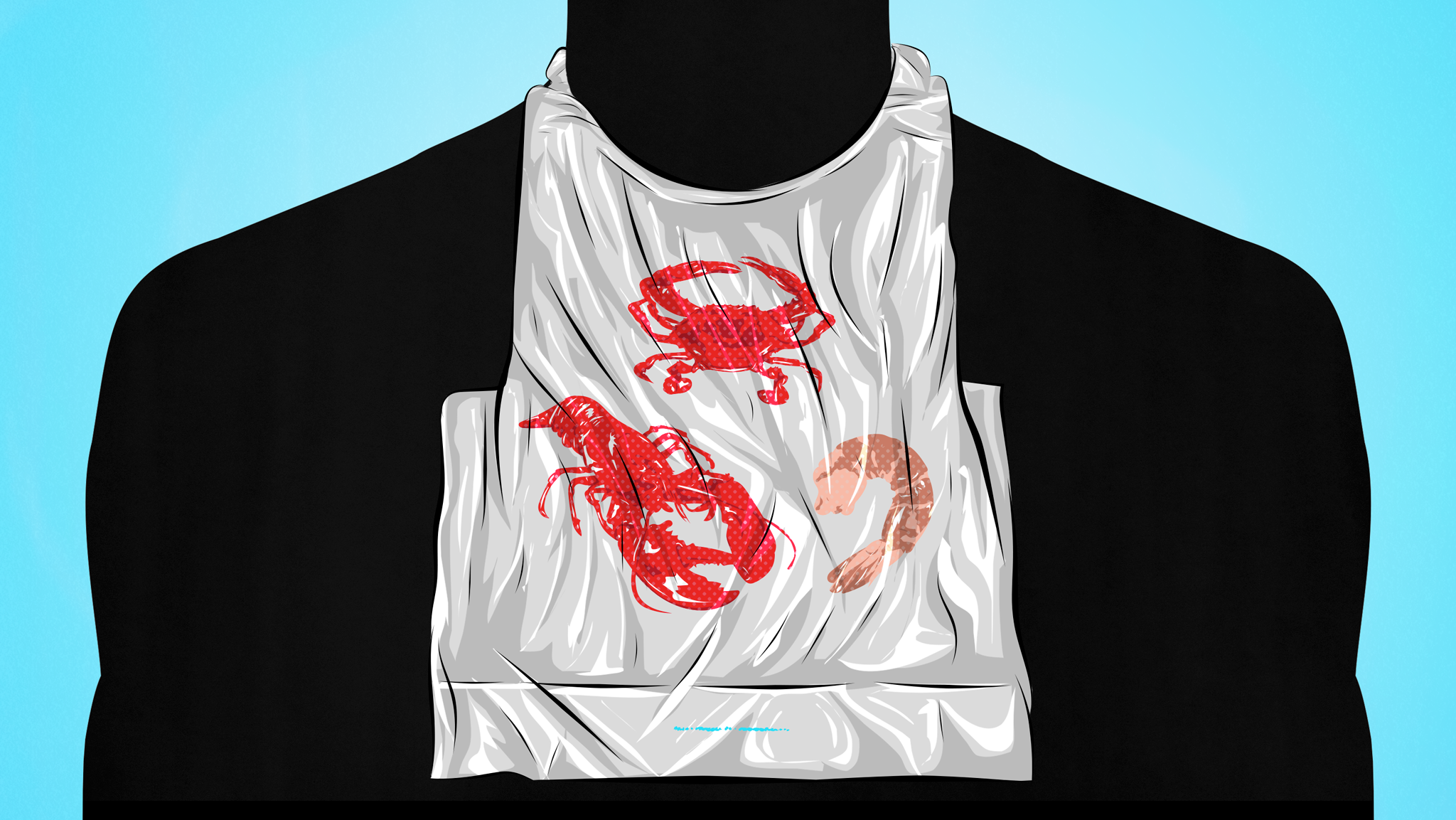 I love crustaceans. Lobsters, prawns, crabs, and crawfish are some of the tastiest things our beautiful ocean has to offer, but all those shells and legs can make them intimidating. Knowing how to eat them is an important skill, and we've rounded up some of the best tutorials that teach you. Illustration by Sam Wooley.

Prawns, Shrimps and That Dreaded Vein

Getting to the meat in both shrimps and prawns is pretty easy but, unless you don't mind eating a digestive tract (and some people really don't), you need to know how to devein the things. There are a few ways to go about this. This video shows you three of them:

The first method is simple enough. You simply twist the head off, carefully peel off the the shell (starting on one side of the body and gently rotating the meat out) and remove the tail by squeezing it while gently tugging out the meat. Once the shrimp is peeled, gently run a small, sharp paring knife down the back of the shrimp, spread the meat and pull out the vein. You now have a nice little shrimp or prawn, all ready for the barbie (or pan).

If you want to leave the tail on, just decapitate and peel in the same way, and leave the damn tail alone. To devein, straighten out the body of the shrimp, and look for the beginning of the vein at the decapitation site. (Do shrimps have necks?) Keeping the shrimp straight, pull the vein out and discard. Did I mention you have to keep the shrimp as straight as possible? It's very important, failing to do so may cause the vein to break inside the shrimp, which isn't the end of the world, but you will have to open the shrimp up and fish out the rest of the vein.

The third method lets you devein and peel while leaving both the head and tail on, and involves cutting down the back of the shrimp, through the shell, and removing both vein and peel all together in one motion. This method take a little more practice.

All three of these methods work fine, but I love the flavour that shrimp has when it's cooked with the shell, tail and head. I used to devour peel-and-eat shrimp with wild abandon, but ever since I learned about that damn vein, I've been a bit squeamish. Luckily, there is in fact a way to remove the dreaded poop chute without removing the head, shell or tail. All you need is a toothpick.

This is so elegant I could scream, but it takes a steady hand and a fair amount of practice. First, you need to disconnect the vein by swirling the toothpick between the head and the body, and rinse out that little space to remove any excess grit or gunk. Next, poke the toothpick between the tail and shell, and locate the vein. Hook it on the pick, and gently pull the vein out by twirling it around the toothpick. Cook that sucker, and peel and eat as you did during your days of blissful ignorance.

I love the taste of lobster, but until recently had been timid about ordering a whole one, worried that I would make a fool of myself trying to disassemble the giant bug of the sea. The dude in the below video walks you through the whole process in an easy to follow manner, while pointing out the every single piece of "succulent meat" you might have missed on your own.

For someone with a millennial-esque attention span, I thought seven minutes of lobster breakdown would be too many minutes, but the whole thing is so informative, the time flew by. One major takeaway is that eating lobster is about so much more than the tail; as our enthusiastic lobster guide explains: "there's meat in every nook and cranny!" (Oh, and if you're not sure what "tomalley" is, it's that soft, greenish stuff in the body cavity that acts as both the liver and the pancreas. It's considered a delicacy, and can be added to sauces and stews, but should be consumed in moderation as it can contain toxins associated with paralytic shellfish poisoning.)

When I was living in Florida, there was one thing I looked forward to each year more than any other thing, and that thing was stone crab season. If you've ever ordered stone crab, you know that you can only order the claws. I never questioned it, because the claws are very delicious, but it turns out that the claws are obtained by removing them from the live crab, and then throwing that crab back in the ocean, where it will eventually grow another claw.

Though it is technically legal to remove both claws from one crab in the US, doing so is pretty rude, and all of the crabbers I know (like, two guys) only take one at a time. (The crabs can lead a clawless life, but they must make the transition from hunter to scavenger, and it leaves the little guy pretty much defenseless.) This information doesn't really help you crack into a claw, but it is interesting, if slightly horrific.

Anyway, once you've wrapped your mind around the "renewable" delicacy that is the stone crab claw, you are ready to get crackin'. Stone crabs are a popular meal in the US, but you can get them in Australia as well.

Stone crab claws are startlingly easy to get into, and can be cracked with the butt of a butter knife. Hold the claw with the inside pointing upward and give it a whack or two. Once you see a crack, gently pull the claw apart and feast on the glorious meat inside, with or without lemon butter. (Related: does anyone else want to hire the people in this video as a kind of father-daughter life coach team or is that just me?)

I once attended a wedding in Maryland and, before the festivities, made my shellfish-phobic boyfriend take me to "eat some delicious crabs" because I had heard that was the thing to do, food-wise. He took me, but instead of "eating some delicious crabs" I mostly "made a horrible mess and got very little meat", forcing my boyfriend to sit there, not eating, watching me fail at eating crabs. Don't be like me. Learn how to eat a whole crab.

First of all, don't use a hammer, those are for nails and coconuts, and don't be afraid of the meat in the body. You'll have to clear away some organs and whatnot, but behind all of that is meat, glorious meat. To get to the meat, remove the shell, clean up the organs and crack that body in half lengthwise. Use a tiny little oyster fork to pick the meat out of the pockets, and enjoy. As the video instructs, you don't need to be afraid of that yellow stuff. It's "crab butter" or "mustard", and it's pretty much the same thing as the lobster tomalley we talked about before. Once the body is taken care of, attack the legs by cracking, and gently pulling out the meat.

Of course, there's more than one way to crack a crab, and the gentleman in our next video approaches crab eating with an "eyes to innards" philosophy. I say this devoid of sarcasm: this man is an artist and he will teach you how to eat every bit of crab in the most efficient way possible. (Wisest words: "To eat crabs you have to be a good sucker, and a good licker.")

I would however, avoid using your teeth to crack the shell; you're just asking for a terrible trip to the dentist.

As someone born just across the river from Louisiana, you would think eating crayfish would come naturally to me, but you would be very wrong. I find them to be one of the more confounding crustaceans, and have a history of ordering them in an etouffee and just skipping the whole mess.

But no more. I am finally going to get in there and get messy, and this video makes it look not so hard. (If you don't need to be told to set out plates and napkins, skip to a minute in for the real action.)

The first step is to remove the head by holding it firmly and twisting the tail away to pull out the meat. ) Some people suck the "juices" out of the head at this point, but some do this after eating the tail meat. The choice is yours!) Next, pinch each segment of the shell along the tail to crack it along its back. Stick your thumb in that crack and peel out the meat.

All of these tasty delights take a bit of work to enjoy, but I've always considered that part of the fun. Cracking claws and sucking out juices make the eating of crustaceans a more visceral, primal dining experience, plus it just looks kind of badarse.