PC gaming gear can be fun, and even help you be more productive, but it’s rare to find ones designed to be customisable and high-performance for gaming but equally useful when it’s time to get things done. Das Keyboard’s new gaming line, Division Zero, manages both, with some caveats.

Division Zero is Das Keyboard‘s first foray into gaming peripherals, a market already saturated by big names and popular brands. That doesn’t mean they didn’t bring solid gear to the table, but it does mean you have to weigh it against some well-known competition. Here’s the lineup:

All in all, their prices are on par with other PC gaming peripherals: Pricey. If you’re rocking the keyboard and mouse that came with your PC, these aren’t for you. However, if you love features like programmable macro buttons, LED backlighting, customisable profiles and sharp, enthusiast-focused design, then it’s nothing you’re not used to. If you’re a mechanical keyboard enthusiast, well. You’re definitely used to playing this much for a keyboard. (You may have to do a bit of hunting around and/or budgeting for shipping to get the mouse and mousepad in Australia.)

After using all three, it’s safe to say they shine both for gaming and for getting work done, which is exactly how I prefer my peripherals. I want them to pull double duty on my desk, and for the amount of money you’d spend, you probably would too. They’re not perfect though, and have some glaring drawbacks that should make you think before pulling out your wallet. Let’s break them down into three big categories: build quality, customisation and usability, with special attention to those fancy custom switches. 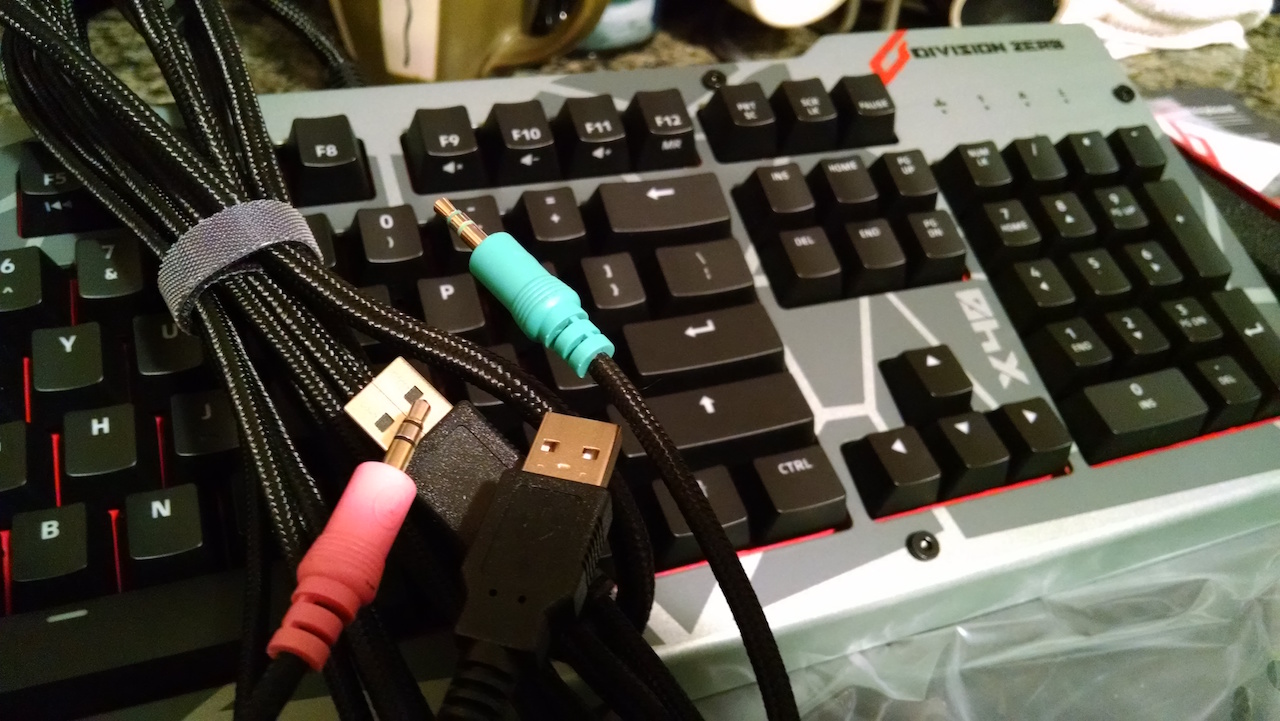 A mess of cables, but all braided, fabric-wrapped, and with their own velcro for easy management.

A mess of cables, but all braided, fabric-wrapped, and with their own velcro for easy management.

Both the X40 and the M50 are sturdy and feel like you could put them through a long gaming session or an arduous workday. That’s exactly what I did, since my work and gaming are in the same physical place. I wound up using the X40 and the M50 for work all day writing, and I would swap them over to my gaming PC for a few hours of blissful, cathartic destruction, puzzle solving, and exploration. The X40’s aluminium build and heavy body served it a little better than the M50’s mostly plastic (but still heavy) build. The braided cloth cables on both are great for keeping dust away and avoiding tangles, and the cords are nice and long with velcro wraps to keep the slack managed.

The M50 is a quality ambidextrous gaming mouse, which is nice to see. I found the scroll wheel really stiff and tough use (especially compared to the Logitech MX Master I use for work and the Logitech Proteus Core I use for gaming) but it loosened up over time (or maybe I just got used to it.) The 47W is grippy and won’t move or slide around even a smooth desk surface (like mine), and is large and nicely sized.

If you’re going to spend this much on gear, you may as well get the most possible use out of their customisation features. The programmable macro keys work with third-party tools like AutoHotkey, which we’ve shown you how to use with your gaming gear, by the way, just as well as Das Keyboard’s own software.

In Windows, all you need to do is press Fn + F12 to enable macro recording. Making the special buttons on the X40 and the M50 do whatever you want them to do, whether it’s an Excel macro or a spell rotation, is easy. If you prefer to use AutoHotKey or another utility, it’s just as simple — just tap the button you’d like to assign the action to, program it, and away you go. You can easily turn the five programmable keys on the left side of the X40 into web browsing actions or music controls (technically there are function keys for that, although I miss the Das Keyboard 4’s hardware audio controls and volume knob) and then switch them out for weapon loadouts in your favourite shooter or attack rotations in an MMO.

The other big customisation feature on the X40 is one that will cost you money: aluminium top panels for your keyboard. Das sent us two to switch out with the default aluminium silver: the “Defamer” in mustard, and the “Stryker” in red. Both have subtly different designs, and there’s also a Defamer in silver and a Stryker in olive green if you prefer those colours. Each additional panel will set you back $US39 ($55), which is a lot, but if a fresh top panel will give you that fresh-keyboard-feeling without actually buying a new keyboard, we say go for it and swap them out when the mood strikes. 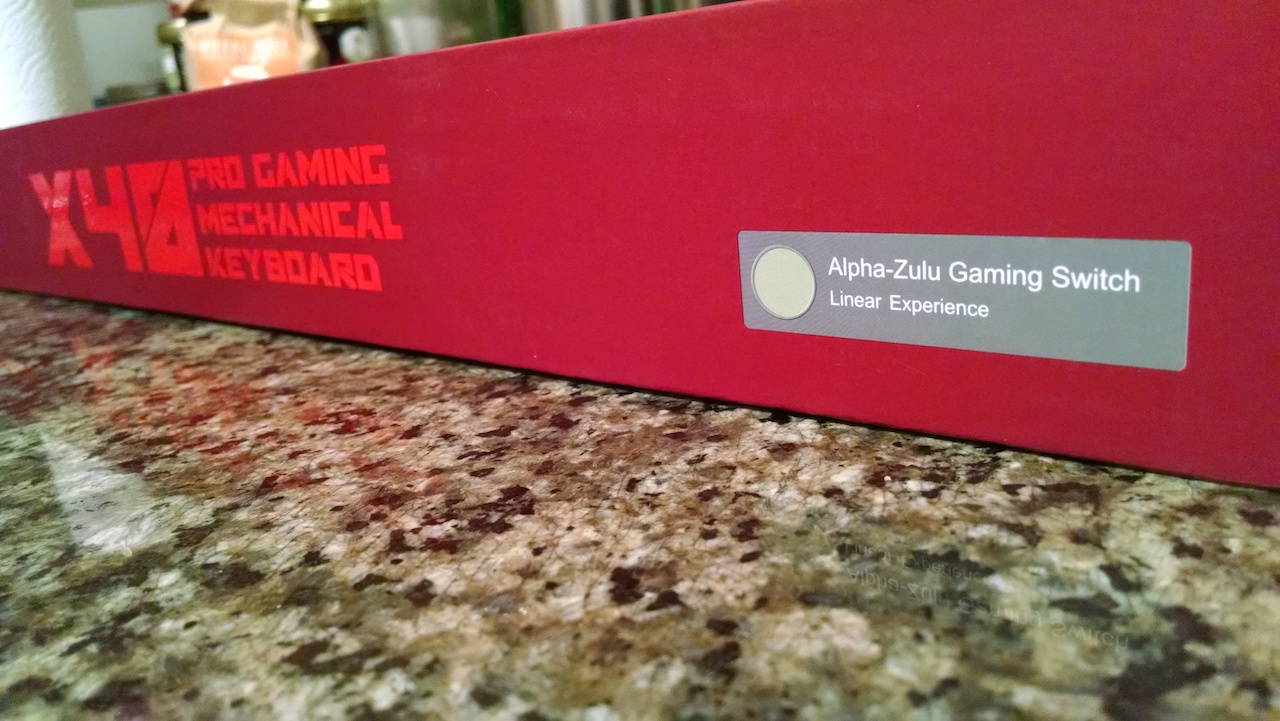 Each keyboard proudly displays the switch you chose. Linear is off-white, tactile is green.

Each keyboard proudly displays the switch you chose. Linear is off-white, tactile is green.

Speaking of the keys on the X40, we discuss those new Alpha-Zulu mechanical switches that Das is so proud of. The switches come in “linear” and “tactile”, both offering the same 1.7mm travel distance and 45g actuation force, but the difference is how the two feel. The linear switches aren’t tactile or clicky, and the tactile ones still aren’t clicky, but they do require a little extra force to engage the key halfway through the travel distance. What that all means for you is that the “tactile” ones are for gamers used to half-pressing their keys and then engaging them fully at just the right time, while the linear ones are for people who hold those keys down and rely on long-presses. I tested the linear switches.

The switches are great, but they’re not perfect. They’re quiet but satisfying, and give you the depth and key traversal you want from a mechanical, but without the audible “clack-clack” that often comes with. However, if you’re a Cherry MX lover and you love that audible click, you’ll miss it. If you use the linear model and miss feeling the actuation point, you’ll miss that too.

When I switched between the X40 and my trusty Corsair K70 with Cherry MX Red keys, I definitely missed the sound, but after even a few days I was more than used to the quieter profile. (Which was especially nice, since the linear switches are similar to the MX Red.) They won’t drive you or anyone else nearby nuts while you work, and they’re still fun to play on.

Where They Fall Short 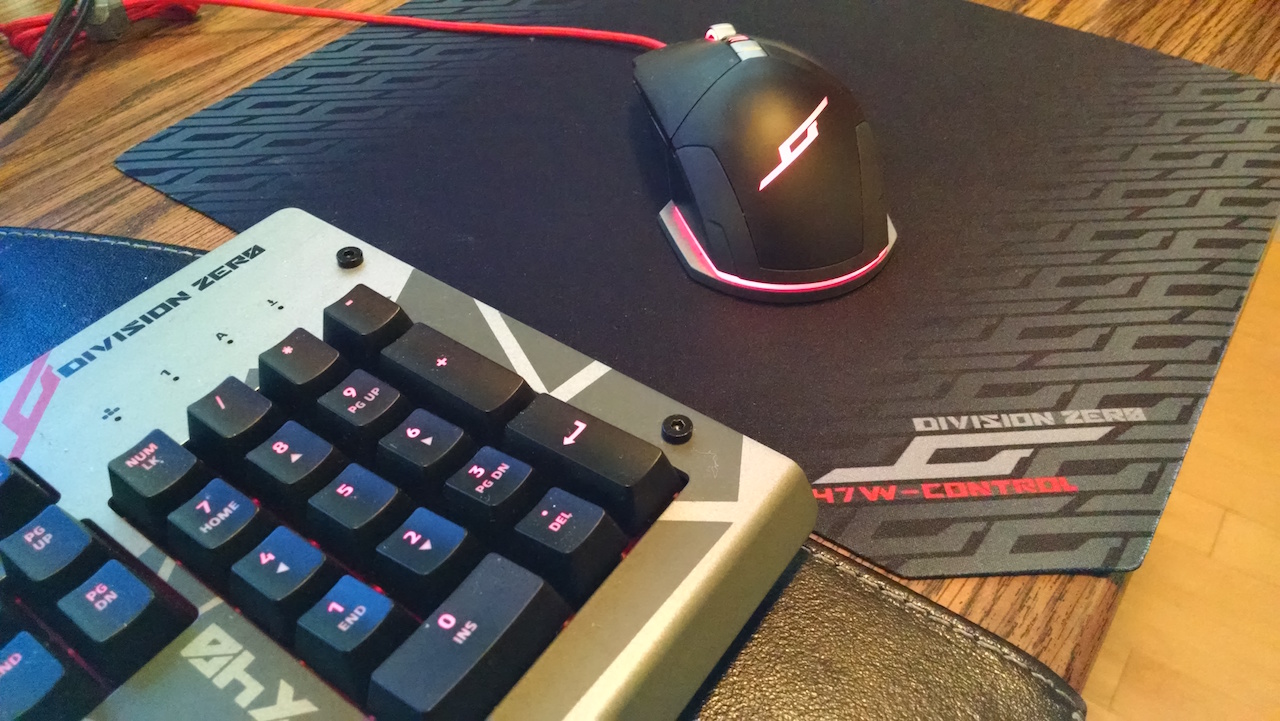 Even in low light, the keyboard is somewhat weak, but the mouse pulses brightly.

Even in low light, the keyboard is somewhat weak, but the mouse pulses brightly.

Division Zero line has its strengths, but it also has weaknesses. We wouldn’t be writing about it if we thought it sucked, but there are some things you should pay attention to if you’re thinking about buying.

These drawbacks may be dealbreakers for some of you — especially the price. If you don’t mind splurging, or you’ll use yours for gaming and for work, then they may be a good buy, especially when compared to its more popular — and in some cases more affordable — competition.

The Bottom Line: Pricey, but Sturdy, Sharp and Fun to Use 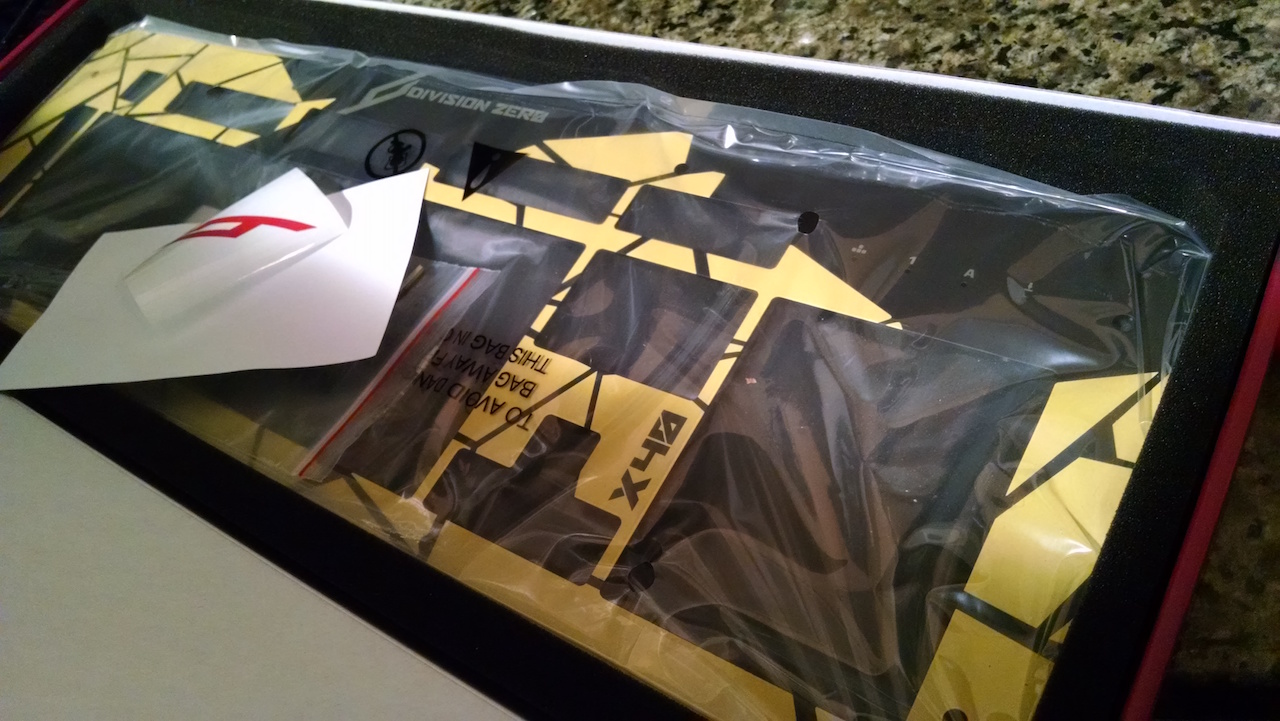 The “Defamer” keyboard cover, which includes the wrench required to swap top plates.

So that leaves us with the big question: Should you buy these? Well, we can definitely recommend the 47W mousepad and the X40 keyboard. The M50 is a little trickier to tell you to buy.

The mousepad is huge and grippy, and will probably stay on my desk long after the M50 makes its exit in favour of the less-ambidextrous but smoother-to-use Proteus Core, which is still my favourite mouse for gaming right now, and I’ll probably continue to use my MX Master for work. In short, the M50 is great, and great for lefties or people who just prefer an ambidextrous mouse, but it’s stiff, a little heavy, and while it glides across your desk easily enough and has all the right DPI settings, I still felt myself missing the button layout of the Proteus Core, and if I had to run out and choose one from a store shelf, the Proteus Core is cheaper.

Getting back to the 47W control surface though: You’ll have to choose the surface you think is best for you. I liked the Control surface a lot, and the price there is about right for a “gaming” mousepad, if that’s what you want. If you don’t though, well, it’s an easy one to skip.

The X40 is a bigger deal though. I liked it, enough to push over my Corsair K70 sometimes. I like the idea of the changeable top plates, but I’m also a sucker for customisation like that. Little ways to make something you own feel brand new are a great way to spend a little where you could have spent a lot. However, the X40 is definitely missing things I miss from other keyboards. And like the others here, it’s pricey. Even so, it’s fun to use, great to type on and play on, and it’s the first keyboard in a while that I enjoyed writing on as much as I enjoyed gaming on. If you can try it before you buy, definitely do, and make your own decision, but I don’t think you’ll be disappointed.