We're Not As Open-Minded As We Think We Are 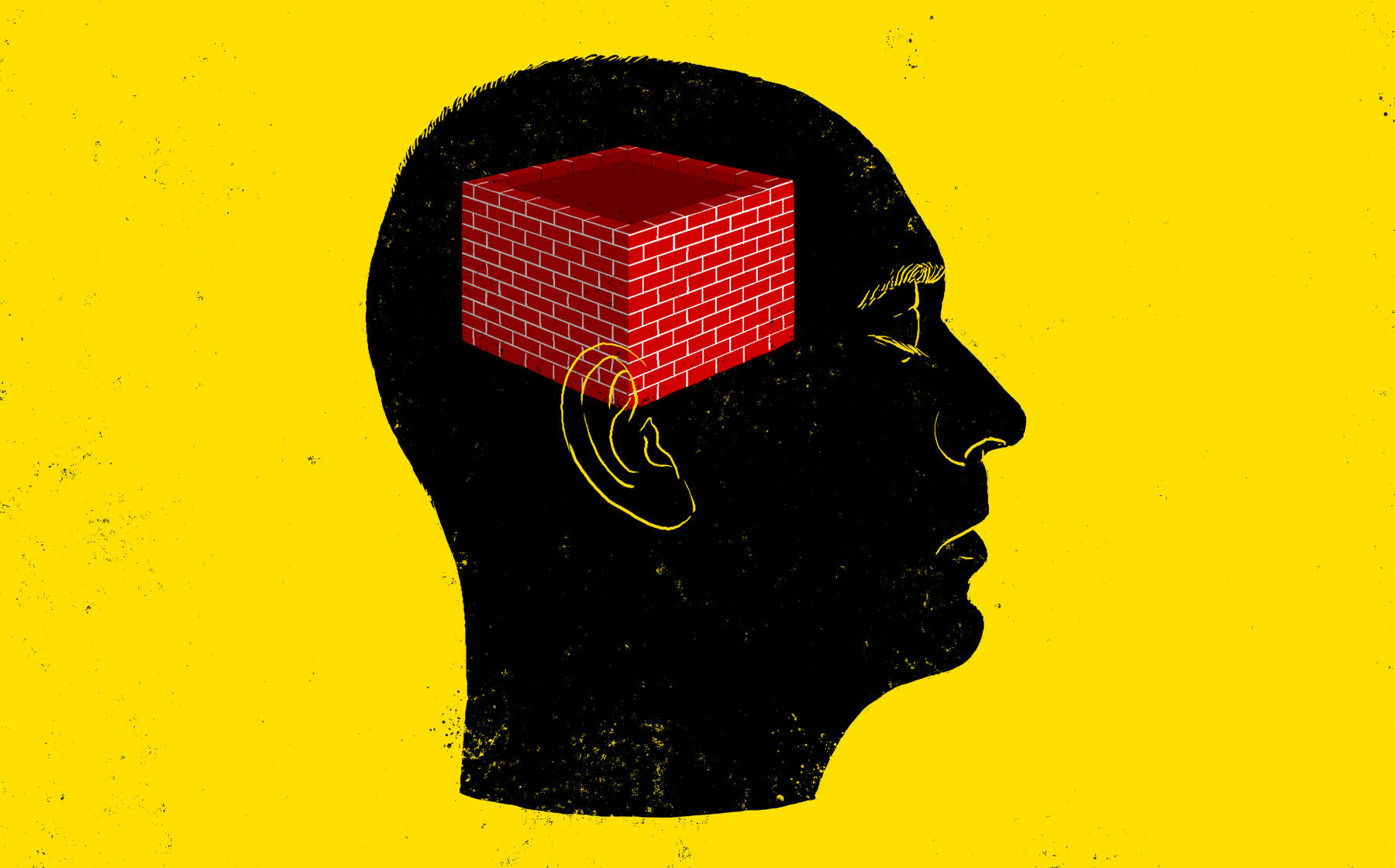 We all like to think we're open-minded, but even the most "open" and "informed" among us are a lot more closed minded than we'd like to think or openly admit. Let's look at why this is the case, and what, if anything, we can really do about it. Illustration by Jim Cooke.

Being open-minded is, traditionally, about acknowledging the possibility of an idea being true or false. We all close our minds about a lot of things, and that's not inherently bad. Once an idea is proven false, we should discard it. Most of us don't need to waste our time being open to things factually false, and keeping an open mind to everything would mean you could never form an actual opinion on anything that's less than a proven fact or fiction. Thankfully, you can be open-minded but still retain critical thought, but it takes work. 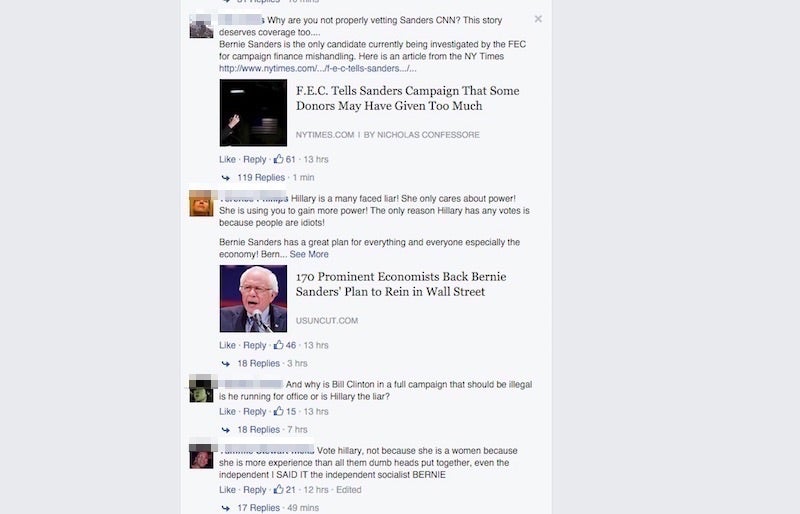 Nobody wants to hear that they're wrong. When someone challenges your beliefs, you should take that new information and reassess how you feel. Yet, the reverse is usually true. When we're challenged with new information, it just makes our preexisting belief stronger. This is called the backfire effect.

Anecdotally, I've seen the backfire effect most often this year in arguments between Hillary Clinton and Bernie Sanders supporters in the US presidential election. On the Sanders side, the most prevalent argument I've seen is that Clinton is too pragmatic, too dynasty driven and untrustworthy. When someone makes a point otherwise, say, on Facebook, Sanders supporters flock to drop in links that support their argument. Clinton supporters do the same, and it ends up being a mindless back-and-forth of people only supplying viewpoints that strengthen the opinion they have already formed. I'd venture a guess that nobody bothers to read a single one of those links past the headline.

Our preconceptions challenge our ability to take in new information. This makes it hard to keep an open mind to new ideas. The above examples are simple, anecdotal notes about some random people I know, but it's not like this exists in the vacuum of a Facebook feed. You Are Not So Smart throws down several examples of this effect:

When scientists had people watch Bob Dole debate Bill Clinton in 1996, they found supporters before the debate tended to believe their preferred candidate won. In 2000, when psychologists studied Clinton lovers and haters throughout the Lewinsky scandal, they found Clinton lovers tended to see Lewinsky as an untrustworthy homewrecker and found it difficult to believe Clinton lied under oath. The haters, of course, felt quite the opposite. Flash forward to 2011, and you have Fox News and MSNBC battling for cable journalism territory, both promising a viewpoint which will never challenge the beliefs of a certain portion of the audience. Biased assimilation guaranteed.

The short of it is simple: challenge my beliefs, and instead of thinking critically about your challenge, I'll sit around thinking how right I am and how stupid you are. When we're shown something that undermines what we believe, we get confused, maybe even angry, but we rarely change our minds. This happens independent of the tone of an article. People may argue that if a belief is challenged in a more neutral manner, it leads to better discourse, but that's never the case. The more neutral an argument is, the easier it is to dismiss (or just flip it to your side).

Sadly, there's not a lot we can actually do here to fix this. The best you can do is accept the possibility you're wrong, wait a heated debate, or an anger-inducing article out for a little while, then reassess once you've cooled off a little.

We Focus On What Benefits Us Directly

This probably comes as no surprise, but we pay more attention to the issues that affect us directly and sideline the ones that don't. Because of that, we're arguably more close-minded about an issue that doesn't directly impact us. This happens with a lot of issues, especially with class, race, gender and sexuality, but money is one of the easiest examples from an instructive point.

Student loan debt is the simplest example of this. Different political parties may have different stances on student loan debt and some semblance of a plan to deal with it. If you have a lot of student loans right now, you’re probably looking at which party would benefit you the most. It’s also probably one of your big arguments for a particular party over another. If you’re just out of university, you're likely to follow any student loan reform following closely, and the party who offers a program that benefits you directly will be the one you side with, other issues aside.

Of course, on the flip side is another voter who doesn't have student loans, either because they didn't go to university, they already paid off their loans or they had enough money to pay for university out of pocket. In that case, student loans may not be on their radar at all. In fact, it might be such a non-issue that they're baffled by why it's a major talking point. Worse, that money for student loan reform has to come from somewhere, and that may affect them at some point, so they may be interested in voting against your interests.

It's really hard to see both points of view at the same time. If you've already worked hard to pay off your loans or you paid out of pocket for university, you'll feel cheated or wonder why everyone else can't do that too (although clearly there are reasons why). On the other hand, if you're struggling to pay rent because half your paycheck goes to student loans, you can't imagine why the government hasn't already addressed this problem. If the interest alone on your debt is higher than the loan itself, it just makes sense to offer refinancing.

Of course, this is an incredibly complicated issue, with lots of variables, but most of us cannot see past the benefits that we ourselves would potentially walk away with.

The fact is, when we talk about issues that directly effect us we often have a self-serving outlook. None of that's to say one point is more valid than another, but it does mean it's extremely hard to remain open-minded about policies when they directly affect you. It's difficult to take yourself out of the equation and think about the greater good. Putting yourself in another's shoes is one of those silly recommendations that always come along with open-mindedness, but it's probably the only approach that will help change your views.

Besides, Nobody Actually Reads Opposing Views

We've said before that if you want to open your mind, read opposing views from various outlets, sit around ruminating about each argument and then form your own opinion. Let's be honest for a second: Most of us don't ever actually do that.

Sure, a lot of us might take the time to watch an opposing side's debate. We may even have ourselves convinced that we're actually paying attention to opposing viewpoints and not just looking for holes to poke in them. But I'd venture a guess that the popularity of the Republican debates has more to do with spectacle than it does with open-mindedness. People like watching Trump do Trump because it's entertaining. If you agree with him, you'll rally behind him. If not, it's a great excuse to yell at the TV. Listen, I agree, it's fun to yell at the TV. It's fun to get angry and go on some rant about some political ideology. But c'mon, most people are not reading opposing viewpoints, putting on their critical thinking caps and deeply thinking about the issues at hand.

The backfire effect tends to make it so even if we do take the time to read opposing viewpoints, it ends up just reinforcing our existing beliefs. Few people will counter with, "look, I read that op-ed with an open mind, and here's what I disagree with, here's what's sparked some new ideas for me and here's where I'd like to learn more." Most of us don't read an opposing viewpoint with the idea it could be true or false. We go in thinking it's false, or that we're doing ourselves some masochistic good by reading someone else's opinion, and we use that as fuel to stoke our preexisting opinion fire with.

The best solution for this problem is to keep your mouth shut and listen to an opposing view. Don't react, don't poke holes. You can read or watch all you want, but if you're in a conversation, you have a better chance of actually hearing what the other side is saying if you shut up and listen. Before you fight back with your opinions, take some time and just sit on that new idea.

The fact is, it is astounding difficult to go into a political conversation with an open mind. Heck, it's hard on simpler levels. I decided long ago I was sick of superhero movies, and despite everyone's rave reviews, I refuse to acknowledge that I might enjoy Deadpool. Which is ridiculous and makes no sense. But when I think about my own closed-mindedness in silly situations like that, it helps me at least recognise those biases on a macro level. I can only hope that's enough.

What To Do If You Hate Your New Haircut

Heather Yamada-Hosley 17 Jan 2020 2:15 PM
We all know someone who has a haircut horror story... or we have one of our own. You can take steps to avoid a bad haircut, but if you already have one, here's how to get it fixed.