Tip Tester: The Best Way To Infuse Your Own Gin

Like all infused spirits, gin is something you can infuse on your own. As long as the predominant flavour of your infusion is juniper, then you have, by definition, made gin. But just because you can do something yourself doesn’t mean you should, so we set out to test three different DIY gin recipes, no bathtub required. Photos by Claire Lower. 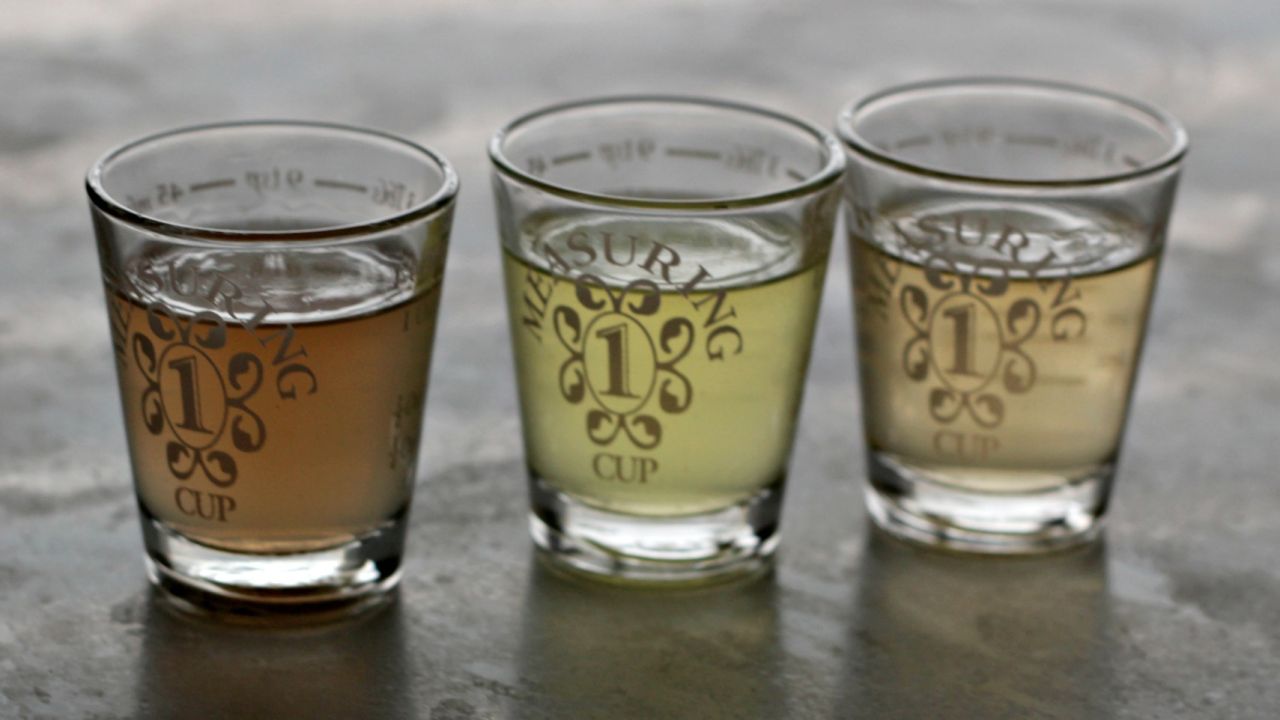 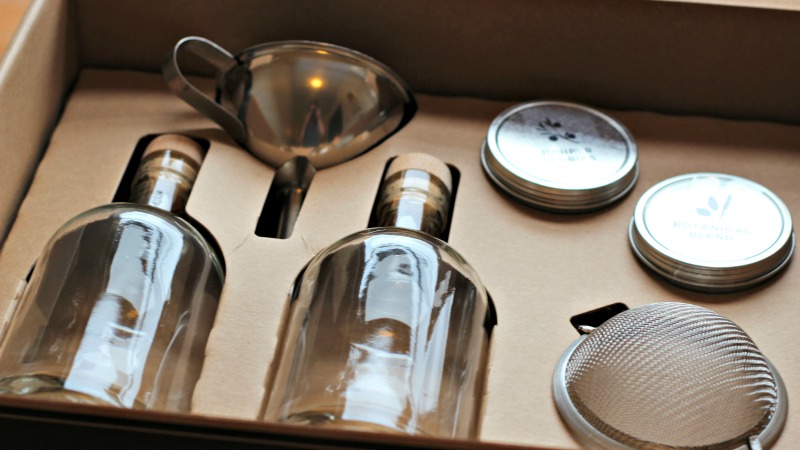 Homemadegin.com aims to give you everything you need to “transform a generic bottle of vodka into a unique and delicious home-blend of your very own gin”. Their kit is your easiest, laziest option, and mostly just involves dumping the contents of tins into a bottle of vodka and waiting around. 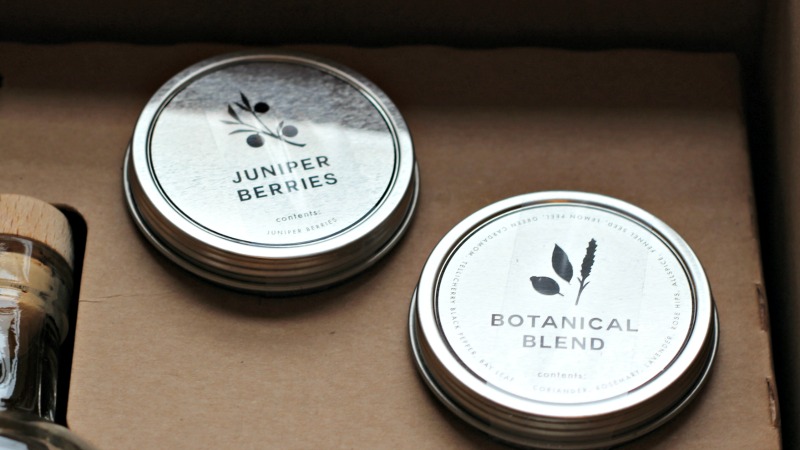 How it Works: The kit comes with all the botanicals you need, already sorted into neat little tins. In addition to the plant parts, the kit comes with a funnel, a strainer and two glass bottles for storing. Besides buying a bottle of vodka, all you have to do is dump, shake and wait. The process begins with juniper berries, which are infused for a full 24 hours before the other botanicals are added. Once the second tin is dumped into the bottle, the whole mess sits for another 12 hours, after which it is strained into the provided bottles.

Flavour: The resulting spirit is probably a little different than the gin you’re used to drinking. The kit produces an amber coloured, deeply-flavoured beverage, that is quite different from Bombay, Hendrick’s or Tanqueray.

The primary flavour is juniper, but fennel comes in at a close second and almost overshadows my favourite berry. There’s a root beer/cola quality to it as well, which is nice for splashing into some sparkling water, but a bit heavy handed when used in a cleaner cocktail like a martini. If I were to use this kit again, I would only use about half of the botanicals for a 750mL bottle of vodka.

The Upshot: There’s barely any effort involved on your part, and the funnel, strainer, and bottles are all good quality. Once you have the kit, you can order more botanical refills, or you can go rogue and make your own infusion blends. 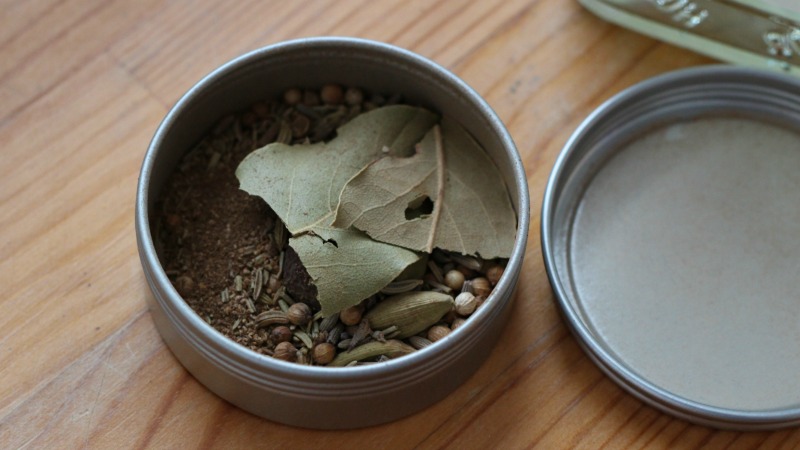 It’s a pretty expensive way to get your gin and, though it’s a matter of personal taste, the resulting liquor tastes more like a diluted bottle of bitters than a crisp, clean, juniper-forward spirit. The flavour also keeps intensifying; though the strainer is great at removing all the big chunks, like the berries and leaves and whatnot, it doesn’t catch some of the more powdery sediment, which makes its way into the final bottles and continues to flavour your spirit. I’ll definitely finish (and enjoy drinking) what I made, but I’m not going to reach for it when I’m in the mood for a martini. 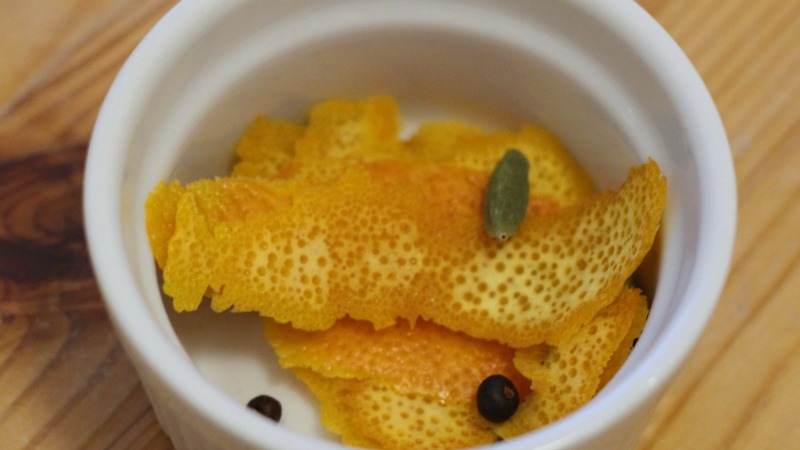 If you’re the type of person who is more likely to have a bottle of vodka than a bottle of gin in your home bar, this super quick gin recipe from Anova let’s you quickly infuse a bit o’ booze with the help of an immersion circulator.

Special Equipment and Ingredient: Anova Precision cooker, or other immersion circulator, a sealable plastic bag, plus:

Note: I could not find Grains of Paradise or a Tasmanian pepperberry at my local hippy grocery store, which leads me to believe that they may be harder to find.

Cost: Assuming you already have a sous vide machine (and I wouldn’t buy one just for this purpose), you’ll end up paying for botanicals — which can be less than two bucks if your grocery sells herbs and spices in bulk — an orange, and vodka. Besides the vodka, the most expensive item was a jar of juniper berries, which I could not find in bulk and set me back about $6.

Assuming you had none of these ingredients at home, you’re looking at about $30-$40 in groceries for 90mL of gin. Of course, the largest part of that is vodka, of which you’ll have plenty leftover. Also, it’s worth noting that the money I spent on herbs and spices actually bought me enough to make this about four times over. It’s a bit of an investment at the outset, and it may cost you more than a plastic bottle of cheap gin, but dropping $10 on juniper berries and the like will give you enough supplies to make plenty of this stuff.

How It Works: Combine all the ingredients in a bag and seal as best as you can. The recipe instructs you to remove the air by slowly immersing the bag in water, forcing it out, but there’s a problem with this plan. Vodka is less dense than water, and a bag filled with herbs and vodka just doesn’t want to immerse in a body of water.

Since everything only needs to hang out for a minute and a half, you can just hold it under water with some tongs, after which you’ll take it out and let it chill in a bowl of ice, massaging a couple of times to let things further infuse. Once it’s chilled down, strain and enjoy.

Flavour: I’m not sure this can technically be called “gin”. If I hadn’t put the juniper berries in myself, I wouldn’t have known they were in there, for they were completely obscured by the orange zest. Basically, what you have is a slightly herbaceous orange vodka, which isn’t necessarily a bad thing, but it’s not gin.

The Upshot: It’s a pretty easy recipe to execute, and “Oh, let me infuse a cocktail for you real quick” is a neat party trick, but what you get is not gin. If you need a recipe for a balanced, fresh and clean orange vodka, give it a go, but if it’s gin you seek? Keep on movin’. 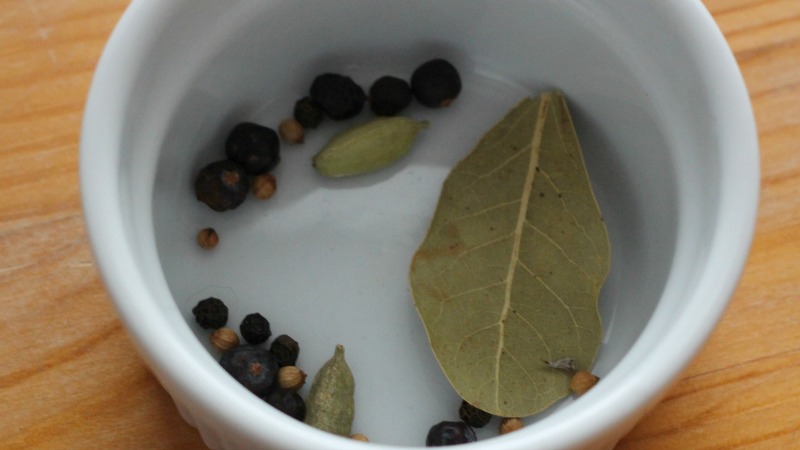 Now this 10-minute recipe from Anova is exactly what I was looking for. This recipe is just as easy as the other two, but resulted in something I’d actually want to drink in a martini.

Special Equipment and Ingredient: Anova Precision cooker, or other immersion circulator, a sealable plastic bag, plus:

Cost: As with the recipe above, most of your money is going to go to vodka and botanicals, though peppercorns and bay leaves are probably already hanging out in your cupboard. Also like the recipe above, the money you spend on a decent bottle of vodka and various plant parts is probably a little more than you would spend on a bottle of cheap gin, but it’s less expensive than the top shelf stuff, and this recipe in particular is worth it.

How It Works: Like the sous vide recipe above, you chuck it all in a bag and immerse it in the water bath to the best of your ability. I didn’t want to stand there the whole 10 minutes holding it under with tongs, so I just did my best and left it partially floating. After 10 minutes, you remove the bag, strain out the solids and chill for at least 15 minutes. 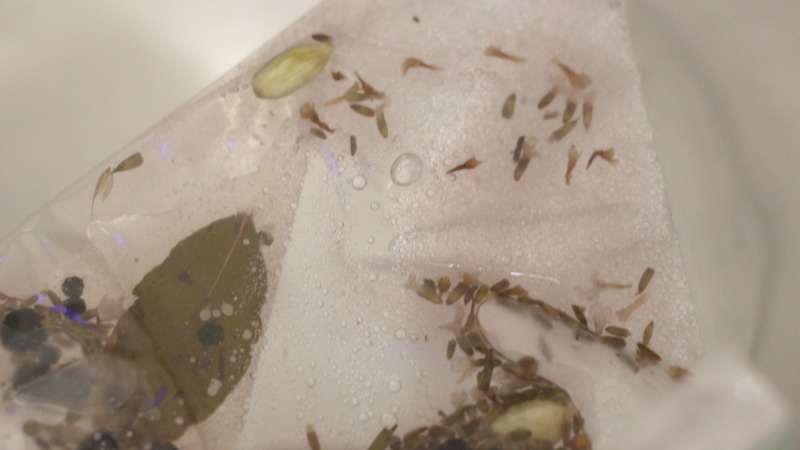 Flavour: This is a gin that I was very happy to consume. It was flavourful, juniper-forward, with spicy and floral notes and, while it was flavourful enough to enjoy on its own or with a bit of sparkling water, it was clean enough to hang out in a cocktail without muddying up the flavours.

The Upshot: I think it’s love. Not only is it a quick and easy way to turn plain, boring vodka into a more interesting and flavourful spirit, it’s a spirit that I actually want to drink over and over. I go through gin quite quickly while my vodka supply languishes sadly on the bar cart, but this could actually change all that.

Though the original recipe is great, I’m looking forward to playing around with it, and that’s really the main benefit to infusing gin this way: customisation. Instead of waiting a day and a half for everything to infuse the old fashioned way, you can make a whole bunch of small batches, tweaking the botanicals to suit your very specific and special palate.

Obviously, this doesn’t just apply to gin. Sous vide infusion is a great way to customise any spirit quickly, letting you put your stamp on any alcohol you desire. So long signature cocktails, we’ve moved on to signature spirits.