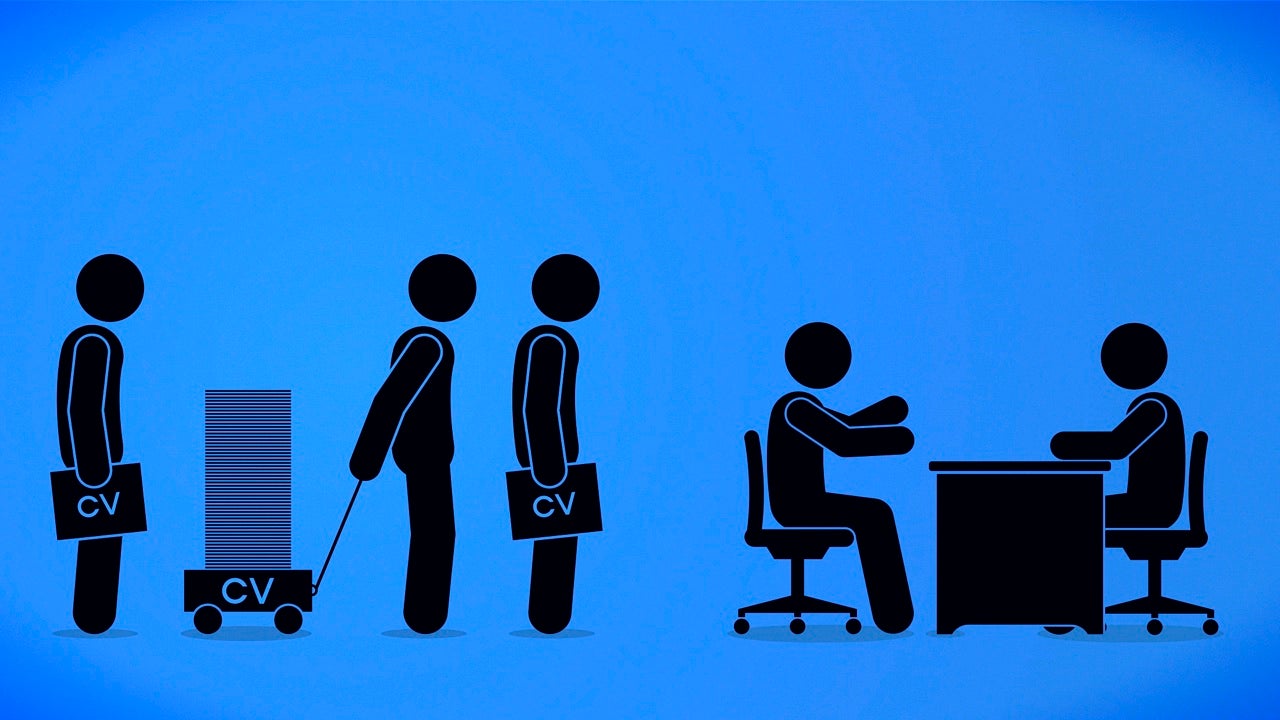 If you're anything like me, your job is not this easy to explain. And that can make answering interview questions with hiring managers overly complicated. Here are some of the most common mistakes people make when they tell people about what they do for a living — and what to say instead. This post originally appeared on The Muse.

1. You Say It Just Can't Be Explained

Trust me, I know what it's like to get into the weeds of trying to put your job description into layman's terms. And let's say your current gig involves building complex reports on the frequency with which people replace leather belts. You think it's interesting, and you know it qualifies you to do the job you're interviewing for, but with all the nuts and bolts that go into your current role, it's tempting to just say, "I mean, it's so in-depth, I think we'd both be better off if I didn't get too deep into the day-to-day." But think about this from the employer's standpoint. Would you want to hire someone who appeared unwilling to talk about his or her current job? Probably not.

It's OK to poke fun at some of the finer details of what you do, especially if you think your interviewer would get a kick out of hearing the stranger details of analysing belt-buying habits. But don't skip the question. Try using this formula instead:

My day-to-day involves [something broad about what you do], which has a big impact on how [a team you work with] approaches [something that team is responsible for].

So, if we go back to our belt-buying analyst, a good answer might look like this: "My day-to-day involves looking at buying data, which has a big impact on how our sales team approaches conversations with potential clients."

2. You Use Too Much Jargon To Sound Impressive

On the flipside, it's also easy for our belt-buying analyst to use a lot of jargon when describing her job to a potential employer. Imagine how overwhelming it would be if someone you were interviewing went on a tangent about the pivot tables that came out of your quarterly belt scrum session, which led you to believe that the buying delta of belt wearers in Alaska was much lower than it was the previous quarter. Confusing, right?

Again, be prepared with a response that clearly articulates what you do without completely confusing the interviewer. In the event that you do want to use some specific examples or go into a certain detail in more depth, be prepared to walk the hiring manager through what you're talking to. So, in the case of the belt-buying analyst, it might look something like this:

I'm responsible for helping our sales department understand how frequently buyers tend to replace their belts, so this year I led an initiative for monthly scrum meetings, in which we take some initial data that I've found and come up with some actionable next steps for our teams.

You'll notice that while this answer gets a little technical, it's still straightforward enough for an interviewer to understand. And even better, it's the perfect primer for further conversations with that person.

3. You Get Annoyed About Being Asked to Explain Multiple Times

It's human nature during an interview to think, "Ugh, how many times do I have to explain that I analyse belt-buying habits? And can we move on to why I'd make a great marketing analyst?" But, when there's a job on the line, it's important not to get annoyed at this question. Remember: Your job's not as easy to understand for an outsider, and the hiring manager needs to know you're qualified to join the team.

Here's the thing: Plenty of interviewers are aware of the fact that few jobs can be explained in a short sentence or two. So, it's only natural that they will ask a few clarifying questions around what you do for a living in an effort to find overlapping skills and responsibilities. And often times, they will be receptive to a small dose of humour before you start answering. Read the room before you do this, but if you sense an opening, feel free to preface your answer with the following:

Well, this might take a minute to explain, so I hope it's OK if I walk you through what I do, because some of it probably won't make sense at first.

Of course, edit this to fit your own unique tone, but if you're sensing that you're about to get annoyed about answering this question again, don't be afraid to lighten the mood a bit before you start describing it.

Life would be so much easier if every position in the world could be explained in five words or less. Unfortunately, that's just not the reality that most people face. Still, even if it takes you a few extra minutes to explain what you do to an interviewer, that's perfectly OK. Bonus: When you do explain your gig in an easily digestible way, hiring managers know that you're a pretty sharp person who can make complicated things much easier to understand. And who doesn't want that in an employee?