Imagine a PC in your pocket, free to carry anywhere there’s a screen you can use to get your work done. Sure, a laptop works, but a PC-on-a-stick gives you serious freedom and flexibility. The Google Chromebit and Intel Compute Stick both sell that dream pretty hard. We took both for a test drive.

Google made waves when it unveiled the Chromebit last year, and finally launched in the US a few months ago. By comparison, the Intel Compute Stick has been around for a while, but picked up some steam around the same time. They’re different products (with some big differences), but they’re clearly playing in the same space. Here’s the rundown:

Made by ASUS, the Chromebit runs Google’s Chrome OS, connects to your display (or a TV) via HDMI, connects to a keyboard and mouse over Bluetooth (4.0), and connects to the Internet over Wi-Fi (802.11 a/b/g/n/ac supported.) Once you have it up and running, you can install apps from the Chrome Web Store to get things done, and each Chromebit comes with 100GB of Google Drive space for documents, photos, and other files, since there’s virtually no on-board storage (only 16GB, in fact.) There’s a USB port for external storage or input devices, just in case. It’s powered by a Rockchip RK3288 processor, and packs 2GB of RAM. Since there’s no on-board storage and everything is web-based, you don’t have to worry you’ll lose data if you lose the device, or leave it at work when you want it at home. You can check out the full specs here.

Intel’s Compute Stick is made by Intel proper. If you’re considering one, make sure you get the 2016 model, because the 2015 model, while approachable, wouldn’t stand up too well to this showdown. The new model includes 32GB of onboard storage, has a microSD slot, is powered by an Intel Cherry Trail Atom x5-Z8300 processor and 2GB of RAM, and supports Wi-Fi 802.11 a/b/g/n/ac (compared to last year’s /b/g/n-only chipset) and Bluetooth 4.2. There are two USB ports (one of which is USB 3.0) compared to last year’s single USB 2.0 port, which is another great improvement. The Compute Stick also comes with Windows 10 preloaded. Hardware-wise, it’s pretty impressive for its size.

Those are the basics. Of course, the Compute Stick and the Chromebit aren’t the only PCs-on-a-stick available, but they’re two of the most popular, and two of the most mature. There are tons of Android sticks with ancient version of Android and an HDMI port, many of which use the same chip that the Chromebit uses, but we’re not interested in those. Let’s dive in to our comparison.

The Chromebit can also be powered via HDMI if your TV or display supports MHL (aka power over HDMI), which means you just plug in the Chromebit, switch to that HDMI input, and pair your peripherals. Once you’re paired, log in with your Google account, and you’re off and away.

It’s worth noting the Chromebit doesn’t have a power button, which means it’s always on and connected, until you unplug it. There are apps in the Chrome web store for just about everything you probably need to do — especially if your work, web browsing or social life keep you on the web — and even a few light games here or there (more on that later.)

On the other hand, the Intel Compute Stick is clearly the hardware winner here, with more powerful components and a full version of Windows on board that you can use for all of your favourite apps. That’s certainly a benefit, but it’s also a drawback. After your first round of Windows updates that take painfully long to install — not download, just install — you’ll understand why. Plus, while it has 32GB of onboard storage, most of that will be consumed by Windows and its updates. Even if you use every trick you can to reclaim some space, you’ll get some room to install a few apps, but not enough to store data. You’ll need that microSD slot. Once you muddle through all of the setup, updates, app installations, and more though, you’ll have a fully functional Windows PC, though.

Both stick PCs are tiny, and easy to slide into a pocket or a carry all. They’re more or less all you need to get things done, but if we had to deliver a portability prize, the Chromebit would get it. Chrome OS is designed to run without a ton of on-board and connected storage, and the Chromebit, even though it has a USB port, doesn’t need it. It also doesn’t need an additional power adaptor to keep the Chromebit powered up, thanks to that MHL support we mentioned, which means that at best, all you’re carrying around is the Chromebit itself. At worst, you’ll need to tote a Bluetooth keyboard and mouse with you. 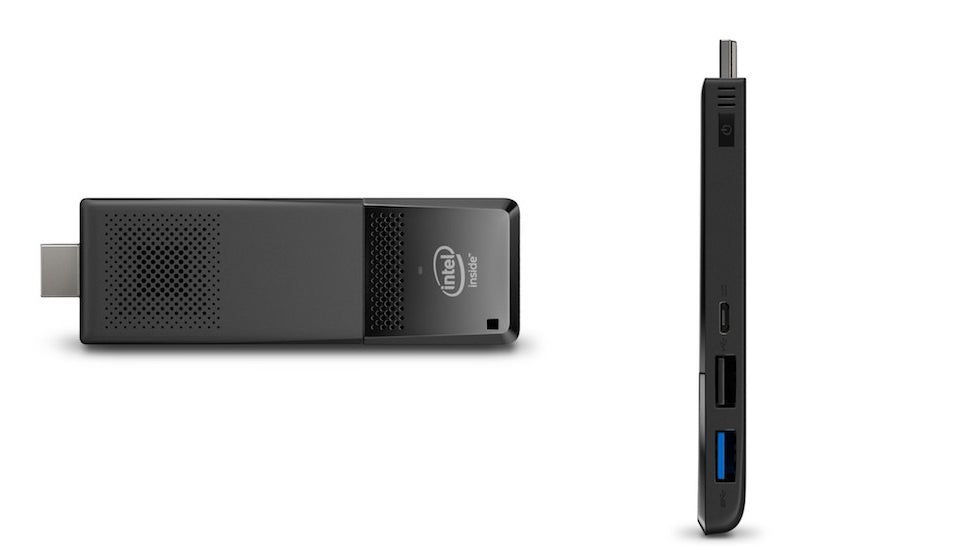 The Intel Compute Stick on the other hand is just as portable, even a little smaller. It has a power button (which the Chromebit does not) and two USB ports, which are nice to have for connected devices. However, the Compute Stick still needs an AC adaptor for power, no matter what you do. However, considering the fact that additional storage is more critical for the Compute Stick, that means that at best, you’ll wind up carrying the stick itself, an AC adaptor, and your microSD card everywhere you go. At worst, you add either a combo keyboard/mouse to that, or Bluetooth peripherals. There’s a cap for the HDMI end of the Compute Stick, but your microSD card is kind of slipped into the slot, and while it’s secure for most uses, I wouldn’t want to carry it in my pocket or anything.

As far as portability goes, if you’re travelling with either, your bag is much lighter than if you carried even the lightest ultrabook, so it may be nitpicky to compare the two this way. Where the Chromebit stands apart a bit more is in how its OS handles being portable. Google built Chrome OS to be completely portable, even between devices.

Since all of your data is stored in Google Drive and the only things your Chromebit remembers are the apps you have installed — and even those are just Chrome Web Apps — you can plug this thing in anywhere you have a display, input devices, and an internet connection, and you’re ready to go. If you lose it, it’s not a big loss, and you don’t lose a ton of data, which is huge in a portable device.

The Compute Stick on the other hand is still Windows, and while Windows is in many ways just as portable, it’s less of a connected, web-centric experience, and if you lose your microSD card, you lose your apps and data too. Hardware is great, but consider the portability of your data as well.

If you’re just reading the specs, the Compute Stick — especially the more recent 2016 model — has the edge, clearly. It packs a more powerful processor, more storage and better RAM. The Compute Stick’s extra USB port is great, especially considering it’s USB 3.0, and expandable storage is good too (even if it’s necessary): but once you put all of those features into use, the end result is one that doesn’t feel as much like the powerhouse it sounds like. In fact, the Chromebit feels a bit more smooth and snappy to use.

If it sounds crazy, it is — using both felt odd. I kept thinking that the Chromebit shouldn’t be as smooth as it was, even if it was limiting by its very nature. You play in Google’s Chrome OS garden when you use the Chromebit, and the synergy between hardware software, and the apps available is something that Google manages well. You wind up with a less useful experience, but one that works better, especially if your needs don’t outstrip the walls of the garden. 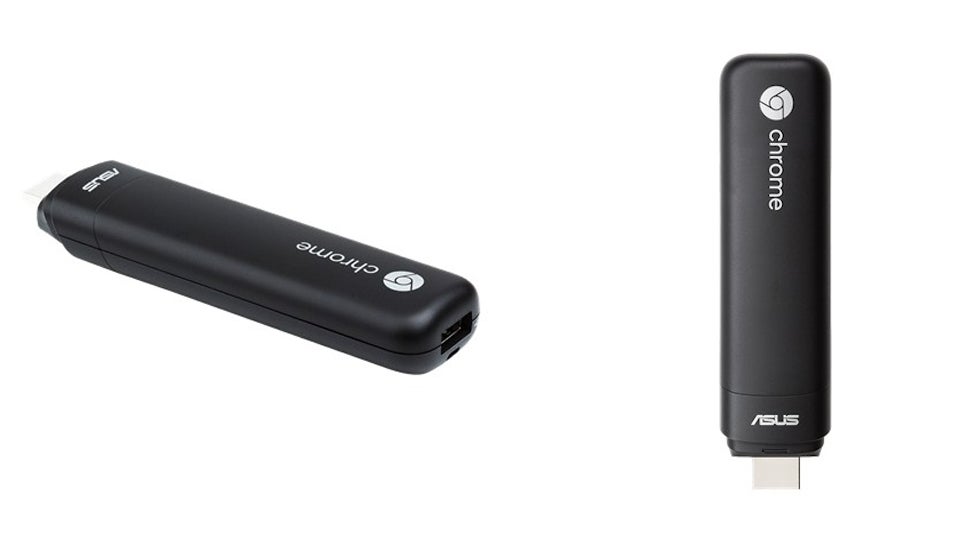 When it comes to performance, the difference in specs makes the Compute Stick look like it’s worth the money. The performance delta in use challenges that notion, and makes you wonder if you should just pick up the Chromebit and save $90.

The Verdict: Chromebit Today, See What Intel Does Tomorrow

The video above, from YouTuber Austin Evans, compares the last generation Intel Compute Stick with the Chromebit, and comes to pretty much the same conclusions I have. In short, they both have their pros and cons, but the Chromebit does pretty much the same thing in a slicker and cheaper package than the Compute Stick, and unless you need Windows — like you’re a devotee of Microsoft Office or you need to run something heavy like PhotoShop, you can probably get away with the Chromebit for everything you need to do.

If you absolutely need Windows though, the choice was made before you even read the review. With that said, anyone who requires Windows specifically for gaming needs to steer clear. The Compute Stick is way too underpowered for anything graphically intensive. 1080p video is fine (4K video not so much), so Netflix, Stan and all the rest are fine — but anything heavier? Avoid it.

If you like a Google-centric life, using Hangouts for chat, use Facebook and Twitter to keep up with friends, and even webapps like Feedly to read the news, you’ll be just fine on the Chromebit. You’ll have less to keep track of when you move around, and less to lose if something goes missing. Even if you’re looking for a cheap way to turn an old display into a PC, or get something more robust for your TV than a Chromecast, the Chromebit is a nice compromise between the simplicity of a set-top and the power of an HTPC.

That said, it’s impressive what Intel’s managed to cram into that tiny stick-sized PC, and with a few small tweaks that they inexplicably decided against with this year’s freshly-introduced version such as upping the built-in RAM and adding MHL support, they could have a near-perfect PC-on-a-stick. Sadly, the fact that they didn’t do those things means you can save yourself some money and get the same (or better) experience with the Chromebit.