The Microsoft Band 2 is a Windows-flavoured fitness wearable designed to work with Android, iOS and Windows Phone devices. It provides all the tracking options of a high-end fitness band and some of the functionality of a smartwatch. We’ve been using the product for the past two weeks and have since promoted it to our fitness band of choice — despite some foibles.

The original Band was never officially released in Australia, which makes this our first taste of a Microsoft fitness wearable. It’s a hybrid device that falls somewhere between a fitness band and a fully-fledged smart watch. While it can be used to keep tabs on emails, messages and calendar alerts, the emphasis is put firmly on tracking your fitness and well being.

The Band 2 packs in everything you would expect of a high-end fitness band. There are 11 different sensors in all, including an optical heart rate monitor, a 3-axis accelerometer/gyro, gyrometer, inbuilt GPS, an ambient light sensor, a skin temperature sensor, a UV sensor, a microphone, barometer and a sensor for haptic feedback.

This bevy of sensors allows the Band 2 to track your steps, heart rate, exercise, calorie burn and sleep quality. The heart rate monitor is especially noteworthy: unlike some lesser fitness bands, it constantly runs in the background to give you accurate readings in real time. It fails to warn you if your heart rate gets too high though — a missed opportunity.

Other noteworthy features include an inbuilt GPS — which allows you to track speed and distance without a phone — and a VO2 Max monitor. The latter estimates your body’s maximum capacity to use oxygen and is an important function for serious athletes. Such measurement tools are usually only found in fitness trackers that cost upwards of $500. There are also dedicated sensors for running, biking and golfing; handy if your fitness regime includes these hobbies.

As you’d expect, the AMOLED screen brings its own features beyond fitness tracking. These include notifications for emails, texts and calendar alerts as well as controls for external music playback. Windows Phone users also get access to Cortana, which lets you reply to text messages, take notes and set reminders via voice commands. But while it’s nice to have a built-in digital assistant, Android and iOS users shouldn’t feel too cheated — it’s more of a cool gimmick than an essential feature.

As with most fitness bands, advanced functionality and feedback is provided via a phone-controlled app. The Microsoft Health app syncs to the Band via Bluetooth and provides you with a detailed breakdown of your fitness progress via a Dashboard screen.

In addition to receiving detailed data summaries across different date ranges and exercise types, the app provides a variety of courses and workouts complete with inbuilt video demonstrations. Naturally, you can also build your own tailor-made exercise routines from within the app.

Rounding out the features is the ability to integrate data with third-party apps such as RunKeeper and MyFitnessPal. If you’re already immersed in these fitness ecosystems, being able to merge everything together is obviously a big plus.

The Band 2 features a minimalist design comprising a simple curved screen and a slate grey band. Curiously, Microsoft has chosen not to release any alternative colour schemes for this product. Sadly, the band is firmly grafted to the watch face, which eliminates any possibility of third-party accessories.

While there’s nothing wrong with the Band’s finish, it would have been nice to have a few different options to choose from. As it stands, you’re stuck with spartan functionality that borders on bland. To be fair, this design choice will be welcomed by many users. You can also customise the display’s colours and background to something a bit funkier, if that is your wont. 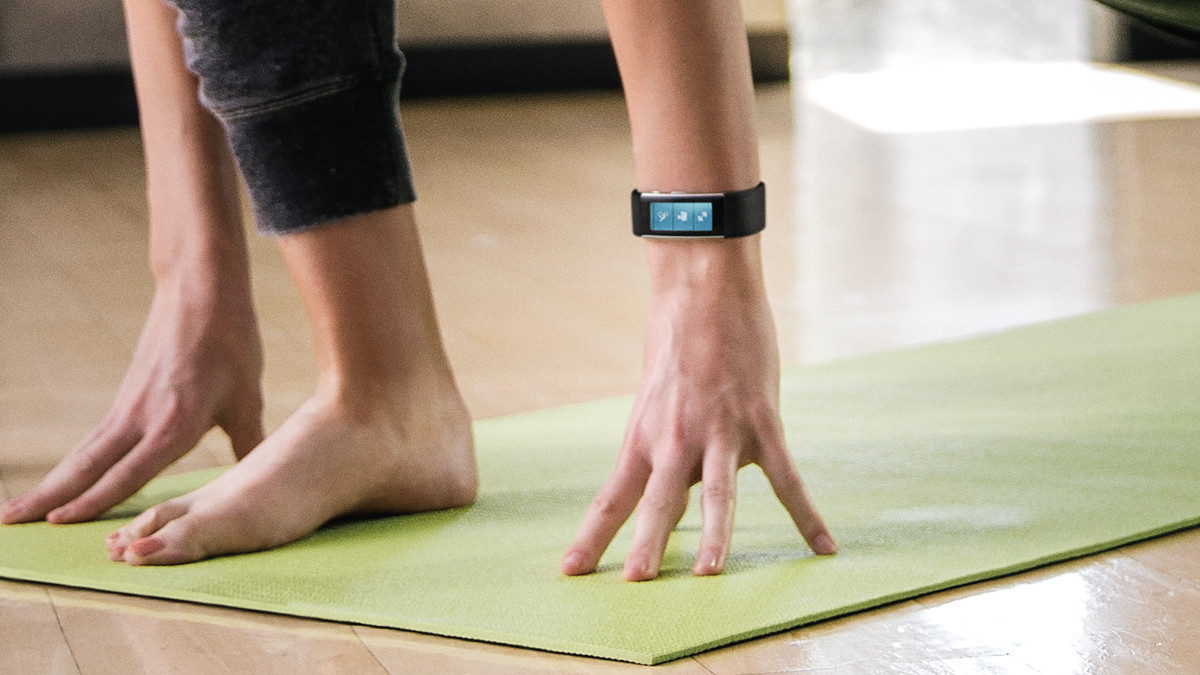 Our other chief complaint about the design is its size. As you’d expect, the Band 2 is significantly thicker than a screen-free fitness band. While this doesn’t impede exercise, it does cause this conspicuously untrendy device to really stand out on your wrist. The bulky shape can also cause problems for certain types of sleepers: whenever I tucked my arm beneath my pillow, the weight of my head caused the Band to push painfully into my wrist.

For best results, the Band requires the wearer to attach the display on the inside of their wrist, military style. Otherwise, you’re likely to get a crick in your neck from constantly tilting your head at a weird angle. While this doesn’t affect the band’s functionality, it may cause other gym goers to think you’re putting on airs.

With those caveats out of the way, we can confirm the Band 2 feels very comfortable in most situations. The silicone band sits snugly on the wrist without causing any itchiness. There are also three different circumference lengths to choose from to ensure a natural fit: 143-170mm, 163-185mm and 180-210mm. Be sure to measure your wrist prior to purchase!

During testing, the display remained easy to read in direct sunlight — which is important if you prefer to exercise outdoors. The touchscreen is attractively designed and highly responsive: you can review your day’s progress, keep tabs on notifications and set new workouts with a few finger flicks.

Of course, a fitness tracker is only as good as its corresponding app. Thankfully, Microsoft Health does an excellent job of collating data and presenting it in a way that’s easy to understand and derive goals from. The interface is fast and clean which makes it blessedly easy to move between sections. The app is linked to your Microsoft ID, which removes the hassle from moving between different devices and OS platforms. 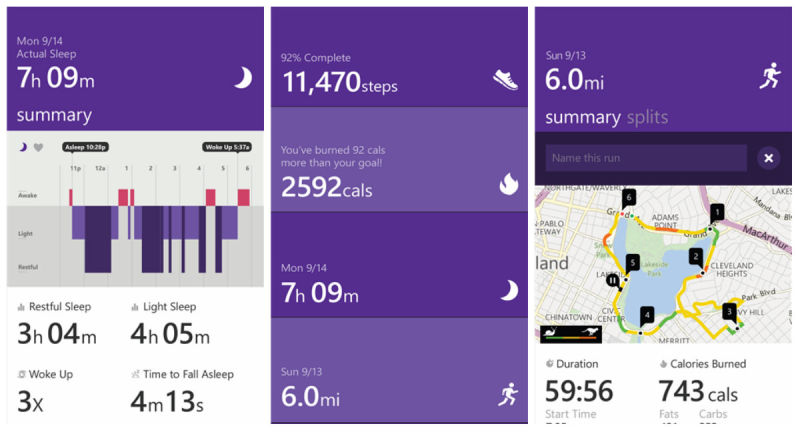 As mentioned, the app comes pre-loaded with tons of workout routines which are free to access. This is particularly handy if you’re new to exercise and looking to lose weight — you can even compare your progress statistics to people in the same age and weight group. The inclusion of video demonstrations for exercises is also appreciated: instead of having to Google exercise terminology, it’s all there to see.

Unfortunately, battery life is a bit of a letdown. Unlike screen-free fitness bands like the Jawbone Up, the Band 2 only lasts around two days between charges. This is understandable when you consider all the added functionality beneath the Band 2’s hood — it’s basically a miniature smart watch with fitness leanings. Nevertheless, this can prove exceedingly annoying and may be a deal-breaker for some people.

Compounding problems is Microsoft’s decision to use a propriety charging port in place of Micro USB. This forces you to keep careful tabs on the included cable — lose it, and your Band will become useless as soon as the charge runs out. It’s not just loss or theft that you need to worry about either: I accidentally left mine at work last Friday and couldn’t charge the device all weekend. Tch.

It should also be noted that the Band 2 isn’t waterproof. According to Microsoft, you can expose the device to ‘light’ rain and occasional hand washing, but immersing it in water will kill it dead. You’re not even allowed to wear it in the shower. Needless to say, if swimming is a major part of your exercise regime, you’re going to want to look elsewhere.

The Microsoft Band 2 isn’t the best looking fitness wearable on the market, but it does pack in more features than the majority of its trendier rivals. It will suit anyone interested in fitness regardless of their experience level. If you can overlook the exorbitant price tag and annoying battery issues, the Band 2 is a winner.