Is It Legal To Cosplay Characters You Don’t Own?

Cosplay has existed as a hobby for decades now — with most people having ‘cosplayed’ in some way or another for costumed events or parties. Now that people have started making money from it, cosplay’s legal status has been thrown into question as a practice that leans heavily on using various companies’ intellectual property.

Cosplay can generally be classed as a derivative work. As cosplayers tend to use single characters rather than complete works, and often change the medium of expression — for example, translating an animation into a physical costume or photographic representation, there is usually enough difference to avoid being classed as an outright copy.

Because cosplay is such a murky combination of fandom and profit, the question turns not so much to whether or not cosplay is legal, but whether you are actually likely to face legal action for doing it. Cosplaying for profit also takes many forms, so I’ve broken it up into the four main methods that cosplayers will use to do so: promotional appearances, photography and selling prints, selling replicas, and commissioning.

To begin with, I should specify that cosplaying as the majority of people do it — that is, making a costume and dressing up for fun with no profit involved — will never be a cause for a company taking legal action. Being non-profit means that cosplay has a great case for being defined as ‘fair use’. US Copyright law interrogates the matter of fair use based on four main factors:

Considering cosplayers only use singular characters — ie a small portion of the copyrighted work — and often can be considered to provide free marketing rather than having a negative effect on the value of the original work, it has a strong argument for fair use. Of course when money isn’t involved, it would be an extremely poor marketing choice for companies to try and sue their fans.

Even monetised cosplay videos (at least the comedic ones) would also be protected under the part of fair use that protects parody works — which is the same law that lets filmmakers profit from terrible parodies like Vampires Suck. 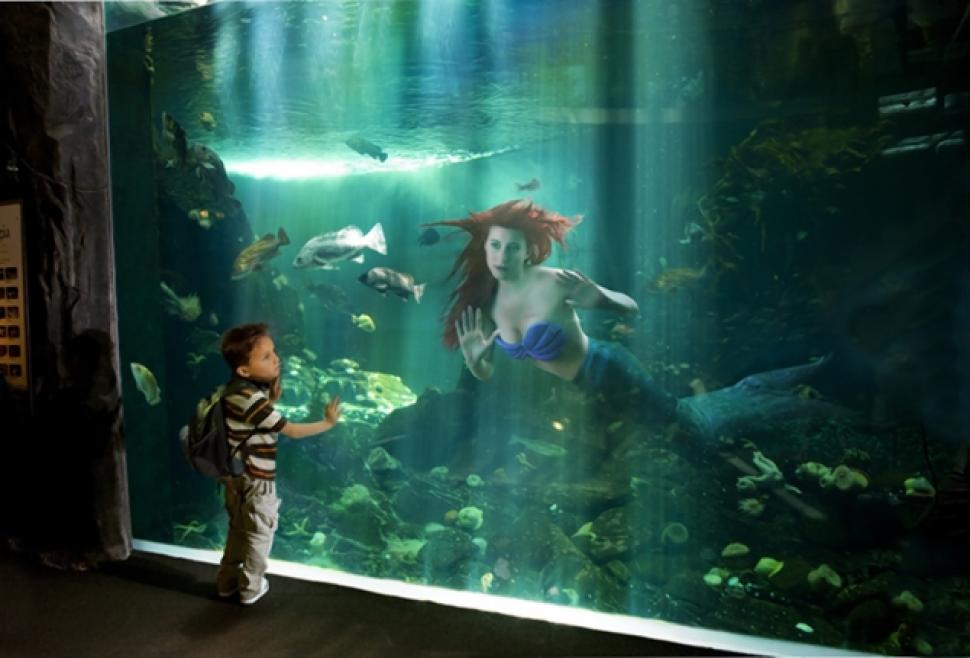 Fair use will often cover works that use copyrighted material to make a statement about the original. [Image via Dina Goldstein]

Making paid promotional appearances are far less legally questionable than other methods for cosplayers to make a profit from their art. As the cosplayers are being paid for their appearance as a personality, rather than as a specific character, it’s generally of little concern what costumes they choose to wear. The only way this could get hairy is if a cosplayer appearing at an event (for example, a store opening) was advertised as the character themselves (ie, come meet Princess Peach this Sunday!) as this would constitute commercial use of a copyrighted character.

Selling prints is a trickier issue. Many cosplayers may have already received a cease and desist after selling cosplay prints on art site Redbubble — most notably by Warner Bros and Disney. While I’ve never heard of prints on other sites being taken down for copyright reasons, selling prints is likely to be seen as making a profit off derivative works.

As companies will often sell posters and prints of their own as merchandise, it can also be seen as infringing on their ability to profit from their copyright. Regardless of whether you think you have a chance at arguing that your print is covered under fair use as a transformative work, a single cosplayer would never have a chance at fighting Disney or Warner Bros in court — if you receive a Cease and Desist, it’s best to listen.

That being said, cosplayers could still continue to make a profit off prints in the clear from any legal action — if they only sold prints of original concepts and continued to simply distribute photosets of copyrighted material without attempting to monetise it.

Selling pre-made cosplay props and costumes is also a contentious issue, as it has the potential to infringe on licensed merchandise that the copyright holder may be selling. At this point it wouldn’t even be counted as a derivative work, but a straight up copy. Even if the company doesn’t sell licensed products similar to what you are producing, you could still find yourself with a cease and desist if you have an online storefront that regularly sells such items.

While cosplay cases are few and far between (or potentially even non-existent), a number of takedown notices have been sent to various sites offering 3D printed objects based on popular geek properties like Game of Thrones and Final Fantasy.

On the other hand, a number of high-profile propmakers in the cosplay community continue to make a living from creating replica props from copyrighted works, with their clients even including the companies whose designs they are borrowing. Volpin Props is one of the most well known of these, and his only Cease and Desist to date has come from the designers of a certain iconic hotel carpet:

The matter of commissioning is quite similar to the above, though if you are publicly only offering a service (ie, sewing) rather than a product (ie, a copyrighted costume design) then you have much less chance of being picked up on copyright infringement. With many cosplays moving more and more to original designs and transformative versions, this is even less of a concern. If you are a commissioner, however, it would pay to be wary of reproducing costumes that are already available as officially licensed merchandise.

When it comes down to it, cosplay fits into the weird grey area that surrounds fandom, where it may not be entirely legal but it is often tolerated and even encouraged by creators. Even when fans are profiting from their work, they very seldom are making enough for a company to get their lawyers involved seriously. Still, if someone sends you a Cease and Desist — it’ll always be smarter to comply.

Did you just catch yourself wondering if something was legal or not? Let us know and we may be able to answer it in our next Is It Legal? feature.