How Your Food Choices Are Influenced By Outside Factors 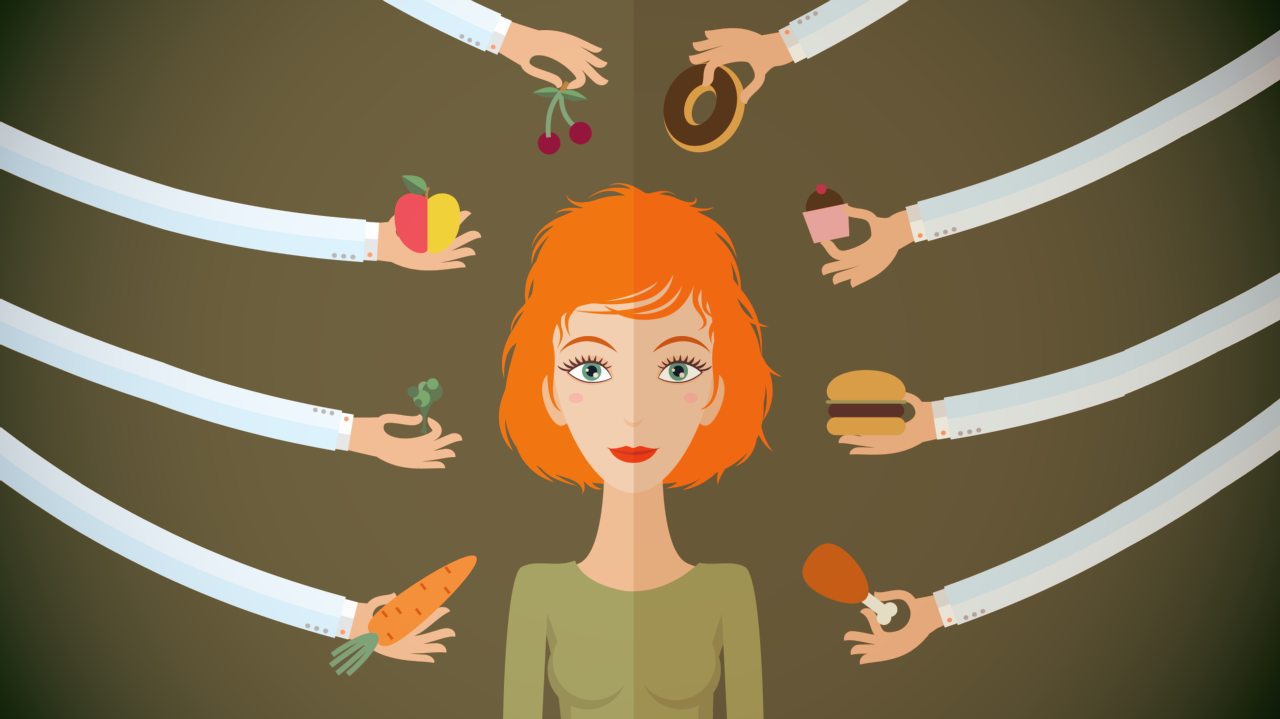 Following a healthy diet can be hard. From deciding when and what to eat to how much food you actually put on your plate, the average person makes over 200 food-related decisions each day, most of which are automatic. These automatic choices — dubbed "mindless eating" by some experts — happen when we eat and drink without consciously considering what kind of or how much food to consume. We'll keep eating from a bowl of chips past the point of fullness simply because they're in front of us. This article was originally published on The Conversation.

Even the most disciplined consumers are not fully in control of what they eat. Studies have shown that decisions such as when, what and how much to eat are often shaped by subtle forces outside of our awareness or direct control. These environmental forces can cause us to overeat by taking advantage of biological, psychological and social and economic vulnerabilities. This helps explain why two billion people worldwide are overweight or obese, and why no country has yet been able to reverse their obesity epidemic.

There's hope. Research has shed light on the major forces that encourage overeating, including biological, psychological, social and economic. Now that we know more about them, we are in a better position to intervene.

How Biology Influences Our Appetites

Why do humans tend to crave items like chocolate over salad? Taste preferences such as a "sweet tooth" are innate to human biology, and they can change over the course of our lives. Children, for example, have a stronger preference for sweet foods than adults do.

The modern food environment has introduced an influx of processed foods filled with sugar, fat, salt, flavour enhancers, food additives, caffeine and so on. These ingredients are manipulated to try to maximise our biological enjoyment of them and satisfy those innate taste preferences.

For instance, research is finding that certain highly palatable foods, like a chocolate milkshake, can trigger brain responses that are similar to people's reactions to addictive substances, giving new meaning to the idea of a "sugar high".

But processed foods are also frequently stripped of components such as water, fibre and protein that cause us to feel full, making it difficult for our bodies to regulate food intake and maintain weight.

In addition to our biological enjoyment of highly processed foods, there's a lot to love about them psychologically. From McDonald's Happy Meals toys to Coca-Cola's global "Open Happiness" marketing campaign, examples abound of the link between food and pleasure.

Companies spend billions of dollars marketing foods to create strong, positive associations with their products. One study found that children actually think the same food tastes better when it is adorned with a cartoon character like Dora the Explorer or Shrek.

There are also lots of small ways our environment can promote overeating. People eat more when served larger portions, regardless of how hungry they are. Unhealthy foods are also very noticeable and desired because they are everywhere — in schools, restaurants, convenience stores, supermarkets and vending machines. They have even infiltrated stores selling office supplies and home goods.

The places where we make many of our food decisions can be overwhelming for busy consumers (there are 40,000 different products in a typical supermarket), and most psychological cues in our environment signal us to eat more, not less.

For example, large portion sizes, food prices, the placement of food items in stores and promotional strategies to market foods all affect our dietary decisions on a daily basis. Consider portion size alone: Drinking Coca-Cola in the 1950s meant consuming a 170g glass; today the 7-Eleven Double Gulp available in the US is roughly 10 times that size and contains nearly 3350kJ.

But for food, out of sight often means out of mind. Google provides free snack foods for employees, and found that employees were eating too many M&Ms. So they placed the M&Ms in opaque containers and made healthier snacks more visible.

Simply placing M&Ms out of sight from the 2000 employees in the New York office meant they consumed 3.1 million fewer calories in just seven weeks.

Your Environment Influences What You Eat

Unhealthy foods are often inexpensive, making them especially appealing to those on a tight budget. But fast food and ready-to-eat convenience store items are also widely available and quicker and easier to prepare than home-cooked meals, which makes busy consumers vulnerable to overeating them. Food companies also engage in targeted efforts to market to certain groups. For example, recent reports have shown that soft drink companies are increasing their spending in the US on targeting black and Hispanic youth, a concerning strategy as these groups have greater rates of obesity.

The good news is that public discourse about obesity and policy-making is starting to reflect science. The public and policymakers are realising that health issues like obesity and its related chronic diseases are not just about people's individual food decisions. People are prone to over-consume unhealthy foods because our current food environments exploit biological, psychological and social and economic vulnerabilities, undermining people's ability to be personally responsible for their food choices.

Because weight loss programs often lead to limited weight loss that is difficult to maintain, bolder efforts are needed to prevent overweight and obesity in the first place. Fortunately, policy-level interventions are being introduced.

In the US, the Food and Drug Administration will require large chain restaurants to list calorie content on food menus in 2016 and it has proposed adding a Daily Value for Added Sugars on food labels to limit consumption.

The FDA has also taken action to remove harmful trans fats — which increase the risk of heart disease — from processed foods.

The US, United Kingdom, Peru, Uruguay and Costa Rica have all enacted policies to remove "junk food" from public schools (out of sight, out of mind). Mexico recently enacted a one peso ($0.11) per litre tax on sugar-sweetened beverages to curb its obesity epidemic. Berkeley, California passed a US$0.01 per ounce excise tax on sugar-sweetened beverages in 2014 and expects to generate $US1.2 million from it this year.

Chile and Peru have banned toys in Happy Meals. McDonald's, Wendy's and Burger King all dropped soft drinks from their children's menus.

These are important first steps in tackling the obesity epidemic, and more research is needed for us to understand which interventions will work best. Innovative policies are needed to change what and how much we eat, alongside voluntary efforts by the food industry to make healthier choices easier and more desirable.

Hungry? Food choices are often influenced by forces out of your control [The Conversation]