Federal Election Voting: What Happens if You Have COVID on Election...

How To Take Your Timeline Back From All Of Twitter’s Weird Changes, Ads And Promoted Tweets

Twitter has been on a tear making a ton of changes that its users never asked for. From today’s new “best of” module, to promoted tweets and “while you were away”, it’s all cruft to someone who just wants a clean stream to read. Here’s how to take your timeline back. Illustration by Jim Cooke.

On the one hand, we can’t blame Twitter for making these changes. Some of them are actually useful; I know a few people who really like “while you were away” for example, and some people might like “best of”. It’s certainly not the “totally rearranged algorithmic Facebook-style feed” many were terrified of.

Still, the company has notoriously never made a profit, so they need to woo those sweet marketing and ad dollars, and the only way to do that is to sell your eyeballs in every way possible that won’t make you abandon ship. That’s their prerogative, and if they’re successful, you get to keep using the service you know and love. That doesn’t mean you can’t control what you see, however.

Learn Where The New Features Are, So You Can Opt In Or Out

Twitter’s new “best of” feature, the one that’s totally not an algorithmic, reordered timeline, but that few are happy about (except brands, they’re ecstatic) is currently opt-in. That’s great! You can (and should) try it to see if you like it. But it won’t be opt-in forever.

Twitter has said that “over the next few weeks” they will roll it out to everyone. Right now, that means you can ignore it and go about your life, but in a couple of weeks, you won’t have that luxury. So when it switches from opt-in to opt-out, here’s how to enable or disable it if you dislike it. And you might not! You never know.

Head to your account settings page, scroll down to “Content” and toggle “Show me the best tweets first” on or off. (While you’re in there, head to your security and privacy settings and make sure “Tailor Twitter based on my recent website visits” and “Tailor ads based on information shared by ad partners” are set the way you like them. Personally, I prefer them off.) On mobile, open Twitter’s settings, tap “Timeline” then toggle “Show me the best tweets first” either on that screen or under “Timeline personalisation”.

Use TweetDeck on Your Desktop 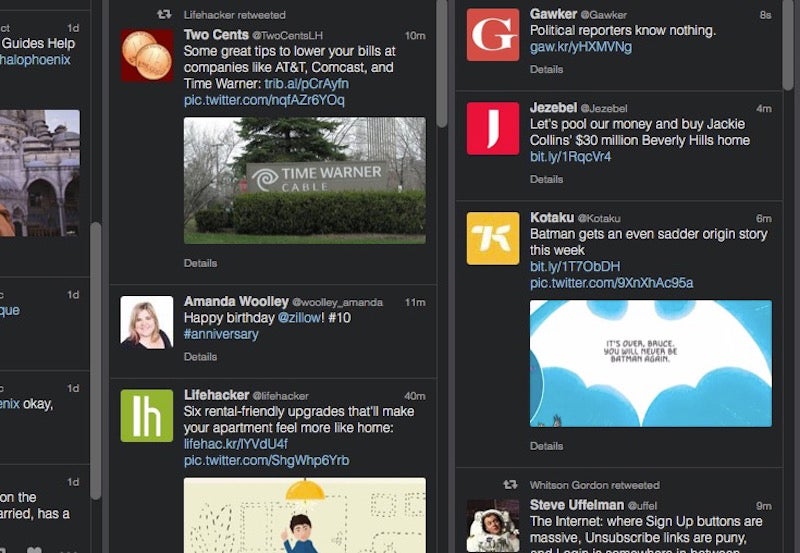 If you want the best possible Twitter experience on the desktop, your best bet is to download TweetDeck for OS X or Windows. Twitter makes it comically difficult to find (and has asked sites like CNET to remove their downloads, which means the desktop versions may not be long for this world), and really wants you to use the TweetDeck webapp instead. Still, here are a couple of links good at the time of publishing:

For really old versions, you can head to OldVersion.com’s TweetDeck repository, just keep in mind that the older the version, the more likely it will ask you to sign in with an old “TweetDeck” account that won’t work, so don’t go too old.

For Mac users downloading from the app store, we’d suggest backing up the current version of your Twitter app (should be in your Applications folder) just in case you prefer it, or it gets pulled entirely in favour of the official Twitter app for Mac.

Worst case, you can always try a third-party desktop Twitter client, like Tweetbot for Mac ($14.99) or Tweetium ($3.69), then a gross subscription to unlock additional features) for Windows. Linux users have lots of awesome, free choices though. 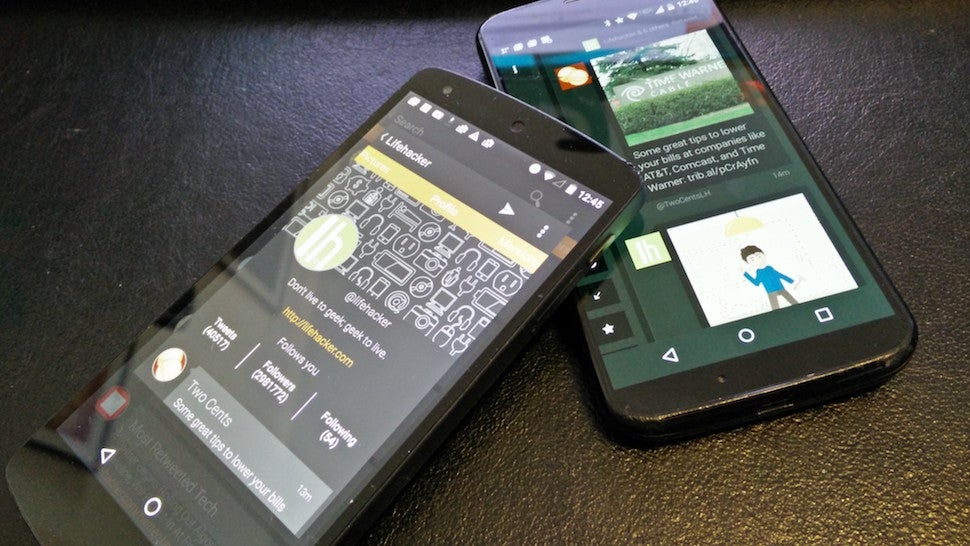 Speaking of third-party clients, many of us read Twitter on the go. The best way to make sure your stream is unpolluted and just the way you like it is to use a third-party Twitter app there, too. We have our favourite picks for iOS (Tweetbot, $14.99) and for Android (currently the $US2-$US4 ($3-$6) Falcon Pro) but Fenix ($7.87), Plume (Free), and Talon ($5.64) are all awesome Android alternatives, among the others listed here.

The benefit to using a third-party app is that you get a clean stream, or one based on filters offered in the app. Most importantly, that stream usually comes free of ads, “promoted tweets”, “while you were away”, (which admittedly, many people like) and yes, “best of”. They’re almost always a better reading experience, and more like what you probably signed up for in the first place.

The drawback though is that when Twitter tightened its API so much that it killed third-party clients, it made it difficult to build good Twitter apps. Even the best have to charge money to funnel in users slowly, based on who’s willing to pay. That helps them avoid Twitter’s infamous token limit, which when reached, cuts them off cold from any new users. For you, that means you’re out between $5 to $15 for an app that could hit the limit tomorrow. You can still use it, but without new users and income, the dev may walk away, or stop updating the app. Or you could spend nothing, use the official apps, get all the features natively and deal with the ads and bloat. Ultimately you have to choose — I use TweetDeck and third party apps just for that kind of control, but I know plenty of people not willing to spend money on something like Twitter.

Clean Up Your Timeline, so Even Twitter’s Weird Suggestions Are Good Ones

Finally, even if you opt to use the official apps and deal with the bloat, your best bet is to fine tune your timeline so only the stuff you actually want to see gets floated to you.

That means unfollow all those brands and random companies that you’re only following in case you need to DM them for customer service or support (but maybe add them to a list so you can follow them when you need them). Follow people and pages you find interesting and informative, and trim out the noise that will eventually be retweeted into your timeline anyway, like “breaking” news accounts or those viral image accounts that are all hoaxes anyway. Think of all of your follows in terms of how happy you would be to see them plastered at the top of the screen as soon as you log in, and judge accordingly.

Similarly, make good use of Twitter lists for things like news, current events and mini-communities you want to follow but not necessarily be a part of. That way you can interact with people and read news stories without them being all over your main timeline.

Finally, clean up your Twitter apps and permissions too on this Twitter account settings page. It’s just good security and privacy hygiene (since ancient, abandoned connected apps are prime targets for timeline hijacking), but it also helps keep the number of companies and fluff associated with your account that Twitter might think you want updates on to a minimum.

Once you’re finished, you’ll be in a good place to actually make sure whatever Twitter decides is the “best of” your timeline is actually something you’d want to read, and not a glorified advertisement. Combined with third-party apps and good filtering, and you can make sure your timeline is filled with interesting things you want to read from people you want to talk to.