Cuddle Clones Are Plush Replicas Of Your Favourite Pets 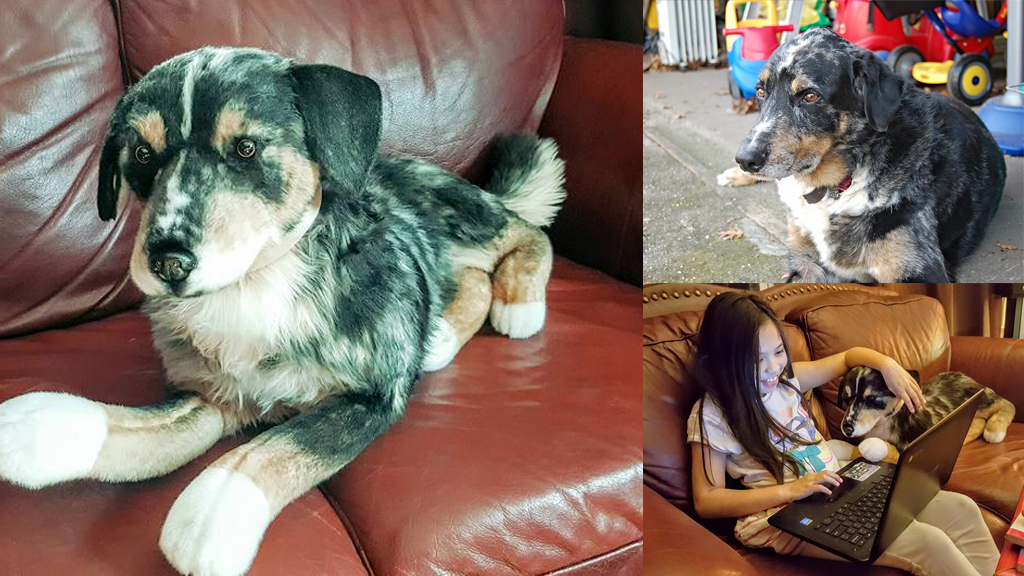 Every time I see this stuffed animal made by Cuddle Clones, I do a double take. It's the spitting image of my dead dog. Creepiness factor aside, this custom-made stuffed animal has been healing for my family and has helped keep the memory of our favourite pet much more vivid and tangibly alive. Our friends at Gizmodo mentioned Cuddle Clones early last year, and when I read about them I thought these stuffed animals are a brilliant idea. You upload photos of your pet, customise a few options and add remarks on distinguishing features.

The company then creates a plush replica, delivered to your door in about two months. It can be a dog, cat, horse, guinea pig, rabbit or "other" animal, which include pigs, ferrets and even cows. For the smaller animals, they're about life-size, but bigger animals range in length between 33 and 51cm. It's a "mini me" of your pet! However, it's pricey — $US179 ($252) to $US249 ($351), depending on the weight of your pet. I mean, it's a stuffed animal — and not even a life-size pegasus stuffed animal you could ride.

I didn't think about Cuddle Clones again until one morning when I found my daughter sobbing uncontrollably, crying for her dog, her friend. Buckley was almost 11 when he died, which is old for Catahoulas, but she was only about four years old when he passed away. It's been several years since he died, and my daughter was still taking it hard. She'd make up stories about him being a ghost dog that followed her around and kept her company at school. Even worse: We were told by her allergist that she should never have another dog because she has asthma, and her blood tests showed severe allergies to dogs. Although the way she was feeling and trying to cope was totally natural, it magnified my and my husband's own pain. He was our first, big baby, a gentle giant (that's his photo and Cuddle Clone in the title image above).

So I showed her the Cuddle Clones site and made a deal with her: We'd pay for half of it if she would save up and pay the other half. I was trying to gauge her real interest in having this stuffed animal clone, rather than offer her a flimsy consolation to brush aside her grief for the real pet. She immediately raided her piggy bank, and we went online to place the order.

During the ordering process, you select your pet's breed (the dropdown lets you select from Affenpinscher to Yorkshire Terrier or Other/Mixed), enter its weight, upload photos and choose customisation options, such as if you want the stuffed animal to be standing, sitting or lying down. You can also choose ear positions and eye colours for both the left and right side, tail position, and mouth options (no tongue, closed mouth with tongue, open mouth with tongue).

The form offers guidelines for adding photos. We sent just a front photo and a side one. 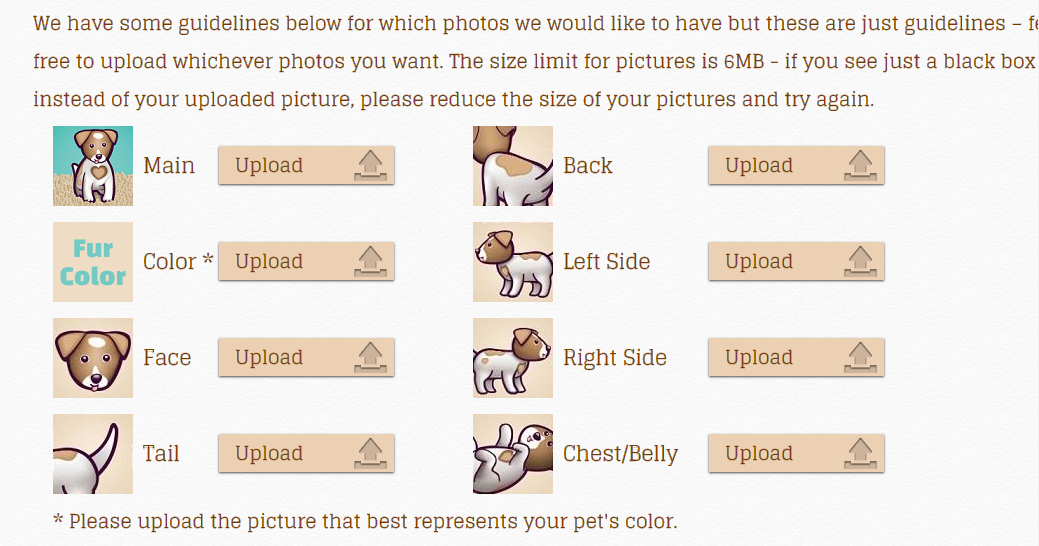 There are three fields where you can explain up to three physical characteristics you want to point out and upload additional photos to illustrate them as well.

The company says typical orders take about two months to process, but mine took five months from order date to delivery. That wasn't really a surprise as much as it was an eternity for a kid to wait, since their online order form shows you their estimated delivery date based on when you order. At the time of this writing, it's April 2016 if you place an order in February.

It was worth the wait. I was expecting the stuffed animal to look like Buckley, but I didn't imagine it would look so much like him. It's so realistic that when I opened the box and first saw him, I almost burst into tears. I couldn't stop looking at it throughout the day. Our dog had a very distinctive look, with streaks of grey, white, black and brown for his coat. There's no stuffed animal we could've bought in a store that would have looked just like him. The Cuddle Clones version, on the other hand, is impressive in its attention to detail and accuracy. It's like the company carefully stitched in each piece of fur (not really fur, but synthetic fabrics, such as acrylic and polyester) to match our dog's patterns. The company says they also use water-based airbrushing techniques for certain colour effects. I do wish its eyes were a lighter colour to match our dog's amber eyes, but aside from that, the stuffed animal captures his essence.

And the thing is huge. It measures almost 90cm from front paws to tail — about the size of our dog when he was about a year old. Cuddle Clones' FAQ says dog and cat sizes measure between 33 and 43cm, so I guess we got lucky. It's not like your typical floppy stuffed animal. It's sturdier and holds its form when you pick it up and move it. It's a stiffer stuffed animal than you might be used to — more like a foam form covered with soft "fur" than a pillowy pet. You can't just toss it in the washing machine, either, but have to dry clean or spot clean it.

Sometimes my daughter lies on it like it's a pillow (much as she did with our dog). Sometimes she uses it as a tablet holder: 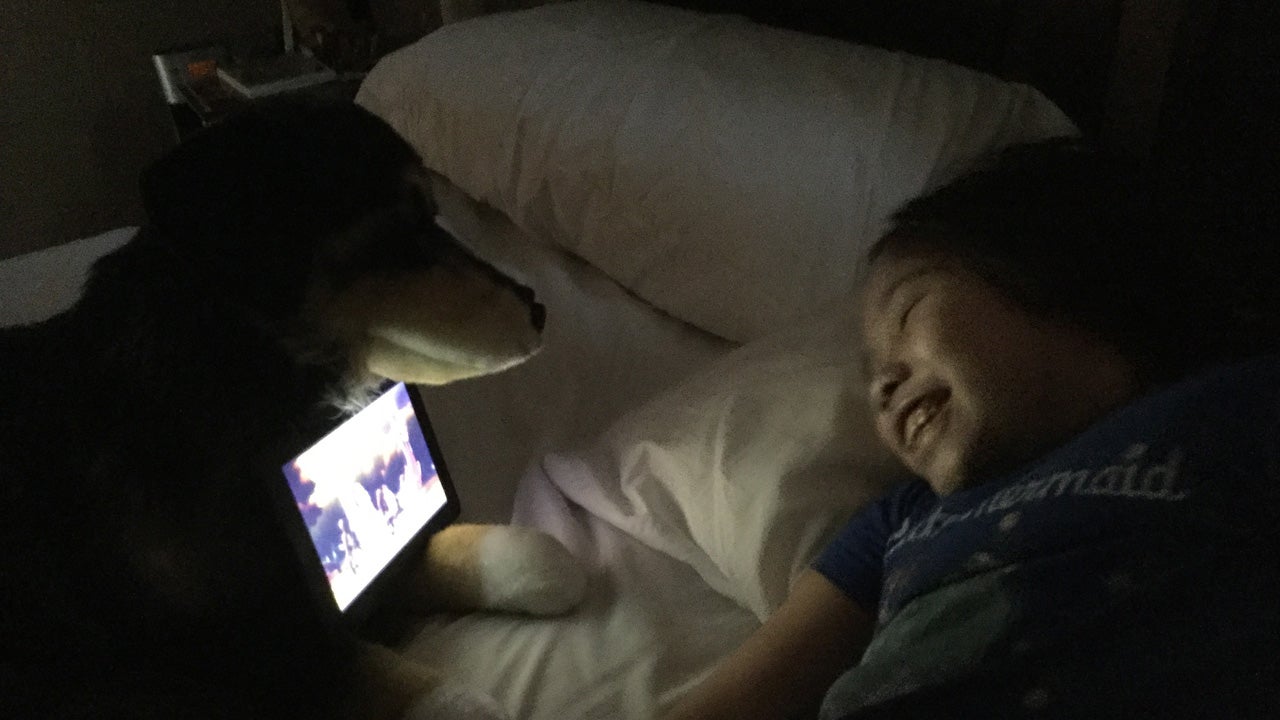 Mostly she's just ecstatic with her purchase. Although a stuffed animal can't replace a real pet, just as a doll or photo couldn't stand in for a person, it is sort of like a pet to her. One of the earliest things she said when she got the stuffed animal: "Buckley Jr. is the best gift ever, because I'll always have it and he'll never die."

I'll admit the toy still creeps me out sometimes. It's not as creepy as, say, getting a deceased pet taxidermied, but the first couple of weeks, I had to hide him to avoid the shock of seeing my old dog lying on the couch, looking at me and immobile. I'm still tricked into thinking it's him. At the same time, this stuffed animal makes me recall our old dog with great fondness, and the joy this stuffed animal brings my daughter is priceless. Even though Cuddle Clones are stuffed animals, I don't think they're just for kids either. Anyone who's lost a beloved pet knows what it's like to lose a family member.

You can see other examples of Cuddle Clones in their photo gallery, but here are just a couple more: 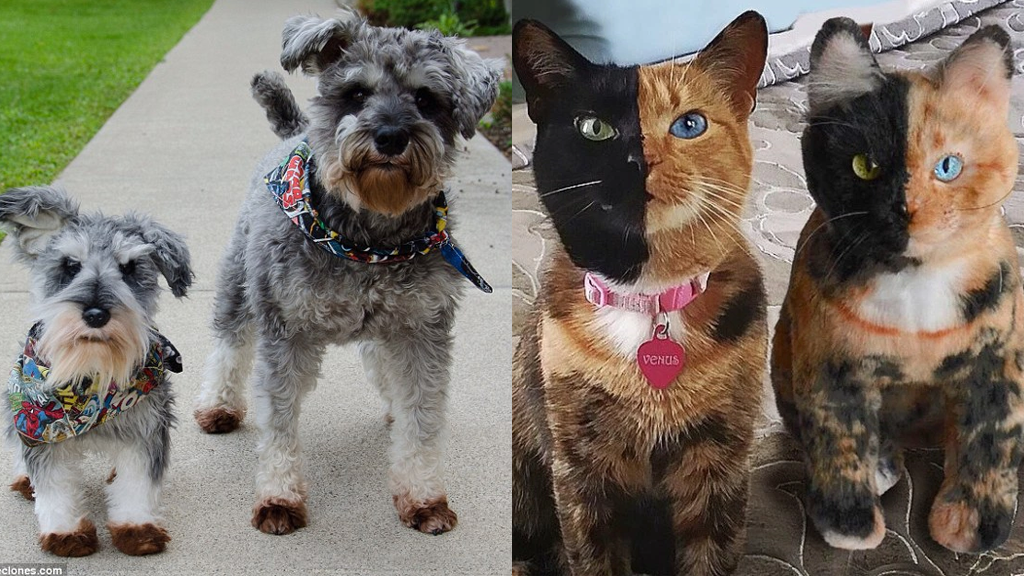 If you're not happy with your Cuddle Clone, you can return it within 30 days of delivery and have them remake it at no additional cost, or request a refund minus a $US50 ($70) customisation fee. The company donates a portion of each purchase to pet-related causes, such as Bialy's Wellness Foundation, which helps animals with special needs, and Florida-based animal rescue group Friends for Animals Sanctuary.

Cuddle Clones might not be for everyone and it's a significant purchase, but if you have a unique-looking pet, you can have a one-of-a-kind stuffed animal to match.

Sarah Basford 20 Feb 2020 3:30 PM
In schools, Australians learn there are six states in the country with two territories, which are basically states — the Northern Territory (NT) and Australian Capital Territory (ACT). In the shadows, brushed aside by the nation's textbooks, however, is a little known third territory rounding out that internal territory count to three. It's Jervis Bay Territory, and it has a complicated history.