Career Spotlight: What I Do As A Radiologist 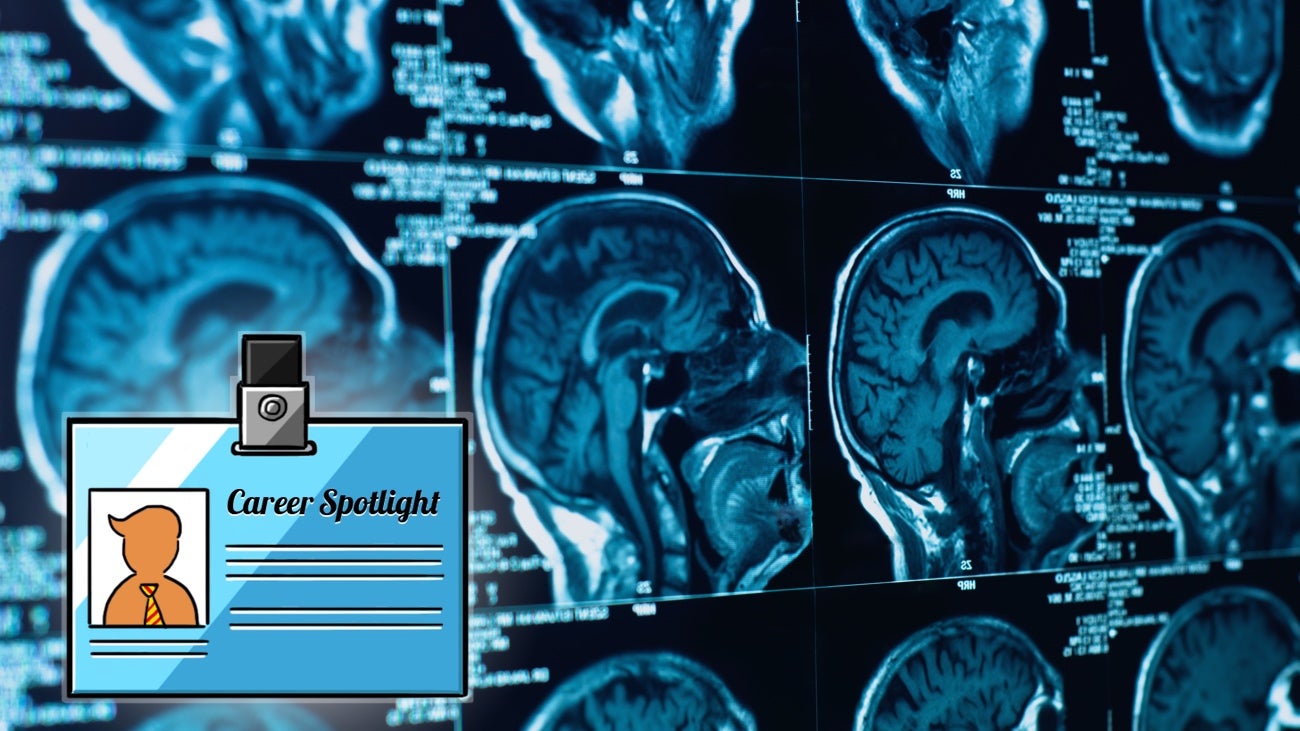 When you stop and think about it, it's amazing how thoroughly we can examine the inside of the human body with noninvasive techniques. X-rays, MRIs and CT scans are essential tools in diagnosing patients, and it takes specialised radiologists to put those imaging techniques to use. Photo by Oliver Sved (Shutterstock).

To learn a little about what it means to be a radiologist, we spoke with Associate Professor Frank Gaillard. Dr Gaillard is a neuroradiologist at the Royal Melbourne Hospital, specialising in brain and spinal cord imaging. He also runs an online educational resource, Radiopaedia.org, which collects radiology cases for doctors and students to reference. He says radiologists are sometimes called the "doctor's doctor", as they're often sought out by their peers to help offer interpretations of scans.

First of all, tell us a bit about your current work and how long you've been at it.

I have two intertwined parts to my current work. On the one hand I am an academic consultant neuroradiologist (a radiologist who specialises in imaging of the brain and spinal cord) at the Royal Melbourne Hospital in Melbourne, Australia. I have been in this department as a consultant (in the USA this is referred to as an attending) for 5 years, after having trained in Australia and Canada.

I am also the Editor in Chief and founder CEO of Radiopaedia.org, the largest collaborative radiology resource available, which I founded 10 years ago.

What drove you to choose your career path and how did you go about getting your job? What kind of education and experience did you need?

I pretty much stumbled into both medicine generally, and more specifically radiology. When I was a boy of say 13 years of age I thought cutting open someone's skull sounded fairly awesome, and so I started telling everyone I was going to be a neurosurgeon. I have always been fairly scientifically inclined (read: geek), and as medicine required the highest marks for admission, I worked on the principle that if I didn't like it I could always swap "down" into something else. I didn't really reconsider the 'cutting heads open sounds cool' career choice for another 14 years (finished high school, six years of medicine at university and three years as an intern/house-medical-office), where I found myself at the start of neurosurgery training.

One month into my first year of neurosurgery I realised it wasn't for me. Not because it isn't awesome, but because I found the operations long and boring. I had not taken into account my extremely short attention span. Four to 10 hour operations were unbearable, and I knew that I would make a lousy surgeon. So I set my screensaver to count down to the end of the year with over 300 days to go, and pondered what on earth I could do next. I was going out with a wonderful woman, now my wife, who was also medical and who was planning to become a radiologist. I had never really thought of radiology as a career path, any more than pathology or taxidermy. But then, having gone down the surgical path for so many years, and having fallen completely out of love with the idea of cutting and stitching, I thought, "why not?"

I was fortunate enough to get a position at the Royal Melbourne Hospital radiology program, and quickly found that what I had all these years mistaken for an interest in operating on the brain, was actually an interest in the pathology of the brain, and so naturally gravitated to neuroradiology.

What kinds of things do you do beyond what most people see? What do you actually spend the majority of your time doing?

I spend most of my time sitting in a fairly dark room in front of a computer with three high-end monitors looking at MRI scans of people's brains. In some cases I am looking for something abnormal that may account for symptoms (for example headaches). Many other times the abnormality is obvious (for example a mass or lump) trying to work out what it is; is it a tumour or an infection? If a tumour, what kind of tumour is it? What other parts of the body may be involved and need to be examined?

We perform scans as follow-up of known and treated conditions, to see if therapy is working. For example, has the brain tumour that was resected two years ago come back?

Radiologists are also sometimes known as the "doctor's doctor" as we are often sought out by other clinicians not only for our interpretation of scans, but also for how we think these scans fit into the overarching clinical scenario. We run numerous multi-disciplinary meetings where many specialties (in my specialty, a typical meeting would include neuroradiologists, neurosurgeons, neurologists, neuropsychiatrists, neuropathologists) discuss difficult or interesting cases.

The other major component of my work is teaching and supervising our trainees, who will typically interpret scans on their own and then we will go through a whole list of them together, checking that I agree with their interpretation and teaching where appropriate. In this sense, subspecialty medicine is still very much an apprenticeship.

The greatest misconception is that we don't exist. Much of the public, due to TV shows and clinicians themselves, are under the impression that scans are obtained by technicians (that is, radiographers) and interpreted by the clinician directly (that is, a neurosurgeon or neurologist). Although it is certainly true that clinicians look at their patient's scans, and in many instances are able to interpret them correctly, all the good clinicians I work with rely on our interpretation as the gold standard.

What are your average work hours? Typical 9-5 thing or not?

Full time is 40 hours a week, roughly 8 until 6, but it varies from hospital to hospital. Full time for us is four 10 hour days a week, with weekend and on-call requirements. I work only 75 per cent of the time at the hospital (three days a week) with the rest of the time at Radiopaedia.org, where I direct a team of developers (at Trikeapps.com) in building our new features and so on.

The very nature of radiology is episodic. Each study takes a variable amount of time to interpret, depending on whether it is a chest X-ray or a complicated MRI. Some only take a few seconds, others take up to half an hour. In my specialty, most I guess are between the five and 15 minute mark. As a result the temptation to try and multitask is fairly strong and limiting distractions is essential. I try and not have my Gmail account or any other interruptive page open while I work; [instead] I check my email only a few times a day. We use voice recognition with many templates for common reports, which also helps.

What do you do differently from your peers in the same profession? Well, this might not apply to medical professions since your peers are working towards the same goal!

Yes, this is tricky. I think I do a couple of thing routinely which I think are essential but are not done as much by many colleagues, especially those in private practice where the time pressure is clearly different. The first is that I record almost all my predictions (for example I think this lump will turn out to be a glioblastoma [a type of brain tumour]) and how confident I am about this.

I use Quick Encrypt chrome extension and record my prediction in PredictionBook.com (predictions are kept private too) to ensure complete patient privacy. PredictionBook allows you to add not only a prediction and confidence level but also an email trigger for "you should be able to know if you are right now" date... This means I can quickly look up the histology and find out if I was right.

I also collect cases and publish them on Radiopaedia.org. We are fortunate to have a great IT team in our department and they have used the Radiopaedia.org API to build an uploader which makes it easy to upload completely anonymized cases. Over the years I have amassed over 3000 cases which are freely available for others to learn from or teach with.

I don't really have a terrible part of my job; lucky me. I think interruptions are probably the biggest frustration, however it is difficult to exclude interruptions without also excluding time critical interactions with clinicians that help them manage their patients.

Radiology in general, and neuroradiology specifically (at least for me) is fascinating, with so much to know and so many new discovery occurring every year, that complete mastery is an impossible but tantalising goal. My work with Radiopaedia.org also allows me to share my knowledge with colleagues around the globe, many who work in countries with far less fortunate medical system than Australia.

What kind of money can one expect to make at your job?

Income is extremely variable for radiologists (or doctors generally) depending on where you work (private versus public, city versus rural) and the kind of work you perform (interventional versus diagnostic). As such it is hard to put a number on it. I guess, and don't actually know, that we earn similar amounts to many other physicians.

Is there a way to "move up" in your field?

As an academic radiologist "moving up" is based on publications and research grants, eventually becoming Associate Professor and then Professor, but at least in my practice this does not have any financial implications. One can go into administration and become head of a department.

In private there is much more scope for entrepreneurial activities; setting up your own practice that employs other radiologists and so on.

Go for it. It is the best decision I ever made. I thoroughly enjoy my work and think that I can actively make the world a little bit better, both locally (the patients I help by interpreting their scans) and more widely by teaching the next generation of radiologists in Melbourne and in other countries through Radiopaedia.org.