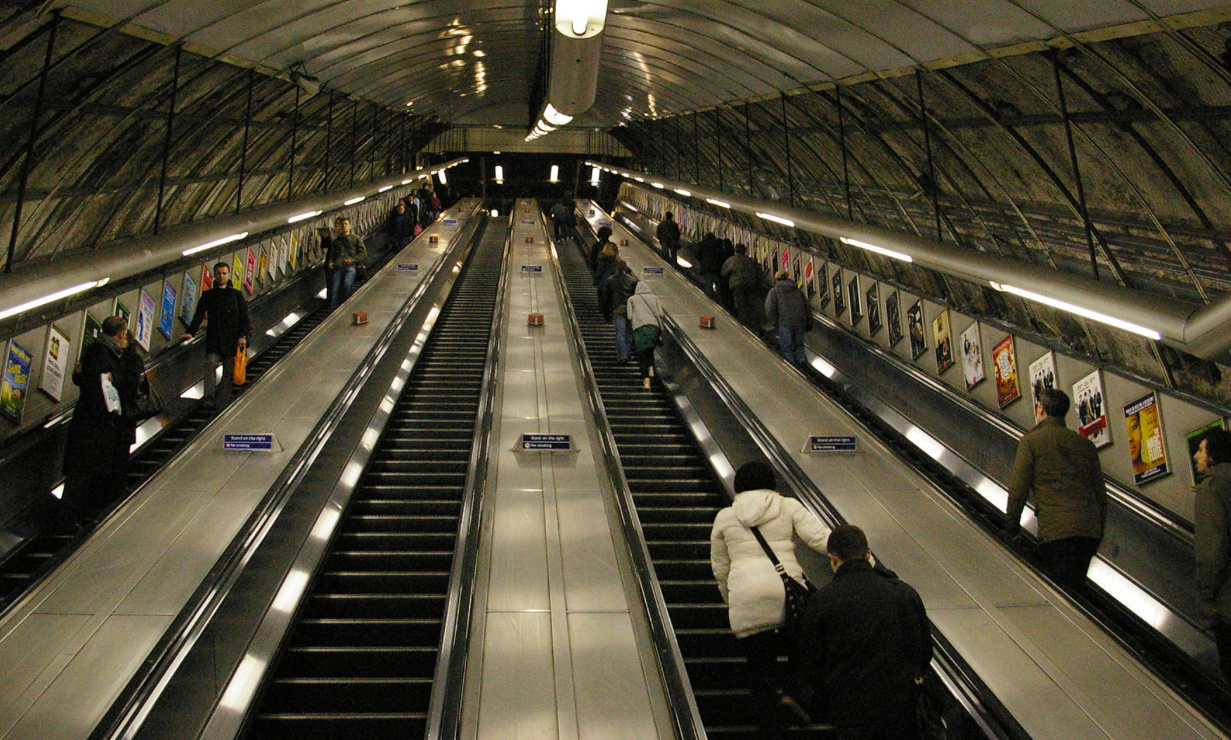 It's the golden rule of crowded escalators: Stand on one side, walk on the other. But passengers taking the escalator in one of London's busiest tube stations were recently confronted with a weird rule: Everyone must stand. Officials claim it will make stations run more efficiently. But how?

The head-smacking logic was explained in detail by The Guardian this weekend. I'll admit, it still doesn't totally make sense to me, but there's the rationale.

Transport for London is seeing record-high numbers of passengers, which leads to some stations (namely the older, more antiquated ones) becoming overwhelmed with bodies during rush hour. Escalators naturally create bottlenecks when all those people are squeezed into narrower paths, so you'd think that it would improve congestion for the faster-moving people to go ahead and slip past the slower-moving people.

But no no no! It actually all comes down to two factors: How many stairs passengers need to climb (or descend), and how many passengers end up attempting it. If too many people try to walk up long escalators, it ends up making congestion worse. Take London's Holborn station and its 23m escalator:

A 2002 study of escalator capacity on the Underground found that on machines such as those at Holborn, with a vertical height of 24 metres, only 40% would even contemplate it. By encouraging their preference, TfL effectively halves the capacity of the escalator in question, and creates significantly more crowding below, slowing everyone down. When you allow for the typical demands for a halo of personal space that persist in even the most disinhibited of commuters — a phenomenon described by crowd control guru Dr John J Fruin as "the human ellipse", which means that they are largely unwilling to stand with someone directly adjacent to them or on the first step in front or behind — the theoretical capacity of the escalator halves again. Surely it was worth trying to haul back a bit of that wasted space.

Additional data modelling proved correct: If everyone is moving the same speed (walking to the escalator, then not walking on the escalator), 31 more people would be able to get onto the escalator each minute.

Convinced? Even if it might work, theoretically, the real challenge is getting frantic passengers to agree with you. Japan has instituted a similar policy called "Don't Walk, Stand Where You Like". The London experiment was, in fact, inspired by Hong Kong, where the message to passengers was that standing was best for safety reasons. The system claimed to see a decrease in accidents (apparently a bunch of people get seriously hurt every year by other fast-moving people in train stations?). But what kind of message would work in London? TfL still isn't sure.

During a three-week trial, London had station workers shouting out at Holborn passengers to stand, but they have bigger plans if the experiment will become permanent:

The handrail and tread of the escalator will be a different colour, and firmly planted pairs of feet will decorate the left of the steps. In lieu of actual people, a hologram customer service operative will remind people to stand on both sides.

Although I might buy the safety argument, I don't think this would ever ever ever ever happen in some other countries. It seriously sounds crazy to have someone standing there to "make" people stand, hologram or human. I mean, THEY CAN'T STOP YOU FROM WALKING, right?