About a month ago, I picked up a training lockpick set. I’ve always been curious about how lock picking works and how difficult it really is. In the process of learning, I discovered not only how easy it was, but how to look beyond the lock when it comes to protecting my home.

Before you get too hopeful, no this won’t be a guide on how to pick locks. We’ve done that already during our Evil Week series, and we still think it’s good to learn how security measures are broken so it doesn’t happen to you. However, understanding how locks work isn’t the same as keeping them safe. And protecting against a lock pick isn’t the same as securing your home.

Most Locks Are Stupid Easy to Pick

When I first got my lockpick set, it came with a set of keys on a ring locked to the lock itself. It was almost a challenge. “You want the keys to this lock? You’ll have to pick it first.” To my surprise, I had the lock open inside of five minutes. Granted, this was a transparent lock that’s specifically designed for training. If this were a regular lock on an actual door, it would have taken me considerably more time (and it did, the first time I tried it), but I was amazed at how simple it was. In fact, with a little practice, I was raking the pick across the pins in one quick motion and unlocking it in seconds. I still have a harder time picking locks in Fallout 4.

Naturally, my next thought was “Is this what’s protecting my house?” So, I decided to research a bit into how much door locks differ from this training padlock. The answer? Not much. There are some ways that locks can be made more pick resistant. For example, some Medeco locks use pins that not only need to be elevated to the correct height, but also need to be rotated a certain way before the lock will open. Of course, “pick resistant” locks are just that. They make it harder to pick a lock, but it’s by no means impossible. It just might take a little longer. More importantly, common door locks usually don’t have these features.

So, how do you know if the lock on your home can be picked easily? The ANSI Grading System is a place to start. This is a voluntary, US independent grading system that the lock industry uses to self-evaluate how good a lock is at preventing break ins. Grade 3 locks are the weakest, rated as the minimum required for residential security (which should give you an idea of where your house’s lock ranks on the security totem pole), while Grade 1 locks are the strongest.

Out of curiosity, I decided to look up how secure the lock is on my home. I have a Yale double-cylinder deadbolt. It’s easily the nicest lock of any home I’ve ever lived in, and it’s still only an ANSI Grade 2. It’s better-than-average for a residential lock, but it’s still not the best you can get. If you want the best lock on the block, Grade 1 is where it’s at. These locks include pick resistant features, tougher materials, and reinforced strike plates. However, putting a fancy lock on your door may just advertise to thieves that you’ve got some cool stuff in your house. If you’re going to get a Grade 1 deadbolt, at least make sure it doesn’t look much different from normal ones.

Once I started learning about lock picking, I found myself in a few forums dedicated to teaching the art. The more I explored, the more I learned that while lock picking is a fun hobby, it’s not the most efficient way to bypass a lock. Modern pin tumbler locks have been around for centuries, and people have found better ways of breaking into them. Here are just a few methods:

All these methods are only about bypassing locks. That doesn’t even come close to all the ways that someone can break into a house. If you’re an experienced thief that’s looking for the easiest way to get through a locked door, any one of these methods will be more efficient and easier than kneeling in front of a door with a couple of thin pieces of metal, gently moving tiny pins that you can’t see into place. Lock picking, as a means of break-in, is really a last resort.

Most Thieves Break In Without Picking Your Lock Anyway 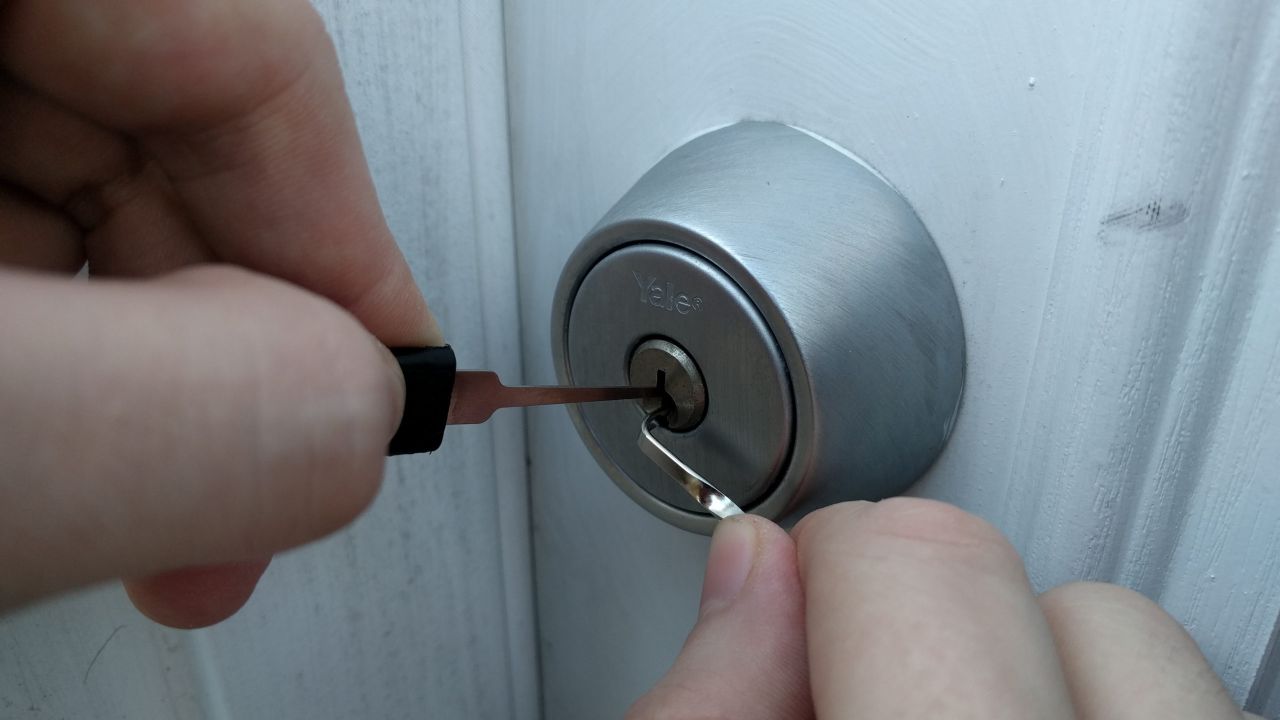 Once you learn how easy it is to pick (or bypass) a lock, it’s easy to get hung up on preventing it. After all, every thief in their right mind would learn this skill if it were so easy, wouldn’t they? As it turns out, not really. According to the Washington Post, the most common home burglaries in the US are committed by male teenagers who live within a couple of kilometres of your home. In other words, these aren’t pros. They’re brats.

Impulsive criminals tend to use more brute force methods to get into a home, rather than tediously picking a lock. Thieves might simply kick the door down (which reinforced strike plates are designed to prevent), smash a nearby window, or enter through the back door that you forgot to lock (whoops). According to FBI statistics, as of 2010, a full 60.5 per cent of all burglaries involved forcible entry, which includes either breaking doors and windows, or threatening the occupants inside.

Of course, that doesn’t mean that door locks are useless. It’s true that if someone wants in badly enough, they can find a way to get in. However, smashing windows or kicking down doors is a surefire way to get noticed. Threatening people directly is even worse if you get caught, since it comes with additional charges. If those are the only options a thief has, they might be more willing to go to your neighbour’s house with the key under the mat, instead of yours.

Security Is All About Outsmarting Someone Else

Years of movies and video games taught me that picking locks was what all master thieves do. It’s so cool, and you look smart doing it. And I will admit, it’s fun to learn and practice. I feel a little better knowing that if I’m ever locked out of my own house, I have an option besides sitting on the footpath and whimpering until my girlfriend comes home.

However, learning how to pick locks didn’t teach me a damn thing about how to stop a thief. Instead, I learned how thieves really operate. The more I researched how to get into locked rooms, the more I understood how a would-be criminal would approach the problem of getting into my house. With that knowledge, I found a few key takeaways:

Learning how to pick a lock was a fun exercise. It gave me insight into how the basics of physical security work, but it also helped highlight what really matters. When it comes to protecting your home, you don’t have to build a fortress. You just have to outsmart the person who’s trying to break in. Whether that’s by convincing them you’re not a good target, or simply minimising the damage done if they break in, the more you can think like a thief, the better you can protect yourself from their attacks.