Even if you listen to Spotify every day, there are a ton of cool features you may not know about. Whether you want to show off the songs you’re listening to, hide your listening activity completely, or get the most out of new additions like Discover Weekly, here are some great Spotify features that are right under your nose. Illustration by Sam Woolley. 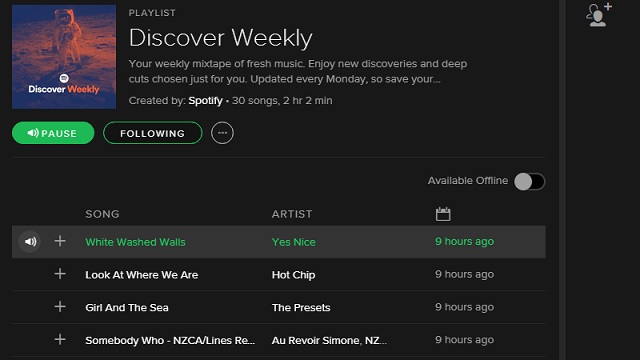 Spotify made a huge splash this year with the Discover Weekly playlist. Every Monday morning, a playlist of songs tailored to your listening preferences will automatically pop up in your list of playlists, no sign ups or additional actions required. Essentially, it’s like a friend that knows your music tastes taking the time to make you a mixtape every week. Its creator, Matthew Ogle, recently explained how it all works to Stuff:

There’s two parts to it. First, we look at all the music you’ve been playing on Spotify but we give more emphasis to the stuff you’ve been jamming on recently. Something that you played yesterday is probably more interesting to you than something you played six months ago. But the real core of it is looking at the relationships between songs based on what other users are playlisting around the songs that you’ve been listening to and essentially finding the missing ones — the ones you haven’t heard yet, or maybe haven’t heard much.

Spotify also have interactive Running playlists, or their sort-of-gimmicky Year In Music, but Discover Weekly is actually worth paying attention to. A lot of people, myself included, have been amazed at how well it works. According to Spotify, more than 1 billion songs have been streamed through Discover Weekly playlists, and more than 70 per cent of listeners saved at least one track to their own playlists over the past 10 weeks. If you haven’t given it a chance yet, you absolutely should.

There is a small catch, however. Your Discover Weekly playlist gets wiped and refreshed with new songs every Monday. If you had a busy week or forgot to check it out, you could miss out on hearing your new favourite song. Fortunately, this IFTTT recipe from user xxnu will automatically move your Discover Weekly songs into a separate playlist every week so you never miss a tune.

View Your History and Add Great Songs You Missed 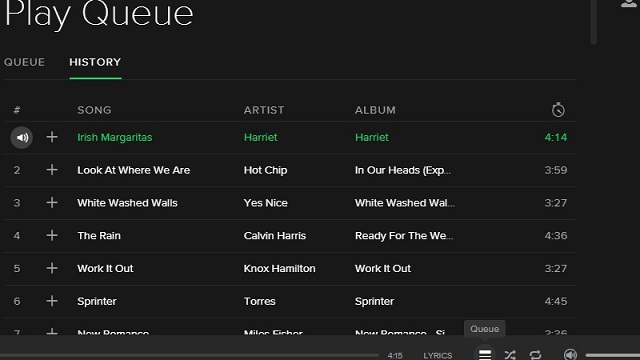 Have you ever been bopping along to a great radio station or someone else’s playlist, heard an awesome song, got sidetracked, and completely forgot what it was? Me too. It’s OK, we don’t have to be sad because we missed out on adding it to our own playlists.

Open the Spotify desktop app, then click the hamburger icon in the lower right-hand corner to open up your play queue. Once there, you can see what songs are going to play next, and more importantly, every song you’ve already listened to. Your play history is synced up across your account, so it even includes songs you listened to on your phone, in the browser at work, or on your video game console. If you’re having a hard time finding an awesome song you heard earlier, this is a great place to start.

Instantly Add Tracks to Spotify from Shazam for iPhone or Android

The Shazam app is great for identifying that funky fresh song playing way too loudly in Forever 21. It’s even better if you connect your Spotify account to Shazam. Once they’re synced up, and Shazam has identified the song you’re listening to, hit the tiny arrow next to the play button. You’ll see a drop down menu with a Spotify option listed. When you start to play it in Spotify, you can then add it to your own library with just a few taps. 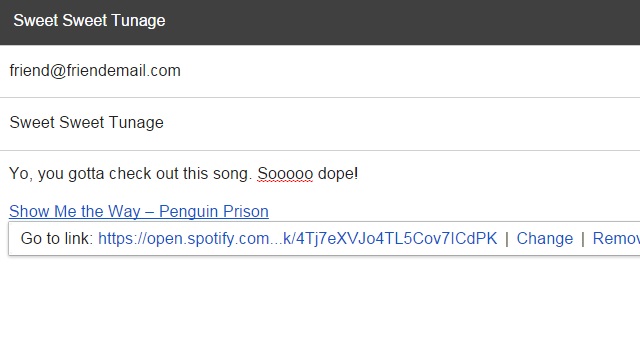 Spotify lets you share tracks via URL links and HTML embed code, but you can also share track links simply by dragging them from your desktop app. Click and drag the song you want to share into any text field and Spotify will automatically create a link for the song with the song’s title and recording artist. This makes sharing songs with someone over email or Facebook message a piece of cake, and it looks nice too.

Use Private Listening Sessions to Hide Your Activity

Spotify’s community mentality is great for sharing music, but sometimes it would be nice to listen without all of your Spotify and Facebook friends knowing. We’ve talked about how you can completely hide your activity and playlists before, but what if you’re active in the Spotify community and just want a temporary smoke screen? All you need to do is start a private session.

Go to the File menu, then click “Private Session” in the dropdown menu. Now you can listen to whatever you want without anyone knowing, until you either restart the client or disable private listening. Now you can practice your karaoke cover of the Backstreet Boys’ “I Want It That Way” without showing the whole world you played that song 38 times in a row. If you want to hide all of your activity from Spotify and Facebook friends for good, open up the desktop app, head to Edit, then click Preferences. In the “Social” section, toggle off everything you see there and disconnect your Facebook profile if it’s connected.

Tap to Preview Albums and Playlists in iOS 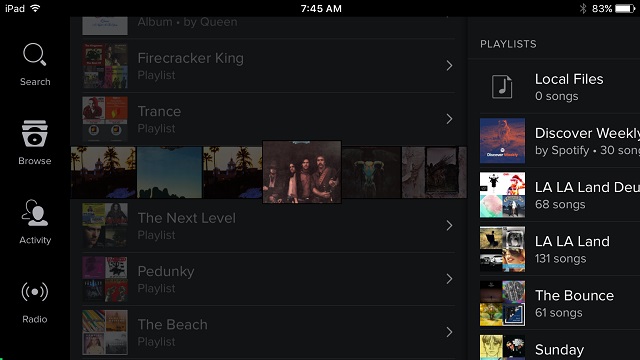 If you have the Spotify app on your iPhone, iPad, or iPod Touch, you don’t need to open a playlist just to see what songs are on it. Tap and hold the playlist title and you’ll see the album artwork to the first five songs in that playlist. As you hold your finger down and slide over each image, you’ll get a quick preview of each song.

You can do the same thing with albums, or Spotify’s own pre-made playlists. It may not seem like a huge time-saver, but when you have several similarly-named playlists like “New Tunes 3” (like I do), it helps you search and decide what to listen to quickly. 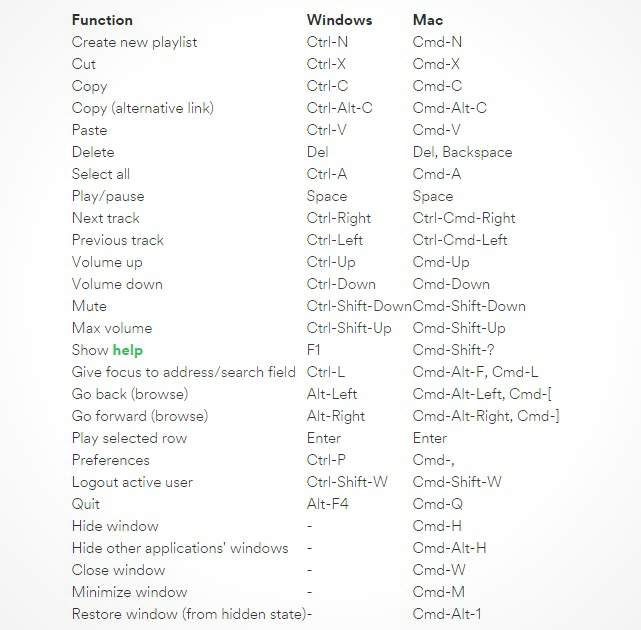 If you can’t find one of your playlists, accidentally deleted one, or just want to bring an old friend back from the dead, Spotify holds onto deleted playlists for a long time. To recover a deleted playlist, head to your account page in a web browser, and find the “Recover Playlists” option on the left-hand side. Once there, look for the playlist you want to resurrect, and click the “restore” button. Like magic, it will reappear in your Spotify apps again. 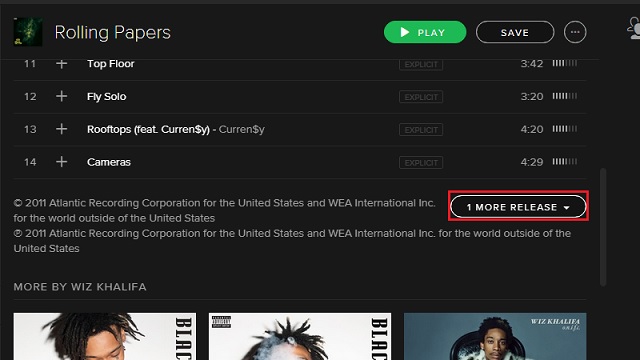 It can be annoyingly difficult to track down the “explicit” or “clean” versions of songs and albums, meaning you’re stuck listening to the radio version of your favourite track when you really want the original, unedited one . It seems that Spotify deems one version to be the “popular” version, making your search for the other version a bit of a wild goose chase. Here’s what to do instead: The next time you land on an album’s page in the desktop app and you’re after the alternative version — either clean or explicit — scroll down and look for the “1 More Release” button. When you click it, you’ll see the alternate version so you can choose whicher one you please.

Listen to Your Spotify Music In Your Uber Ride

Starting this past November, Spotify and Uber teamed up so you can listen to your playlists through your driver’s sound system. To set it up, open the Uber app on your phone, and head to your profile settings. Scroll to the bottom and tap “Connect Spotify.” Enter your Spotify credentials and you’re ready to hail a ride. When a Spotify-enabled driver gets assigned to you, you’ll see a small icon next to their driver profile in the Uber app. From there, you can decide what playlist to listen to once your ride starts.

Keep in mind, however, that not all drivers have Spotify enabled, and service is only available to Spotify premium users. Also, the option was only available in Sydney, London, Los Angeles, Mexico City, Nashville, New York, San Francisco, Singapore, Stockholm and Toronto upon release, but the service has been rolling out to more cities over the last few months. The only way to know if it’s available for you is to check your Uber app.

Turn the Spotify Desktop App Into a Karaoke Machine 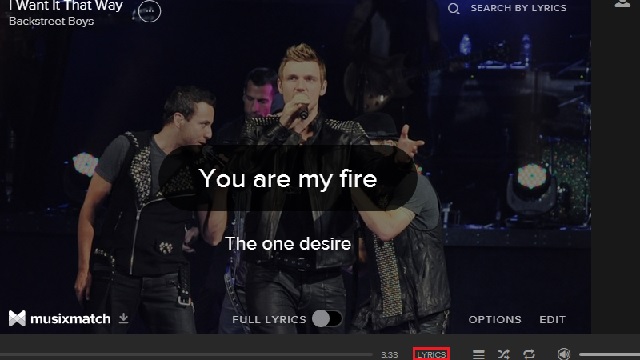 The Spotify can also turn any computer into a karaoke machine at the press of button. Start playing the song you want to sing, then find the “Lyrics” button in the bottom right-hand corner of the window. Once you click it, you’ll have scrolling lyrics for almost every song in Spotify’s massive library. You can also adjust the size of the lyrics, or choose to see the entirety of the songs lyrics all at once.

Showing song lyrics used to require a third party app, but Spotify did away with apps and rolled this feature into the service natively. The lyrics section also lets you search for other songs by their lyrics in the upper right-hand corner. Instead of bouncing from Google to Spotify to find “that one song that kind of goes like this”, you can do it all through the desktop app now.