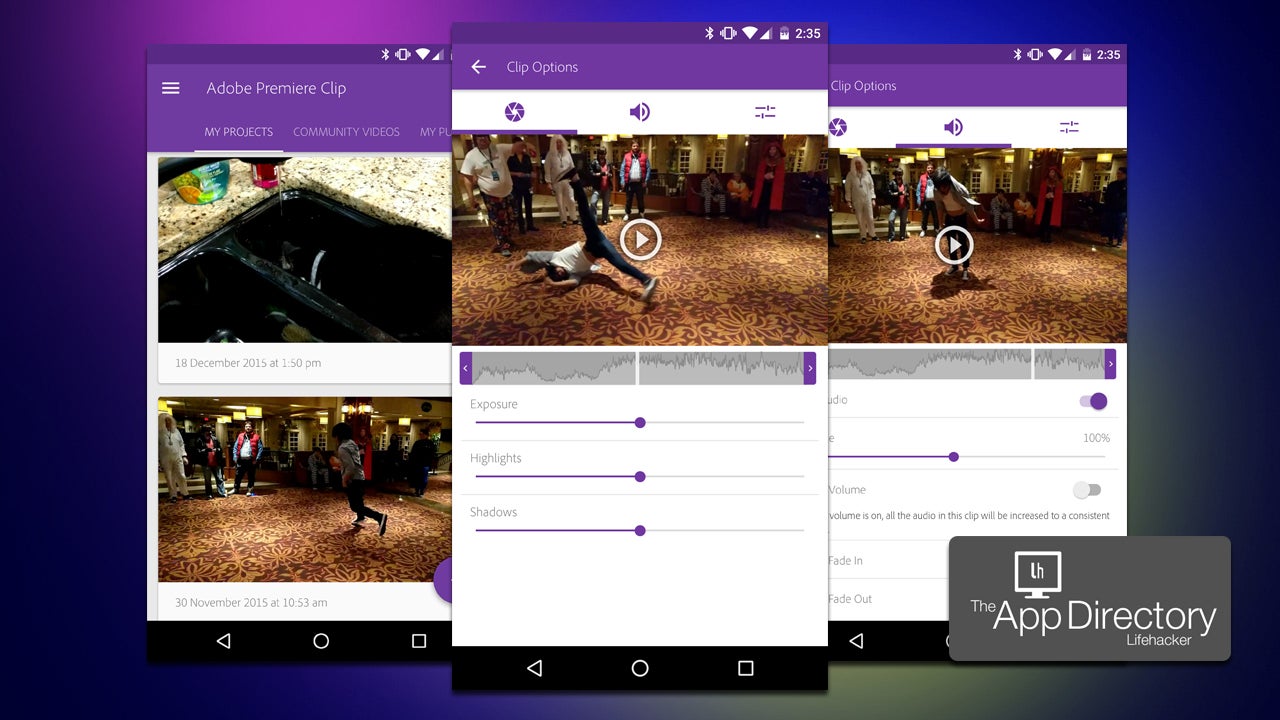 Oh, finally we can write this post. Video editors have sucked on Android for a long time. Too long. But now, Adobe Premiere Clip brings basic, easy-to-use video editing to Android. You can trim clips, mix multiple clips together, and add your own soundtrack. It's not perfect, but it's a good start.

Given that Android has struggled to get many decent video editors, Adobe Premiere Clip's primary selling point is "It exists." Still, it's pretty great on its own merits! Adobe knows you may not want to do much hardcore editing on your phone, so you can use the automatic editing mode to let Adobe make cut and add a soundtrack for you. It's not much, and it's pretty similar to Google's auto-awesome feature, but it's handy to have.

If you want to get a little more control, you can switch to Freeform mode. Here, you can split clips, add multiple clips together, crossfade between them, and add your own soundtrack. If you're used to a proper non-linear editor on desktop computers, you'll probably find it lacking, but for quick edits on your phone, it's very easy. This approach makes much more sense than trying to shoehorn an entire desktop editor interface onto a tiny screen that your thumbs already struggle with.

You can also use the app to do basic colour correction, which is a very welcome addition. You can adjust exposure, highlights, and shadow levels in a given clip. Most editors tend to either neglect or bury this feature, but it's an underrated adjustment that can make your clips look way better with minimal effort.

While the app is simple to use, it's not very flexible. You can edit multiple clips together, but you can only add one soundtrack file. That audio file will always start at the beginning of your project, as well. If you want to start playing a song or a sound effect halfway through your video, you can't really do that.

You can also add title slides, but they really suck. Unless you like plain white text on a black background, of course. You can change the colour of the text or the background, but you can't move the position of the text, nor can you overlay text onto a video. It works for end credits, but otherwise it's pretty inflexible. That being said, if you need that type of title slide, it's super easy to create.

In case I haven't made it obvious enough, there's not a lot of competition for good Android video editors, but there are a couple. Cyberlink's PowerDirector is the closest contender. You can edit multiple clips together, add music or sound effects in arbitrary locations, add title overlays and apply effects to your videos. If you need something a bit more powerful than Premiere Clip, this is the one to get. The downside is that it costs $6.99 to unlock the full version, or else you're stuck with a watermark. Also, the interface is a little more complicated as it crams a normal non-linear editor onto a phone screen. If you need the extra features, though, it's a worthwhile upgrade.

Kinemaster is the next step up, with support for multiple video layers, frame-by-frame splicing, transition effects, and more. However, it costs $7 per month to use after a 30-day free trial. Alternatively, you can pay $41.80 to use it for a year. If you're editing videos regularly and you like Kinemaster's interface, that may be OK, but for the average user who just needs to edit a clip here or there, that price can be a difficult pill to swallow.

Finally, there's Magisto. This app has been around for a while, but it's almost misleading to call it a video "editor". Instead, this app allows you to choose a few clips, pick an editing style, and the app will put everything together for you. Google Photos has a similar automatic editing tool if you want a neat package without much work. Both are low-effort options that will get the job done, but you don't have much control over either one.