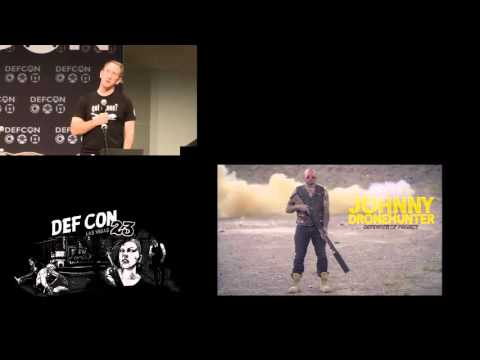 If you got a new drone for Christmas, congratulations! There’s plenty out there on the market and they can be a lot at fun. They’re becoming popular enough that regulations are starting to catch up, too, with CASA issuing guidelines coming into force next year that cover commercial and hobbyist use of drones.

But say that hobbyist pilot is your neighbour’s kid. Who happens to be an annoying brat that keeps crashing their new drone for Christmas.

Michael Robinson, a former Department of Defense employee and a current computer forensics teacher at Maryland’s Stevenson University, found himself in this exact scenario. “My neighbor’s kid is constantly flying his quadcopter outside my windows,” the description for his talk begins.

His presentation at the DEF CON annual hacking conference — which was precisely the solution Robinson resorted to — was uploaded Boxing Day Australian time, and it’s a funny and intriguing look into the issues and research surrounding Robinson’s attempt to force commercial drones to land.

DEF CON 23 took place in Las Vegas earlier this year, but the presentations from the main series, village talks, video slides and audio have only just gone up. The playlists on the DEFCONConference YouTube channel is the fastest and simplest way to catch up with everything, but — as a total neophyte — I found Robinson’s to be one of the funniest and most accessible.

If you’re just after the audio, or specific video slides from certain presentations (particularly in instances when speakers are showing off demos of scripts or what not) then you can access those through the RSS feeds on the DEF CON website. Note that months have passed since many of these were released to the public, but the knowledge and research should still be enlightening.