I’m Marc Maron, And This Is How I Work

By any measure Marc Maron has had a banner year. The comedian talked with President Obama on his podcast, his television show on IFC completed it’s third season and was renewed for another, and he has a new standup special premiering in just a few days. Must feel good, right? With a career in comedy and radio that has spanned multiple decades, his success is hard-earned and well-deserved. It is perhaps unsurprising that there’s no complacency in it for Marc; he tells us he’s grateful but the work begets more work and there’s no time to sit back and relax. With that in mind, we spoke with Marc to learn a little about how he manages his multiple projects without burning out.

His new special, Marc Maron: More Later premieres Friday, December 4 at 10/9c on EPIX, EPIX.com, and all EPIX apps (unfortunately only available in the US).

You’re having quite a year: The president went to your house to be on the podcast, IFC renewed your TV show, and you have this new standup special coming out. So I’m wondering, are you at a point where you can sit back, put your feet up on the desk, and just, y’know, appreciate that you’re doing OK? Do you feel that way? 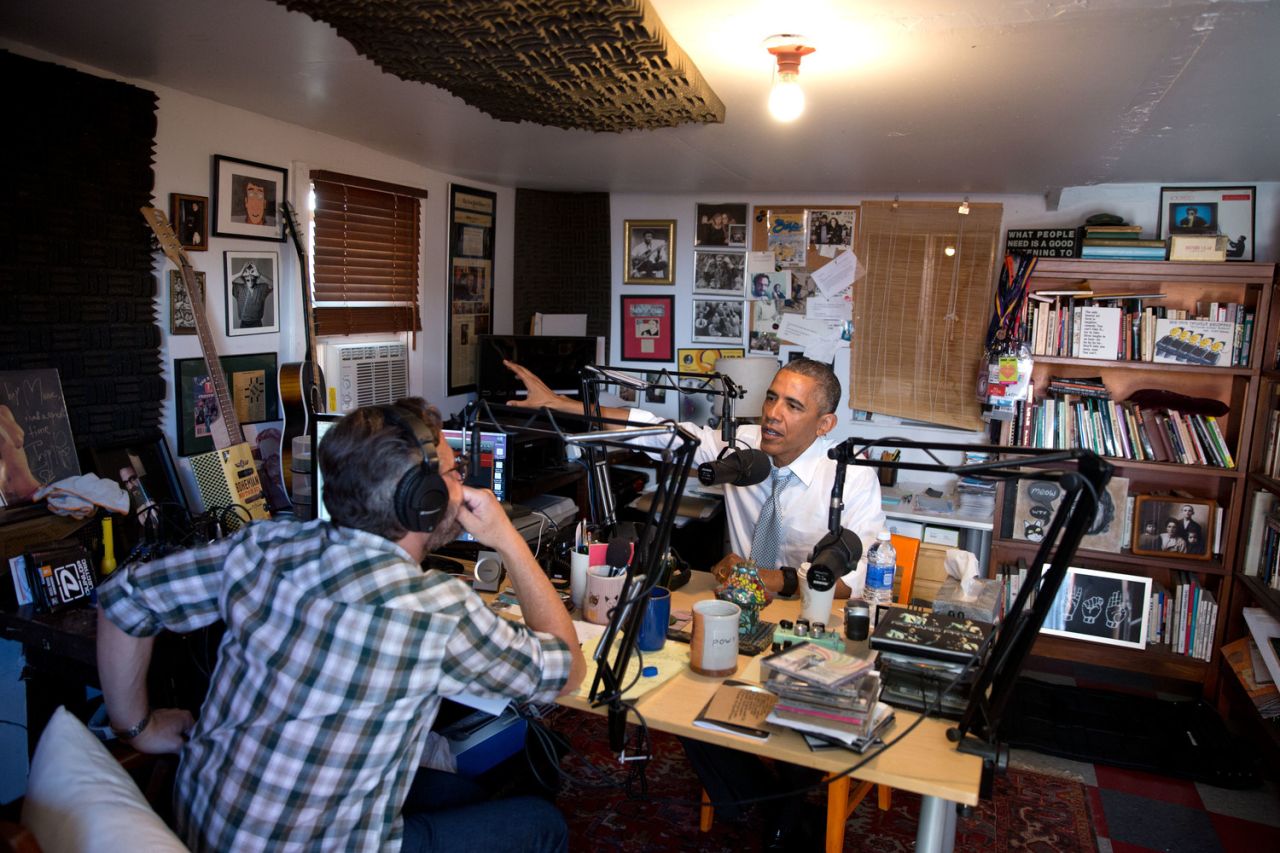 If you could choose one word or phrase to describe how you work, what would that word be?

Impulsively? So it’s kind of like going from one thing to the next without necessarily a grand scheme, maybe?

That’s right. Well I mean, you know, there’s context. I mean the podcast is a podcast, the TV show is a TV show, and my standup is my standup and all of those sort of have to happen. So it’s sort of limited in terms of how impulsive I can be, but I do seem to approach them with the same type of spontaneous energy, without doing an insane amount of preparation. At least in the creative process. Once you get to shooting a television show or doing an hour and a half standup special, you’ve got to have your stuff together. Doing the podcast, though, that’s able to be the most impulsive endeavour throughout that can sort of remain like that.

And when you’re managing all this stuff, do you use certain apps or software or calendars to figure out what you’re doing? How do you keep track of it all?

I’m not great at keeping track of stuff. I kind of go day to day and I’m always sort of surprised by what I have to do sometimes, because I seem to be kind of bad at knowing what’s gonna happen and what’s coming up. It’s OK — it limits my dread — but you know, I have a manager who keeps me up to speed, and when we’re doing the show we have a schedule.

I don’t use many apps, you know, I just don’t. I use the Gmail calendar and I use GarageBand to record. And I’m on Twitter too much. But I don’t manage my life with apps, really.

Are you an iPhone guy? Or do you have an Android?

So it probably follows that you use Apple computers too, being that you mentioned GarageBand.

Yeah, I do, I use all the Apple stuff. I’ve got an Apple “Air-book-whatever”. And I’ve got a computer out there that I use specifically for the podcast.

I wanted to ask about your workspace. I know you’ve got the garage where you do the recording; does it also function as your main hub where you do all your work?

You know, I kind of have room out in the garage — I set up a space to work once before, but I just didn’t — it didn’t end up really happening. I do this show out there, but this sort of sitting and reading and working, I thought that was gonna happen out there but it didn’t really happen.

And aside from the phone and computer, is there any other gadget that you really need? You must have some kind of mobile recording setup, right?

I generally use a Zoom H4N [digital recorder] with a couple of Shure Beta 58s lately. I used to use Blue Encore 200 mics but I’m using the the Beta 58s for some reason these days.

Do you ever have time to let your mind wander? Or is it always constantly working on the next thing?

I mean my mind wanders a lot. It doesn’t necessarily wander to good places. You know, I sort of think out loud and I’m able to do that on the podcast and through standup and observations. But yeah my mind wanders, even if it’s not always in the best direction.

When you’re working on more creative stuff, coming up with stories for the show or doing standup, do you find yourself scheduling time for that or is it more just… plucking moments from the air?

Well coming up with stories for the show, no, I write things down and then we sit in a room with a bunch of guys and try to figure it out. For the standup a lot of that happens on stage, I’ve got things bouncing around my head, and then I go up on stage and try to work them through.

I play guitar too, I like to do that.

Does that help you think? Or remove yourself from thinking about the other things?

Yes — it’s a meditative process for me.

I was going to ask if you listen to music while you’re working, but so much of your work is talking and thinking about things, so I imagine playing the music is what kind of helps you think about stuff.

Right. Yeah I don’t listen to much music while I’m working. I listen in the car. Well that’s not true, I’ve got records going a lot here.

Does that help you recharge?

Kind of; it’s calming. I like having music in the background if I’m just sitting around. Sometimes it’s annoying, it depends. I go through waves of it, you know?

Some of the busy or prolific people I talk to have crazy sleeping schedules. What kind of cycle do you have? Are you a night owl or an early riser?

I’m not really a night owl; I used to be, I guess. I’m usually in bed by midnight or so. I can’t sleep anymore — I get up pretty early. Today I got up at 6:30, I usually get up between 6:30 and 7:30, just because. I like to have a couple hours in the morning just to get my head together.

What everyday thing are you better at than anyone else? Is there something in everyday life that you find yourself being the go-to guy for?

No. I don’t know — I mean, I live a pretty solitary life, really. There’s not too many people who need to go to me for anything, except when I’m in the writer’s room. But I’m pretty good at making coffee. And I’m pretty good at cooking things, but I’m not really a “go-to” guy.

Are you an obsessive coffee person? What kind of coffee brewing method?

I’m not that obsessive. I sort of leveled off — I’m using this [pour over] cone. I do have a burr grinder, I do have an espresso machine for when I want to make espresso. And I use a sort of cone, I time it out in a cone. But I do grind per pot. Yeah, it’s a process. I don’t take coffee for granted, certainly.

But that’s a reasonable level of good coffee, I think. Are you currently reading anything that you’re really into? Books or novels?

I’m about to start Kliph Nesteroff’s book, The Comedians. I was reading Cintra Wilson’s new book, Fear and Clothing. She’s genius. Both of them are very compulsive genius writers.

I generally know that people who get things done work, one way or the other. You know what I mean? I know how most people work. I don’t know about talking to anybody specifically about guidance in that. I’m not very good at managing time, so if you know somebody who is some sort of wizard of time management — I think it’s because I generally work at my own pace, and I don’t think about it much, because on any giving day, I don’t have to deliver or punch a clock or whatever. I imagine I could be more effective with my time if I thought about it differently. But I usually get a lot of stuff done.

What’s the best advice you’ve ever received? What advice have people given you that stuck?

I think about the stories [people have told me] that have resonated with me, around thinking about things differently. But I don’t know that anyone’s necessarily given me advice, other than a few dumb recovery slogans that sometimes help me think about things clearly and stay in the present. I do think that whoever told me to shut up and listen — maybe it was my parents — it took me a long time to get the hang of that. I think that’s generally the best advice.

For people that look up to you, for what you’ve done in podcasting and comedy, what advice would you give to them if they’re aspiring for something similar?

Lower your expectations, do the best you can, and see what happens.

And shut up and listen. Is there anything else you might want to say to our readers and your fans?

Make sure to make some time to really connect with other human beings in an authentic way, and take the risk of letting yourself be seen emotionally, so you don’t end up completely insulated in your own little world — whatever that’s made out of — however many apps that is.