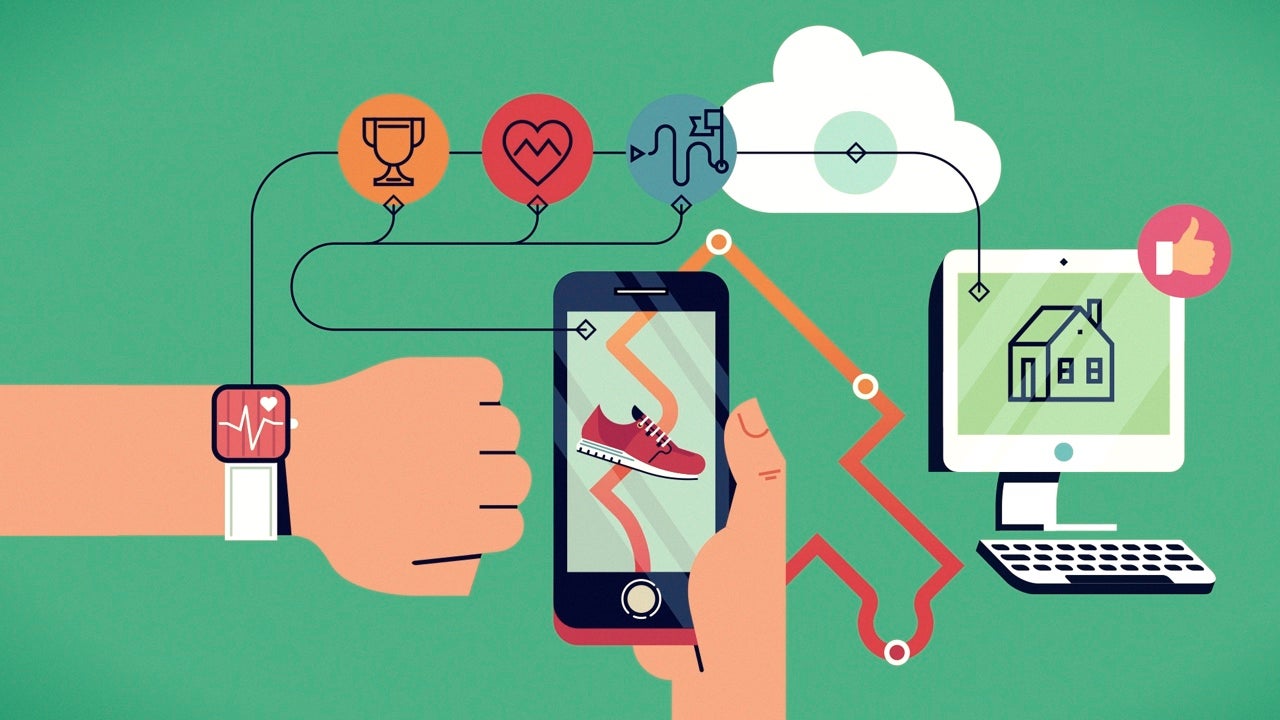 Behavioural feedback loops run unnoticed in the background of our daily lives, and affect which habits we stick with — both good and bad. Instead of letting feedback loops shape our lives in invisible ways, you can design them to foster better habits.

Feedback loops also manage how the human body works; let’s start by taking a look at an extreme example of a physiological feedback loop gone awry.

Robert Wadlow was born on 22 February 1918, and weighed 3.8 kg and was 51cm tall. A perfectly normal size. But there was nothing normal about what happened next.

Within six months, Wadlow had doubled in height and quadrupled in weight. As a one-year-old, he was over 1m tall and weighed the same as the five-year-olds in his neighbourhood. By the age of five, Wadlow had exploded to 2.15m tall. On his first day of kindergarten he wore clothes made for a seventeen-year-old. Wadlow suffered from an overproduction of human growth hormone caused by hyperplasia of his pituitary gland. To put it more simply: most humans have an internal feedback loop that regulates the production of growth hormone, but Wadlow’s feedback loop was broken.

By the age of 12, Wadlow was over 2.18m and weighed nearly 130kg. When his uncontrolled growth propelled him over 2.54m at the age of 18, he went on a tour around the United States with Ringling Brothers Circus.

Sadly, but not unexpectedly, the rest of his body could not keep pace. Wadlow outgrew his nervous system and began to lose feeling in his legs and feet. His immune system began to shut down. When Wadlow died at the age of 22, he was the tallest human in recorded history at 2.72m and by all indications he was still growing.

The Hidden Power of Feedback Loops

Feedback loops are always running in the background of our lives, but they influence our bodies and minds in profound ways. When each process works as intended, our bodies function properly and we remain balanced. When something in the system breaks, we steadily slip away from equilibrium. In extreme cases, things spiral out of control — like the growth of Robert Wadlow.

Feedback loops are not only at the core of human biology, but also at the centre of human behaviour. Like the biological processes mentioned above, psychological feedback loops often run unnoticed in the background of our daily lives. They can influence everything from how fast we drive to how frequently we take our medications to how often we check social media. In fact, I would say that feedback loops are the invisible forces that shape human behaviour.

In this article, we’re going to talk about how you can harness the hidden power of these systems and use feedback loops to stick with good habits and break bad ones.

The Two Types of Feedback Loops

“Feedback loops provide people with information about their actions in real time, then give them a chance to change those actions, pushing them toward better behaviours.” — Thomas Goetz

We can divide feedback loops into two different types:

Balancing feedback loops pull behaviour back on track and help to stabilise a system around a desired level. These systems can be very effective at both moderating bad habits and kickstarting good habits.

Let’s say you are driving just a little too fast and you pass a digital radar sign that says, “Your Speed Is…” and displays the current speed of your car as you pass.

You might not expect it, but these signs are incredibly reliable and effective ways to change the behaviour of drivers. On average, “Your Speed” signs decrease the driving speed by 10 per cent. Not only that, but drivers continue to drive more slowly for miles down the road.

These signs are one example of a balancing feedback loop. The output of your current behaviour (driving too fast) becomes the input for your new behaviour (slowing down).

The thermostat is another example:

How can we apply balancing feedback loops to governing bad habits and building good ones? Here are a few examples:

Balancing feedback loops are fantastic at regulating bad habits because, similar to a thermostat, they can attack the problem from two sides. On one side, they can keep unproductive or unhealthy behaviours in check by making you aware of your mistakes (like displaying your speed or automatically shutting off your outlets). On the other side, they can remind you to perform good behaviours rather than slipping back into old patterns (like a piece of tape pulling on your slumping shoulder or a paper clip sitting in a bin on your desk).

Reinforcing feedback loops increase the effect of a particular system or process. These systems can be great for building good habits and achieving peak performance because they naturally amplify and strengthen their own behaviour.

Here’s one example from my own life: I am the happy owner of a Honda Accord. On the dashboard of my car, there is a light that circles the speedometer. This light changes colour based on how I am driving. If I drive aggressively and accelerate quickly, the light is white. If I accelerate moderately, the colour changes to light green. If I drive in a fuel efficient manner, the light turns bright green. Whenever I see the green light around my speedometer, I know that I’m saving gas and driving in the most fuel efficient way possible.

When I first bought the car, I didn’t think much of it, but now this simple light has essentially turned driving into a game where I am constantly trying to live in the green zone. The light is a reinforcing feedback loop that emphasises many good behaviours: I save gas, I save money, and I probably drive safer and more slowly as well.

How to Build Your Own Feedback Loops

I would like to offer a simple three step method for building feedback loops in your life.

Let’s breakdown each step of this framework.

Comparison is essential for making sense of your feedback loop. Measuring something is useless if it’s not relevant to you. Remember the “Your Speed Is…” sign from earlier? That reading of your current speed is only relevant when compared to the actual speed limit. It is the comparison between where measurement says you are and where you want to be that makes the next step clear. Effective feedback loops help you make comparisons that are personal and relevant.

Adjustment is the action that closes the feedback loop. Adjustments should be made as quickly as possible. The more rapid the change, the tighter the feedback loop. In the words of Seth Godin, “The best way to change long-term behaviour is with short-term feedback.”

Why Some Feedback Loops Work While Others Fail

One bad habit that commonly frustrates physicians is when a patient doesn’t take their medications as frequently as prescribed. A few years ago, a company called Vitality launched a new product called the GlowCap, which was intended to help solve this problem.

“When a patient is prescribed a medication, a physician or pharmacy provides a GlowCap to go on top of the pill bottle, replacing the standard childproof cap. The GlowCap […] connects to a database that knows the patient’s particular dosage directions — say, two pills twice a day, at 8am and 8pm. When 8am rolls around, the GlowCap and the night-light start to pulse with a gentle orange light. A few minutes later, if the pill bottle isn’t opened, the light pulses a little more urgently. A few minutes more and the device begins to play a melody — not an annoying buzz or alarm. Finally, if more time elapses (the intervals are adjustable), the patient receives a text message or a recorded phone call reminding them to pop the GlowCap. The overall effect is a persistent feedback loop urging patients to take their meds.”

When feedback loops fail, it is often because of one of these three problems:

The GlowCap solves all three of these problems and that makes it an excellent feedback loop. First, it tracks your consumption and reminds you when to take your pills automatically, so you don’t have to worry about measurement. Second, it is specifically tailored to your prescription, which makes it instantly relevant to your needs. Third, it provides feedback quickly when you get off track: first the light, then the music, and finally the text message or phone call. Solving these three problems is essential to building an effective feedback loop.

Here’s a simple fact: most people, most of the time, don’t know where they stand on the issues that are important to them.

My argument is that we should spend less time letting feedback loops shape our lives in invisible ways and more time designing the feedback loops we want and need.

In the unexamined life, it can be easy to slide into a downward spiral of bad habits and unproductive behaviours because of poorly designed feedback loops that trigger us to eat more, smoke often, and worry too much. Thankfully, the reverse is true as well. Carefully designed feedback loops can help us stick with good habits and regulate behaviours that would be unhealthy if they spiraled out of control.

Feedback loops influence everything from the bodies we live in to the choices we make on a daily basis, but most of the time we are victims of the feedback loops that surround us not the architects of them.

Feedback Loops: How to Master the Invisible Hand That Shapes Our Lives [James Clear]