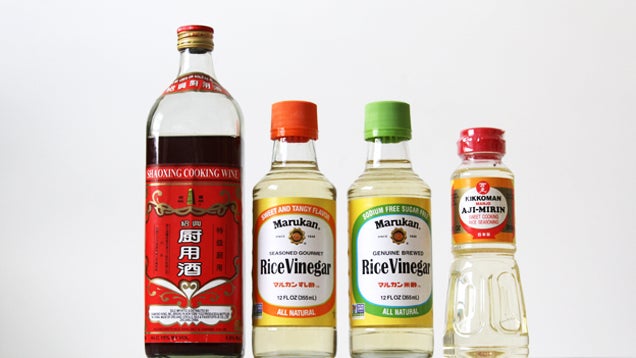 Rice wine, rice wine vinegar, rice vinegar, seasoned rice vinegar: say that three times fast. While these products sound pretty similar, they can’t all be used interchangeably, and there are some important distinctions to be aware of.

Let’s talk about the similarities first: rice vinegar and rice wine vinegar are the same thing. All rice vinegar is made by fermenting the sugars from rice into an alcohol such as wine, then further fermenting the wine into acetic acid. So if a recipe calls for rice wine vinegar and you’ve purchased rice vinegar (or vice versa), rest assured that the only difference is the wording on the label. Rice wine vinegar is a rather mild, slightly sweet vinegar that works well in the likes of salad dressings and dipping sauces, helping to lend a pop of brightness. At an Asian grocer, you’ll often discover varieties made from different kinds of rice: brown rice, black glutinous rice, and red yeast rice, for instance, which all offer different flavour profiles.

Like rice vinegar, rice wine is also made from fermented rice, but it’s created by fermenting steamed glutinous rice instead of rice or sake lees, which is what’s used in the making of rice vinegar. There are dozens of different rice wines with origins all across Asia. A few that you might commonly see: Shaoxing, a caramel-coloured Chinese rice wine used to make savory dishes like drunken chicken; mirin, a sweet Japanese rice wine used as a glaze for seafood and in teriyaki sauce; and, of course, sake, the most famous rice wine, made from milled rice, water, and a fungus called koji. Sake makes a nice addition to a soy-based marinade, and also serves as a good steaming liquid or broth for seafood dishes. Although let’s be honest: it’s probably best when it’s reserved for drinking.