Logitech and Razer both have some pretty awesome gaming peripherals. Whether you’re playing games or getting real work done, they’re both great options. The software they use have some small, but important differences. Here’s how they stack up against each other.

Both Logitech and Razer have a wide array of gaming peripherals to choose from, and we’re not going to suggest any particular models in this post. Instead, we want to know about the capability of the software as a whole. During our testing, we used the Logitech G410 keyboard and G602 mouse, as well as the Razer Blackwidow Chroma Tournament Edition keyboard and Naga Epic Chroma mouse. While there’s a lot we could say about specific models and such, today we’re going to talk about something no one really reviews — their software, and how easy it is to customise your gear with macros, profiles, and even lighting.

Both Logitech and Razer use a single application to manage all of your peripherals at once. In most ways, they’re pretty similar. However, they both have very slightly different ways of handling their tasks that leave the choice between them largely up to personal preference. We’ll get to that in a bit. For now, here’s what we’re looking at:

Both apps perform most of the same key functions, including programming buttons on your peripherals, recording macros, customising the colour scheme, and recording usage statistics. The way they go about each task can be very different, though. Keep in mind as we review that neither way is necessarily wrong. We’ll explain how each one differs and you can decide for yourself which platform is best for you.

Logitech and Razer allow you to customise special macro keys so you can quickly perform complicated actions. Both allow you to set up multiple profiles, as well, so you can customise your buttons on a per-application basis. For example, you can make a button on your mouse open a new tab while you’re in Chrome, or punch some guy in the face while you’re in Mass Effect. Both will automatically switch based on which application is in focus at the time. However, each piece of software handles this a bit differently.

In practice, I found this could cause some problems. For example, I have a Chrome profile on both the mouse and keyboard that I use for productive things like opening a calculator or entering a block of text for work. If I only set up a Skyrim profile for my Razer keyboard, and the last program I opened (or alt-tabbed to) was Chrome, my Razer mouse would still have my Chrome shortcuts bound to it. Accidentally launching the calculator application is not ideal while I’m fighting a dragon. Worse yet, if Chrome wasn’t the last application I alt-tabbed to, the mouse might be using an entirely different profile. This could make it very hard to know what a particular button is going to do unless you customise it specifically.

With Logitech, if I only set up a Skyrim profile for my keyboard, the mouse would disable the Chrome profile while I was in the game, and use the default shortcuts instead. These were usually more harmless shortcuts like displaying my mouse’s battery level or pressing a number key. More importantly, it was consistent. If I only set up a few keyboard shortcuts on a profile, I didn’t have to worry that a button might be bound to a complex macro from some profile associated with a different application that I’d forgotten about.

There are a few other differences I noticed as well:

The differences between Razer and Logitech on this front were largely cosmetic. Personally, I’ve used Logitech’s software more, so I found Razer’s interface a bit more confusing, but not catastrophically so. This is probably a result of me having used Logitech’s app longer. In both cases, there’s a bit of a learning curve, so which one you choose doesn’t really matter.

The only exception is the profile switching issue. Your needs may be different than mine, so I won’t say one is definitely better than the other, but it’s important to understand how both platforms handle profiles. Logitech assumes you want the same profile active across all devices at all times, while Razer allows (or, more accurately, requires) you to specifically create a profile for each application on each device.

Manually customising your keys is nice, but sometimes you need to perform an action that’s too long or complex to create by hand. That’s where recording macros comes in handy. You can just hit the record button, press the keys you need in the correct order, and then save that action for later. You can then assign that action to a specific button later.

If you’ve ever played an MMO, you know how awesome this can be. My mage in World of Warcraft can stop casting, switch targets, remove a curse, and get back to the current target at the press of a button. It’s also handy for work. As I’ve mentioned in a previous post, I use macros to do routine tasks like add photo credits or tags regularly.

In my experience, Logitech’s interface for saving macros was a bit more straightforward. On the screen where you assign commands to buttons, there’s a small, searchable sub-window called “Commands.” Here, you can create new macros before you even assign them to a button. Then, drag them to the key you want to use to trigger that Command. Everything is in one place and it’s super easy to use.

In contrast, Razer Synapse has a few more steps involved. First, you need to create macros in a separate tab of the application. Then, you have to go back to the key assignment screen, click the button you want to assign, choose “Macro” from a drop down list of options, and then choose the name of a macro you created from the list. It’s a lot more steps for something so simple.

When it comes to on-the-fly recording, Logitech is once again slightly simpler than Razer, but only if you have certain hardware. Some keyboards have a dedicated Macro Recording button (or “MR”). You can simply press this button, then press one of the programmable keys. This will begin the recording. Perform the action you want to save and, when you’re done, click the MR button again. That action is now saved on your keyboard. You don’t even need to touch the application.

Razer instead uses a Fn-style button (like you find on most laptops) to trigger on-the-fly recording. The keyboard I tested had an “M” symbol on the F9 key. By pressing Fn+F9, you can start recording a macro. When you’re finished, press Fn+F9 again, then press the button you want to save that action to. It’s slightly more cumbersome than having a dedicated macro recording button, but it does also save space on the keyboard, so you don’t necessarily need to buy hardware with a dedicated button to get the feature.

Both platforms also handle macro repeating slightly different. Logitech allows you to set several repeat options (like repeating while pressed, or repeating while toggled) on macros when creating the macros themselves. For example, you may want one button to reload your gun every five seconds until you say to stop, but a different button should reload your gun every five seconds for one minute. With Logitech’s platform, you’d have to create two separate macros for this. However, Razer only makes you choose a repeat option when assigning a macro to a key. So, you could create a macro to reload a gun. When you assign it to a button, make one button repeat every five seconds until you disable the toggle, and make the other button repeat it for one minute. This gives Razer a bit more flexibility.

There’s very little difference between how Logitech and Razer handle their macros, but depending on your use cases, the slight differences could mean a substantial change to your gameplay or workflow. If you need macros that you can repeat a specific number of times, Razer is much better. If you need to create a large list of macros you can easily search, Logitech is going to be more your speed. 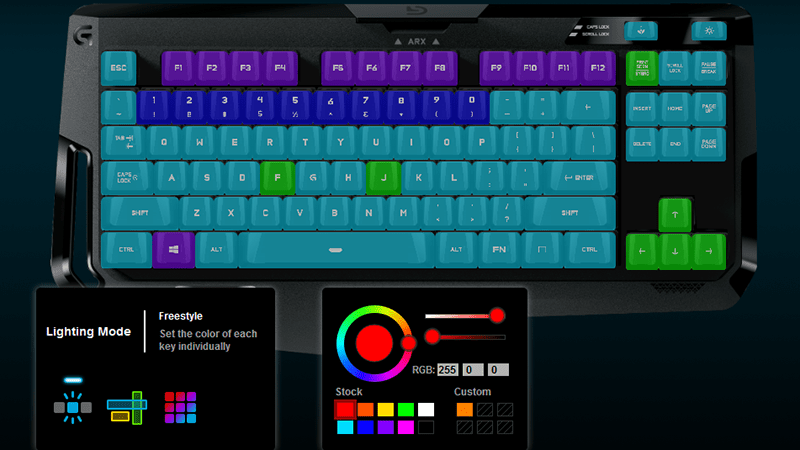 Are light-up keyboards with customisable colour schemes functionally pointless? Yes. Are they badass? Also, yes. Logitech and Razer both have gorgeous hardware, so customising the colour scheme to suit your style makes a lot of sense. However, colour options vary greatly from product to product. Some peripherals can only change the lighting colours of the device as a whole, while others can change colours on a per-key basis, which is even cooler.

Understandably, the hardware with the most customisation options are also the most expensive. We’ll look at the differences in how each platform handles colouring, but keep in mind not all devices will have all of the features described here. That being said, here are some of the key differences:

On pure colour customisation power, Razer wins, but both platforms are pretty stellar. Personally, I think there’s a limit to how much colour customisation I really want to do. On my own keyboard, I use a mostly blue colour scheme, with a few important keys highlighted so I can find them more easily in my peripheral vision. I don’t need a rainbow effect that ripples outward from every key I press. However, for those who like to trick their hardware out, both are pretty awesome.

The Winner: It’s All About Your Preferences

If you’re looking into gaming peripherals, you probably have some pretty specific needs. Fortunately, Logitech and Razer have pretty comparable feature sets. It’s the minor details that can be the determining factor in your preference. For example, in my case, I need commands where I can easily paste blocks of text, sometimes using non-standard characters, I want on-the-fly macro recording with dedicated buttons, and I create a library of macros I can search later. For me, Logitech is the clear choice. If you want a bit more colourful flair from your hardware, prefer to finely tune shortcut profiles per device, or want to sync your profiles between devices, Razer is what you want. Ultimately, it all comes down to preference and both are awesome options.