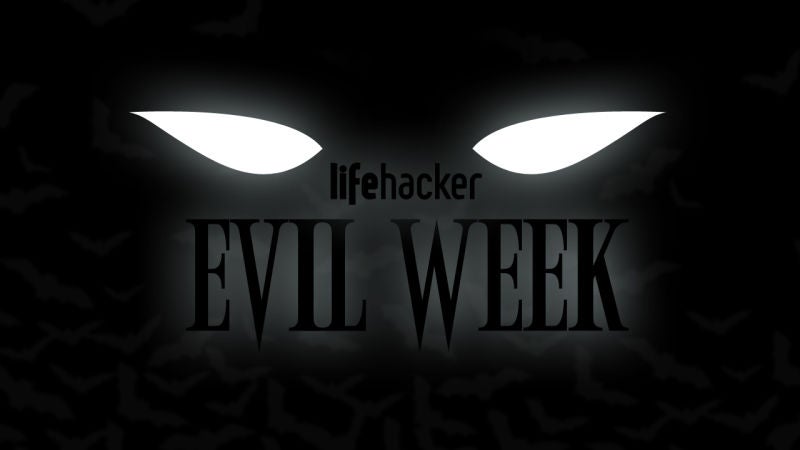 Last week, we explored the darker side of life hacking. For those who missed out, we’re assembled every naughty post in one place. It’s all here — from remotely monitoring someone else’s computer to farting in public undetected.

Become A Better Liar By Creating A Fake Tell
Getting rid of your tells is hard to do, assuming you even know what they are. If you want to be a better liar, however, you can create a fake tell so others can’t figure out when you’re actually lying.

‘Got This Thing’ Fills Your Schedule So You Can Back Out Of Any Commitment
If you have some commitments and obligations you just don’t want to do, you’ll need a decent excuse to get out of them. Got This Thing can fill up your Google calendar with real events around you so you can show people you’re way too busy to do whatever it is they’re asking.

How To Master The Art Of Looking Busy
Looking busy has a bad rap. Sometimes you have to look busy so you can actually work on the things that matter. Here’s how to trick others into believing you’ve got a full plate so you’ll get the breathing room to actually get things done.

Most Hotel Safes Have A Hidden Lock That’s Easy To Break Into
A hotel room safe is designed to keep valuables like your passport or cash locked away while you’re travelling. But as it turns out, most hotel room safes are relatively easy to break into, so you might want to think twice about where you stash your most valuable items.

Sick Of Your Partner’s Crap? The Breakup Shop Will Dump Them On Your Behalf For $10
The Breakup Shop is an online service that takes “ghosting” to a whole new level. For a fixed fee, its staff members will perform breakups through texts, emails, letters or phone calls on your behalf. In the words of the company: “Let us handle the messy work of the breakup so you can spend more time swiping right.” Classy.

Three Ways To Remotely Monitor Someone Else’s Computer
Spying on someone’s computer is bad. As in “go to jail” bad. However, there are a few very narrow exceptions, like monitoring your kids or employees. If you fall in this category (or just want to know how someone might be monitoring you), here’s how.

How To Pass Off Store Bought Food As Your Own
Flatulence is perfectly natural, but when it happens in public, you’d do anything to avoid the embarrassment. Whether they’re silent and deadly or loud and proud, here are the most dastardly ways to pass gas around others and slip away like a fart ninja.

5 Horrible Things To Do While Borrowing Your Friend’s Phone
We all know the moment. Your friend’s phone is sitting, unprotected, unguarded, just waiting to be used for a little mischief. You know you should take this opportunity to do something with it, but inspiration rarely hits until it’s too late. Of course you could snoop through their texts and private Facebook messages, but that’s a little too sociopathic even for Evil Week. Instead, here is some of the best mayhem you can cause with just a few minutes on someone’s phone, with far less chance of ruining your friendship.

The Best Productivity Tricks Used By Evil Dictators
History is full of evil dictators, and while the had their share of bad qualities, it’s undeniable they were efficient at getting things done. Here’s what we can learn from them, despite their evil nature.

The Creepiest Things You Can Do On Facebook
Sometimes in this world, you want to make someone as wildly uncomfortable as humanly possible. That’s why Facebook’s here.

Make A Tripwire Alarm With A Basic Mousetrap
Flatulence is perfectly natural, but when it happens in public, you’d do anything to avoid the embarrassment. Whether they’re silent and deadly or loud and proud, here are the most dastardly ways to pass gas around others and slip away like a fart ninja.

How To Fart In Public And Get Away With It
Remember when Anonymous threatened to destroy the entire internet? We laughed and ultimately their words were just hacker hubris. But it got us thinking — could someone actually destroy the internet? We did some digging, and guess what: with enough effort, the entire thing can be shattered. Physically. Completely. Here’s how to kill the internet.

How To Get Into A Private BitTorrent Tracker Or Usenet Indexer
When it comes to sharing files on BitTorrent and Usenet, it doesn’t get any better than private trackers and indexers. But by definition, they’re very exclusive, so you can’t just waltz in the front door. Here’s how to get access to the best private file sharing communities.

Three Evil Skills I Learned In Childhood That Come In Handy As An Adult
The first evil skill I acquired was subterfuge. Trying to deceive my parents is one of my earliest memories. I escaped from my crib by removing one of its loose bars and then, after climbing out, put the bar back in — as if to trick my parents that I was still in there.

Top Ten Careers That Attract Psychopaths
If you’ve been in the workplace for any extended period of time, chances are you’ve encountered a psychopath at some point in your career. Contrary to popular belief, not all psychopaths are serial killers or axe murderers. In fact, only a small majority of psychopaths are actually violent at all. Instead, you’ll find that psychopaths will almost always be superficially charming, yet can prove to be self-serving and callous on closer inspection. Thanks to the specific set of traits that defines psychopathy, they’re far more likely to be drawn to certain careers than to others.

How To Cheat At Board Games
It’s a time honoured tradition that the banker always steals from the bank in Monopoly. Most cheating in board games isn’t anywhere near as brazen. At least, not if you want it to work. Being tricky is tricky. Cheat too often or too heavily and nobody will play with you. Cheat a little and your opponents may not even notice.

How To Use The Returns Counter To ‘Rent’ Stuff From Retail Stores
Stores don’t like it when you buy things that you plan to return, but let’s be honest: most of us have at least considered it once or twice. If you’re going to game the returns system, do it right. Here’s how.

This DIY Sonic Tripwire Alarm Is A Loud, Perfect Early Warning System
Worried someone might intrude on your evil lair? This DIY sonic tripware alarm is easy to build, decently loud, and is perfect for simple hide-and-seek games or establishing a perimeter around whatever you’d like to keep safe.

How To Pick A Lock Using Nothing But Hairpins
You can learn the basics of lock picking from a GIF, but for a more nuanced look at the techniques required to actually get a lock open without the key, check out NightHawkInLight’s latest tutorial where he uses nothing but a pair of strategically bent hairpins in the process.

Swipe And Shot: The Tinder Drinking Game
Tinder can be great for a quick hook-up, but more often than not it’s a never-ending trawl through photos that make you wonder what exactly they were thinking. Swipe for long enough and you’ll start to notice a distinct theme — so what better way to celebrate the demise of modern dating culture than with a drinking game?

How To Create An Untraceable Messaging Device With An Old Phone
Secret, anonymous messages aren’t just for the dastardly. Luckily, a little privacy isn’t difficult to get. With some effort and a spare phone, you’ll be whistleblowing, protecting your privacy from harassers, and staying anonymous when selling on Gumtree or looking for dates on Match. Here’s how.

How To Sabotage Your Relationship And Get Them To Break Up With You Instead
We know a lot about what makes relationships work — and fail. If you’re too much of a wuss to break up with someone yourself, here’s how to do the exact opposite so they will break up with you.

When Being Bad In Video Games Is Better Than Being Good
Many modern video games present the player with narrative choices that affect the outcome of the story and the fate of supporting characters. As much as some games give you the choice to be delightfully evil, most people will still feel the urge to do what’s morally right. This is a shame, as being the bad guy often lead to a more satisfying story. Here are some of the top moments where it’s better to make the “wrong” choice.

How To Attend A Sales Pitch Just For The Free Gift
There’s a reason the words timeshare and scam often go together: in most cases, buying a timeshare is a bad financial decision. Because of their notorious reputation, timeshare companies tempt you with freebies like dinner vouchers, concert tickets, or awesome vacations. All you have to do is survive a gruelling, high-pressure presentation. If you like playing with fire, here are some tips for making it to the other side without caving — and with your free gift.

Four Sneaky Ways To Trick Your Enemies Into Becoming Allies
Keep your friends close, and your enemies closer. You may not like them, but that doesn’t mean they can’t be useful to you — or at least kept at bay. Here are four clever psychological tricks to turn them into allies.

Most Hotel Safes Have A Hidden Lock That’s Easy To Break Into
A hotel room safe is designed to keep valuables like your passport or cash locked away while you’re travelling. But as it turns out, most hotel room safes are relatively easy to break into, so you might want to think twice about where you stash your most valuable items.